Forty-six years ago, Faust released their critically acclaimed, groundbreaking, genre-melting eponymous debut album in 1971. The innovative and imaginative music on Faust was unlike anything else that was being released in 1971. Musically, Faust was a breath of fresh air, which was hailed as a revolutionary album that had the potential that to transform the future of rock music. However, Faust failed to find the audience that it deserved. Just like Can, Cluster and Kraftwerk, it seemed that Faust’s music was way ahead of the curve. Despite this, Faust continued to release albums of groundbreaking music, and are still doing so five decades later. However, it’s not all been plain sailing for Faust.

Far from it. In true rock ’n’ roll style, Faust have had their moments over the past forty-six years. There’s been breakups reunions and countless changes in lineup. To further complicate matters, since 2005, there’s been two different versions of Faust tour and recording.

This came about in 2005, when two of the original members of members of Faust, drummer Werner “Zappi” Diermaier and art terrorist Jean-Hervé Péron decided to form a new Faust with Olivier Manchion and Amaury Cambuzat of Ulan Bator. Each version of Faust would concentrate on different aspects of the original group.

Since 2005, the two versions of Faust have coexisted, and continued to tour and release new albums. The most recent album baring the Faust name is Fresh Air, which was released by Hamburg based Bureau B. Fresh Air was recorded by Werner “Zappi” Diermaier and Jean-Hervé Péron version of Faust.

While Werner “Zappi” Diermaier and Jean-Hervé Péron’s version of Faust started off as a quartet in 2005, it was a very different lineup that recorded Fresh Air during March and April 2016. By then, Faust were reduced to a trio, that included Werner “Zappi” Diermaier, Jean-Hervé Péron and Maxime Manac’h. The three members of Faust embarked upon an American tour, where they sought to also record their new album.

In typical Faust style, Fresh Air wasn’t going see the three members of the band head into studios during their twenty-eight day tour of America. It began in March and finished in April 2016. During the two months spent in America, Faust were looking to communicate with some of their musical friends and also, the audience.

As the tour began in March 2016, Faust’s musical friends and members of the audience played their part in the recording Fresh Air as the tour mades its way across America. Recordings took place at A1 Nico Studio in Austin in Texas, WPNU in New Jersey and CalArts in Los Angeles. Gradually, Faust gathered material for Fresh Air.

They recorded Barbara Manning in a live lecture, and wave-maker Ysanne Spevack as she played the viola. One night, Faust had the audience rewrite an updated versions of Marseillaise for the track Chlorophyl. For the title-track a poem that was written by a French school friend of Jean-Hervé Péron, which was translated into Polish and recited. To this, Jean-Hervé Péron adds a political reading and sobs, as if he’s been robbed of Fresh Air. By the end of the tour in April 2016, Faust had recorded plenty of material for Fresh Air.

There was still work to do before the album was ready for release. Playing an important part in the recording of Fresh Air was Jean-Hervé Péron’s now legendary database of field recordings. They would add texture to the recordings, and add nuances, subtleties and surprises. These field recordings would become part of the rich tapestry that became Fresh Air. So would the contributions of guest artists that was overdubbed on Faust’s return home to Berlin. This included Jürgen Engler of Die Krupps who appears on La Poulie. He’s one of nine guest artists who join Faust on Fresh Air. Eventually, the album was completed, and a new chapter in Faust’s forty-six year career was about to unfold with the release of Fresh Air.

Fresh Air opens with the seventeen minute title-track. Just a drone accompanies a poem, before scratchy, otherworldly strings quiver and shiver. Gradually, the strings soften and dominate the arrangement. While the poem is still audible, strings, a drone and Eastern sounds are to the fore. They grown in power, adding an element of drama as an ethereal vocal joins the multilayered soundscape. It adds a new dimension, as the drone, otherworldly strings and found sounds unite. Soon, a bell rings as the soundscape changes. The music changes from shrill and cinematic to dark, discordant and dramatic. Sometimes, it’s eerie and otherworldly as Faust fuse elements of avant-garde, experimental,Krautrock,  modern classical and Musique Concrete. Later, the ethereal vocal returns adding a contrast, as the soundscape takes on an industrial influence. By then, there’s an urgency as machine gun drums pound and accompany the spoken word vocal during the dramatic, thunderous and mesmeric arrangement. Blistering effects laden, rocky guitars join thunderous drums as the arrangement takes on a life of its own, almost overpowering the spoken word vocal. It struggles for Fresh Air as the arrangement jangles, whines and reverberates as it powers along. Meanwhile, Jean-Hervé Péron makes an impassioned plea for Fresh Air, as this groundbreaking, genre-melting epic reaches a crescendo.

Partitur is just twenty-two seconds long, but features a recording of a Barbara Manning lecture. This is no droning lecture though. Instead, it’s more like enthusiastic audience participation, which is accompanied by drums.  All too soon, though, this fascinating Faustian musical experiment is over.

A bass is played confidently and quickly on La Pouli, before  features just a bass before a variety of sounds are being added. Meanwhile, Zappi adds a mesmeric beat, as crackling, whining and buzzing sounds accompany Faust’s rhythm section. It never misses a beat, while futuristic and sci-fi sounds are added to the soundscape. So to is Jürgen Engler’s impassioned message, which is the final piece of the musical jigsaw. Later, Faust kick out the jams, and fuse elements of Krautrock and space rock. Effects laden scorching guitars join with the rhythm section and sci-fi sounds. Although the vocal makes a brief reappearance, mostly, though, it’s the original rock ’n’ roll reengages, rocking, and rocking hard as they play with enthusiasm and invention.

For Chlorophyl, Faust had the audience rewrite the Marseillaise. The result was a hymnal about a world collapsing in disarray. Hypnotic drums and percussion set the scene for Jean-Hervé Péron’s spoken word vocal. It gives way to Barbara Manning’s vocal as the rhythm section lay down a tight, mesmeric groove and jarring, screeching and whining sounds flit in and out. So does the spoken word vocal. Meanwhile  the vocal and sultry jazz saxophone compliment each other perfectly. Especially as the drama builds, and the vocal is accompanied by sci-fi sounds. Still the saxophone rasps as the rhythm section provides a mesmeric backdrop and accompanies Jean-Hervé Péron’s impassioned spoken word vocal. Later, a myriad of beeps, bleeps and squeaks as Ulrich Krieger’s saxophone unleashes a blistering solo, as this ambitious and thought-provoking mixture of music, dialogue and social comment reaches a ruminative ending.

Closing Fresh Air is Fish, where Faust remember their turbulent teenage years. It’s another cinematic soundscape, where Faust’s rhythm section combine with growling drones and otherworldly strings. They provide the backdrop for Jean-Hervé Péron’s impassioned spoken word vocal. Later, a rueful horn plays, and heads in the direction of jazz while strings are plucked, a drones buzzes and the rhythm section provide the heartbeat. By now, Faust and friends are tugging at the heartstrings with a soundscape that’s wistful, thought-provoking and powerful. It lasts eleven minutes, which allows Faust to sculpt an emotive and innovative soundscape where Faust put forty-six years of experience to good use. They seemed to have kept the best until last on their new album Fresh Air.

A new Faust album has always been something to celebrate. Fresh Air is no different, and features sonic explorers Faust continuing to combine disparate musical genres ad the push musical boundaries to the limits. To do this, Faust enlist a few friends who help them fuse disparate musical genres. Everything from avant-garde, electronica, and experimental, to industrial, Krautrock and modern classical through to Musique Concrete, rock and space rock. The result is Fresh Air another album of groundbreaking soundscapes from Faust which is without doubt, one of their finest albums of recent years.

For newcomers to Faust, the Fresh Air, which was recently released by Bureau B, is the perfect introduction to of one of the greatest bands of the Krautrock era. After Fresh Air, newcomers are advised to start at the beginning with, their 1971 groundbreaking classic debut album Faust. It marked the debut of a pioneering group who incredibly, were once accused of being mere dilettantes. How wrong were these misguided souls.

The truth was, that Faust were misunderstood, especially in their home country. However, in Britain and France, record buyers embraced, appreciated and understood Faust’s music. Eventually, so did German record buyers. Now forty-six years later, after Faust released their classic eponymous debut album, they’re regarded as one of Kings of Krautrock, who belong at the top table of German music, where they deserve to rub shoulders with Can, Cluster, Kraftwerk, Popol Vuh and Tangerine Dream. A reminder of what that is the case is Fresh Air, which features the welcome return of sonic pioneers, Faust 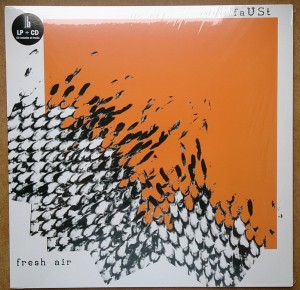