Four years after releasing their debut album A Word Of Science: The First and Final Chapter in 1991, Nightmares On Wax returned with their much-anticipated and critically acclaimed sophomore album Smoker’s Delight. It was released on the ‘24th’ of October 1995 by Warp and awas part of the soundtrack to many people’s lives in the mid-nineties. However, the Nightmares On Wax story began in Leeds, in the late-eighties.

DJ and producer George Evelyn, was born in Leeds, in Yorkshire, and  growing up, his father and sister introduced him to the soul music of Curtis Mayfield and Quincy Jones. This love of soul music would become apparent in his DJ sets and his work as a producer.

So would his love of hip hop, which he later discovered. Tracks like The Sugarhill Gang’s Rappers delight and Malcolm McLaren and The World’s Famous Supreme Team’s Buffalo Gals became favourites and would influenced George Evelyn when he embarked upon his production career.

In 1988, in Leeds, he founded Nightmares On Wax with John Halnon. Later, the pair were joined by Kevin Harper. They released their debut single a year later.

By then,  Nightmares On Wax had signed to the Warp label, and late in 1989, released their debut single Dextrous. Little did George Evelyn realise that he would still be signed to Warp in 2020.

Nightmares On Wax returned with their sophomore single Aftermath #1 in 1990. It found George Evelyn and Co. digging deep into their record collections and sampling Cuba Gooding’s Happiness Is Just Around The Bend and Newcleus’ Jam On It. Sampling would play an important part in the group’s sound over the next few years.

A Word Of Science: The First and Final Chapter.

Despite Nightmares On Wax being a trio, A Word Of Science: The First and Final Chapter was the work of George Evelyn. However, the other members of the group promoted and toured the album.

It was released on September 1991 and featured  Nightmares On Wax’s mellow, laidback and smokey fusion of funk, hip hop and soul as well as elements of house and techno.  The result was very different from previous releases from the group, and some critics didn’t know what to make of the album? Reviews were mixed and the album failed commercially. Since then, A Word Of Science: The First and Final Chapter is regarded as an underrated album in Nightmares On Wax’s back-catalogue.

A Word Of Science: The First and Final Chapter, especially the track Night’s Interlude also laid the foundations for the group’s next two albums Smoker’s Delight and Carboot Soul. 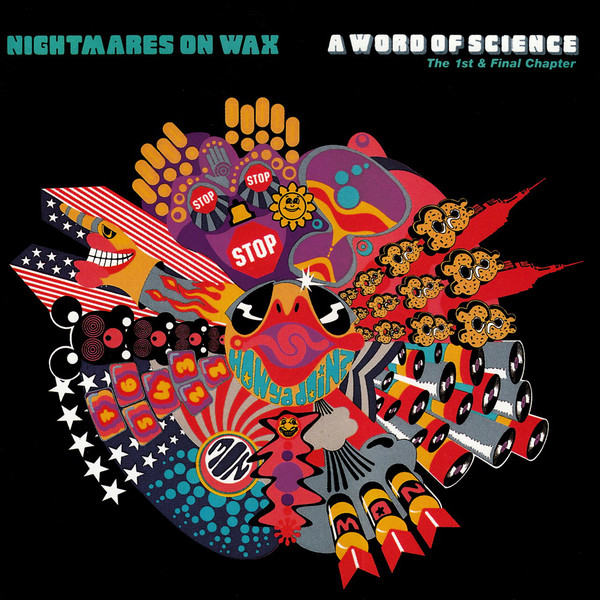 Following the release of A Word Of Science: The First and Final Chapter Kevin Harper left Nightmares On Wax to concentrate on his DJ-ing.

In 1992, Nightmares On Wax returned with two singles. Neither Set Me Free nor Happiness were taken from their debut album.  It looked as if the release of this new material  was the start of a  new chapter for the group. Sadly, that wasn’t the csae.

Alive was released in 1994 and marked the return of Nightmares On Wax. They were back to stay and would released their debut album Smoker’s Delight the following year 1995.

Smoker’s Delight was much-anticipated and released to widespread critical acclaim on the ‘24th’ of October 1995 and reached eighty-four in the UK. It was the album that featured Nightmares On Wax’s trademark trip hop sound that was much-admired and copied by many.

To create Nightmares On Wax’s trip hop sound on Smoker’s Delight, George Evelyn wove what can best be described as a musical tapestry. He combined  elements of funk, soul,  jazz and hip hop with dub, electro, easy listening and cinematic sounds. There’s even detours via electronic, jazz funk and Latin music as well as the unmistakable sound of warn vinyl and a number of samples.

This includes Quincy Jones’ Summer In The City on the album opener Nights Introlude. The Dells were sampled on Love Is Missing From Our Lives on Me and You, and Smokey Robinson’s Just My Soul Responding on (Man) Tha Journey. Sample spotters will have heard Positive Force’s We Got The Funk on Bless My Soul and finally, a sample of Bob James’ Fireball on Mission Venice. These samples played their part in what was hailed as a trip hop classic upon its release.

That was apparent from the opening bars of Night’s Introlude, four glorious minutes of symphonic and cinematic chill out. Dreddoverboard starts off  laidback before revealing its secrets and becomes soulful, funky sometimes hypnotic. It gives way to the mellow and mesmeric Pipes Honour as it meanders memorably along soothing even the weariest of souls. Me and You is a slice of smith and slinky downtempo music that is over all too quickly.

Very different is Stars which is another track that gradually unfolds. Soon, pounding drums,  a probing bass and percussion combine as this captivating and carefully crafted genre-melting track unfolds as hip hop, electronica, funk, jazz and soul melt into one. Wait A Minute finds George Evelyn combining snippet of dialogue with elements of funk, acid house, gospel and soul. The result is a track that sounds as if it’s a missing track from Primal Scream’s Screamadelica.

It’s all change on Groove Street which is dark, hypnotic and cinematic with surprises aplenty during this multilayered track. It gives way to Time (To Listen) a short dramatic cinematic snippet. Then (Man) Tha Journey veers between funky,  joyous and uplifting as Nightmares On Wax fuse elements of soul, funk, easy listening, dub and hip hop to create a dancefloor friendly track for B-boys and girls.

Bless My Soul features a sample of Smokey Robinson’s Just My Soul, and is another carefully crafted track. George Evelyn combines hip hop,  soul, dub and the sample with a whispery vocal to create a truly memorable track. As it fades away Cruise (Don’t Stop) unfolds, and is full of twists and turns and seamlessly disparate genres melt into one during this seven minute epic.

The cinematic sounding Mission Venice sounds as it should be part of the soundtrack to a French film from the late-sixties or seventies. What I’m Feelin (Good) is a joyous sounding track that is the perfect soundtrack to lazy days lying on a beach watching the world pass by. Rise is a beautiful meandering track that epitomises everything that is good about Nightmares On Wax’s mellow downtempo sound. It’s so good it’s followed by Rise (Reprise). Then the spacious sounding Gambia Via Vagatorbeach ambles along and closes Smoker’s Delight.

While Smoker’s Delight received critical acclaim  upon its release, Nightmares On Wax’s sophomore album is now regarded as a trip hop classic. It’s one of the most important albums in the genre’s history, and so was the followup Carboot Soul. These two albums were Nightmares On Wax’s finest albums, and were career defining for George Evelyn. He never bettered these albums despite releasing five further albums.

For record buyers in 1995, Smoker’s Delight was a gamechanger of an album and became part of the soundtrack to their lives. It was an album that people could listen to all day, and with each listen they would hear some subtlety or nuance. Disparate genres and musical influences were part of Nightmares On Wax’s musical tapestry on Smoker’s Delight. Sonically this genre-melting album of music was vibrant and a mini masterpiece that was almost flawless. The music on Smoker’s Delight is captivating, sometimes cinematic or sun kissed and always enchanting as it  weaves its spell and bring back memories for seventy-four magical minutes.