Nowadays, there aren’t many compilation series’ that are still going strong after thirteen years and thirteen volumes. However, Jazzman Records’ critically acclaimed compilation and commercially successful Spiritual Jazz seems to be going from strength-to-strength. Recently, the label released Spiritual Jazz 13: Now! Part One and Two which are the latest instalments in a series that began in 2008.

The story began with the release of Spiritual Jazz (Esoteric, Modal and Deep Jazz From The Underground 1968-77) in 2008. This was the first instalment in what would eventually become their longest-running and most successful compilation series.

Between 2009 and 2020 they’ve released compilations of European, Islamic, Japanese and vocal spiritual jazz. They also turned their attention to some of the most important and prestigious jazz labels and dug deep into the vaults of Blue Note, Prestige and most recently Steeplechase and Impulse! By then, there were twelve instalments in the  Spiritual Jazz series and critics wondered what next?

Many thought that another compilation from one of jazz’s legendary label would follow. That wasn’t the case and instead, Jazzman Records decided to bring the series up-to-date with the release of Spiritual Jazz 13: Now! Part One and Two.

Opening Spiritual Jazz 13: Now! Part Two is the Canadian octet The Cosmic Range who released the album The Gratitude Principal in 2019. It featured Palms To Heaven which is a groundbreaking yard that’s dense and  lysergic sounding. It sounds as if it’s been influenced by African music, free jazz and classic spiritual jazz. This is the perfect way to open the compilation and sets the bar high.

Vibration Black Finger released their eponymous EP in 2015 and it featured a genre-melting cover of Brandon Ross’ Empty Streets. Playing a leading role is Ebony Rose’s vocal which is guaranteed to grab the listener’s attention. Meanwhile,  the carefully crafted arrangement veers between haunting and edgy to dark and cinematic. This track is an oft-overlooked hidden gem and is a welcome addition to the compilation.

Slow Sweet Burn was recorded in 2013 by the David Boykin Experience and then Abeeku added his vocal. He’s lives in the South Side of Chicago and has been part of the Windy City’s vibrant music scene for many years. There’s an intensity and energy to his music which is thought-provoking and powerful as he address inequality and other social issues. However, many people won’t be aware of Abeeku’s music and this is the perfect introduction to a man whose much more than a musician.

Wildflower recorded Flute Song live in Finsbury Park, London in 2017. Just like so many of the artists on the compilation they combine an eclectic selection of musical genres. This includes from Afrobeat and jazz during what’s an impassioned and captivating performance.

The Pyramids were originally founded by Idris Ackamoor in the seventies, and made a comeback in 2011 when they released the album Otherworldly. One of the highlights was Memory Ritual which features a masterclass from bandleader and saxophonist. He played a leading role on a tracks that veers between uplifting and emotive to laidback and ruminative and is always melodic and memorable.

In 2005, the Steve Reid Foundation recorded For Coltrane for his album Spirit Walk which was released on Soul Jazz Records. The veteran American drummer’s playing is expressive and bristling with energy and emotion as he leads a band who unleash a series of flamboyant flourishes  as they pay homage to the founding father of spiritual jazz.

Ever since the fifties, Italy has had a vibrant jazz scene. In 2001, alto saxophonist Carla Marciano recorded her album Trane’s Groove. It was released the following year on CAM Jazz, and one of the highlights was the title-track, which has obviously been influenced by John Coltrane’s classic album A Love Supreme.

In 2109, vocalist and multi-instrumentalist Angel Bat Dawid recorded her album The Oracle on her cell phone. It featured What Do I Tell My Children Who Are Black (Dr Margaret Burroughs) where she combines an understated ruminative arrangement where an electric piano accompanies her heartfelt, impassioned pleas for social justice. Later, vocal is transformed as it reaches an operatic crescendo which is the perfect way to conclude such a powerful and moving track.

Over the last few years, Menagerie who are led by composer and guitarist Lance Ferguson have been a familiar face on the Australian jazz scene. In 2017, they released their album Arrow Of Time on Freestyle Records.  It features Nova a piano-led track where this talented and versatile group showcase their considerable skills on what’s one of the highlights of the compilation.

Avo’s Tune is taken from the Teemu Akerblom Quartet eponymous debut album which was released in 2015. It features some breathtaking interplay between the flute and tenor saxophone as the rhythm section underpin the arrangement. It’s also further proof of how strong the Finnish jazz scene is.

Vessels featured on The Jamie Saft Quartet’s 2018 Blue Dream. The American pianist leads his band as they play with power, passion and an intensity. Especially tenor saxophonist Bill McHenry who draws inspiration and pays homage to the greats of spiritual jazz.

Closing Spiritual Jazz 13: Now! Part Two is Jonas Kullhammar’s Paris. It’s taken from the soundtrack to Gentlemen which was released in 2014. It’s a quite beautiful and is also wistful, ruminative and cinematic  sounding track that paints pictures in the mind’s eye.

Just like Spiritual Jazz 13: Now! Part One, Part Two  shows that jazz in its various forms is in a  healthy state. There’s contributions from musicians and groups from Africa, America, Australia, Britain and Europe whose  music is ambitious and innovative as they continue in there quest to push musical boundaries. To do that, they  fuse disparate genres and sometimes, draw inspiration from the pioneers of spiritual jazz including its founding father John Coltrane.

Many of the artists on Spiritual Jazz 13: Now! Part Two will be new to many music fans and the compilation is the perfect introduction to their music. This could be the start of a musical voyage of discovery and an introduction to a new generation of musicians and some familiar faces who are recording and releasing spiritual jazz. A tantalising taste can be found on Spiritual Jazz 13: Now! Part Two which is another welcome addition to Jazzman Records’ long-running, commercially successful and critically acclaimed compilation series. 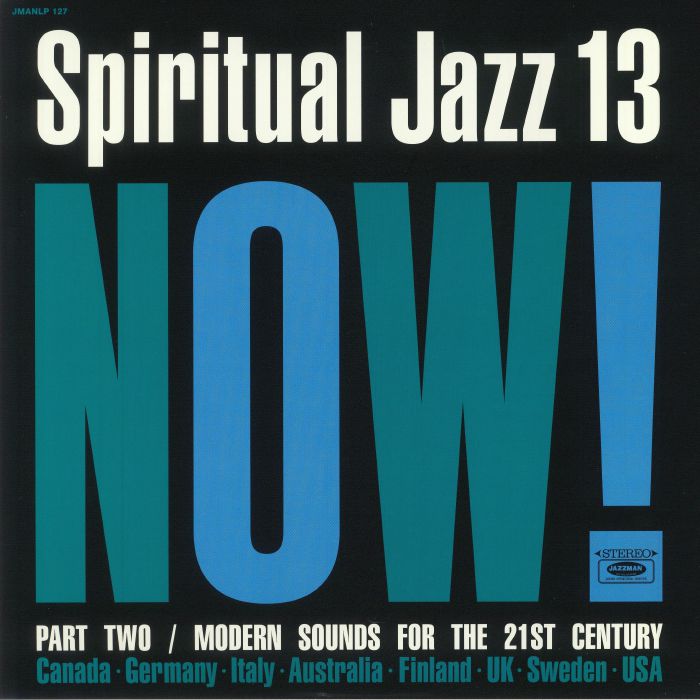