CLASSIC ALBUM: BOB MARLEY AND THE WAILERS-CATCH A FIRE.

Classic Album: Bob Marley and The Wailers-Catch A Fire

Having signed to Chris Blackwell’s Island Records, The Wailers released their fifth studio Catch A Fire on April the ‘13th’ 1973. The first 20,000 copies came encased in Rob Dyer and Bob Weiner’s now famous Zippo lighter’ hinged album sleeve. However,  Island Records had underestimated demand for what was a landmark album and 14,400 copies sold in the first week. More copies of Catch Of Fire were ordered after a rethink.

When the new copies of Catch A Fire hit the shops, the album had a new cover designed by John Bonis which featured Esther Anderson’s portrait of Bob Marley smoking a spliff. This wasn’t the only change to the album cover. The group was no longer billed as The Wailers. Instead, Catch A Fire was credited to Bob Marley and The Wailers.

Poet, philosopher and political activist are words that describe Bob Marley who was born on the ‘6th’ February 1945, in Nine Mile, Saint Anne Parish, Jamaica. During his life, he was someone who spoke up for the Jamaican people, and sadly this sometimes  put his life in danger. Despite this, he was determined to be a force for good and peace. Religion played an important in his daily life and he was a deeply religious and spiritual man. Bob Marley was a devout Rastafarian and his religion influenced the music he made.

Back in the 1970s, Bob Marley was hugely influential and increased the popularity of reggae. Before that, although reggae hadn’t crossed-over and gained mainstream appeal. Bob Marley were instrumental in raising reggae’s profile. Especially his Island Records debut Catch A Fire which was the album that launched and transformed Bob Marley and The Wailers’ career and was their debut album for a major record label.

Catch A Fire was Bob Marley’s first album for his new record label Island Records, which was owned by Chris Blackwell. The pair had first met in London in 1972, when Bob Marley and The Wailers were stranded in London.

Now that Bob Marley and The Wailers had the funds to record a new album they headed for Harry J’s recording studio in Kingston. It had an eight track recording studio which was the type that rock bands were using. Again, this was a first, as previously, no reggae band had used such a facility. However, Chris Blackwell wanted more than a reggae album. He said he wanted: “more of a drifting, hypnotic-type feel than a reggae rhythm.” To achieve this, Bob Bob Marley travelled to London to oversee Chris Blackwell’s overdubbing of the tracks. Chris Blackwell had enlisted the help of two top American musicians, Wayne Perkins and John “Rabbit” Bundrick.

Wayne Perkins was responsible for rerecording some of the lead and rhythm guitar parts while John Bundrick added organ, synths, clavinet and electric piano to the UK mix of the album. Another of Chris Blackwell’s decisions was to lessen the heavy bass sound. Two songs were then left off the album. However, this “new mix” didn’t go down well back in Jamaica. Despite this,  music critics loved the album and it released to widespread critical acclaim. However, the big question was how would the record buying public react to Catch A Fire?

On Catch A Fire’s release in April 1973 it initially sold 14,400 copies in the UK. However, Bob Marley and the Wailers’ Island debut was certified silver and then gold. This was just the start of a glittering career.

Catch A Fire  was the first of six gold discs and one silver disc Bob Marley and the Wailers were awarded in the UK between the release of Catch A Fire In 1973 and Confrontation in 1983.

After Catch A Fire, the band embarked on a period where they released a string of classic albums and suddenly, after many years of trying, Bob Marley and The Wailers, were household names. One thing that saddens many people, is how the original Wailers weren’t part of this success story. They had split up in 1973, tired of struggling for success. Little did they know in 1973, that success was just a year away.

One of the attractions of Catch A Fire for critics and music fans alike were Bob Marley and Peter Tosh’ lyrics. Peter Tosh penned 400 Years and Stop The Train, while Bob Marley wrote the other seven tracks. Both Peter Tosh and Bob Bob Marley were both socially aware and militant and weren’t afraid of raising subjects and issues that would be deemed confrontational and controversial. Both wished for a future where people in Jamaica, and elsewhere, would be free from oppression. Other times, their view of the world was an optimistic one, and this is apparent in the music on  Catch A Fire which would eventually be regarded as a classic album.

Catch A Fire opens with Concrete Jungle. It begins somewhat hesitantly, with a guitar, rhythm section and organ combining. Quickly, the arrangement opens out and it’s tough and edgy as pulsating rhythms emerge and Bob Marley  delivers a heartfelt, frustrated vocal. Behind him, the arrangement has an understated quality, with a bass reverberating, an organ gently playing and drums steadily keep the beat. The arrangement gently pulsates as instruments emerge, join and leaves the mix. A guitar soars, but is then played subtly while a constant is the buzzing bass. Meanwhile, Bob Marley sings about the poverty and conditions faced by people in the poorer areas of Jamaica. His vocal is full of emotion, frustration and sadness as he highlights their plight in this poignant, moving and timeless song.

On Slave Driver Bob Marley’s lyrics tackle the subject of slavery head on. Drums and Hammond organ are accompanied by backing vocals as the track unfolds and the vocal enters. The arrangement is understated and meanders along taking care never to overpower the vocal. This allows the listener to focus on Bob Marley’s vocal and his righteous anger on one of the most powerful songs on Catch A Fire.

The militant Bob Marley can be heard on 400 Years which was written by Peter Tosh. The arrangement has a dark, heavy sound and is very different from the previous tracks. Even the vocal sounds different and  is deeper has an edge to it. Maybe it’s because Bob Marley is  airing his frustration and anger? Meanwhile, the the arrangement is fuller as the buzzing bass returns and  is accompanied by drums and guitar. Backing vocals are provided by The Wailers who provide the perfect accompaniment to Bob Marley’s vocal which is impassioned but full of frustration and despair

One of the best known songs on the album is the Peter Tosh composition Stop the Train I’m Leaving. Drums almost crack as they combine with the guitar and melodic sounding Hammond organ which meanders in and out of the track. Bob Marley’s vocal sounds strong, yet relaxed and heartfelt as sits atop the arrangement. Behind him, one of the best arrangements on the album is emerging as a chiming guitar, throbbing bass, subtle drums and a dreamy melodic Hammond organ combine with a powerful and charismatic vocal. It’s a potent combination is one of the highlights of Catch A Fire.

On Baby We’ve Got A Date (Rock It Baby) give a  glimpse of Bob Marley’s romantic side on this lighter, brighter track. This is apparent when the organ plays, gently and melodically. Drums play, they’re subtle, similarly, the bass is way back in the mix. They take care not overpower the Hammond organ which is everpresent nor the vocal. It’s tender and heartfelt as is accompanied by one of the finest arrangements on the album. The female backing vocalists provide the perfect accompaniment on a beautiful romantic ballad.

Stir It Up is one of the tracks Chris Blackwell changed by bringing in Wayne Perkins to redo the lead guitar on the track. As the rhythm section opens this track, a bass reverberates and drums play. They’re joined by the guitar while the bass throbs way down in the bottom of the mix. Meanwhile, Bob Marley’s vocal sounds lighter and happier as the music is emerges in waves washing over the listener.

Kinky Reggae has a laidback feel from the opening bars. The rhythm section play accompany Bob Marley who is much more relaxed and happier and is accompanied by backing vocalists as he sings lyrics loaded with not so subtle innuendo.

Very different is  No More Trouble where the rhythm  section and backing vocalists accompany Bob Marley’s impassioned and emotive vocal. He sings about peace and a cessation to the war which was tearing his country apart. Behind him, the arrangement veers between understated to dramatic as drums and percussion punctuate the arrangement. Meanwhile, soulful backing vocalists accompany  Bob Marley as he delivers a soul-baring vocal and tries and succeeds in getting his message across.

Midnight Ravers closes Catch A Fire and is another of Bob Marley’s protest songs. Here, he was ahead of his time, when he wrote about the problem of pollution. A drum roll opens the track, a guitar plays, as the song meanders along. Backing singers join in and accompany a vocal that’s saddened by the destruction he’s singing about and its effect on everyone. It’s a powerful song from Bob Marley who was akin to musical a seer with a social conscience.

On its release, it may not have been their most successful album. Eventually though, it was certified silver and then gold and by then, it had launched the career of Bob Marley and The Wailers. It’s also an album that has stood the test of time and the messages within it are just as relevant today, as they were in 1973.

The lyrics on Catch A Fire were socially aware and militant, and neither Bob Marley, nor Peter Tosh were afraid of raising subjects and issues that could be deemed controversial or confrontational. This included subjects like poverty, slavery and pollution all needed to be tackled in 1973. Bob Marley and The Wailers didn’t shy away from doing so, and tackled these subjects head on Catch A Fire.

Bob Marley like Peter Tosh both wished for a future where people in Jamaica and elsewhere would be free from oppression. Their view of the world was also an optimistic one. This is apparent on Catch A Fire. It was an album that featured music with a social conscience and also gave a glimpse of the romantic side of Bob Marley. Catch A Fire showed the different sides to Bob Marley and The Wailers and was the album that launched their career.

That was despite Catch A Fire only selling only 14,400 albums in the UK. Eventually it was certified silver and then gold. By then, it had launched the career of Bob Marley and The Wailers.

Although Catch A Fire didn’t match the success of later albums including  Natty Dread, Exodus and Kaya, it’s one of the most important albums in Bob Marley and The Wailers’ back-catalogue.  Just like the rest of the albums they released on Island, Catch A Fire has been remastered at Abbey Road Studios and reissued to celebrate the seventy-fifth anniversary of Bob Marley’s birth.

For anyone yet to discover Bob Marley and The Wailers’ music, then Catch A Fire is the perfect place to start. It was their first classic album and one of the greatest albums they released during the decade they spent signed to Island. Along with Natty Dread, Exodus and Kaya, Catch A Fire contains some of the best music that Bob Marley and The Wailers’ released during their Island Records years. Catch A Fire is worthy of being called a timeless classic and is powerful and poignant reminder of a musical seer with a social conscience.

Classic Album: Bob Marley and The Wailers-Catch A Fire 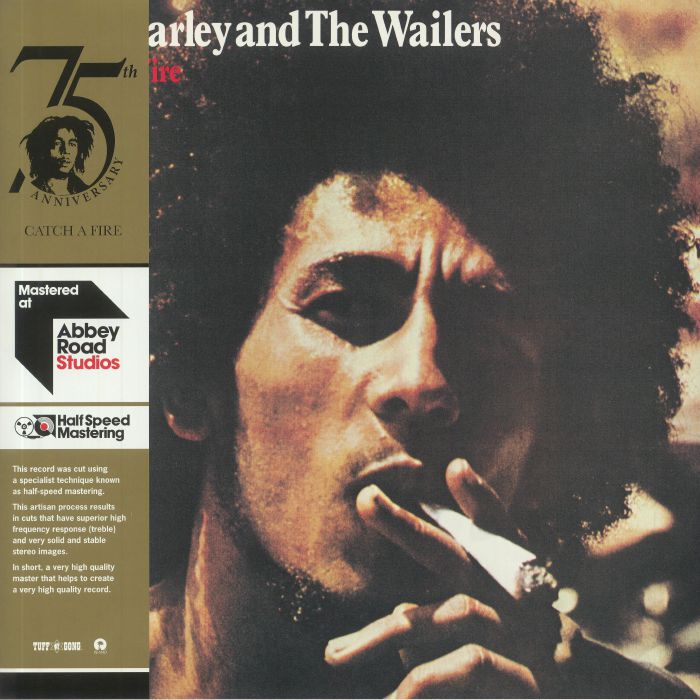