By the late-sixties, jazz was no longer as popular as it had once been. Jazz’s popularity had plummeted over the last few years. Many jazz clubs were  closing, or being converted into venues that put on rock bands.  Sales of jazz were down. Critics and cultural commentators were drawing comparisons with  blues music.

Although there had been a brief resurgence in the blues popularity earlier in the sixties, many of its biggest names were struggling to eek out a living. They played wherever they could get a gig. Some had even turned their back on the blues. For many it was a worrying time. Part of the problem was, the blues hadn’t really evolved. While the same couldn’t be said of jazz, its popularity was declining, and declining rapidly. Something had to change.

Jazz albums were no longer selling in the same quantities as a decade earlier. Some established labels struggled financially. So did the newer labels, who promised a brave new world in jazz. That didn’t happen. Across America, jazz’s decline was noticeable. Many jazz clubs were now putting on pop and rock groups. Jazz was, yesterday’s music. It was a dying genre. However, had jazz’s demise been overstated?

That proved to be the case. Riding to the rescue, like jazz’s very own caped crusader, came fusion. A mixture of jazz, funk and rock, fusion proved to be jazz’s savour. Maybe just, jazz had a future?

That proved to be the case, with many of the biggest names in jazz embracing jazz. This included one of  the most innovative and influential supergroups of the jazz-fusion era, Weather Report. The most successful period of their career was between 1971 and 1975, when the signed to Columbia. During this period, Weather Report’s lineup and music were both evolving musically.

So Joe Zawinul and Wayne Shorter went in search of a rhythm section. The first musician they brought onboard was Czech bassist Miroslav Vitouš. To complete Weather Report’s lineup, drummer and percussionist Alphonse Mouzon. This quartet were hugely experienced musicians.

Previously, Joe Zawinul had worked with Cannonball Adderley and then Miles Davis, where he met Wayne Shorter. They’d previously been members of Maynard Ferguson’s Big Band. Then Wayne Shorter had worked with Art Blakey. It was after Wayne Shorter and Joe Zawinhul played on Miles Davis’ two fusion albums, 1969s In A Silent Way and 1970s Bitches Brew that they came up with the idea of their own band. Little did they realize that this new band, Weather Report, would go on to record fourteen studio albums and two live albums during their sixteen years together. During Weather Report’s lifetime, the lineup was fluid. However, despite the changes in lineup, Weather Report’s music was always innovative, inventive and influential.  That was case from their 1971 debut album Weather Report.

Start as your mean to go on could and should’ve been Weather Report’s motto. From their 1971 debut album Weather Report, they were innovators, breaking new ground musically. The quartet of keyboardist Joe Zawinhul, saxophonist Wayne Shorter, bassist Miroslav Vitous and drummer and percussionist Alphonse Mouzon were joined by percussionists Don Alias, Barbara Burton and Airto Moreira. Recording took place between 16-22 February and then on 17th March. Eight tracks were recorded, which became Weather Report. This was very different to anything that had gone before.

Abstract, avant garde, abstract and experimental are all words that were used to describe Weather Report. Influenced by Miles Davis’ two fusion albums In A Silent Way and Bitches Brew, Weather Report is variously explosive, intricate, subtle and always, compelling, captivating and innovative. Having said that, Weather Report wasn’t a hugely successful album.

Jazz critics lauded the inventiveness and innovation of Weather Report. Critically acclaimed it was, commercially successful it wasn’t. Weather Report only reached number 191 in the US Billboard 200, but reached number seven in the US Jazz Charts. Often, however, great works of art and music, aren’t recognized straight away. Given how ahead of their time Weather Report were, this was the case here. Their second album I Sing The Body Electric would see a change in fortune for Weather Report.

I Sing The Body Electric.

I Sing The Body Electric, Weather Report’s 1972 sophomore album, saw two new members join the group. They were percussionist Dom Um Romao and drummer Eric Gravatt, who replaced Alphonse Mouzon. Recording took place during sessions in November and December of 1971. I Sing The Body Electric completed in January 1972, when Medley: Vertical Invader, Surucucu and Directions were record live in Tokyo. For the audience attending these concerts, they were able to glimpse the direction Weather Report’s music was heading.

When Weather Report’s sophomore album I Sing The Body Electric was released in 1972, critics and fans heard another side to their music. Weather Report with its new lineup had reinvented themselves and their music. I Sing The Body Electric proved much more popular that their debut album, reaching number 147 in the US Billboard 200. The music appealed to a wider audience, incorporating jazz, rock and electronica.

With five tracks were recorded in the studio, three live and the music was much more complex, eclectic and ethnically diverse. I Sing The Body Electric drew inspiration and influence from a wider range of influences. Music from four corners of the globe, plus electronic instruments and guest artists aplenty, all player their part in I Sing The Body Electric commercial success and critical acclaim. Guest artists included guitarist Ralph Towner and flautist Hubert Law. They played their part in I Sing The Body Electric’s rich tapestry. Intricate, complex, grandiose, forward-thinking, experimental, it was all these things and much more. With two studio albums behind them, Weather Report decided that the next step was the release of the first of two live albums, Live In Tokyo.

Fans of Weather Report had enjoyed a taster of the group’s live sound on I Sing The Body Electric. The last three tracks on I Sing The Body Electric were recorded in Tokyo. Now, fans had the opportunity to hear what Weather Report live sounded like, when a double-album entitled Live In Tokyo, was released later in 1972. For critics and fans alike, they were at last able to hear a four tantalizing sides of a group featuring some of the most talented, inventive and innovative musicians feeding off each other.

Live In Tokyo allowed Weather Report to showcase their inventiveness and innovativeness. There was everything from free form jazz and fusion, which gave way to explosive, then intricate, complex passages of music. Veering into experimental and avant garde, before taking detours into multicultural music and rock, always, the music returns to jazz. The interplay between the members of Weather Report is stunning. It’s as if each member intuitively knows what the other is about to do. They read and anticipate this, responding to what’s gone before with something equally compelling and captivating. Whether the tempo increases or another layer of music is added to the rich, multi-textured tapestry, second guessing Weather Report ins’t easy. Indeed, over two discs of Live In Tokyo, Weather Report demonstrate and reinforce just why, they were such an important, influential and innovative band, who each time they released an album, would reinvent themselves and their music. This would be the case with their third studio album Streeetnighter.

When Streetnighter was released in April 1973, critics and fans hailed the album’s groove oriented sound. As a result, Streetnighter reached number eighty-five in the US Billboard 200, number forty-one in the US R&B Charts and number seven in the US Jazz albums. This was Weather Report’s most successful album. It also marked another change in direction musically for Weather Report.

Andrew White’s electric bass played a much more prominent role on Streetnighter. Miroslav Vitous featured on just two tracks. As usual, for Joe Zawinhul, the groove was key to Streetnighter’s success. So, Andrew White played a huge part. From the opening bars of the thirteen-minute epic Boogie Woogie Waltz, played in 3/4 time and with a glorious Latin sound, Weather Report are in the tightest of grooves, right through to the closing notes of Non-Stop Home. For Joe Zawinhul, Streetnighter was a voyage of discover. He realized he could use his wah-wah pedal with his Fender Rhodes and introduced his ARP synth to add a melodic twist. The other change was in Wayne Shorter’s playing. He’s reined in, his playing much more restrained. It seemed, Streetnighter marked the start of a new era for Weather Report. With another new lineup and having reinvented themselves yet again, what would the future hold for Weather Report on their fourth studio album Mysterious Traveller.

With Miroslav Vitous having left Weather Report, the lineup on Tale Spinnin’ was now Joe Zawinhul, Wayne Shorter and the newest member, bassist Alphonso Johnson. Another new face would feature on Tale Spinnin.’ However, this would just be a walk-on part. It could’ve been much more long term though.

Joe Zawinhul had heard Leon “Ndugu” Chancier playing with Carlos Santana’s band. He’d been hugely impressed with this multitalented drummer and percussionist. Leon was part of Carlos Santana’s band, and was recording in the studio next to Weather Report. He was asked to join Weather Report for a session. This session lasted a week. It resulted in Leon being asked to become a member of Weather Report. He declined the offer, preferring to stay with Carlos Santana. Recording of Tale Spinnin’ took place at Wally Helder Studios in Los Angeles. The sessions started in February 1975 and ended in April 1975. Six tracks were recorded during this two month period, and became Weather Report’s fifth studio album Tale Spinnin.’

Ever since Weather Report released their debut album Weather Report, each of their studio albums had surpassed the success of the previous one. This was the case with Tale Spinnin.’ It proved their most successful album, reaching number thirty-one in the US Billboard 200, number twelve in the US R&B Charts and number three in the US Jazz Charts. Critics and fans alike, took to with Tale Spinnin’s heavier, funkier sound. Key to Tale Spinnin’s success were two new addition’s to Weather report’s lineup.

While Leon filled the drummer’s seat, percussionist Alyrio Lima added an African influence. This replaced the Latin influence of Mysterious Traveller. So, funk, fusion, R&B and rock were joined by African influences. Just like their four previous studio albums, Weather Report continued to reinvent and innovate. Unlike other group’s, Weather Report weren’t content to stand still. Granted, the trademark sound had started to take shape on Mysterious Traveller, but on Tale Spinnin’ evolved. The result was six groundbreaking, innovative and inventive tracks, which became Tale Spinnin,’ Weather Report’s most successful album of their six album career. This was just the start in the Weather Report story, which would see them release another nine studio albums and one more live album.

With Wayne Shorter and Joe Zawinhul at Weather Report’s helm, they fused musical genres and influences, resulting in some of the most groundbreaking, inventive and influential music of the seventies and eighties.  Weather Report were together between 1970 and 1986, and released  fourteen studio albums and two live albums.However, some of the most innovative, inventive and influential music Weather Report recorded and released was between 1971 and 1975, when the Columbia Years were just beginning. 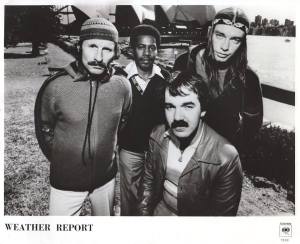 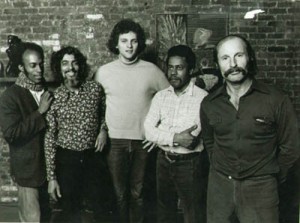 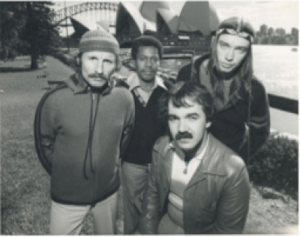