Often, it looks as if a singer is destined for greatness. That was the case with Canadian singer-songwriter Bob Carpenter. He was signed to Warner Brothers in 1974. Straight away, Bob headed into the studio to complete his solo album, Silent Passage, which was rereleased by No Quarter Records on 19th August 2014.

This included saxophonist Don Thompson, Peter Pringle on harmonium, Buddy Cage on steel guitar and Bill Speer on electric piano. Drummer Andy Cree and bassist Skip Beckwith provided the rhythm section on Down Along The Border and Now and Then. Strings were added to several songs and woodwind to Before My Time. It seemed no expense was being spared in the recording of Silent Passage. Warner Brothers looked as if they were fully behind the project. Sadly, that wasn’t the case.

With Silent Passage recorded, Bob Carpenter was ready to release his debut. Now was his chance to enjoy the commercial success and critical acclaim other singer-songwriters were enjoying. Sadly, that wasn’t to be. A contract dispute resulted in Silent Passage being shelved. For Bob this was a huge blow.

For Bob Carpenter his career was almost over before it began. What looked like being a glittering career stalled. It would be ten long years before Silent Passage was eventually released.

It was 1984 before Silent Passage was released on a small, Canadian label, Stony Plain Records. It was a long way from Warner Brothers, a major label. By then, Bob Carpenter had almost given up on music. The belated release of Silent Passage rejuvenated Bob’s interest in music.

Following the release of Silent Passage, Bob was booked to play at several Canadian folk festivals. Bob still had it. He could captivate an audience with his worldweary vocals mesmeric acoustic guitar playing. When he walked on stage, Bob came alive. For as long as he was onstage, the audience were spellbound. However, little did anyone know, that Bob was at a turning point in his life.

This turning point was caused by his interest in Buddhism. Over time, Bob’s interest and commitment to Buddhism grew. So much so, that Bob became a Buddhist monk. This resulted in Bob turning his back on music. Sadly, this time, there would be no comeback.

Tragically, Bob Carpenter died in 1995.  Brain cancer robbed music of one a truly talented singer-songwriter. His only album was Silent Passage, which was belatedly released in 1984. In the last thirty years, Silent Passage has become known as a lost classic. You’ll realise why, when I tell you about Silent Passage.

From the opening bars of Miracle Man, you’re captivated. It’s the perfect way to open Silent Passage. Elements of blues, country and folk melt into one. Bob’s languid, joyous vocal is accompanied by his trusty acoustic guitar. Soon, the rhythm section ands piano join in. Lee Sklar’s bass and Russ Kunkel’s drums drive the arrangement along. Flamboyant flourishes of piano and bottleneck guitar from Lowell George are added. Then there’s backing vocals from Anne Murray and Diana Brookes. They all play their part in this carefree anthem.

Silent Passage has a much more thoughtful, pensive sound. Just keyboards and acoustic guitar accompany Bob’s weary, lived-in vocal. There’s a poignancy to the lyrics as Bob sings “before the war I had no need for travelling.” Now he’s returned home, he’s realised something “it’s only coming back home that brings you nearer.” As he sings those words, strings sweep in. They’re joined by backing vocals from Emmylou Harris. Along with Ben Keith’s steel guitar they’re the finishing touch to one of the most beautiful tracks on Silent Passage.

A haunting guitar reverberates, before Old Friends unfolds. A pulsating rhythm section provide the backdrop to Bob’s vocal. His vocal is a mixture of emotion and sincerity, as he sings about friendship. The way he sings “you’ll never lose a friend,” it’s with real feeling and belief. Soon, washes Hammond organ sweep in. They join the rhythm section. Later, a sultry saxophone is unleashed. Bob whoops as waves of the the arrangement unfold. Cooing, testifying backing vocals join the strings as Bob unleashes a vocal that sincere and soulful. It’s a reminder why he could’ve and should’ve been a huge star.

First Light has a much more understated arrangement. Just a meandering acoustic guitar and washes of Hammond organ combine. This suits the song. It allows Bob’s wistful vocal to take centre-stage. Strings sweep Bob’s vocal away. His vocal sounds not unlike Cat Stevens. Bob’s lyrics remind me of Al Stewart. Just like Al, Bob draws inspiration from history and religion. They’ve a cinematic quality. So much so, that you can imagine the imagery taking shape before your eyes. It’s akin to watching a film unfold before your eyes, with Bob Carpenter playing a starring role.

Just a piano opens Morning Train. It sets the scene for Bob’s weary vocal, as sings about boarding the “Morning Train.” He’s had enough of living the way he is. His partner is out all day, and all night. Finally, he’s had enough. He’s lonely and he thinks about and dreams of catching the “Morning Train.” Strings sweep and swirl, harmonies soar above the arrangement which is driven along by the rhythm section. They provide the perfect backdrop for Bob’s lonely, heartbroken vocal.

The Believer is another track with a minimalist arrangement. Just an acoustic guitar accompanied Bob. His raspy vocal has a lived-in sound. Desperation, sadness and sorrow fills his voice during a song about loneliness and death. One of the most poignant lyrics is “I may not be around tomorrow.” Bob realises the clock is ticking, and has his regrets. One of his regrets is the time he “spent searching for better weather.” Accompanied by lush string pathos is omnipresent during this beautiful and poignant song. Quite simply, it’s one of the highlights of Silent Passage.

Bob’s subtle acoustic guitar wanders across the arrangement to Gypsy Boy. It grabs your attention. So does Bob’s vocal. It’s gritty and raspy, as dramatically, Bob delivers the lyrics. Stylistically, he’s similar to Al Stewart and Bob Franks. Gypsy violins, steel guitar and a twelve-string guitar are joined by percussion. They help Bob paint the picture of the Gypsy Boy. “I am a gypsy boy, I am where you find me” Bob sings with a mixture of controlled power, emotion and drama. It’s a compelling performance.

On each song, Bob starts with the musical equivalent of a  blank canvas. He then starts painting a Picture. That’s what he does on Down Along The Border. His acoustic guitar and then vocal set the scene. Soon, a steel guitar, Hammond organ and lush strings provide a poignant accompaniment to Bob’s raspy, heartfelt vocal.

Before My Time has a country-tinged sound from the get-go. Bob’s vocal is worldweary. He sounds as if he’s lived a thousand lives. You wonder where he been and what he’s seen? This is perfect for the song. The lyrics come to life. Bob takes on the role of narrator. He sets the scene for the listener. So do the strings, electric piano and woodwind. They’re like actors on the stage. However, the person playing the starring role in Bob Carpenter.

Now and Then closes Silent Passage. Firmly and confidently, Bob strums on his acoustic guitar. Soon his wistful vocal enters. It’s different from previous tracks. That’s because the ten songs on Silent Passage were recorded between 1971 and 1974. During that period, Bob’s vocal changed and matured. As Bob’s vocal grows in power, drama and frustration are omnipresent. Framing his vocal are the rhythm section, electric piano, melancholy strings wistful woodwind. They ensure Now and Then proves a powerful and poignant way to close Silent Passage.

It’s forty years since Silent Passage was meant to be released by Warner Brothers. A contract dispute put paid to that. It also put paid to Bob Carpenter’s career.

Ten years later, when Silent Passage was released, Bob was lost to music. He’d fallen out of love with music. After a brief comeback, Bob Carpenter found religion. He became a Buddhist and eventually, became a Buddhist monk. Bob never recorded another album. Tragically, Bob died of brain cancer in 1995. Sadly, Bob Carpenter never got to see Silent Passage become a cult classic.

That’s the best way to describe Silent Passage. It’s a hidden gem of an album that for forty years, lay undiscovered. Recently, however, people have rediscovered one of music’s best kept secrets, Bob Carpenter. He may have only released one album, Silent Passage, but what an album it was.

Silent Passage was recently rereleased by No Quarter Records, on 19th August 2014. Belatedly, this lost classic Silent Passage, will be discovered by a new generation of music lovers. Hopefully each and every one of them will cherish Bob Carpenter’s one and only album, the flawless Silent Passage. 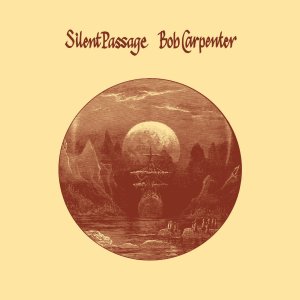