Although Don Ray played an important role in European disco music, working with Marc Cerrone and Alec Constandinos, Don only ever released one solo album, Garden of Love, released in 1978. Garden of Love was co-produced by Marc Cerrone, who released albums like Love In C Minor, Cerrone’s Paradise and Supernature. Don Ray had collaborated with Marc Cerrone on his 1976 debut  album Love In C Minor,1977s Cerrone’s Paradise, and would work with Marc again on Cerrone IV-The Golden Touch, released in 1978. However, even though Don Ray only released one solo album, Garden of Love, it’s an album that features some amazing music, from the disco classics of Got To Have Loving and Midnight Madness, to the jazz funk of Standing In the Rain. This made Garden of Love a Euro Disco classic, which was recently reissued as double vinyl album by Because Music. This is the only way to buy Garden of Love this year. Other inferior reissues won’t come close to the quality of Because Music’s reissue of Garden of Love, which will allow fans of Euro Disco music the opportunity to hear Don Ray’s only solo album again.

Since 1977, Don Ray had been a busy man, collaborating with Marc Cerrone and Alec Constandinos. Don had worked with Marc Cerrone on two albums, Cerrone’s Paradise and Cerrone IV-The Golden Touch. Now, however, was Don Ray’s time to step out of the shadow and record his debut solo album, Garden of Love. Little did Don know, but this would be his only solo album.

Joining Don Ray for the recording of what would become Garden of Love was Marc Cerrone, who cowrote the six tracks on the album with Lene Lovich and Don. Marc and Don co-produced Garden of Love, with Marc also playing synths and drums on the album. Other familiar faces were Madeline Bell and Sue Glover, who’d both sung backing vocals on Cerrone’s Paradise, which Don collaborated on. They were joined  by Kay Garner, who like Sue Glover, had contributed backing vocals on Cerrone IV-The Golden Touch. These female vocalists weren’t singing lead vocals, with male vocalists Lee Rich and Rob King chosen for the role. The reason for this was simple, Don wanted to distinguish his album from Cerrone’s. Lee Rich who sung most of the lead vocals, was known to Don, having previously sung on albums by the Kongas and Revalacion. Together with a small, tight band, Don recorded six tracks at London’s Trident Recording Studios, where Cerrone recorded his early albums. With Garden of Love completed during December 1977 and January 1978, the album was scheduled for release in August 1978.

Garden of Love was released in August 1978, where it would join Cerrone’s fourth album Cerrone IV-The Golden Touch. The album reached number 113 in the US Billboard 100, while reaching number four in the Disco Charts. Two singles were released from Garden of Love, with the disco classic Got To Have Loving the first single to be released. It reached number forty-four in the US Billboard 100, while the jazz funk single Standing In the Rain failed to chart. However, although both Garden of Love and the two singles weren’t a huge commercial success, Garden of Love is perceived as a classic album from the Euro Disco era, and I’ll now tell you just why that’s the case.

Opening Garden of Love is the classic disco track Got To Have Loving, which was the first single released from the album. The track gets underway with a combination of pounding drums, synths, keyboards and swirling strings, before blazing horns join the arrangement. Straight away, the track has a really catchy sound, which is added to when the trio of backing vocalists unite. Although there are similarities with Cerrone’s Paradise, which was released at the same time, especially the strings and drum sound. However, the use of male vocalists gives the track a quite different sound. The vocal is delivered with emotion and power, while the backing vocalists respond to his call. Meanwhile, synths, thunderous drums and braying horns all play their part in the dramatic arrangement. When the arrangement is pared down to just the drums, you can feel the drama and tension increase. Then when the arrangement rebuilds, it’s a myriad of drums, synths, keyboards and a loping, funky bass line. As the track heads a close, it somehow just keeps getting better. Backing vocalists, combine with Lee’s lead vocal as this brilliant track powers to its impressive and dramatic ending.

Body and Soul has a a quite different sound, opening with percussion and drums combining, before the track takes on a funky sound. The funkiest of bass lines, combines with synths, joining the drums and percussion. Unlike other tracks on the Garden of Love, this track doesn’t have a male lead vocal. Instead, it sees the joyous combination of Madeline Bell, Kay Garner and Sue Glover unite, while the deliver the lyrics almost like a chant. A flute soars above the busy arrangement, which now, combines elements of funk and even Afro-beat. However, good as the arrangement is, the highlight of the track is the joyful, united vocals of Madeline, Kay and Sue.

When Midnight Madness gets underway, the track combines elements of disco and funk. The song literally bursts into life, with the tempo the quickest on Garden of Love at 128 beats per minute. Not only that, but it’s the best track on the album. Here, Madeline, Kay and Sue’s backing vocalists accompany a powerful, sassy vocal from Lee Knight. Sung against an arrangement that’s a mass of cascading, swirling strings, a relentless drum beats, sweeping synths and blazing horns it’s an irresistible sounding, sizzling slice of the finest disco music. For nearly six minutes, the track is driven along by the pounding beat, while the trio of backing vocalists and Lee Knight deliver their best vocals on the album. This is one of these songs where everything is perfect about it, the arrangement, vocal and production from Don Ray and Marc Cerrone. It really is the highlight of Garden of Love.

How do you follow one great track? Quite simply with another. Standing In the Rain was the second single released from Garden of Love, and amazingly failed to chart. That seems remarkable given the quality of the song. With its driving drumbeats, punchy rasping horns, percussion and synths accompanying Lee’s vocal, the tempo is quick, the arrangement fuses elements of Euro disco, funk and electronic music. Again, Madeline, Kay and Sue contribute some scintillating backing vocals when the lead vocal drops out. For much of the arrangement, there’s no vocal, with synths and drums to the fore driving the track along, while horns and percussion augment Cerrone and Don’s production. What strikes me about the track is its timeless nature. Often albums from the late seventies that feature synths a lot, have aged badly. This isn’t the case here, with the track having a contemporary, almost timeless sound. Not only that, but it’s laden with energy and sounds fantastic.

The title track, Garden of Love sees the tempo drop to 107 beats per minute, which is the slowest track on the album. Again, percussion and crunchy drums open the track, before shimmering guitars enter, giving way to Lee’s raw vocal, full of chagrin. Madeline, Kay and Sue’s backing vocalists offer a contrast, their voices sweet and soulful, while there’s an edge to Lee’s voice. As his vocal drops out, the drums signal a change in tempo and sound. Guitars take the lead, giving the track a very different sound, almost laid back, mellow sound. Quickly, the guitars are replaced by percussion and synths, as the track takes on a different sound. However, this sound is just as compelling and captivating, on a track that although quite different from previous tracks, with its mellow and quite beautiful sound.

Closing Garden of Love is My Desire another track that bursts into life, mixing Latin, disco and jazz funk. Horns blaze as the track opens, joined by percussion, punchy drums and guitars, before a lilting, sad sounding vocal enters. The tempo increases as drums help drive the track along, reaching 128 beats per minute. Lush strings enter, just as percussion and punchy drums decide to drive the track along. When the backing vocalists enter, their voices are subtle, almost overpowered by the rest of the dynamic arrangement, which mixes elements disco and Latin music seamlessly. A combination of rasping horns and swirling string combine with drums and percussion as the song heads to its dramatic ending, after seven and a half magical minutes of the catchiest, finest disco music. It seems Don Ray decided to keep this gem of a track until last, and it’s a fitting way to end this visit to his Garden of Love.

It seems quite fitting that although Don Ray only released one solo album, Garden of Love, it was a classic disco album. On Garden of Love are two stunning slices of disco music Got To Have Loving and Midnight Madness, while Don demonstrates his musical versatility on Love is My Desire, a sizzling jazz funk track. Although there are some similarities with Marc Cerrrone’s Cerrone’s Paradise, Don’s use of male vocalists helps distinguish the two albums’ sound. Like Cerrone’s Paradise, Don Ray’s Garden of Love is a classic Euro Disco album, that demonstrates that American producers didn’t have the monopoly on producing quality disco music. 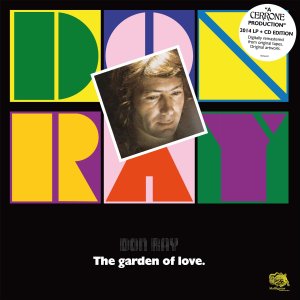