The story began in 1966, when bassist Ashley Hutchings met guitarist Simon Nichols were both members of the Ethnic Shuffle Orchestra. The band rehearsed above Simon Nichols’ father’s medical practice, in a house called Fairport, in Fortis, Muswell Hill. This house would lend its name to a future musical institution a year later.

The newly formed Fairport Convention played their first concert at St Michael’s Church Hall, Golder’s Green, North London. That night, a member of the audience Martin Lambie convinced the rest of Fairport Convention that he could play better than their drummer Shaun Frater. This would be the first of many changes in lineup over the next forty-eight years.

Things have never gone smoothly for Fairport Convention. There’s been numerous changes in lineup, fallouts and even the occasional musical sabbatical. Despite this, Fairport Convention have still managed to release twenty-five studio albums between their eponymous debut album in June 1968, and their twenty-fifth album, Myths and Heroes, which was released on Matty Grooves Records.

This included bassist Matt Pegg, who played on four tracks. However, most of the guest artists were brought in to play on just one track, The Gallivant. The string section included violinists Joe Broughton, Paloma Trigas and Aria Trigas. They were joined by a horn section that featured trumpeter Rob Spalton, tenor saxophonist Emma Jones and alto saxophonists Jake Thornton and Benjamin Hill. These guest artists all played their part in Myths and Heroes, which was released in two stages.

Myths and Heroes opens with the title-track, Myths and Heroes. Straight away, Fairport Convention’s rhythm section, guitars and violins drive the arrangement along. Chris Leslie delivers a questioning, probing vocal. His lyrics draw inspiration from the Romulus and Remus, the main characters in Rome’s foundation myth. As Chris paints pictures with his lyrics, violins urgently sweep and swirl. Meanwhile, the rhythm section, guitars and mandolin match the urgency of the violins. It’s Fairport Convention doing what they do best, playing their award winning brand of folk rock.

Clear Water was penned by Ralph McTell, who in the sleeve-notes writes of his admiration and respect for Fairport Convention. His lyrics are delivered by Simon Nichol, against a much more traditional arrangement. Everything from an acoustic guitar, violins, percussion, drums and ukelele combine with harmonies. Simon’s  vocal is full of hope as sings: “I want clear water from here to the horizon.” This is a metaphor for the journey that’s life. He’s a realist though. He knows it won’t always be plain sailing. Despite this, Simon is forever an optimist, with hope filling his voice during this quite beautiful song.

The traditional folk sound continues on The Fylde Mountain Time/Roger Bucknall’s Polka. Fairport Convention deploy a myriad of traditional instruments. At the heart of the song is multi-instrumentalist Dave Pegg. If he can strum or pluck it, he’s guaranteed to get a tune out of it. Bazoukis add to the Greek influence and sound on Roger Bucknall’s Polka which is truly joyous and uplifting.

From the opening bars,  it’s obvious that Theodore’s Song is more than a little special. The song tells the story of Theodore, a travelling watch and clock repairer and musician, who travelled across Oxfordshire in the first half of the 20th Century. He had been hurt, and hurt badly. Chris Leslie takes charge of the vocal and tell his story. His worldweary vocal brings the lyrics to life. Meanwhile, drummer Gerry Conway marks time. An acoustic guitar, ukelele and tenor guitar combine, as Chris tells the story of how Theordore was jilted at the altar, and how he never was the same after that. Together, Fairport Convention play their part in a song that manages to be heartbreaking, emotive and also, beautiful.

Violins urgently play, drums pound and Fairport Convention’s rhythm section kick loose on Love at First Sight. Bursts of search guitars are added, as Fairport Convention get into their stride. They’ve been transformed into a hard rocking folk rock band. Chris Leslie tells the story of the lengths a woman goes to join become a Morris dancer. Having done so, she finds love. This hook laden, irresistible rocky track tells her story as only Fairport Convention can do.

John Condon marks a return to a more traditional folk sound. Wistful violins play and a guitar is strummed, before Simon Nichol delivers melancholy vocal. He tells the story of those who fell on the Belgian battlefields during World War 1. In John Condon’s case, he was a “wee lad who’ll not grow old, heroes who won’t come home, here they lie in Belgian fields and Picardy.” It’s a heartbreaking song, that brings home the folly of war, and reminds the listener of all the lives that were lost, including many like John Condon, who were just boys.

For recording of The Gallivant, Fairport Convention brought onboard the Broughton’s Conservatoire Folk Ensemble. They supply the string and horn section. Meanwhile, Fairport Convention drive the arrangement. Again, they deploy an eclectic selection of instruments. Drums and keyboards are joined by an Ibanez bass, a mandolin, and electric violins. They play their part in a stirring, scorching slice of folk that’s guaranteed to get any party started.

Rob Beattie wrote the wistful sounding The Man in the Water. From the opening lines: “there’s a man in the river, policemen standing in a circle, round the man, man in the water, who sees nothing but circles,” you’re captivated. The track has a cinematic sound. Especially with the understated arrangement, and Chris’ wistful, questioning vocal. He’s searching for answers. Who was he, what did he do? Meanwhile, swathes of melancholy strings, a Celtic Harp, drums and a bouzouki  join the fretless bass. Fairport Convention play thoughtfully and with subtlety, framing Chris’ vocal, on what’s one of Myths and Heroes’ highlights.

Anna Ryder wrote Bring Me Back My Feathers on what was originally a five-string banjo. However, when she bought it in a charity shop in 1987, it had lost a string. She’s never rectified this, and still managed to write this song. Chris Leslie sings the lead vocal and plays a banjo. Gerry Conway’s drums provide the heartbeat. Soon, the arrangement unfolds. An electric violin, Ibanez bass, percussion and electric guitar enter, and drive the arrangement along. It has a much more traditional folk sound. So has Chris’ vocal. It’s needy and hopeful as he sings: “bring me back me sweetheart, else I cannot live, bring me back me sweetheart, anything I give.” Chris’ vocal plays an important part in the sound and success of Bring Me Back My Feathers.

Grace and Favour was written by Chris Leslie after visiting the Grace Darling Museum in Bamburgh. That’s where he saw the gold medal awarded to Grace Darling from the Humane Society. She rescued nine people from a raging storm. Here, Fairport Convention tell her story, and pay tribute to a incredibly brave woman. From the opening bars, Chris’ lyrics are cinematic. So much so, that if you close your eyes, the scenes unfold before your eyes. Meanwhile, a violin, electric guitar, bouzouki and the rhythm section provide the backdrop, as this breathtaking story of courage and selflessness unfolds.

As Weightless/The Gravity Reel unfolds, Chris delivers a despairing vocal. He brings to life Weightless’ lyrics, which deal with loss. The arrangement floats along slowly. Drums mark time, violins add a melancholy sound and Chris’ vocal is full of despair. Then as a crystalline guitar weaves its way across the arrangement and Celtic violins sweep and swirl, The Gravity Reel begins. It was inspired by the film Gravity, which tells the story of a woman rebuilding her life after losing a child. The deliver of the lyrics: “I am striving,  am striving to rebuild,” is heartfelt and full of hope, hope for the future. Just like Weightless, The Gravity Reel is a truly poignant and moving song.

Home was written by P.J. Wright. An acoustic guitar is strummed before Chris vocal enters. He’s in a reflective mood, realising that the years are passing by. That’s why he sings: “this is home and where I’ll stay.” He wants to be with his family and friends. Later, there’s a sense of realisation: “were any of us ever aware, we’re living on borrowed time?” By the, a guitar and violin combine with the rhythm section and percussion play. They provide a backdrop to Chris’ sudden realisation of how “we’re living on borrowed time.” It’s a wakeup call, and makes him realise how precious life is.

Jonah’s Oak closes Myths and Heroes. A melancholy violin plays, a guitar is strummed and they rhythm section play slowly, thoughtfully and with a subtlety. Together, they provide a beautiful, wistful track that’s the perfect way to close Myths and Heroes. 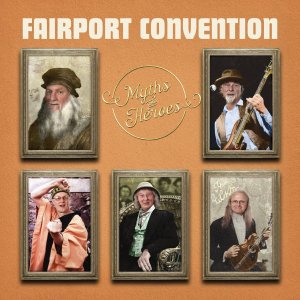