Since the dawn of the internet age, the way music has been made, released and consumed has been totally transformed. For unsigned bands this has been a game-changer. Yuri Gagarin are proof of this.

No longer did recording a few songs necessitate booking a rerecording studio, which charged by the hour. Instead, Yuri Gagarin could record some songs in their own practice room using affordable equipment. It was changed days.

As computers become more affordable, so did digital audio workstations. Programs like Pro Tools, Cubase and later Ableton Live were within the budget of an unsigned band wanting to record either demos or even, an album.

All an unsigned band needed, was a computer running a DAW, an audio interface and some microphones. Then they had their own home studio. Initially, this would allow a band to record demos, which they could shop to record labels. Other bands recorded an album using their own label, and released it on their own label. This would soon become more commonplace.

Over the next few years, there was a revolution within the music. A catalyst for change was the internet. It had transformed how people made, released and consumed by mid-2012. Now it was possible for a band record a song in the morning; upload it onto the internet in the afternoon; and by the evening, people around the world could be listening to this. That’s what Yuri Gagarin did.

Having loaded their newly recorded songs onto Soundcloud, Yuri Gagarin couldn’t believe what happened next. Within a few weeks, Yuri Gagarin were named Soundcloud’s band of the week. That was quite an achievement, considering bands worldwide were submitting music. So it was no surprise that a couple of months later, Yuri Gagarin got the chance to record and release a new album.

The offer came from a new label based in Gothenburg. Yuri Gagarin jumped at opportunity, and soon, found themselves in the studio. They recorded four tracks which became their eponymous debut album. Yuri Gagarin was then released in October 2013 on Levande Begravd Records.

When Yuri Gagarin was released, the album was well received by critics and sold well. Despite this, Yuri Gagarin weren’t happy with the sound quality. So in 2014 a decision was made to remix the album.

Linus Andersson the head sound engineer at Liseberg, was drafted in to do the remix. He improved the sound of Yuri Gagarin, which was released as on vinyl by Sulatron-Records. Quickly, the album sold out, and since then, Yuri Gagarin’s star has been in ascendancy.

Word was spreading about Swedish space rockers Yuri Gagarin. Their unique brand of heavy, instrumental space rock was compared to Hawkwind. This was a huge complement for the Gothenburg based band who began recording their sophomore album during 2015.

So the five members of Yuri Gagarin headed to Elementstudio, in Gothenburg. That’s where Yuri Gagarin prepared to record the six new tracks they had written. They would be recorded by Linus Andersson who would guide the band through the recording of their debut album.

With Linus Andersson take charge of the recording sessions, the members of Yuri Gagarin got to work. Yuri Gagarin’s all important rhythm section were key to the band’s sound. Drummer Steffo, bassist Leif and rhythm guitarist Jon formed a formidable partnership. They were joined by lead guitarist Crille and Robin on synths and FX. Other instruments were brought into the studio, including a bouzouki, grand piano, monotron and percussion. These instruments were played by members of Yuri Gagarin and recordist Linus Andersson. He also mixed and mastered what Yuri Gagarin’s sophomore album. It became At The Center Of All Infinity.

The New Order opens At The Center Of All Infinity. From the get-go, Yuri Gagarin kick loose. Machine gun guitars drive the arrangement along, while brief bursts of futuristic sounds can be heard in the distance. Soon, the rhythm section lock into a tight groove, and  become one. Meanwhile the lead guitar that’s panned hard left plays a starring role. It unleashes a blistering solo. Fingers fly up and down the fretboard, while a relentless and impressive wall of sound assails the listener. Later, filters are deployed, taking the edge off the arrangement and adding the space rock sound. However, there’s more to Yuri Gagarin than space rock.

Apart from space rock, Yuri Gagarin combine elements of classic rock, heavy metal and psychedelia, before it’s all change at 5.48. The arrangement almost grinds to a halt, as feedback threatens to drench the arrangement. Somehow, the tiger is tamed, as the guitar continues to play, as Eastern influence and drones flit in and out during this epic opening track. It’s the perfect showcase for Yuri Gagarin’s considerable skills and versatility.

Cluster Of Minds features Yuri Gagarin at their heaviest. Straight away, the band play as one and a wall of sound assaults the listener’s senses. Anchoring the arrangement, are the rhythm section, as the twin guitars play starring roles. Again, Crille’s lead guitar is panned left, while the rhythm guitar is panned right. This has the effect of balancing the arrangement. Both guitarists unleash blistering, searing solo and rocky riffs. It’s as of they’re feeding off each other Meanwhile, washes of synths and effects add an dramatic “breathing” sound as space rock and heavy metal unite head on. However, it’s Crille’s lead guitar that steals the show as the track reaches a crescendo.

In The Abyss sees Yuri Gagarin pickup where they left off on Cluster Of Minds. Guitars ring out, before washes of synths and the ominous bass combine. Then the rhythm section cut loose. Drums aren’t so much played as pounded. Still the bass matches the drums every step of the way. It’s the guitars that take centre-stage. Crille’s guitar is panned left, and sometimes filters are used to transform the sound. That’s the case when Jon’s guitar is panned right. It’s almost hidden below the filters. As a result it plays a supporting role to Crille’s lead guitar, as he delivers what can only be described by a guitar masterclass. His playing seems to life the rest of the band, and they unleash a barnstorming performance.

I See No God Up Here is more like a soundscape, than a traditional song. It’s been sculpted over three minutes by Yuri Gagarin. Washes of synths play an important role, while a buzzing bass and feedback create a moody, dramatic and latterly, ethereal soundscape.

Normal service is resumed on At The Center Of All Infinity. Yuri Gagarin return to their space rock sound with what can only be described as impressive, but controlled explosion of sound. The rhythm section combine with relentless, driving guitars and washes of synths. They soar above the arrangement, before Crille steps up and unleashes another blistering, searing solo. Filters are then added, as Jon’s rhythm guitar takes centre-stage. The as washes of synths encircle the arrangement, one becomes two, and Yuri Gagarin duel guitars drive the arrangement along. Later, bursts of bubbling, futuristic sci-fi synths encircle enter, as the rest of the arrangement  dissipates. All that’s left are sci-fi sounds and of course, the memories of Yuri Gagarin in full flow.

All too soon, Yuri Gagarin’s sophomore album At The Center Of All Infinity is almost over. Only Oblivion remains. It’s a nine minute epic, that’s driven along by searing guitars and the thunderous rhythm section. Trails of synths soar above the arrangement, as again, the guitars are key to the song’s success. Crille and Jon unleash machines gun guitars, and blistering solos. They’re fast, furious, flawless and melodic. Yuri Gagarin seem to have kept the best until last. Then at 8.20, the volume decreases and Yuri Gagarin disappear leaving just a trail of sci-fi sounds. The space rockers it seems, have left the building..,until the next time.

Hopefully, it won’t be another three years before Yuri Gagarin return with the followup to At The Center Of All Infinity. It was recently released on coloured vinyl Sulatron-Records. Not only does the album look great, but sounds great. It’s beautifully mastered, and isn’t over loud. Care and attention has been taken to the mastering of At The Center Of All Infinity. It features the coming of age Yuri Gagarin. The Gothenburg based band have matured into one of the finest exponents of instrumental space rock.

From the opening bars of The New Order, to the closing notes of Oblivion, it’s an almost flawless performance from Yuri Gagarin. They combine elements of classic rock, heavy metal and psychedelia with Yuri Gagarin’s unique brand of space rock. It’s fast, frenetic and melodic, as five hugely talented musicians showcase their considerable skills and versatility. Stealing the show are Yuri Gagarin’s guitarists, Crille and Jon. They both play starring roles. However, it’s lead guitarist Crille who gets more opportunities to shine. When he does, he grabs them with both hands, and unleashes a series of blistering, scorching, searing solos. They play an important part in the sound and success of Yuri Gagarin’s career defining album, At The Center Of All Infinity. 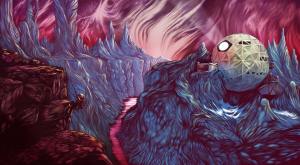 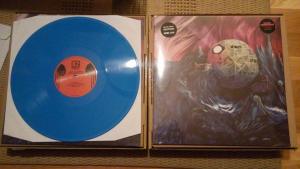