In his spare time, Charles Jackson wrote songs. This wasn’t new. Charles had been writing songs for years. He had always been regarded as an artistic child, as he grew up in Greenville, Carolina. However, by 1971 Charles was beginning to realise he had so much he wanted to say via his music. It was his true passion. So Charles went in search of likeminded people.

That was how Charles Jackson found himself at Chicago’s Black Writer’s Workshop, and met with Jerry Butler. He was in the process of choosing songs for his new album, and had decided to record an album of songs penned by members of Chicago’s Black Writer’s Workshop. When Jerry Butler came to choose the songs for his album Jerry Butler Sings Assorted Sounds With The Aid Of Assorted Friends And Relatives, three of Charles Jackson’s songs were chosen. This included It’s Real What I Feel, a duet with Brenda Lee Eager. It reached number sixty-nine in the US Billboard 100 and eight in the US R&B charts. So pleased was Jerry Butler with Charles’ songs, that Walk Easy Me Son was chosen for The Sagittarius Movement. Already, it looked as if Charles was about to embark upon a successful songwriting career. However, what about if he became part of a songwriting team?

Around this time, a twenty-one year old Marvin Yancy attended the Chicago’s Black Writer’s Workshop. He had played the organ in a local church, but was an aspiring songwriter. Marvin Yancy had written songs under the alias of Maurice Barge, and would soon meet his future songwriting partner.

When Charles Jackson and Marvin Yancy began talking, and realised they had much in common. It was only a matter of time before Charles Jackson and Marvin Yancy began to write songs together. When they began to write together, they proved a potent partnership, encouraging each other to even greater heights. Two heads were definitely better than one. Little did Charles and Marvin know that some of these songs would hit potential.

Having penned some songs, Charles hit on the idea of forming a group. Secretly, he had dreamed of becoming a singer. So Charles approached Marvin about forming a group. Marvin Yancy agreed, and the pair began the search for the rest of the nascent group.

It didn’t take long, before the search was over. Benjamin and Company, had been stalwarts of Chicago’s soul scene. However, the band that Ben Hernandez had founded had split-up. Two former members of Benjamin and Company, Helen Curry and Maurice Jackson were singing together in a local club when Charles Jackson saw them. Straight away, he realised that here were the missing pieces in his musical jigsaw.

Charles Jackson approached and asked Helen Curry and Maurice Jackson about joining his nascent band. They were interested, and agreed to join Charles and Marvin’s new band, which they called The Independents. Their music is documented on Just As Long-The Complete Wand Recordings 1972-74. It was recently released by Kent Soul, an imprint of Ace Records.

When Maurice Jackson joined The Independents in 1972, he was already twenty-eight. He was born in Chicago in 1944, and embarked upon a musical career in the early sixties. In 1963, Maurice made his recording debut. Since then, he had moved between labels but never enjoyed any major success. So Maurice decided to put his solo career on hold, and joined The Independents with Helen Curry.

Just like Maurice, commercial success eluded Helen Curry. She had released a quartet of singles between 1968 and 1969, but they all failed commercially. So when she joined Benjamin and Company it was a new start. Sadly, the band split-up, and Helen and Maurice found themselves treading water. That was until they met Charles and Marvin, and joined their new group, The Independents.

Soon, the newly formed Independents were soon signed to Wand Records, which would be home to them for the next two years. The record contract came about through a contact at the Chicago’s Black Writer’s Workshop. However, before long, The Independents were replaying Wand’s faith in them.

Seven months after the release of Just As Long As You Need Me, The Independents released I Just Want to Be There as a single. It was a heart wrenching ballad, with a lush arrangement that featured strings, horns and harmonies. There was almost a Philly Soul sound to I Just Want to Be There. On the flip-side was Can’t Understand It. Both songs were penned by Charles Jackson and Marvin Yancy. When I Just Want to Be There was released in November 1972, the single reached just thirty-eight in the US R&B charts. This was slightly disappointing. However, it was just a blip.

When Leaving Me was released in 1973, it reached twenty-one in the  US Billboard 100 and one in the US R&B charts. Leaving Me which was penned and produced by Charles Jackson and Marvin Yancy sold over 500,000 copies and was certified gold. With Leaving Me having crossed over, it should’ve been skies the limits for The Independents.

For their fourth single from the album from The First Time We Met, the ballad Baby I’ve Been Missing You was released as a single later in 1973. It was penned by Charles Jackson and Marvin Yancy. The B-Side Couldn’t Hear Nobody Say (I Love You Like I Do) was a Maurice Barge and Jimmie Jilies song. When Baby I’ve Been Missing You was released, it reached forty-one on the US Billboard 100 and four in the US R&B charts. The Independents had found a winning formula and were sticking to it.

Later in 1973, The Independents had finished their sophomore album Chuck, Helen, Eric, Maurice. It featured songs like The Same Old Way, the wistful ballad In The Valley Of My World, One Woman Do Right Man and Lucky Fellow. They showcased a truly talented band who looked like they had the world at their feet. There was a problem though.

Maurice Yancy didn’t want to tour the album. There was only one option, bring onboard a singer to replicate Maurice. The man who was given the job, was another Chicago born singer Eric Thomas. Having learnt The Independents’ songs, he headed out on tour. Then when he returned home, The Independents became a five piece.

By then, the soul-baring ballad It’s All Over had been released as a single. Just like the B-Side Sara Lee, it was penned by Charles Jackson and Maurice Yancy. When It’s All Over was released, it reached number sixty-five in the US Billboard 100 and twelve in the US R&B charts. 1973 had been another successful year for The Independents.

Later in 1974, The Independents toured Europe, but only played US military bases. This was disappointed their fans. However, The Independents were keen to begin work on their third album, which would see them jump onboard the disco bandwagon.

When The Independents released Let This Be A Lesson To You later in 1974, this impassioned ballad proved to be their swan-song. Just like the flip-side No Wind, No Rain, Let This Be A Lesson To You was penned by Charles Jackson and Maurice Yancy. When the single was released it reached eighty-eight in the US Billboard 100 and seven on the US R&B charts. At least The Independents bowed out with a top ten single.

The Independents enjoyed eight hit singles in the US R&B charts, and five in the US R&B charts. This included four top ten singles, including the number one single Leaving Me. It was one of The Independents’ trademark ballads, which was certified gold after selling over 500,000 copies. However, Leaving Me is just one of twenty-two tracks that feature on Just As Long-The Complete Wand Recordings 1972-74. It was recently released by Kent Soul, an imprint of Ace Records and includes singles, B-Sides, album tracks and a remix. The twenty-two tracks on Just As Long-The Complete Wand Recordings 1972-74 include the best and most beautiful music in the three year career of Chicago’s very own The Independents. 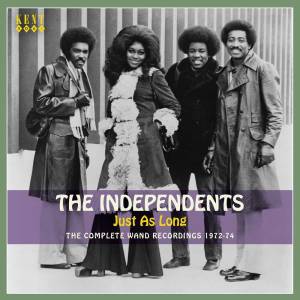 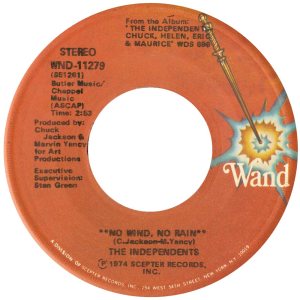 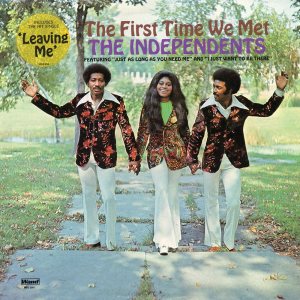 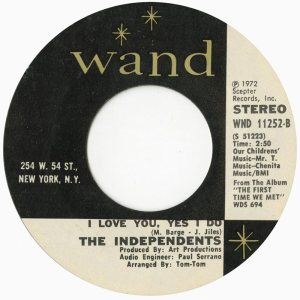 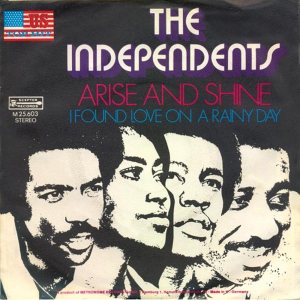 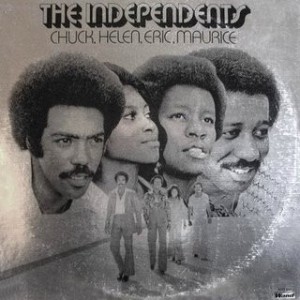 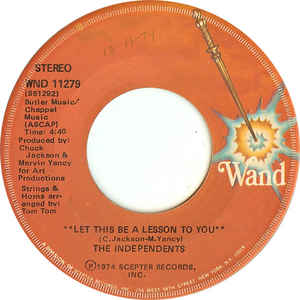 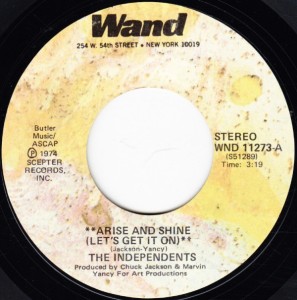 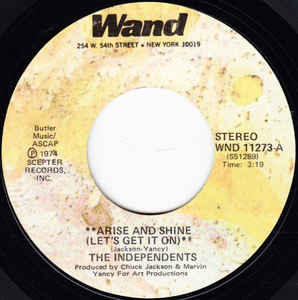 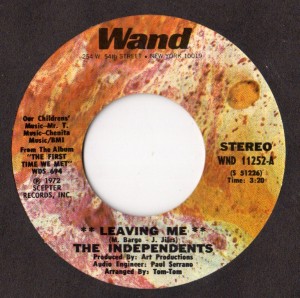 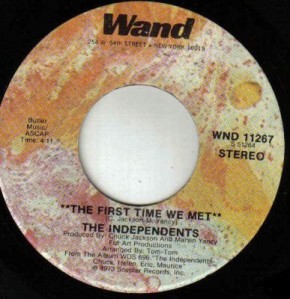 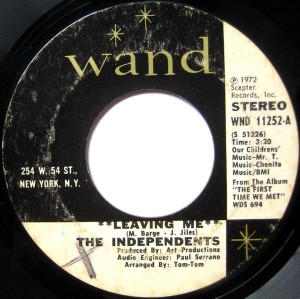 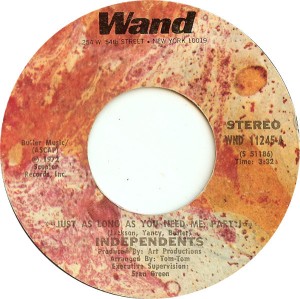 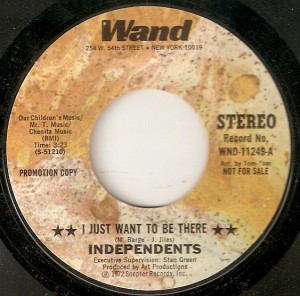