Everyone who founds a record company, has their own reason for doing so. Often, they own a recording studio or manage artists and bands. Founding their own record label is a natural progression for them. That was also the case with three giants of music.

The story began in the early seventies, when Michael Thevis was looking for a legitimate way to get his substantial fortune into the financial system. By then, Michael Thevis was  heavily involved in pornography. So much so, that he would later admit to a Louisville jury that he was: “the General Motors of pornography.” That was still to come.

In the  early seventies, Michael Thevis had a problem. He discovered that he was under investigation from the FBI. Not wanting to follow in the footsteps of Al Capone and Dutch Schultz, who were brought down by federal investigations, Michael Thevis began looking for legitimate enterprises.

Casting around looking for a legitimate business, Michael Thevis hit upon the idea of forming not one, but three record labels. This included GRC (General Recording Corporation), Aware and Hot Atlanta. These labels were part of Michael Thevis’ nascent musical empire. The three labels recorded some of the music on Come Back Strong-Hot Atlanta Soul 4, which will be released on Kent Soul, an imprint of Ace Records on 26th August 2016. Many of these songs were recorded at another part of Michael Thevis’ nascent musical empire.

Soon, there was a new addition to Michael Thevis’ musical empire, the Sound Pit Studio in Atlanta. It boasted some of the best equipment money could buy. Building the studio made financial sense. It saved hiring other studios, and meant artists signed to GRC, Aware and Hot Atlanta could record at the impressive Sound Pit Studio. When the studio wasn’t in use by Michael Thevis’ artists, it could be hired out, and bring in much needed income. However, as all this empire building continued, tongues began wagging, including Michael Thevis.

Veterans of the Atlanta music scene watched, as the state-of-the-art studio took shape. This was the most advanced studio in Atlanta. It was a similar case with the rest of Michael Thevis’ musical empire.

No expense was spared as Michael Thevis expanded his musical emprire. He added to his record labels and Act One publishing company, the Jason Management booking agency and a film company. They became part of Michael Thevis’ musical empire. He was proud of his empire, and wasn’t shy about telling people about it.

Rather than keep a low profile, Michael Thevis ran his musical empire from a lavish suite of offices in Atlanta. They were featured in Billboard in May 1974, when the magazine ran a feature on the Atlanta music industry. A bullish Michael Thevis told Billboard of his latest takeover, and his expansion plans.

Michael Thevis told Billboard of his plans to build a brand new twenty-eight story skyscraper in Atlanta. This would be where he ran his musical empire. It would have outposts in Nashville, Houston, Los Angles, New York and London. What made Michael Thevis’ seem all the more convincing, was when he booked eight pages of advertising in Billboard’s Atlanta special.

To most people, Michael Thevis came across as a legitimate businessman, who had big plans for the future, and for Atlanta. By then, everyone seemed to buy into Michael Thevis’ grand plan. He was the local boy who had made good. It was a case of hail the conquering hero.

Incredibly, though, nobody seemed to be paying close attention to the numbers. None of Michael Thevis’ record companies were particularly successful. They were nether consistently releasing hit singles, nor successful albums. So where was all the income coming from? Was it the publishing company, recording studio, booking company or film company? Nobody it seemed, was in a hurry to find out. Given Michael Thevis past and his reputation for violence, maybe that wasn’t surprising?

Originally, Michael Thevis’ film company financed legitimate films. This included the Zhui Ming Qiang in 1973, and  Seizure,  one of Oliver Stone’s earliest films. It was released in 1974. A year later, Michael Thevis had gone up in the world, and released Poor Pretty Eddy 1975. Every film was bringing greater riches Michael Thevis’ way. However, although Michael Thevis was trying to build a legitimate business empire, he had reverted to type.

The film company he had acquired began producing pornographic films. If any journalist had even looked into activities of Michael Thevis’ empire, it could’ve come tumbling down. This looked unlikely in early 1975.

Country singer Sammy Johns had been signed to GRC for a couple of year. In  early 1973, Sammy Johns released Chevvy Van as a single. It was reported to have sold over three million copies. Given that a GRC artist had just enjoyed such a successful single, surely the label’s finances would be on a sound footing as 1975 progressed?

Running a regional record companies offered Michael Thevis an opportunity and facility to launder dirty money. He could’ve used dirty money to buy his own companies’ releases. These phantom record sales would only exist on paper, and would have the effect of laundering the dirty money through the company’s accounts. Once the money was in the record company’s accounts, tax could be paid on the profit that had been made. This would further legitimise any dirty money the company was making. Especially, as the FBI were still watching Michael Thevis.

He was convicted of conspiracy to commit arson, and distribution of obscene materials. The man who sparked the three year investigation into Michael Thevis, even testified in court. Roger Dean Underhill  took to the stand, and the FBI’s informant testified against his former business partner. He thought this was the right thing to do.

GRC, Aware and Hot Atlanta were home to some of the most talented artists in the southern states of America. This included  Sam Dees, John Edwards, Dee Irwin, Joe Hinton, Loleatta Holloway, Danny Johnson, Jimmy Lewis and Dorothy Norwood. They all feature on Come Back Strong-Hot Atlanta Soul 4, which I’ll pick the highlights of.

She released four singles for GRC between 1973 and 1975. However, Big Boat Ride, which was penned and produced by Deke Richards, and was the one that got away. Dorothy Norwood sings call and response with her backing vocalists, and seamlessly combines gospel and soul on this long lost hidden gem. It’s a welcome discovery, and reminder of what Dorothy Norwood is capable of.

Another song that was recorded for GMC, but never released, was John Edwards’ cover of Sam Dees’ Come Back Strong. Things might have been very different, had the Aware label which John Edwards was signed to, had not closed its doors in such a hurry. Maybe Come Back Strong would’ve given the future member of The Detroit Spinners that elusive hit single, as he brings new meaning to this Sam Dees’ classic?

When Judy Green released Face To Face as a single on the Aware label. Tucked away on the B-Side was I Still Love You So. Both songs were written and produced by Atlanta born Thomas “Tee” Fletcher. When Face To Face was released, it was only the second single that Aware had released. It was the perfect showcase for Judy Green.

She was a talented and versatile singer, who was born and brought up in Rockmart, Georgia. Judy Green delivers a vocal powerhouse on the hook-laden Face To Face. It epitomises everything that’s good about Southern Soul. The flip side I Still Love You So is a beautiful ballad, which shows another side to Judy Green. She seems to live the lyrics, as she delivers a needy, hopeful vocal.

By 1973, Joe Hinton’s recording career was a decade old, when he signed to GRC’s imprint Hot Atlanta. Already, the singer-songwriter had already passed through various labels, and was hoping that Hot Atlanta was the start of something new. It was. He wrote two songs for the 1974 movie Black Scarlet with Dee Irwin. These two songs feature on the Black Starlet promo EP.

This included the beautiful, piano lead soulful ballad Up Is Down. Then on Hollywood Faces Joe Hinton is joined by Dee Irwin. They duet on what is a funky, soulful and cinematic ballad. Joe Hinton’s last contribution, is a cover of Jimmy Lewis’ A Hundred Years From Now. It’s a lovely, understated and enchanting ballad that meanders along, and in the process, showcases the vocal prowess of Joe Hinton.

Prolific. That is probably the best word to describe singer-songwriter Jimmy Lewis. He wrote many songs, which were covered by a variety of artists. Jimmy Lewis also recorded many of the songs he wrote. This includes I Can’t Leave You Alone, a Southern Soul ballad, where Jimmy Lewis delivers a needy vocal. Sadly, this song lay in GRC’s vaults until 2002, when it was released on a compilation Kent Soul compilation. It makes a welcome reappearance on Come Back Strong-Hot Atlanta Soul 4.

Another prolific songwriter was Sam Dees. He penned both sides  Jean Battle’s sophomore single. It was released on Red Lite in 1972 as a double-A side. Both sides ooze quality, but When A Woman Loves A Man is the stronger of the two. It features a soul-baring vocal, on another Southern Soul hidden gem.

Lorraine Johnson was born in Alabama in 1949, and like many future soul singers, grew up singing gospel. By the late sixties, Lorraine Johnson had crossed over and was singing in clubs. It was around this time, that Lorraine Johnson met Bill Brandon, who would introduce later, her to Clinton Moon and Jesse Lewis, who owned Moonsong Records.

In 1973, Bill Brandon and Lorraine Johnson released Let’s Make Our New Love Something Special as a single. Both sides were penned by Sam Dees, who became Lorraine Johnson’s vocal coach. Sadly, that was Lorraine Johnson’s only release on Moonsong Records. She did record a number other songs, which have lain unreleased. This includes A Love Like Yours and the Sam Dees and Fredrick Knight composition The Best Of My Years. It features a heartfelt and soulful vocal from Lorraine Johnson, who with Sam Dees’ help and guidance, was blossoming into a talented and versatile singer.

During the seventies, Sam Dees recorded many demos, including What Good Is Love. It was never released until 2015, when it found its way onto Kent Soul’s compilation It’s Over. What Good Is Love is a tantalising taste of what Sam Dees is capable of, and a reminder of the It’s Over compilation.

GRC and the rest of Michael Thevis’ musical empire all came crashing down in late 1975. Michael Thevis’ attempt to build a legitimate business empire was doomed to failure. It had been for three years, ever since the FBI starting investigating his business activities.

It was a disaster for all the artists affected by the collapse. They were left without a label. Some of the artists were also owed royalties, which in some cases, was a significant sum of money. For the artists signed to GRC, Aware and Hot Atalanta, they had no idea what the future held for them.

They certainly could never have envisaged that forty-one years later, some of their music would be among the twenty-three tracks on Come Back Strong-Hot Atlanta 4. It will be released by Kent Soul, an imprint of Ace Records on 26th August 2016.

Nearly three years after Michael Thevis’ attempt to buy respectability began, it was foiled by the FBI. This was the end of what was a remarkable escape in Atlanta’s musical history. Part of the story is documented on Come Back Strong-Hot Atlanta 4, which is a tantalising reminder of Atlanta’s rich and vibrant musical scnee during the early seventies. 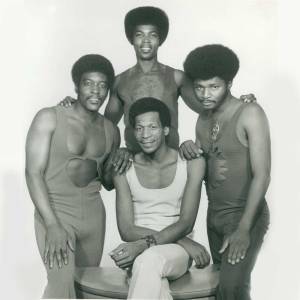