Recording and producing Addictive TV’s debut album Orchestra Of Samples has been a labour of love for production duo Graham Daniels and Mark Vidler. They spent five years travelling far and wide, visiting over twenty-five  countries to record with hundreds of local musicians to create the source material for Orchestra Of Samples. These recordings were then sampled  by Addictive TV, and eventually, became part of Orchestra Of Samples which was released on the K7! label on the ‘2nd’ of June 2017. This brings to fruition a project that began seven years ago.

Back in 2010, Addictive TV set out on what was a mammoth musical journey. Even they weren’t aware of the amount of travelling it would take to gather the source material for the Orchestra Of Samples project. However, Graham Daniels and Mark Vidler were by then, used to travelling.

They had already travelled the world with Addictive TV’s live audio-visual show. It had won praise and plaudits from critics and music fans over the years. However, during a period of reflection, Graham Daniels and Mark Vidler decided to take their career in a different direction. They decided to record their debut album. It’s an album with a difference though.

Orchestra Of Samples is essentially a musical collage, which is made up of samples of music that Addictive TV recorded on their five-year journey. During that epic journey, Addictive TV formed friendships and met musicians in far-flung corners of the globe. It was a life changing experience for Graham Daniels and Mark Vidler.

The journey began in 2010, and found Addictive TV crisscrossing the globe in their search for music for their debut album. Their travels took Addictive TV to five continents, where they visited over twenty-five countries. This included Bhutan, Brazil, Britain, China, France, Israel, Mexico, Senegal, Spain and Turkey where they worked with musicians whose music features on Orchestra Of Samples.

When they arrived in each country, Addictive TV were determined to forge long-lasting friendships and working relationships with the people and musicians they met. The only way to do this, was spent some time in each country and experience the local culture. This was very different from many DJs and bands, who make flying visits to a country, and never experience the local culture beyond their hotel room.

In each country, Addictive TV made a point of getting out and meeting local people during what was the modern equivalent of a grand tour. When they arrived in Tunisia, they spent time with locals in Tunisia at the beginning of the beginning of the Arab Spring. Addictive TV heard firsthand of the Tunisian people’s concerns as the country underwent a revolution. This sparked anger and frustration as the Tunisian people feared for democracy and human rights. Then when Addictive TV arrived in Senegal to record rapper Matador, they saw the outreach and education program he was providing for local young people. All these experiences opened Addictive TV’s eyes to what was happening in each country beyond the local music scene. It was an enlightening experience.

So was working with the hundreds of musicians Addictive TV met during their five-year journey. This was an opportunity to discover common ground between musicians in different countries. Graham Daniels remembers; “we began this project with no preconceptions, just a curiosity to explore musical possibilities. It’s made me see that all music clearly has the same basic roots and building blocks from which to create.” These “building blocks” were recorded in over twenty-five countries.

Addictive TV made several hundred recordings, which featured musicians jamming and improvising. Many times, just one artist was recorded. Sometimes, though, the recordings featured a number of musicians. In Bhutan, Addictive TV recorded the Bhutanese Himalayan village choir for the title-track Orchestra Of Samples. Other artists that were recorded and feature on the album included sitar player Baluji Shrivastav, Stereolab’s Laetitia Sadier and Senegalese rap-star Matador. However, regardless of who or how many people Addictive TV were recording and filming, they had the freedom to record what they wanted and how they wanted.

Each artist played a variety instruments, that ranged from what would be regarded as traditional, too much more avant-garde instruments. Each artist was encouraged to improvise,and record in different keys, time signatures and styles. These recording would eventually result in the threads that would become the musical tapestry that eventually, became Orchestra Of Samples.

Having spent five years recording the music that would be sampled for Orchestra Of Samples, now Addictive TV had to chop, splice and match their treasure trove of recordings from disparate cultures together. What they were attempting to do, was create eleven musical tapestries. This was time-consuming, but was a labour of love for Graham Daniels and Mark Vidler. Eventually, Addictive TV’s musical tapestry was complete and became Orchestra Of Samples.

For Graham Daniels, Orchestra Of Samples was more than an album. “It is about bringing people together, and creating something that you didn’t know you could. Music binds us all, it’s the one language on our planet we all speak.” That is certainly the case, with musicians from as far afield as Bhutan, Brazil, Britain, France, Israel, Senegal, Spain and Turkey joining together to speak the universal language of music on the eleven tracks on Orchestra Of Samples.

Opening Orchestra Of Samples is the title-track, which features the Bhutanese Himalayan village choir. Straight away,  a myriad of disparate tradition instruments flit in and out. This ranges from a stringed instruments to percussion and drums. They set the scene for an ethereal, cooing vocal, before the heart-wrenching and soulful sound of the choir. Later, the ethereal vocal takes centre-stage as the song reaches a crescendo, and in doing so, sets the bar high for the rest of the album.

Spanish musician, Daniel Salorio plays Hang drum on Hangman, and soon, is joined by a bass as the song builds, and begins to reveal its secrets. Handclaps, drums and percussion play their part in a melodic backdrop. Soon, a sample of a tender vocal soars above the arrangement and scats as the arrangement is stripped bare. It has a crackling sound that is reminiscent of old vinyl record. This is an old trick that’s been used before, but works well. When the arrangement rebuilds, elements of dub, African music and Eastern sounds are combined to create a truly memorable and melodic dance-floor friendly track.

Samples of a souk and the sound of traffic give way to conversation about life in Istanbul on Eastern Baschet. It’s replaced by keyboards, drums, traditional stringed instruments and percussion as the tempo builds. Soon, they’re joined by violins that help drive the arrangement along. Suddenly, the arrangement becomes understated as a haunting vocal enters. It drops out only to reappear as the arrangement builds. By then, pounding drums, atmospheric keyboards, traditional instruments and a vocal sample combine to create an irresistible multicultural musical potpourri.

Just Kounta Dieye’s lone kora opens with Kora Borealis. His fingers fly up and down the twenty-one strings of the kora before the arrangement builds. Drums pound, cymbals crash, a synth growls and Matador lays down a rap. He’s accompanied by soulful harmonies, before the arrangement ebbs and flows. Playing leading roles in this genre-melting track are Kounta Dieye’s kora and Senegalese rapper Matador.

The sound of waves breaking on beach and children playing opens Beachcoma. This gives way to Laetitia Sadier’s heartfelt vocal, which is accompanied by slow hypnotic drums, percussion and a guitar.Later, a ruminative horn plays as the arrangement meanders along, showcasing its dreamy, atmospheric sound.

Just a fiddle opens Rapscallion, before drums enter and crack. They set the scene for hip hopper Milk, Coffee and Sugar, who adds a rapid fire rap. The combination of the fiddle and the rap may sound like unlikely bedfellows, but they work well together. So does the addition of pizzicato strings and a wistful trumpet. When the trumpet drops out, another rap in unleashed. This is the signal for the understated arrangement to build before it reaches a crescendo.

A choppy acoustic guitar plays as Sundown (That’s A Fact) unfolds. The guitar ushers in a soulful vocal, while a bass underpins the arrangement and a thoughtful flute and percussion plays. By then, the vocal is heartfelt and soulful as the arrangement flows along and a melodic song unfolds. Midway through the song, the arrangement becomes understated and spacious. Instruments flit in and out, before the arrangement gains momentum. Soon, the melodic, sunshine soul of earlier makes a welcome return.

Vocalists Andrea Dos Santos and Theo Hakola feature on The American. It opens with a tack piano playing, which sets the scene as Andrea Dos Santos’ vocal plays a leading role. Meanwhile, drums add a brief burst of drama and are replaced by stabs of melancholy harmonica while the piano and bass play. Later, thunderous drums return and accompany an impassioned, emotive vocal. Later, when the vocal drops out, just a bluesy, wistful harmonica, moody bass and flourishes of piano remain, and close this carefully crafted track.

Who needs a guitar hero, when Sitar Hero Baluji Shrivastav is around? He unleashes a fleet-fingered solo as drums pound and join with synths that beep, buzz and squeak. Soon, the sitar is replaced by a vocal, before the baton passes to pulsating synths and a flawless sitar solo. Still drums pound and sci-fi synths accompany the Sitar Hero. By then, it’s a case of all hail the Sitar Hero, in what could very well be an unlikely club hit.

Closing Orchestra Of Samples is Herbal Haze, which has an understated introduction before Nir Yaniv adds an impassioned vocal. Soon, the arrangement bursts into life as drums pound, cymbals crash as pulsating, bubbling, growling and sci-fi synths are added. Later, a flute flutter above the arrangement and adds another contrast. So does Nir Yaniv’s vocal, which is a mixture of power and emotion as the arrangement is powered along. Fittingly, there’s even a burst of searing guitar during this alternative homage to guitar hero, Jimi Hendrix. It’s without doubt, one of the highlights of Orchestra Of Samples, which marks the debut of Addictive TV.

This ranges from traditional and avant-garde instruments to vocals, raps and samples of everyday life. Listen carefully and the sound of waves crashing on a beach and sound of traffic in Istanbul can be heard on Orchestra Of Samples. Each of these sounds play their part in a captivating cross-cultural project, Orchestra Of Samples which was released on the K7! label on the ‘2nd’ of June 2017.

Hopefully, Orchestra Of Samples will find the audience it deserves. It’s a captivating album that features a treasure trove of sounds and sonic surprises from a multicultural cast of musicians, vocalists and rappers. They may come from far-flung places and speak different languages, but share a love of music. It’s a universal language that musicians worldwide understand. A reminder of that is Orchestra Of Samples, which is an exchange of musical ideas that features musicians from five continents. These musicians join Addictive TV, and achieve Unity Through Music, on Orchestra Of Samples, which features a myriad of master musicians, including The American and a Sitar Hero, who help weave this vibrant musical tapestry. 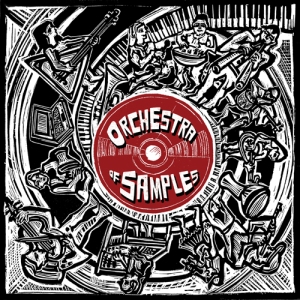