Nowadays, cultural diversity is a feature of many modern countries, with people from all over the world travelling to Britain, Europe and North America to begin a new life and forge a better future for their family. In many cities and towns, those that have just arrived, are welcomed with open arms and become part of a culturally diverse twenty-first century society. Sadly, though, not everyone welcomes cultural diversity.

Even in 2018, intolerance is still rife in many countries around the world, and sometimes this intolerance can result in discrimination, persecution and can even lead to violence. It’s a sad state of affairs, especially considering the seven billon people that inhabit planet earth are united in their difference and uniqueness. Kiran Ahluwalia realised this when she was writing the title-track to her seventh album Seven Billion, which will be released on the ‘5th’ May 2018, by the Six Degrees label. This is the latest chapter in Kiran Ahluwalia’s musical journey.

It’s a journey that began in India, which was where Kiran Ahluwalia was born and first embraced music at an early age. “When I was growing up in India there were concerts that people from all over would crowd into. These concerts featured a repertoire, language and content that was both demanding and beyond the experience of a child. I was, however, entranced by the sound and feel of the music, even from an early age. My father would play tapes of Indian music for me and we would also listen to Bollywood on the radio. So when a song came on that I wanted to learn, my mother would quickly write down the lyrics for me and I would sing along to learn the melody.”

By the time Kiran Ahluwalia was seven, she was already immersing herself in Indian music, which she heard each and every day.  Already music played an important part in Kiran Ahluwalia’s life, and this continued when her facility emigrated to Canada, where they embarked upon a new life.

In Canada, Kiran Ahluwalia began a new life, but one thing remained the same, her love of music. She continued to study music, which she fitted around her regular schooling. After leaving high school, Kiran Ahluwalia enrolled at the University of Toronto where her education continued.

Kiran Ahluwalia’s biggest fear was that one day she would regret not following her dreams of a making a career out of music. By then, she had a successful career as a trader, which was a lot to give up. However, eventually, after much thought Kiran Ahluwalia decided to follow her dreams, and try to make a living out of music.

This was a huge gamble, even for someone who had previously worked as a city trader and obviously wasn’t risk averse. However, the music industry had been transformed in the past few years with the advent of the internet and downloads. Suddenly, albums were no longer as profitable as they once were and even major labels were having to rethink their business plans. It was against this background that Kiran Ahluwalia released her debut album.

Four years later in 2003, and Kiran Ahluwalia returned with her sophomore album Beyond Boundaries. It was an innovative album that was hailed as “Beyond Traditions, Beyond Trends, Beyond Boundaries” and featured ghazals and Punjabi folk songs from India, Pakistan and Canada. Once again, Kiran Ahluwalia brought the lyrics to life as she breathed meaning and emotion into the lyrics on an album that introduced her music to a wider audience and in 2004 won Canada’s prestigious Juno award for the Best World Music Album Of the Year. This was a huge boost to Kiran Ahluwalia’s career.

By the time Kiran Ahluwalia released her fourth album Wanderlust in August 2007, she was living in New York with her husband and bandleader and musical collaborator, Rez Abbasi. This time around, ghazals were joined by Portuguese fado music which Kiran Ahluwalia had discovered and become fascinated with. Fado translates as fate, and although fado music is impassioned it’s full of sadness, melancholy, hurt and heartbreak. The addition of the three fado songs which were played by a trio of Fado masters were part of Kiran Ahluwalia’s most eclectic album, Wanderlust.

There were elements of everything from African and blues to Brazilian Bossa Nova and Indian classical music. Some of the vocals seemed to have been influenced by vintage soundtracks as Kiran Ahluwalia reinvents herself with one of her finest, and definitely her, most eclectic album.

Three-and-a-half years later, and Kiran Ahluwalia returned with her fifth album Aam Zameen: Common Ground in January 2011, which was another album of contemporary Urdu and Punjabi poetry. Just like Kiran Ahluwalia’s two previous albums, there were several collaborations on Aam Zameen: Common Ground. This includes ritti player Juldah Camara plus Malian desert bands Tinariwen and Terakaft, who provide the Tuareg grooves as Kiran Ahluwalia delivers heartfelt and powerful  vocals as she sings ghazals and Punjabi folk songs. The result was another captivating cross-cultural collaboration from Kiran Ahluwalia, which in 2012, won Canada’s prestigious Juno award for the Best World Music Album Of the Year for the second time.

It wasn’t until October 2014 that Kiran Ahluwalia returned with her sixth album Sanata : Stillness. This was the long-awaited followup to her award-winning album Aam Zameen: Common Ground.

Sanata : Stillness was another fusion of disparate musical genres with ghazals and Punjabi folk songs combining with Saharan tuareg music, Indian classical and elements of jazz music. The result was a beautiful, mesmeric and mellow album which was one of Kiran Ahluwalia’s finest albums.

Now three-and-half-years later, and Kiran Ahluwalia is back with her seventh album 7 Billion, which is full of powerful and thought-provoking music. This is something that Kiran Ahluwalia has specialised in during a career that has spanned nearly two decades and six albums. However, six becomes seven when 7 Billion is released on the ‘5th’ of May 2018.

7 Billion which features six songs, including five penned by Kiran Ahluwalia, is another genre-melting album, which feathers a variety of musical influences. This includes the Punjabi folk and Indian classical music that has been a feature of Kiran Ahluwalia’s previous albums. So too has Malian influences, with Tuareg music featuring on Aam Zameen: Common Ground and Sanata : Stillness. That is the case on 7 Billion, which also features other musical genres that have featured on Kiran Ahluwalia’s previous albums, including blues and jazz. However, for the first time, Southern Soul provides the heartbeat to a couple of songs on 7 Billion.  Kiran Ahluwalia explains: “I’ve taken aesthetics I love such as blues, Malian styles, and of course Indian forms and mashed them together in my own way.” The result is a carefully created and captivating genre-melting.

Recording of 7 Billion took place at Canterbury Music Company, in Toronto, with guitarist Rez Abbasi taking charge of the arrangements and production. He was joined in the rhythm section by drummer Davide Direnzo and bassist Rich Brown. They were augmented by organist, accordionist and synth player  Louis Simao, percussionist and djembe player Mark Duggen and Nittin Mitta on tabla. This small but talented band recorded 7 Billion, which is Kiran Ahluwalia’s seventh album.

7 Billion opens with Khafa, which is a heartfelt plea from Kiran Ahluwalia to set aside and forget about the religious strictures and orthodoxies that mean people are unable or unwilling to see one another’s humanity. Kiran Ahluwalia was inspired to by West African music, and “I came up with the melodic idea and would hum it around the house. Rez said, ‘Hey, that sounds great.’ I had all these phrases all over the place, then I decided to develop it more to find meaning for the melody, which lent itself very well to talking about anger against the man-made rules of religion.” The result is a powerful and thought-provoking song that will strike a chord with many people.

Equally thought-provoking and powerful is Saat (Seven) where Kiran Ahluwalia deals with intolerance and violence that continues to blight society worldwide in 2018. This is something Kiran Ahluwalia believes that has to be addressed and countered,  as people are spending too much time focusing on divisions and difference. Instead, they should realise that it’s the differences and uniqueness which unites the 7 Billion people on planet earth.  Kiran Ahluwalia explains: “There are seven billion of us now on Earth and every person has their own unique perspective and set of experiences. We each have our own way of dealing with things, of hearing things, of moving through life.”

From the opening bars of Kuch Aur (Something Else), it’s apparent something special is unfolding. The arrangement is bluesy with the Hammond organ adding a Southern Soul influence, while Kiran Ahluwalia delivers one of her most soulful and emotive vocals as she examines regret and sorrow. While some of the lyrics were written in English, they were later translated into Urdu and seem to flow as Kiran Ahluwalia delivers a soul-baring vocal on a song that combines elements of blues, Southern Soul, Southern rock and Indian music.

Very different to the previous track is Raina (Night), which features an understated arrangement where an acoustic guitar, percussion and Indian percussion accompanies Kiran Ahluwalia. Her tender vocal takes centre-stage during this beautiful, melodic ballad, and showcases one finest Indian vocalists of her generation.

Despite her career as a singer-songwriter spanning nearly two decades, Kiran Ahluwalia had never been asked to write a song for a movie. That was until recently, when she was asked to write a song that will provide the accompaniment to a scene where a shy lover is seduced. The song she wrote was Jhoomo (Sway), a  sensuous and seductive sounding song, which is Kiran Ahluwalia’s first venture into the world of film.

Closing 7 Billion is We Sinful Women a song which was commissioned The Kathak Ensemble dance company. Although Kiran Ahluwalia wrote the music, the lyrics were inspired by a poem that was written by the Pakistani feminist poet Kishwar Naheed. They provide the basis for an urgency, catchy and melodic genre-melting song where Kiran Ahluwalia delivers a defiant, powerful vocal and combines with her band to create a genre-melting song. It features everything from funk, Indian, jazz and Southern Soul and Tuareg music, and is potent and heady brew that closes 7 Billion on a high.

After a three-and-half-year absence, Kiran Ahluwalia returns with her long-awaited and much-anticipated seventh album 7 Billion. It will be released by Six Degrees Records on ‘5th’ May 2018, and is another carefully crafted, genre-melting album from one of the greatest Indian singers of her generation.

7 Billion finds Kiran Ahluwalia combining elements of Indian, African, and Malian music with blues, funk, jazz, R&B, Southern rock and Southern Soul. The result is an album of music that veers between beautiful, cinematic and melodic to sensuous and seductive, to poignant, powerful and thought-provoking as she addresses some of the problems facing the world in 2018. This Kiran Ahluwalia manages to do during an album that features just six songs that last thirty-one minutes. 7 Billion is an old school album where the emphasis is on quality rather than quantity as singer, songwriter and world citizen Kiran Ahluwalia makes a welcome return with one of her finest albums of her career. 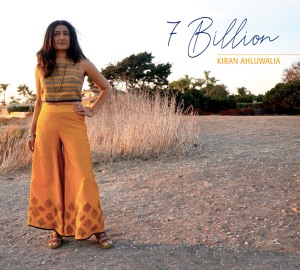 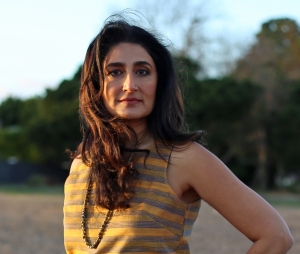 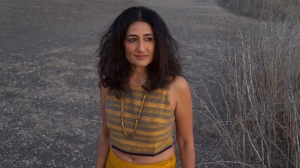