Having released eleven albums in eleven years, Can called time on their career in 1979. By then, Can were rightly regarded by critics as one of the most important, influential and innovative bands of the Krautrock era. However, like many of the Krautrock bands, Can hadn’t enjoyed the commercial success that their music had deserved. While their music found an a small, but discerning audience in Britain and France, Can, like many of the other Krautrock bands had failed to find audience in Germany. This was disappointing, just like the demise of Can the group that Holger Czukay cofounded.

After the demise of Can, Holger Czukay dusted himself down after two years where he was marginalised in the group he cofounded.“During the recording of Out Of Reach, I felt an outsider in my own group. I was on the outside looking in. I was on the margins. All I was doing was adding sound-effects.” Holger Czuaky felt his group had been hijacked by Rosko Gee and Rebop Kwaku Baah and  things got so bad, that Holger quit Can.

Sadly, Rosko Gee and Rebop Kwaku Baah dominated Out Of Reach. Gone was the loose, free-flowing style of previous Can albums. Even Jaki Liebezeit’s play second fiddle to Baah’s overpowering percussive sounds. The only positive thing was a guitar masterclass from Michael Karoli. Apart from this, things weren’t looking good for Can. It was about to get worse though.

Unable to play with the necessary freedom Can were famed for, the two ex-members of Traffic stifled Can. Rebop’s percussion overpowers Jaki’s drums, which have always been part of Can’s trademark sound. At least Michael’s virtuoso guitar solos are a reminder of classic Can. A nod towards Carlos Santana, they showed Can were still capable of moments of genius. Sadly, there wouldn’t be many more of these.

Some time after the release of Out Of Reach, Can decided to release a new single. It wasn’t one of the songs on Out Of Reach. Instead, it was reworked version of Jacques Offenbach’s Can Can. This was somewhat surreal, and far removed from classic Can. They had moved far away from the music that featured on their golden quartet. Can’s loyal fans wondered what the future held for Can. Sadly, Can would breakup after their next album.

Following the commercial failure of Out Of Reach, the members of Can began recording what became their tenth album, Can. Remarkably, Rosko Gee and Rebop Kwaku Baah were still part of Can. Sadly, Holger was not longer a member of Can. He had left during the making of Out Of Reach. His only involvement was editing Can which was a travesty.

Neither Rosko Gee nor Rebop Kwaku Baah were suited to a band like Can. Both came from a very different musical background, and as a result the decision to hire them initially was flawed and questionable. Their playing on Out Of Reach was odds with the way Can played. They had spent their career playing with freedom that resulted in inventive and innovative music. The much more rigid style of Rosko Gee and Rebop Kwaku Baah stifled the other members of Can. To make matters worse, their playing overpowered the rest of Can, and was one of the reason’s for the album’s failure. Yet when recording of Can began, Rosko Gee and Rebop Kwaku Baah remained.

Can, which is sometimes referred to as Inner Space, was released in July 1979. Again, critics weren’t impressed by Can, and the album received mixed reviews. No longer was Can the critic’s darlings.

The music on Can was a fusion of avant-garde, electronica, experimental, psychedelia and rock. Add to that, a myriad of effects including distortion and feedback, and here was an album that divided the opinion of critics. While the critics agreed, it was better than Out Of Reach. They also agreed that Holger was sadly missed.

Even Holger’s renowned editing skills couldn’t save Can. Try as he may, he could only work with what he was given. He did his best with Can, which the eleventh album from the group he co-founded. By the time Can was released, Holger: “had come to a realisation, that it was time to go his own way.” Holger describes this as “necessary.”

Can had split-up after the release of Can. That was their swan-song. However, even before that, Holger: “felt marginalised, this had been the case since Rosko Gee and Rebop Kwaku Baah became part of Can. They had hijacked Can,” and ultimately, this lead to the death of a great and innovative band.

Holger Czukay hadn’t really been making music since 1976, and had edited the last two Can albums. This meant that Holger Czukay had to find “his own sound again.” He had “been through this with Can,” Now he’d have to do so again. It would be worth it though, when he released his first solo album since 1969s Canaxis 5, Movies!

When Holger Czukay released his much-anticipated sophomore album Movies! to widespread critical acclaim and was hailed as one of the best albums of 1979. It was an eclectic album described as variously psychedelic, cinematic, melodic, moody, understated and progressive, here was the next chapter in Holger’s musical career. The one track that everyone agreed was a minor masterpiece was Cool In The Pool. It was Movies’ Magnus Opus.  Holger’s decision to embark upon a solo career had been vindicated. He was back doing what he did best, creating ambitious, groundbreaking and pioneering music. That would continue in 1981, when Holger released On The Way To The Peak Of Normal.

On The Way To The Peak Of Normal.

For Holger, 1981s’ On The Way To The Peak Of Normal was “one of the albums I’m most proud of. It was also Holger’s first collaboration with Conny Plank

Working with Conny Plank Holger remembers, was a revelation. Holger felt Conny was a consummate professional. “Here was someone who understood what I was trying to achieve.” He ensured that I never made music people neither understood, nor wanted to buy. The sessions were organised and disciplined, very difference from the indiscipline of late Can albums.”

Recording took place in the familiar surroundings of Inner Space Studios, Cologne. The only member of Can were present was Jaki Liebezeit. Other members of the band included Conny Plank and Jah Wobble, who Holger and would collaborate with on 1982s Full Circle and the 1983 Snake Charmer E.P.

Before that, Holger released On The Way To The Peak Of Normal in 1981. Just like the early days of Can, Holger was once again, the critic’s darling.

Although Holger had been making music for three decades, he still had plenty to say musically. This included when Holger Czukay collaborated with Jah Wobble, Jaki Liebezeit on the album Full Circle which was recently reissued by Gronland Records.

Holger Czukay had collaborated with Public Image Limited’s bassist Jah Wobble and former Can drummer Jaki Liebezeit on his third album On The Way To The Peak Of Normal. They had enjoyed working together and decided to record an album which reflected their respective musical backgrounds and influences.

Holger Czukay and Jah Wobble wrote How Much Are They?, Where’s the Money, Trench Warfare and Twilight World. They also joined forces with Jaki Liebezeit to write Full Circle RPS (No 7) and Full Circle RPS (No 8). These six tracks were recorded at Can’s Inner Space Studio, Cologne,

When Full Circle was released in 1982, it was hailed a groundbreaking album of innovative music by critics as dub and Krautrock melted into one. Scratch below the surface and elements of avant-garde, electronica, experimental and rock can be heard on Full Circle. It features multilayered soundscapes that are dreamy,dubby, filmic,futuristic, lysergic, otherworldly and was full of subtleties and surprises. Full Circle was a truly groundbreaking album.

Sadly Full Circle wasn’t the commercial success that it deserved to be, and this crucially critically acclaimed collaboration between Holger Czukay, Jah Wobble and Jaki Liebezeit hasn’t found the audience it deserved. It’s shades of Can, before their music started to receive the recognition it deserved.

As for Full Circle, it’s always been an underground album, appreciated by a small coterie of music lovers who understand and appreciate the combined talents of the three musical innovators of Holger Czukay, Jah Wobble, Jaki Liebezeit who were responsible for an early eighties cult classic. 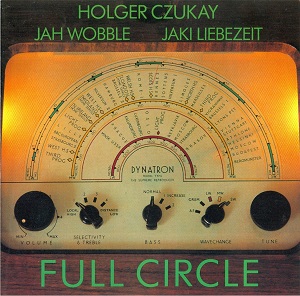