In the summer of 1978, a musical revolution took place in Japan, which changed music forevermore,..punk. The Japanese punk rockers were christened Tokyo Rockers, and initially were disregarded by the mainstream music industry. Record company executives made the mistake of thinking that the Japanese punk movement was just a passing fad, and that before long, it would be replaced by another musical movement. How wrong they were.

Left to their own devices, a vibrant and thriving underground music scene was born. Over the next few years, the Tokyo Rockers headed to underground clubs, which were similar to the ones frequented by British punks just a couple of years earlier. The Tokyo Rockers saw an eclectic selection of bands ranging from the new punk groups through to avant-garde bands and even on occasions, indie rockers. It was a fascinating scene populated by of independent and individualistic musicians who were keen to make an impression on the audiences. Some bands however, stood out from the crowd, including Maria 023, a male-female duo.

Maria 023 were just one of many bands who had caught the imagination of the Tokyo Rockers. Their lineup featured Genet and the bassist Non. She and Genet released the EP, Maria 023, which was released on  Gozira Records in 1978, featured Theme and Human Being with Machine Sex and Face To Face on the B-Side. This was their one and only release, because Maria 023 proved to be a short-lived band.

During the short time that Maria 023 were together, they made a lasting impression on the Tokyo Rockers. Especially Maria 023’s  bassist Non, who had come close to becoming a cult figure. However, when Maria 023 split-up, nothing was heard of Non until August 1979.

Non made her comeback at a legendary concert, Drive To 80s. Nobody was aware that Non was about to make her comeback that night, until she took to the stage. Accompanied by just her bass, she stood centre-stage, and sung several new songs during an intense, emotive and highly charged performance. When Non left the stage that night, little did she know that this was the start of a new chapter in her career.

Over the next few months, Non played a series of solo gigs. Non would pitch up at the venue with just her bass, and sing her new songs. By then, she was a talisman figure and role model amongst the female Tokyo Rockers. They admired and were inspired by Non, who they saw as a strong, independent young woman. For many female Tokyo Rockers, Non was everything they wanted to be, if they had been able to cast off their inhibitions. As a solo artist, she was already one of the leading lights of the Japanese punk movement. Soon, though, Non would form a band that would write their way into Japanese musical history…Non Band.

It was almost inevitable that Non would make the move from solo artist to founding her own, new band. Just like many new bands, it took several changes in lineup before they arrived at a settled lineup. By then, the Non Band’s lineup featured drummer Mitsuru Tamagak, bassist Non and Kinosuke Yamagishi who switched between clarinet and violin. This was the classic lineup of the Non Band, and the one that found the group at the peak of their musical powers. However, music was changing within Japan.

By then, the Japanese punk and new wave rock scene was evolving, and moving in a new direction. Many new bands were also being formed, including the second generation of bands. This was similar to what had happened in Britain. Just like in Britain, many new independent labels were also being formed and offered bands, old and new, an outlet for their music. This included Telegraph Records, which had been formed by Jibiky Yuichi in 1981. He then started putting together a distribution network for the records he planed to release.

Ever since forming Telegraph Records, Jibiky Yuichi had been watching the progress of Non Band. He was a fan of their music, and deep down, had always hoped that one day, he would be able to release a Non Band album. However, with so many new independent labels being founded, the best bands could have their pick of labels. The Non Band were one of the best bands, and convincing the Non Band to sign to a relatively new label wasn’t going to be easy.

Jibiky Yuichi proved persuasive and the Non Band eventually signed to Telegraph Records. Having signed a recording contract, the next step was for the Non Band to record their debut album.

Recording began at the Mod Studio, in Tokyo, in October 1981. The Non Band’s lineup featured drummer and percussionist Mitsuru Tamagak, Non who played bass, guitar and added vocals, plus  Kinosuke Yamagishi who played clarinet, violin and mandolin. They were augmented by Chiko Hige who played mini keyboards plus Kummy and Mitsuwa who added the chorus. Producing the album was the Non Band, who completed their eponymous debut album in November 1981.

Three months later, and the Non Band and Telegraph Records were preparing to released their eponymous debut album in February 1982. This was step into the unknown for Non Band, while Telegraph Records the album was the label’s fifth release. Unlike most albums being released in 1982, a decision had been made to release Non Band as a ten inch album. It featured six songs from the Non Band, which it was hoped would introduce their music to a wider audience.

Although Non Band were primarily a punk group, their eponymous debut album was much more than a punk album. There were elements of the post punk and new wave sounds, and occasional diversions into funk, free jazz, traditional Japanese music and even some poppy hooks. Very occasionally, Non Band took on a jazz and experimental sound and headed in the direction of avant-garde. Mostly, Non Band evokes the spirit of ’78, when the punk arrived in Japan. However, music had changed by late 1981 when Non Band was recorded, and this explains why it’s such a genre-melting album. Non Band was much more than a punk album, that launched the career of punk pioneers Non Group.

Following the success of Non Band, it was a case of hail the conquering heroes when the group took to the stage. By then, Non Band’s lineup had been expanded when two female rockers joined the group. Guitarist Kummy and keyboardist Mitsuwa joined Non Band at what proved to be the peak of their powers.

Everyone within the Tokyo Rockers’ scene expected the Non Band to go on to even greater success. Non Band was surely, the first of many critically acclaimed albums. Sadly, that wasn’t to be. Six months after the release of the Non Band, the Non Band was no more.

When members of the band departed, Non struggled to find suitable replacements. Eventually, she realised that it was an uphill struggle, and the Non Band disbanded. It was the end of the line for a truly innovative band. They went out at the peak of their powers, unlike some of their British counterparts who in similar circumstances, struggled on and became a parody of their former selves.  Not the Non Band. They weren’t going to fade away,  and went out at the top.

Non drifted away from the Tokyo Rockers’ scene, and returned home to Hirosaki in the south-west Aomori Prefecture, of Japan.  This was the start of another new chapter in Non’s life. She settled down and raised two children, and eventually, took over the running of the family business. The former Tokyo Rocker now found herself running an arts supplies business. While she was happy in her new life, it was almost inevitable that Non would one day, contemplate a comeback.

It wasn’t until 1999 that Non started to think about her former life as a musician. She realised that she missed music, and began putting plans in place for the second coming of Non.

Twenty years after her triumphant comeback at Drive To 80s in August 1979, Non went in search of like-minded musicians. She found Keiji Haino and Tatsuya Yoshida, who Non invited to her home in Hirosaki. They began playing live together, and sometimes, Non played solo gigs. The second coming of Non was well underway.

Non returned to Tokyo, where she had made her name in the late-seventies, but this time as a solo artist. Fans of the Non Band awaited her first appearance in Tokyo in two decades. As Non took to the stage, she was welcomed by fans old and new. It was a triumphant return, and Non’s comeback was almost complete.

The only thing that Non still had to do was release her debut solo album. That came in 2002, when Non released her much-anticipated debut album Ie. It received praise and plaudits, thanks to songs like Vagabond, Love Song and OK Song. Non’s comeback was complete. However, now that Non was back, she was here to stay, she was about to hatch a new plan.

Despite establishing herself as a successful solo artist, Non had unfinished business from twenty years ago. She decided it was time to make two phone calls. However, she didn’t know what response she would receive when she called Mitsuru Tamagak and Kinosuke Yamagishi. They were pleased to hear from Non, and agreed to reform the Non Band.

Just like their final performances in 1982, the original trio was expanded, with accordionist Emi Sasaki joining the Non Band. The newly expanded lineup of the Non Band booked a few comeback gigs, after twenty years away.

After the comeback gigs, the Non Band decided that they were back for good. There was a caveat though. They weren’t going to embark on gruelling tours each year, and instead, would play just a few gigs each years. This was what the Non Band have been doing ever since, and in 2012, a live album Non Band Liven’ 2009-2012 was issued on Jibiky Yuichi’s Telegraph Records which had also made a comeback. The release of Non Band Liven’ 2009-2012 was a reminder of just how good a live band the Non Band were.

While the Non Band continued to play a few gigs each year, Non continued to work as a solo artist, and in 2014, self-released her long-awaited sophomore album Non Solo Song Book. It featured seventeen new songs, including Earth Song, ほいかん and 善でも悪でもない精霊 which featured the All Aomori Survivors, who had all survived the 2011 tsunami. They played their part in the sound and success of the Non’s sophomore album. When  Non Solo Song Book was released in 204, it was welcomed by Non’s fans. So would another album three years later.

Nowadays, interest in the Non Band is greater than ever. Especially, their eponymous debut album Non Band which is a groundbreaking timeless genre classic and is the first chapter in the Non Band story which began forty-one years ago in 1978. 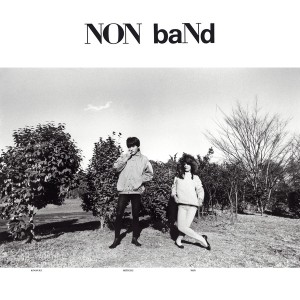