During the seventies and eighties, the Tabansi label was, without doubt, the most important and influential Nigerian record label, and consistently released groundbreaking music. Tabansi also discovered and nurtured many of Nigeria’s most successful artists. However, Tabansi also released albums by artists and bands from other parts of Africa, including Ghana.

Very little is known about  the Dytomite Starlite Band Of Ghana, which is thought, consists of just two musicians. They were joined in Tabansi’s recording studios by a highlife band. Sadly,  nobody knows who played on this stunning album which is a delicious fusion of Ghanian vocals, highlife and a masterclass from keyboardist and producer Jake Sollo, who took charge of many production on many of Tabansi’s releases. Apart from Jake Sollo, nothing is known about the personnel who feature on Dytomite Starlite Band Of Ghana. There’s previously been speculation that the recording may feature the Tabansi Studio Band, which in the early eighties, included the supremely talented and versatile Martins Brothers. However, what can be said with the utmost certainty is that Dytomite Starlite Band Of Ghana is a stunning album that oozes quality from the opening bars of Amanfoo to the closing notes of Meye Meho Ayie.

Dytomite Starlite Band Of Ghana is a genre-melting album which is a fusion of Accra highlife which was popular in the late-seventies and early eighties. To that, add a horn section that sounds as if they should be playing on a recording of South African township jive, while the clave patterns have an obvious Afro-Cuban sound. Al this results in music that is various beautiful, emotive,  joyous, uplifting and truly irresistible.

It’s no wonder that original copies of Dytomite Starlite Band Of Ghana are so sought after, and collectors are willing to pay such high prices for a copy.  Dytomite Starlite Band Of Ghana is an oft-overlooked, hidden gem from the Tabansi vaults, and is an album that belongs in the collection of anyone who loves African music, highlife or just loves, enjoys and appreciates good music. 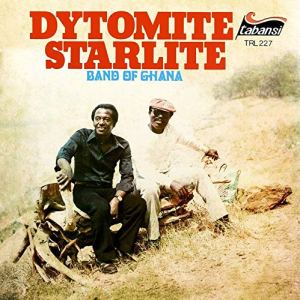