FIFTY YEARS AGO IN 1969 FREE RELEASE TONS OF SOBS

Fifty Years Ago In 1969 Free Release Tons Of Sobs.

It’s not often that someone get the opportunity to witness history being made. Those that happened to be in the Nag’s Head pub, in Battersea, London on 19 April 1968 saw history being made. They watched as four young men took to the stage for the first time. What some members of the audience noticed was how young the band were.

Two of the band didn’t look old enough to buy a round in the Nag’s Head. Especially the bassist. Andy Fraser was just fifteen. His partner in the rhythm section, drummer Simon Kirke, was eighteen. Lead guitarist Paul Kossoff was just seventeen, while the vocalist Paul Rodgers was just eighteen. Many of the regulars were veterans gig goers, and weren’t expecting much of the young band. They were in for a pleasant surprise as the young blues rock made their debut. However, nobody present that night what would happen over the next five years.

By November 1968, Alexis Korner had christened the nascent band Free. They would sign to Island Records in 1969, and later that year, recorded their debut album Tons Of Sobs. It would be released in 1970, and the first of six studio albums and one live album Free released between 1969 and 1973. During that period, the band broke up, the lineup changed several times and Free sold twenty-million albums. Sadly, Free split-up in 1973, and that was the end of the road for the hard rock pioneers.

Having recently signed to Chris Blackwell’s Island Records, London-based blues rockers Free entered the Morgan Studios, in London with producer Guy Stevens. He had been allocated a budget of just £800 to produce what became Tons Of Sobs. This was going to be a challenge.

Free were one of the youngest bands Guy Stevens had worked with. Despite their youth, Free had spent the last few months playing live. This allowed them to hone their sound and set. That set Free would replicate at Morgan Studio.

Free’s set included a number of tracks by lead vocalist Paul Rodgers. He wrote Over the Green Hills (Pt. 1), Worry, Walk in My Shadow, Sweet Toot and Over The Green Hills. Paul Rodgers also cowrote three other tracks. This included Wild Indian Woman and I’m A Mover with Andy Fraser plus Moonshine with Paul Kossoff. The other two tracks were cover versions. They were St. Louis Jimmy Oden’s Goin’ Down Slow and The Hunter which was penned by the Stax Records’ house band by Booker T. and The MGs. This combination of cover versions and new songs would become Free’s debut album Tons Of Sobs.

With such a limited budget, Guy Stevens decided to take a minimalist approach to recording Tons Of Sobs. This he hoped, would allow him to replicate how Free sounded live. Their sets showcased the blues rock sound that was then popular in late-1968.

When Free arrived in the studio, drummer and percussionist Simon Kirke joined bassist and pianist in the rhythm section. Meanwhile, Paul Kossoff switched between lead and rhythm guitar. Paul Rodgers took charge of the lead vocals. As Free played, they were loud, raw and far from polished. That was no surprise given Free’s youthfulness and inexperience. Given time and a bigger budget, Guy Stevens could’ve overcome this.There was a problem though.

Island Records expected all producers to complete an album on time and within budget. It didn’t matter who the artists was, whether they were making their debut or were veterans. Guy Stevens succeeded, and Tons Of Sobs was completed in December 1968. However, given more time and money, Guy Stevens could’ve produced a much slicker, polished album. In a way, this was just as well, as Tons Of Sobs was representative of Free in the early part of their career.

Just three months after the completion of Tons Of Sobs, Island Records were preparing for the release of Free’s debut album. It was scheduled for release on 14th March 1969. The reviews had been mixed.

In Britain, Tons Of Sobs had been well received by critics. They were won over by Free’s raw and raucous blues rock sound. However, across the Atlantic, Rolling Stone magazine weren’t impressed by Tons Of Sobs. This was no surprise. The magazine seemed to dislike any British blues rock band. Free were just the latest to incur the wrath of Rolling Stone. This was disappointing, as it was an influential publication in America, and could affect sales of Tons Of Sobs.

Ironically, when Tons Of Sobs was released on 14th March 1969, the album fared better in America than Britain. Tons Of Sobs failed to chart in Britain, but crept into the US Billboard 200 at a lowly 197. For Free and Island Records, the commercial failure of Tons Of Sobs must have been a huge disappointment. Despite this, Free continued to record their eponymous sophomore album.

For Free, Tons Of Sobs was just the start, and they went on to release six studios albums and one live album during the five years they were together. During that period, there were highs and lows, bust ups and betrayals, and triumph and tragedy. Free had split-up once before, and the lineup had changed. However, the one constant had been the music.

Free’s music evolved throughout the five years they were together. They began as a blues rock band, before the music began to evolve. Briefly, Free’s music moved towards folk rock. Mostly, though, their albums showcased classic rock, folk rock or hard rock. However, Free never quite turned their back on their early blues rock sound. Sometimes, Free eschewed their hard rocking sound for heartfelt balladry. This showed another side to one of the pioneers of hard rock, Free. Their music found a wide and appreciative audience.

Over the five years Free were together, they hardly stopped touring. That was apart to record six studio albums. Free seemed happiest as they toured the world, playing live. They played 700 arena concerts and festivals. The classic lineup of Free, drummer Simon Kirke, bassist, guitarist Paul Kossoff and vocalist Paul Rodgers were one of the hardest working bands. They’re also one of the most successful.

By the time Free called time on their career, they sold twenty million copies of Tons Of Sobs, Free, Fire and Water, Highway, Free Live!, Free At Last and Heartbreaker. Sadly, though, sometimes, Free are overlooked in favour of Led Zeppelin, Black Sabbath or Deep Purple. However, they enjoyed much longer careers than Free. They seem to have slipped under the radar, and nowadays, most people remember only two of their biggest hits,  All Right Now and Wishing Well. That however, is just a tantalising taste of the music Free released between 1969 and 1973.

During that four-year period, Free achieved more than most. After all, how many bands sell twenty-million albums during a four-year period? Free managed to do so during  a period where the competition was fierce. They were up against some of the biggest names in rock. Despite this, Free become one of the biggest and most successful British rock bands, and left behind a rich musical legacy that has stood the test of time including their debut album Tons Of Sobs.

Fifty Years Ago In 1969 Free Release Tons Of Sobs. 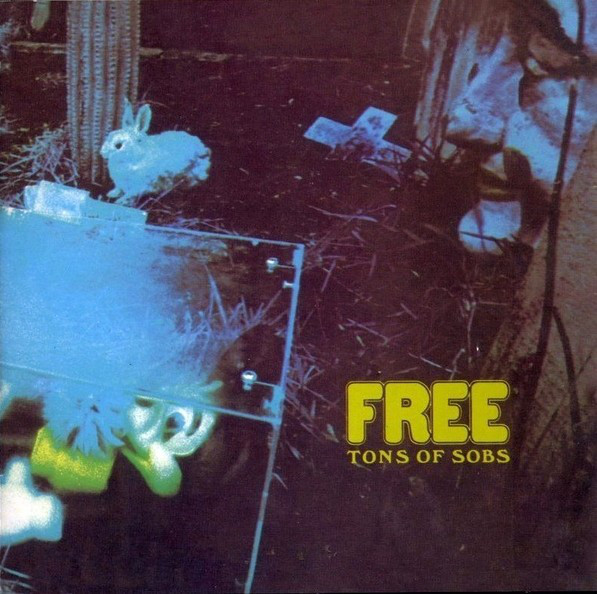