By 1974, Eric Clapton had established a reputation as a survivor. He had managed to overcome heroin and alcohol addiction. His life had spiralled out of control after releasing his debut solo album, Eric Clapton in August 1970. It reached number seventeen in Britain and number thirteen in the US Billboard 200. To onlookers, it looked as if Eric Clapton was going to enjoy the commercial success he enjoyed with Cream, Blind Faith and Derek and The Dominoes. Surely, a glittering career was about to unfold? Things however, didn’t work out like that.

Nearly four years would pass before Eric Clapton released another album. Very little was heard of Eric Clapton during that period. He made brief appearances at the Concert For Bangladesh in August 1971. By then, Eric Clapton was deep in the throes of heroin and alcohol addiction. He was also infatuated with Pattie Boyd, who was then married to his friend George Harrison. However, despite  Eric all but turning his back on music, George Harrison managed to convince Eric to play at the Concert For Bangladesh.

Eric’s appearance at  the Concert For Bangladesh didn’t quite go to plan, when he passed out on-stage. After being revived, he managed to continue his performance. That was the last time Eric Clapton played live for nearly two years.

It wasn’t until January 1973 that Eric Clapton made a comeback. During that period, Eric struggled with his drug addiction. Things got so bad, that Eric even sold some of  his treasured guitars. Then came the comeback, organised by Pete Townsend, The Who’s guitarist, organised the Rainbow Concert at London’s Rainbow Theatre. The Rainbow Concert was meant to help Eric beat his addiction to drugs and alcohol.

A year later, and Eric Clapton was no longer addicted to heroin. He had a new partner, Pattie Boyd, formerly the wife of George Harrison. The only downside was Eric started drinking heavily. However, for the first time for four years, Eric Clapton released an album, 461 Ocean Boulevard.

Having overcome his addiction to heroin, Eric was given a demo tape by his old friend, Carl Radde, who had  been the bassist in Derek and The Dominoes. On the tape, were a set of songs played by Carl Radle, keyboardist Dick Sims and drummer Jamie Oldaker.  They would form be the genesis for 461 Ocean Boulevard.

Now that Eric had decided to make a comeback, his manager Robert Stigwood decided to bring in producer Tom Dowd. Studio time was then booked at Criteria Sound Studios, Miami. At last, the man many music lovers called God,was ready tp return to the studios.

For 461 Ocean Boulevard, Eric recorded ten tracks at Criteria Sound Studios, Miami. Of the ten tracks that became 461 Ocean Boulevard, seven were cover versions. This included Bob Marley’s I Shot The Sheriff, and unsurprisingly, given Eric’s love of blues music, covers of Robert Johnson’s Steady Rollin’ Man and Elmore James’ I Can’t Hold Out. Other covers included Johnny Otis’ Willie and The Hand Jive, Charles Scott Boyer’s Please Be With Me and George Terry’s Mainline Florida. Eric wrote Give Me Strength, Let It Grow and cowrote Get Ready with Yvonne Elliman. The other track on 461 Ocean Boulevard was Motherless Child. It was rearranged by Eric and Carl Radle. These ten tracks would become 461 Ocean Boulevard.

On the release of 461 Ocean Boulevard, in July 1974, mostly the reviews were positive. Some reviewers remarked upon 461 Ocean Boulevard’s honesty. Others called the music groundbreaking. However, Eric couldn’t please all the people, all the time. A few reviewers accused Eric of hiding behind his band. They believed Eric’s playing had lost its sparkle. If that was the case,  that wasn’t surprising. After all, Eric had been to hell and back during the last four years. However, mostly, 461 Ocean Boulevard won over the hearts and minds of critics and record buyers.

I Shot The Sheriff was released as the lead single from 461 Ocean Boulevard. It reached number nine in Britain and number one in the US Billboard 100 charts. Then when Willie and The Hand Jive was released as a single, it reached number twenty-six in the US Billboard 100 charts. Eric Clapton’s comeback was complete. 461 Ocean Boulevard marked the return of the comeback King, Eric Clapton.

Opening 461 Ocean Boulevard is Motherless Child, a blues standard, first recorded by Blind Lemon Jefferson in 1927. The song is autobiographical, as Blind Lemon Jefferson’s mother died when he was young. Here, Eric and Carl Radle arranged Motherless Child. Blistering guitars are unleashed, as music lovers get a taste of what they’ve been missing for four years. Soon, the rhythm section of Jamie Oldaker’s drums and Carl’s bass power the arrangement along. They’re joined by washes of Hammond organ and scorching guitars that accompany Eric’s vocal. It’s tender and thoughtful. Eric eschews power, and in doing so, brings meaning to the lyrics. Then when Eric’s drops out, he and the rest of his band join forces. Before long, they’re in full flight. It’s a joy to behold. When  Eric’s vocal returns, it’s as if he’s been reenergised. He seems to be feeding off the rest of the band, in an attempt to reach the heights he’s previously scaled. In doing so, it’s obvious Eric’s comeback is well underway.

Give Me Strength is one of two tracks Eric wrote himself. A slide guitar, slow hypnotic drums and a Hammond organ set the scene for Eric’s vocal on what’s a very personal track. Recovering from heroin addiction, Eric is in a fragile state. The slightest thing could set him back. Almost pleading, he sings “Give Me Strength to carry on.” As he delivers these lyrics, the track takes on an almost spiritual quality and you empathise with Eric’s plight.

The Johnny Otis’ penned Willie And The Hand Jive, might seem a strange choice for Eric to cover. However, Eric was always a fan of blues and R&B. Johnny Otis’ name was synonymous with blues and R&B. Here, Willie And The Hand Jive is transformed, and becomes a slow, laid-back track. Guitars chime, before the bass rhythm section and washes of guitar combine with Eric’s vocal. Soon, he’s ensuring the song swings. Carl Radle’s bass and Dick Sim’s Hammond organ play important parts, as this oft covered track is given a makeover.

Get Ready was written by Eric with Yvonne Elliman, who also shares the lead vocal. Shakers set the scene for the rhythm section, a chugging Hammond organ and searing guitars. They provide a dramatic backdrop for Eric’s vocal. He’s had his heartbroken, and has his mind set on revenge.  However, he’s not the only one. When Yvonne’s vocal enters, it’s far from a case of mea culpa. No. She’s also looking for revenge. Anger and frustration fill her vocal. later,  when Eric and Yvonne deliver the lyrics, against a  stripped down groove, this proves effective. Their hurt, anger and frustration shines through, on  tale of  love gone wrong. It seems hell hath no fury like a man or woman scorned.

I Shot The Sheriff is very different from previous tracks. It’s a cover of a Bob Marley track. It stays true to the original, with the arrangement taking on a reggae vibe. Eric, accompanied by Yvonne Elliman’s backing vocals delivers what’s akin to a confession. Behind him, a chugging, shuffling, rhythm section, washes of Hammond organ and a piano combine with rocky guitars. They provide the perfect backdrop for Eric’s vocal, where elements of reggae and rock combine. Stylistically, it’s as if he’s determined to stay true to the original. Especially with the addition of backing vocals and Hammond organ. They add the finishing touch to what was, the most successful version of I Shot The Sheriff, which some believe, surpasses the original.

Hesitantly, and slowly, Eric begins his cover of Elmore James’ I Can’t Hold Out. Just guitar licks and hissing hi-hats combine, before the bass and washes of Hammond organ accompany Eric’s needy, hopeful vocal. Despite his vocal being stronger than on previous tracks, there’s an intimacy to Eric’s vocal. I Can’t Hold Out seems made to measure for Eric Clapton. It brings out the best in him, and apart from I Shot The Sheriff, is the best cover on 461 Ocean Boulevard.

Against an understated backdrop, crystalline guitars and backing vocals accompany Eric on Please Be With Me. Again, his vocal is needy, but sometimes, becomes wistful. It’s both effective and beautiful. So, are the singalong backing vocals and the slide guitar Eric plays. They result in a beautiful needy, paean.

Eric delivers a tender vocal and gently, strums his guitar as Let It Grow unfolds. He plays dobro and sing sabout his new partner Pattie Boyd, and their love blossoming. Gradually, the drama and emotion builds. Singalong harmonies, the rhythm section, chiming guitars and washes of Hammond organ accompany Eric as he delivers what can only be described as a soul baring vocal.

For a blues lover like Eric Clapton, covering a track by Robert Johnson was a must. The problem was, which one? For 461 Ocean Boulevard, Eric chose Steady Rollin’ Man. Straight away, Eric is reborn. It’s as if he’s determined to pay a fitting homage to a blues great. He leads from the front, delivering some glorious bluesy licks. Even his vocal has a swagger. His band pickup on this. They lift their game, seamlessly combining blues and rock, to create one of 461 Ocean Boulevard’s highlights.

Mainline Florida closes 461 Ocean Boulevard. It’s as if Eric and his all-star band are determined to close  461 Ocean Boulevard on a high. Blistering, rocky guitars and a pounding, driving rhythm section join washes of Hammond organ. As the band roar out of the blocks, Eric sings call and response with his backing vocalists. His vocal isn’t as powerful, until later, when he vamps as his band kick out the jams. With gospel tinged harmonies and his band in full stride, this is a joy to behold and proves that Eric Clapton’s comeback was complete.

Mostly, critics thought that musically, Eric Clapton was none the worse for what had been a tumultuous four year period of full on hard living. He was still a far better guitar player than most of the pretenders to his crown. Time and practice would see Eric return to where he had once been, before he became addicted to heroin. However, he was still able to unleash some blistering, spellbinding licks on  461 Ocean Boulevard. Apart from few critics, who accused Eric of hiding behind his fellow guitarists, it seemed Eric was still one of the top guitarists. Nor had his vocal prowess  been affected.

Eric was still able to breath life and meaning into songs. Other times he could make them swing.  Occasionally, he delivered a swaggering vocal. Sometimes, though, Eric’s vocal seemed weak. This however, worked in his favour. It meant you were captivated by his delivery. So, it seemed Eric Clapton had survived four years of addiction to tell the tale.

That proved to be the case. These years of turmoil also inspired Eric to write Give Me Strength, where he lays bare his soul for all to see. Then there was his paean Let It Grow, which seems directed at Eric’s new partner Pattie Boyd. These two tracks were part of what’s now considered a classic album,  461 Ocean Boulevard.

If Eric Clapton remained in the throes of heroin and alcohol addiction, the commercial success and critical acclaim he enjoyed might never have happened. Thankfully, it did. However, the album that relaunched Eric Clapton’s career, was his 1974 sophomore album, 461 Ocean Boulevard, where the man they once called God becomes the comeback King. 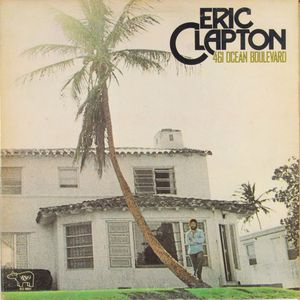