CULT CLASSIC: BETTYE CRUTCHER-LONG AS YOU LOVE ME.

Cult Classic: Bettye Crutcher-As Long As You Love Me.

For Bettye Crutcher, getting a foothold in the male-dominated world of Memphis songwriting wasn’t easy. Her songs already been rejected by Willie Mitchell at Hi Records. Willie told her he’d already got Don Bryant signed to Hi Records. Don had already established himself as a successful and prolific songwriter. Undeterred, Bettye promised herself that one day, she’d make a living as a songwriter. That was her dream. Unlike many songwriters, Bettye never really thought about being a singer.

Bettye did however, enjoy brief recording career and released Long As You Love Me in 1974. By then, Bettye Crutcher had established herself as a successful, award-winning songwriter. However, Bettye’s journey to becoming a successful songwriter was long and not without a few twists and turns.

Following the disappointment of being turned down by Hi Records, Bettye returned to her day job as a nurse. After all, she was a single parent with two children to feed. Disappointed but undeterred, Bettye realized that Hi Records weren’t the only record company in Memphis. Far from it. Hi Records were big, but Stax Records were bigger. So, Bettye headed to McLemore Avenue with her portfolio of songs.

At Stax, Bettye met David Porter He’d already established a reputation as a succesful songwriter. With Isaac Hayes, David was enjoying the hottest streak of his career. David listened to Bettye’s songs, but felt that although they were good, they were just lacking slightly. Bettye realizing she needed to up her game, headed home and got to work. Just a few days later, she’d written her first hit. This was Who’s Been Sleeping In My Bed, which gave Johnny Taylor a million-selling single later in 1967. Despite this, other songwriters at Stax weren’t exactly rushing to write songs with Bettye.

Quickly, Bettye discovered that songwriting at Stax was very much a male-dominated environment. Granted Carla Thomas and Deanie Parker had written songs, but mostly, it was something of a “boys club.” It was also difficult for an outsider to make inroads at Stax. Songwriting partnerships had already been formed. Then there was the fact that some producers were also songwriters. They wanted their songs on an album. It wasn’t as if they were going to give a newcomer a break. Unable to make inroads at Stax, Bettye continued to work as a nurse. She’d then head home, spend time with her family and later, head to McLemore Avenue, Stax’s headquarters. Gradually, Bettye’s persistence started to pay off.

Eventually, some of Stax’s songwriters realised Bettye wasn’t just persistent, but was a really talented songwriter. In 1968, she cowrote Cold Feet for Albert King with Al Jackson Jr. Betty penned The Ghetto for The Staple Singers with Bonnie Bramlett and Homer Banks. This wouldn’t be the last time Bettye worked with Homer Banks.

The We Three songwriting partnership hit the ground running. Having written just three songs, they hit the jackpot with Who’s Making Love. It gave Johnny Taylor a two-million selling single. That was just the start. We Three wrote Carla Thomas’ I Like What You’re Doing To Me, Chuck Brooks’ Love’s Gonna Tear Your Playhouse Down, The Staple Singers’ We’ll Get over and Booker T. and The MGs Slum Baby. For three years, between 1968 and 1971, We Three were one of Stax’s top songwriting teams. Then in 1971, Bettye stopped writing with Homer Banks and Raymond Jackson. She decided to work with different songwriters.

After Bettye’s departure from We Three, Homer and Raymond recruited Carl Hampton. This looked like a masterstroke, after they penned (If Loving You Is Wrong) I Don’t Want To Be Right. Then tragedy struck. Raymond Jackson died in a fire in 1972. By then, Bettye was working with Mack Rice, Marvell Thomas and Bobby Manuel, who was one of Stax’s studio engineers. William Bell, The Staple Singers and The Soul Children were all beneficiaries of Bettye’s songwriting skills. So were artists who weren’t signed to Stax.

This included Quiet Elegance, one of Hi Records’ groups. The B-Side to their 1972 single I Need Love, was Mama Said, penned by Bettye and Bobby Manuel. At last, Bettye had a song released on Hi Records, who turned her down five years earlier. Then in 1974, Bettye and Lester Snell penned From His Woman To You, for Barbara Mason. This was the reply to Shirley Brown’s Woman To Woman. Bettye and Lester also cowrote the B-side When You Wake Up In Georgia, and co-produced the track. That wasn’t the end of Bettye’s work with Barbara Mason. She and Barbara penned His Woman To You, which featured on Barbara Mason’s 1975 album Loves The Thing. By the time Loves The Thing was released, Bettye was also a recording artist. She’d released her debut album As Long As You Love Me.

Ever since Bettye had left the We Three songwriting partnership, she’d written extensively with Mack Rice. For As Long As You Love Me, Bettye and Mack penned As Long As You Love Me, A Little Bit More Won’t Hurt, Sunday Morning’s Gonna Find Us in Love, Up For A Let Down and So Lonely Without You. Mack, Bettye and Arris Wheaton cowrote Passion and Sugar Daddy, while Bettye, David Porter and Ronnie Williams penned Call Me When All Else Fails. Bettye wrote When We’re Together and Sleepy People. These tracks, which became As Long As You Love Me were recorded at the Stax and Muscle Shoals Sound Studios.

By late 1973 and early 1974, when As Long As You Love Me was recorded, the practice was for the rhythm tracks to be laid down in Muscle Shoals Sound Studios by the Muscle Shoals Sound Rhythm Section. Strings and horns came courtesy of The Memphis Symphony Orchestra. Bettye laid her vocals down at Stax’s McLemore Avenue studios. Ten tracks were recorded, with Mack Rice and Bettye producing what became As Long As You Love Me.

Bristling with bravado, emotion, sadness, sensuality and sexual electricity As Long As You Love Me features ten tales of love, lust, deceit and heartbreak. Love gone wrong and love lost. Ten tales of loving the wrong and sometimes, right men. Men who cheat, lie and leave her hurt and heartbroken. These are mini soap operas, lasting three minutes long. Powerful paeans to love and relationships, this is music for those who’ve had been hurt and had their heartbroken. Each of the ten tracks were written by Bettye, whose vocals are variously heartfelt, heartbroken, sassy, coquettish and flirtatious. Accompanied by swathes of strings, horns and harmonies accompanied Bettye breathes life, meaning and emotion into the lyrics, lyrics which she wrote. Bettye cowrote eight tracks and wrote two others. These ten tracks should’ve been the start of Bettye’s solo career. Sadly, that wasn’t to be. Her career was over before it had even began.

Released in 1974, As Long As You Love Me, Bettye Crutcher’s debut album proved to be her only album. There was no followup. Certainly not on Stax. A year later, Stax Records was declared insolvent. Bettye worked at Stax as a writer until the doors closed. She continued to work throughout the seventies, but slowed down, when she realized she could live off her royalties.

Now forty-five years after As Long As You Love Me’s release Bettye Crutcher’s oft-overlooked debut album which is a cult classic is belatedly receiving the recognition it so richly deserves.

Cult Classic: Bettye Crutcher-As Long As You Love Me. 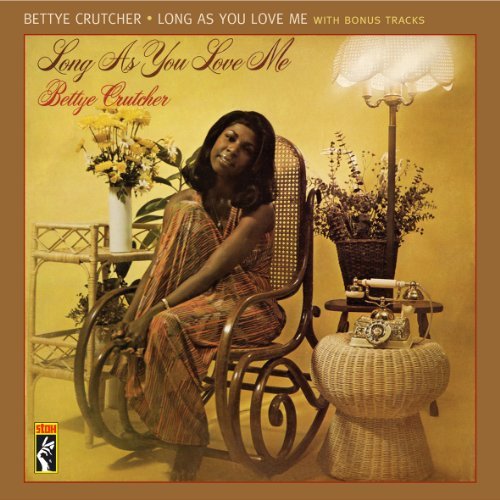