Originally, Cesar Ascarrunz came from Bolivia to California to study economics and psychology. He wanted to continue his education and the University of California, in Berkeley seemed the perfect place. When he arrived in California in 1960, he was twenty-five. Although interested in music, he couldn’t play an instrument. This changed in 1961, when Cesar was at a student party and nobody could play the piano. So, he sat down and with one finger, played Besame Mucho. That was it, Cesar was hooked. Music became Caesar’s first love.

Within a week, Cesar Ascarrunz had picked up another nine songs. Soon, he became more proficient and by October 1961, was playing professionally. Cesar was soon winning over audiences in local venues, and before long, Chad taught himself to play everything from vibes, organ, guitar and Latin percussion instruments including timbales and congas. In the space of just a few months, he became a multi-instrumentalist. Usually, this takes most people a lifetime. Not Cesar Ascarrunz who managed this whilst studying economics and clinical psychology and quickly became a musical phenomenon.

Around the San Francisco bay area, Cesar Ascarrunz was one of the most popular musicians. Music lovers flocked to his own room, Cesar’s Latin Club. If strangers arrived there, they couldn’t believe the scenes. Literally, the room was packed. Describing it as standing room only is almost an exaggeration. People were packed in cheek by jowl. Then when Cesar Ascarrunz took the stage he unleashed a glorious melange of Latin music. The rhythm section and percussion drove the audience into a frenzy. Soon, the word was out. For discerning lovers of Latin music, the place to be was  Cesar’s Latin Club.

People came from far and wide to  Cesar’s Latin Club. This included Mexico and Europe. That’s how far word had spread about Cesar. That’s no surprise though. Not only was Cesar a musical phenomenon, but a budding entrepreneur.

His time spent at the University Of California was well spent. Caesar realised the importance of raising his profile. Soon, he had a radio and television show. For him and his new band, this allowed people out-with California to hear about Cesar. This included the owner of one of the most innovative labels, Bob Thiele.

Bob had spent his like working in the music industry. He’d spent eight years transforming Impulse Records into a musical powerhouse. It gained a reputation for releasing groundbreaking music. During that time, Bob Thiele enjoyed the busiest period of his career. Bob, he was hardly away from the studio, producing over 150 albums in eight years. This included John Coltrane’s seminal album A Love Supreme.  During his time working with some of the most innovative and creative musicians in the history of jazz, Bob Thiele must have realised that often, large record companies aren’t the best environment for innovative and creative musicians. Often, these musical mavericks didn’t thrive within such an orthodox environment. Their creativity is restricted, meaning they’re unable to experiment and innovate like they would like.

Soon, Bob Thiele, would be able to create an environment where this would be possible. By 1969, Bob had been at Impulse for eight years. He’d been responsible for producing some of the most important jazz music of the sixties. However, there’s no sentiment in music. In the musical equivalent of a musical coup d’tat, Bob Thiele was ousted from his role at Impulse. This proved to the start of the next chapter in his career.

Leaving Impulse in 1969, Bob Thiele founded Flying Dutchman Productions. This would become home to everyone from Ornette Coleman, through Gil Scott Heron, Leon Thomas, Eddie “Cleanhead” Vinson and Louis Armstrong. Another artist signed to Flying Dutchman was Lonnie Liston Smith and His Cosmic Echoes. They’d just enjoyed commercial success with their 1975 album Expansions. This vindicated Bob’s belief that within the right environment,  innovative musicians could thrive, creating music that’s influential and forward-thinking. Bob Thiele’s label was on a roll, so they signed Cesar Ascarrunz’s band Cesar 830 to Flying Dutchman.

Given how successful Cesar 830 were, with their live shows, plus their television and radio shows, many people thought that their debut album Caesar would be a commercial success. On its release in 1975, it failed to chart. Caesar didn’t enjoy the commercial success other albums of Latin music enjoyed. Sadly, it proved to be the only album Cesar 830 released.

Opens Cesar is Descarga, which means an expression of the soul. It’s a joyous track that literally, bursts into life. With the piano, rhythm section, growling horns and a myriad of percussion, the arrangement is driven along. It sashays joyously along, with Cesar 830 in the tightest of grooves. A vocal escapes from the arrangement before trombone solo sores above the arrangement. It’s enveloped by percussion and sets the bar high. When it’s time for the next solo, it has a lot to live up t0. That’s no problem. The saxophone does. So does a searing, psychedelic guitar solo. Not only does it provide the icing on the cake, but the cherry too. Quite simply, this is an irresistible and joyous irresistible fusion of Latin jazz, funk and even a twist of rocky guitars.

Straight away, See Saw Affair, the best known track from Caesar, reminds me of Santana in their prime. It’s the crystalline, glistening rock-tinged guitars that lead to this comparison. They’re accompanied by a funky rhythm section and percussion as Latin jazz, salsa, rock and two step soul combine. The soul comes courtesy of Linda Tillery’s heartfelt and sensual vocal. She struts her way through the track, adding whoops and hollers, while braying horns and drums add to the drama.That’s why this has track has long been a favourite of clubbers. No wonder. Soulful, jazz-tinged and dance-floor friendly describes this track.

The Devil and Montezuma is a dramatic, cinematic track. It’s reminiscent of the type of track that would feature on a Blaxploitation soundtrack. Rolls of drums, a blistering saxophone solo, reverberating guitars and percussion unite. Thunderous rhythms are the order of the day. Stabs of grizzled horns compete with the alto-saxophone and guitars. In the midst of the mix Cesar’s piano competes for your attention. Mostly, it’s the blazing, blistering horns that take centre-stage. Everything else plays a supporting role on this dramatic, cinematic opus. It’s a track that would be perfect for the dramatic scenes in the next Tarantino movie.

Navidad Latino you think, is a much more laid-back affair. With a wistful sound that meanders into being, Cesar 830 throw a curveball. Horns blaze, while the rhythm section, piano and percussion drive the arrangement along. It unfolds in waves, revealing its secrets and beauty. A horn rasps and floats above the arrangement, which sashays along, sweeping you in its wake. While not as dramatic as other tracks it has one thing in common, it’s quality.

Azucar is a cover of Louie Ramirez track. It featured on Louis and Pete Bonet’s 1971 album Pete and Louie. It’s an explosive fusion of musical genres. Dramatically bursting into life, thunderous drums join percussion and Santana-esque guitars. Bursts of braying horns add to the drama as everything from funk, jazz, Latin and rock combines. Later, harmonies usher in Linda’s sassy vocal. She sings call and response, before Cesar 830 kick loose. In full flow, it’s an impressive sound. For the fifth time, I’m left asking myself one question, why wasn’t Caesar a hugely successful album? After all it’s shaping up to be a lost classic?

Gotta Get Away sees Cesar transformed into big band. They unleash a storming slice of Latin jazz. Oozing drama from the opening bars, it’s as if vocalist Linda Tillery is making her escape. There’s an urgency in her vocal. The rest of Cesar 830 pickup on this. Blistering guitar solos, a funky bass, braying, blazing horns and a myriad of percussion provide the dramatic backdrop as Linda sings she’s “Gotta Get Away.”

After the drama and urgency of Gotta Get Away, Bridges sees a change in style. For the moment, the drama and urgency dissipates. The arrangement is driven along by a melancholy saxophone which takes centre-stage. Everyone else plays a supporting role.This includes revving guitars, percussion, keyboards and the rhythm section the drives the arrangement along. The drama, urgency and power of earlier tracks returns. This allows Cesar 830 to showcase their talent and versatility, as they create a delicious fusion of funk, jazz and Latin music.

The Lady In My Life closes Caesar. It was written by Eddie Palmieri. Stabs of horns and bursts of drums announce the arrival of Cesar 830 for the last time. The arrangement sashays along, percussion, piano and vocal uniting. The vocal carries the melody, while drums add occasional bursts of drama. Horns add a sultry Latin sound. Then with two minutes to go, Cesar 830 decide to kick loose. Blistering rocky guitars, galloping percussion and bongos join the rhythm section combine. Having stretched their legs, the track returns to its earlier sound. The arrangement sashays its way to a joyous and dreamy close, bookending the Caesar perfectly.

Earlier, I said that throughout Cesar, I’d wondered why the album wasn’t a huge commercial success? After all, there’s not a poor track on the album. From the open ing bars of Descarga, right through to The Lady In My Life, Cesar oozes quality. It’s an album that’s all killer no filler. Despite this, Cesar was a commercial failure. That  was the end of Cesar 830’s recording career. Abruptly, it came a halt. Since then, Cesar has lain unreleased and unloved. That’s apart from a discerning group of music lovers. They recognised the importance of Caesar and the music released by Flying Dutchman.

Bob Thiele was a musical maverick and visionary.  Often, these musical innovators didn’t thrive within such an orthodox environment. Their creativity is restricted. This means they’re unable to experiment and innovate like they’d like. So Bob Thiele was determined to give innovative and creative musicians an environment where they could thrive. The result was Flying Dutchman.

By 1975, his label was six years old and had just enjoyed commercial success with Liston Smith and His Cosmic Echoes’ 1975 album Expansions. Buoyed by this success, Bob realised that Latin music was enjoying a resurgence in popularity. With Cesar 830 a successful act around San Francisco, and thanks to television and radio shows, further afield signing them seemed a no-brainer.

Sadly, despite providing Cesar 830 the environment and freedom to create groundbreaking music their 1975 debut album wasn’t a commercial success. That’s despite Caesar being a delicious and irresistible fusion of funk, jazz, Latin, psychedelia, rock samba and soul. Dance-floor friendly, jazz-tinged and soulful, Cesar 830 were one of the top Latin bands. However, still commercial success and critical acclaim eluded them. Why?

Maybe the problem was, that Flying Dutchman wasn’t a big enough label for Cesar 830? They were popular throughout Europe and South America. Possibly, Flying Dutchman weren’t big enough to promote them throughout three continents, North America, South America and Europe? A major label would’ve been able to do this. Sadly, major labels weren’t the right place for artists to experiment and innovate. Majors wanted success and wanted it quickly. Smaller labels like Flying Dutchman nurtured artists like Cesar 830 before they released an album.

Sadly, despite this nurturing  Cesar 830’s only album for Flying Dutchman Caesar wasn’t a commercial success. Instead, Cesar was a victim of circumstances and is best described as a lost Latin classic. 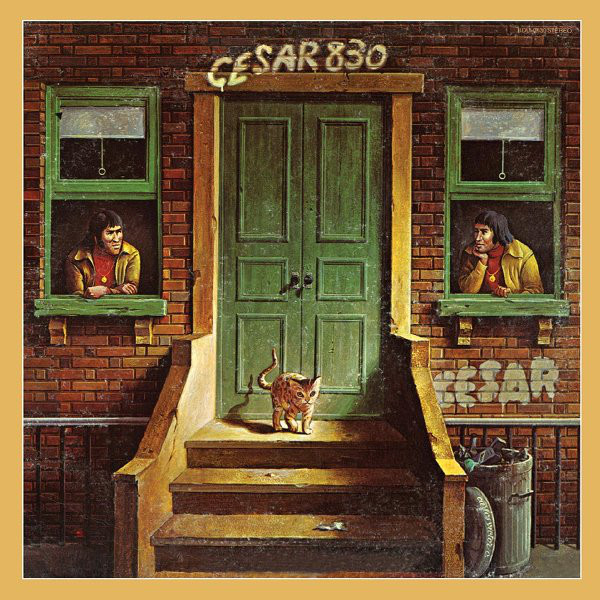