Many people who love music dream of owning and running their own record company. However, not everyone who decides to found a record company is qualified or suited to do so. They don’t have the skillset or experience that’s required and instead of it becoming a profitable venture it ends up a chaotic vanity project that’s destined to end in disaster. By then, they’ve wasted a huge amount of money.

All they’ve got to show for it, are rooms filled with boxes of unsold albums by the has-beens they signed and gave large advances to. The albums that they recorded failed to sell and couldn’t even be given away. Now they’re destined for the landfill and to rub salt into the wound they need to pay to dispose of the albums. It’s been an expensive mistake and one they’ll regret for the rest of their life. Their dream of running a record label was over.

This is a familiar story as many people have dreamt of running their own record label. However, some manage to make a success of it.

During the sixties and seventies, many record company sprung up across America. This included Black Fire Records which was founded in 1975 Jimmy Gray. He was  a jazz DJ who also ran a music magazine called Black Fire. Music was Jimmy Gray’s passion and had been part  of his life from an early age.

He was born in Washington DC in 1937, and growing up, music was all around him. Jimmy Gray’s aunts ran jazz clubs on U Street, and by the time he went to high school he was already a huge music fan. This wasn’t just a passing fad, it would prove to be a lifelong passion.

After leaving high school, Jimmy Gray joined the US Navy. However, he soon realised that this wasn’t what he wanted to do with his life and instead, got a job as a DJ.

Jimmy Gray was lucky as there was a vacancy at WHUR-FM, which was Howard University’s citywide radio station. The new DJ dawned the moniker Black Fire and began playing contemporary jazz. Quickly he developed his own style preferring to let the music do the talking. It was as if he was reluctant to interrupt the music which he knew was what the listeners wanted to hear. When he did speak, often Black Fire’s voice was drenched in reverb which added an air of mystery. Soon, he became an iconic figure within Washington DC’s music scene.

It wasn’t long before he was doing promo work for various jazz labels. This included one of the major labels Verve, and artist run indies like Strata East, Tribe and Black Jazz. These smaller labels allowed innovative musicians to thrive and receive a fair share of the profits their albums made. This was something that interested Jimmy Gray.

By 1973, he was running his own music magazine Black Fire. When J. Plunky Branch a.k.a. Plunky Nkabinde of Juju saw the magazine he realised that the album cover for A Message From Mozambique was being used on the cover. This angered him and his first thought was to sue Jimmy Gray. However, he soon had a change o heart.

This came about when he spoke to the musicians running the Strata-East label which he was signed to. They explained that Jimmy Gray was a friend and an influential figure within the music industry. All was soon forgotten and J. Plunky Branch and Jimmy Gray became friends.

In 1974, Juju released their sophomore album Chapter Two: Nia on Strata-East. One of its highlights was Nia (Poem: Complete The Circle) which is included on Soul Love Now: The Black Fire Records Story, 1975-1993. It’s a dramatic, driving song recorded in 6/8 time that combines African music, funk, fusion and free jazz with poetry. The result is a powerful track that is a welcome addition to the compilation and reminder of Juju before they changed direction musically.

Meanwhile, J. Plunky Branch and Jimmy Gray were interested and inspired by Strata-East’s business model, and liked how the label gave most of the profit to the artist or band and allowed them to keep their publishing rights. Most of the releases weren’t particularly successful apart from Gil Scott-Heron and Brian Jackson’s Winter In America. Even though this resulted brought about a much-needed injection of capital the  label was teetering on the brink and collapsed into insolvency.

After the demise of Strata-East, J. Plunky Branch’s band Juju was without a label. He and Jimmy Gray wondered if they could create a business model that combined artistic freedom that artists enjoyed at Strata-East?

The future business partners proposed that artists would the artist and label would enjoy a 50-50 split of net profits from album sales. They would also enjoy the complete artistic freedom that artists and bands at Strata-East enjoyed. This was the basis for Jimmy Gray and J. Plunky Branch’s new label Black Fire Records.

Meanwhile, J. Plunky Branch’s band Juju had moved away from their old free jazz sound and had adopted a new, funkier sound that was regarded as much more accessible and hopefully, radio friendly. The band was the new label’s first signing and entered the studio to record an album.

This became African Rhythms which was released later in 1975. Although the album didn’t sell in vast quantities it sold well in the Washington DC area and forty-five years later, is regarded as a cult classic. A live version of African Rhythms features on Soul Love Now: The Black Fire Records Story, 1975-1993 and finds Oneness Of Juju vamping their way through this melting pot of funk, jazz and soul which is now their best known track.

Oneness Of Juju’s other contribution is Soul Love Now from their 1976 album Space Jungle Luv. It’s delivered in a call and response style and  they kick loose midway through the track as a muscular bass, backing vocalists, vibes and Fender Rhodes play their part in this anthemic track where they combine funk, jazz and soul.

Another album released in 1976 was Wayne Davis’ eponymous sophomore album. This was the followup to A View From Another Place which was released on Atlantic in 1973. Jimmy Gray had pulled of something of a coup by signing him to Black Fire Records. When he entered the studio Wayne Davis was accompanied by poet and flautist Wanda Robinson and the horn section from go-go pioneers Experience Unlimited People. They played their part in what’s a vastly underrated album of soul and gospel. One of its highlights is Look At The People 1976 which features an impassioned, powerful and emotive vocal. There’s a sense of urgency as Wayne Davis who is accompanied by backing vocalists combines soul and gospel on what’s one of the compilation’s highlights.

By 1977, Experience Unlimited’s star was in the ascendancy. They had already been crowned Best Rock Group at a talent competition at the Duke Ellington School Of The Arts in Washington DC and were playing alongside some of the city’s bigger band at established venues. Jimmy Gray recognised the band’s potential and took them into the studio to record their debut album Free Yourself. They were joined Wayne Davis who agreed to add the vocals. During the session the band recorded the future proto go-go classic Free Yourself. However, it’s the beautiful ballad People that features lyrics full of social consciousness that shows another side to this talented and versatile group.

Jimmy Gray continued to sign bands up until 1978. He took them into the studio and recorded albums which he planned to release. However, rising costs of manufacturing and promotion meant he was unable to do so. This was a huge disappointment for everyone involved and the albums weren’t released until the early nineties.

This includes Philly-born flautist and saxophonist Byard Lancaster whose album My Pure Joy which was belatedly released in 1992. He was a graduate of the Berklee Of Music and one of the leading lights of the Second Wave of free jazz. When Byard Lancaster recorded My Pure Joy he was joined by Drummers From Ibadan who were led by bassist Tunde Kuboye. This result is an atmospheric, mesmeric and cinematic collaboration that paints pictures and takes the listener on a journey.

Lon Moshe and Southern Freedom Arkestra’s album Love Is Where The Spirit Lies which was recorded on June the ‘3rd’ 1976 and September the ’14th’ 1977 at Arrest Recording Studio, in Washington DC. One of the tracks recorded in 1977 was Doin The Carvin For Thabo which a breathtaking and intense example of spiritual jazz that is one of the compilation’s highlights.

When master drummer Okyerema Asante arrived in America he was part of Hugh Masekela’s backing band Hedzolleh Sounds. He played on several albums recorded in America between 1973 and 1975. However, when the band returned to Ghana their drummer decided to stay longer. He then became a member of Oneness Of Juju and Southern Energy Ensemble. However, he recorded his solo album Drum Message on the ‘27th’ of October 1977 and Follow Me features a drum masterclass from the legendary Ghanian drum master.

Southern Energy Ensemble were formed by Marvin Daniels in Richmond, Virginia in 1977. The new group and featured some of the city’s top musicians and were about to record an album for Black Fire Records. That album was Southern Energy which was eventually released in 1993 and features Third House a driving and dramatic  instrumental that combines jazz-funk and fusion.

Theatre West was a musical and theatre troupe from Drayton, Ohio, who signed to Black Fire Records and in 1978, recorded their only album Bow To The People which was eventually released in 1993. It was based on the 1971 play The System and features  Children Of Tomorrow’s Dreams which is a beautiful, heartfelt message of hope. It’s one of the highlights of the Soul Love Now: The Black Fire Records Story, 1975-1993 compilation.

Many people have waited a long time for a Black Fire Records compilation to be released. Strut Records got their first with Soul Love Now: The Black Fire Records Story, 1975-1993. It’s best described as the musical equivalent of an amuse-bouche. The ten tracks are a tantalising taste of a label that always released music that was ambitious, groundbreaking and innovative.

It’s just a pity that Soul Love Now: The Black Fire Records Story, 1975-1993 isn’t a two or three CD set. Then there would’ve been room for two or three tracks from each artist and band. The only band to feature more than once is Juju who became Oneness Of Juju. They feature three times. However, the compilers will argue that their recently their music has started to belatedly find a wider audience.

Sadly, just like so many small label the albums that Black Fire Records released weren’t a commercial success when they were released. Some sold reasonably well in Washington DC where the label was based. However, the lack of success was down to the age-old problems that many small record labels face lack of finance and the lack of expertise when it came to PR. Unlike major labels like Black Fire Records didn’t have a team of PR professionals with a large budget to promote their albums. However, Jimmy Gray didn’t lack enthusiasm and believed in the music that his label was releasing.

Somewhat belatedly it’s starting to find a wider audience and the albums are being reissued and the compilation Soul Love Now: The Black Fire Records Story, 1975-1993 has just been released and is the perfect primer to Jimmy Gray’s groundbreaking label. 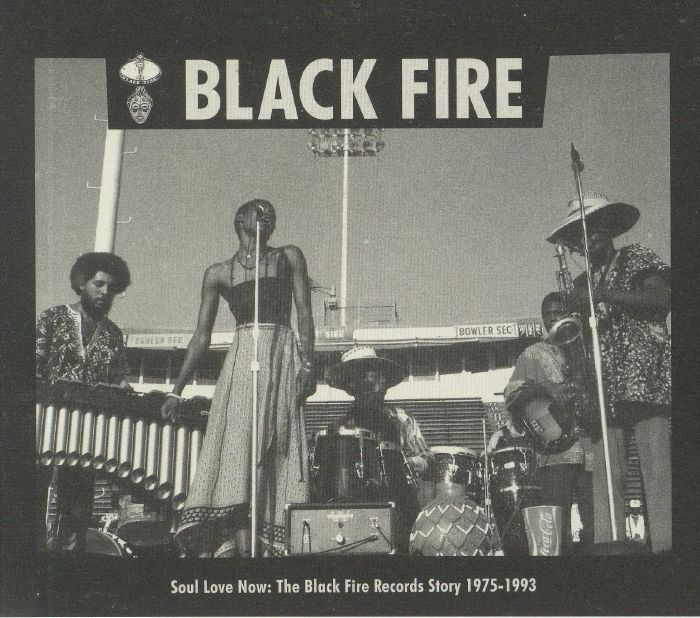