Ever since the birth of rock ’n’ roll, youth cults have come and gone. Some have proven to be nothing more than passing fads that nowadays, are mere footnotes in cultural history. Some youth cults have endured, and played an important part in British culture. However, none of the youth cults of the past sixty years have enjoyed the same longevity as the modernists.

The modernists came to prominence in the late fifties, and their name came about because of their love of modern jazz. However, by the early sixties, things were starting to change and the modernists had become the mods.

Musically, mods had eclectic taste in music and embraced American R&B and soul music. Especially singles that were released on Stax, Atlantic Records and Tamla Motown.This led to the mods investigating some of the smaller American labels during their frequent trips to local record shops.That was where the mods ordered imports, and discovered new musical genres.

This soon included ska and reggae, which they discovered whilst looking through the racks of new arrivals and imports. While  the mods enjoyed soul, R&B, reggae and ska, they didn’t turn their back on British music. The mods also enjoyed pop and rock music, and especially groups like The Rolling Stones, The Who, Small Faces and The Kinks, who were perceived as “mod” groups. That is still the case even today. However, music was only part of the mod movement.

Image was everything for the mods. They carefully tried to cultivate an air of coolness. The suits they wore were often tailor-made.  Sometimes, their suits were made out of cashmere, with narrow lapels. They also sported button-down collar shirts, thin ties and wool or cashmere jumpers. All this was de rigueur for a mod around town. So too, were fishtail parkas, desert boots, Chelsea boots and bowling shoes. A few mods even took to wearing makeup. In sixties Britain, this didn’t go unnoticed. However, the mods were unlike no other youth subculture, and even had their own mode of transport.

The Lambretta or Vespa scooters were the mods’ choice of transport. They drove them around town, where they visited dance-halls, coffee bars,  and cinemas. At cinemas, mods took to watching French and Italian films. This was all part of a sense of continental coolness they were attempting to cultivate. After all, image was everything to the mod. So was music and the two go hand-in-hand.

Every time there has been a mod revival in the last fifty years, at the heart of the revival has been the music. Whether it was in the late-seventies or mid-nineties, music and fashion was at the heart of these mod revivals. The music being made during the mod revivals during the late-seventies and mid-nineties, was inspired by the music of the sixties. For mods of all vintage, this was a golden era for music. It still is.

That’s why Kent Dance’s mod compilations have proved so popular. This includes the third instalment the series Modernity, which will be released by Kent Dance on the ‘28th’ of May 2021. It features twenty-four tracks and is sure to prove popular amongst mods young and old.

Opening Modernity is Just Can’t Help Myself by Birdlegs and Pauline. It was first released as a download by Numero in 2018 and is a raw slice of uptempo, gospel-tinged soul that was recorded for the Cuca label which became insolvent. That was why the song lay unreleased for so long and it returns for a well deserved encore on the compilation.

Eddie Bo was a versatile singer who recorded for over forty labels over a career that spanned over fifty years. In 1963, he released I Found A Little Girl as a single on the At Last label. His joyous, sassy and vampish vocal is accompanied by a driving rhythm and horns on what’s one of the hidden soulful gems in his back-catalogue.

Despite enjoying a degree of longevity,The Merced Blue Notes didn’t enjoy a prolific recording career. Their back-catalogue amounts to a handful of singles and one album, Music With A Beat That Won’t Stop. It was released in 1984, and featured fourteen previously unreleased songs recorded between 1960 and 1963. These songs were from the private collection of The Merced Blue Notes’ manager George Coolures. He had the album pressed as a limited edition on blue vinyl. It’s an incredibly rare album that features Sundown, which was written George Coolures and Ken Craig. When Sundown was played by DJs in the early sixties, this hidden R&B gem was guaranteed to fill a dance-floor. Even after one play, you’ll realise why.

There’s five unreleased tracks on Modernity. This includes Sticks Herman’s Is It Because You Love Me  which he recorded for Tic Tac in 1961. This R&B stroller features an impassioned vocal that’s full of emotion and is a quite beautiful track.

By 1964, the hits had dried up for Ike and Tina Turner who had signed to the Buck Ram label. They had released A Fool For A Fool as a single and it failed to trouble the charts. Other recordings lay urn unreleased tracks including Walk Home With Me which was recorded in 1964 and sounds as if it’s taken from a Broadway show. This catchy track features a memorable vocal from Tina Turner who plays a starring role.

Earthquake was written by William Powell and recorded by The Fashionettes for the Garpax label in 1963. Sadly, the song lay in their vaults until 2009 when it made its debut on Ace Records’ Where The Girls Are Volume 7. Twelve years later and it returns for an encore. This oft-overlooked earworm is a reminder of another musical era and Gary S. Paxton’s skills as a producer.

Eddie Kirk recorded two singles for the Stax imprint Volt during the sixties. One was The Hawg which was released in May 1963. On the B-Side was The Hawg (Part 2). However, the version on the Modernity is an unedited version which featured on 4000 Volts Of Stax and Satellite. It’s raucous, rousing and has an uber funky groove. Despite that, the single failed to find the audience it deserved and wasn’t even distributed across America.

In 1965, Charles Hodges released My Half A Heart as a single on the Alto label. Those who flipped over to the B-Side were in for a pleasant surprise when they hear his cover George and Ira Gershwin’s (Oh) Lady Be Good. It’s totally transformed and becomes an irresistible slice of uptempo soul that’s guaranteed to fill a dancefloor.

By 1963, Chuck Jackson was signed to Wand and released Tell Him I’m Not Home as a single. On the B-Side was Lonely Am I which is essentially new lyrics added to Cannonball Adderley’s jazz hit This Here. It’s a typical New York production that showcases a talented singer as delivers a needy, pleading and impassioned vocal on this hidden gem.

Willie Tee originally recorded Who Knows for the AFO label in 1963. It lay unreleased until 1994 when it made its belated debut on Still Spicy Gumbo Stew (Original AFO New Orleans R&B).  It features a questioning vocal that’s full of emotion and insecurity. This is accompanied by an arrangement that’s got made in New Orleans written all over it.

The name Bernard Jolivette probably won’t mean much to most mods. That’s unless they’re the type to pore over the credits on singles. If they are, they’ll know that he was a successful songwriter who lived in Louisiana and wrote a number of hit singles. He also influenced the chord structure of the swamp pop ballad. Away from writing songs, Bernard Jolivette released a string of singles as King Carl. Unfortunately, commercial success eluded these singles. One track that’s lay unreleased since 1964 it was recorded for La Louisiana label is That’s All I Want. It’s an uptempo dancer where horns play a leading and accompany the vocal on a track form one of Louisiana music’s best secrets.

Looking Through My Spyglass by Rockin’ Sidney closes Modernity. It was written by Sidney Simlen and was recorded for the Goldband label in 1967 and was scheduled to be the B-Side of the Southern Soul ballad Trust.  Sadly, this glorious R&B dancer lay unreleased and makes a belated debut on the compilation, closing it in style.

For many an ageing mod, the music on Modernity is sure to bring back many a happy memory. Some of the original mods will be well into their seventies. It’s a long time since they were a mod about town in the sixties. Back then, they would dawn their cashmere suits, complete with narrow lapels. Completing the look were button-down collar shirts, thin ties and a wool or cashmere jumpers and Chelsea boots. This was all part of their carefully cultivated image that they wore about town.

To get into town, the original mods would head out to their Vespa or Lambretta. Many of the most fastidious of mods would even dawn a fishtail park. This wasn’t so much a fashion statement, as a means of protecting their precious tailor-made suit. The mods would head climb abroad their Vespa or Lambretta and head into town. Usually, many mods would travel together, their reasoning being, safety in numbers. Often, there would be clashes with their arch enemies, the rockers. Mostly though, the mod about town would arrive at their local coffee bar, pub and club. That was when the music would start to play and the twenty-four tracks on Modernity will bring back memories of their glory days.

Much of that music is timeless. Proof of that is the music on Modernity. It’s a tantalising reminder of a time when mohair suits, button down shirts, fishtail parkas and a Vespa was de rigueur for the mod about town.

It’s also a reminder of one of the most important British youth cults, who have enjoyed an unrivalled longevity. Nearly sixty years since the birth of modernism, the music is just as popular as ever. Maybe compilations like Modernity will spark a third mod revival and mohair suits,  fishtail parkas Vespa scooters will be de rigueur again? 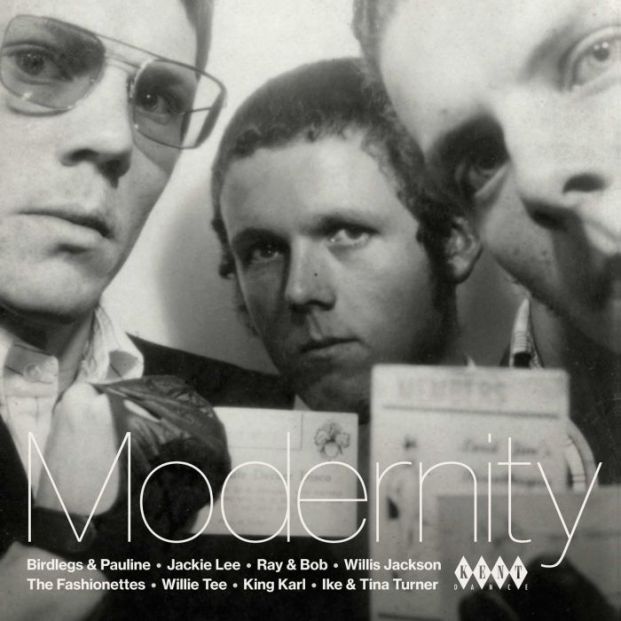