2008. That’s when Yesking released their debut album Rock This World, which was produced by Yesking head honcho Rhys Adams and Mark Rae, of Rae and Christian. Now five years later, on March 18th 2013, Yesking will release their sophomore album Re-Record Not Fade Away on BBE Music. For Yesking’s legion of fans, that means the wait is nearly over. At Last, as Etta James sang, Yesking’s fans have something to look forward to. To tide any impatient or restless Yesking fans over, during the next two months, comes Overproof, the lead single from Re-Record Not Fade Away. Overproof, you’ll realize when I tell you about it, isn’t just any single. Not all all. Instead, Overproof is a luxurious eight track digital download, which should keep Yesking fans everywhere occupied for the next two months.

Since we last heard from Yesking, they, like music, and the music industry, have undergone a number of changes. Musical fashions seem to change even quicker than before, with new musical genres becoming flavor of the month. Then just as quickly as a new musical genre blossoms, something new comes along to surpass it. For record companies, never before have they faced such challenging times. The way people are consuming and buying music has changed.

Long gone are the days when singles were released on vinyl and sold through record shops. When I first bought singles, they were the old seven inch singles. The twelve inch single had yet to be invented. From there came the invention of the compact disc, which like the twelve inch single, people at the time wondered whether “it would catch on?” To many cynics, both the twelve inch single and compact disc were “fads,” doomed to go the way of betamax video recorders. Eventually, singles were released on compact disc. Then, with the advent of the digital download, the physical sales of singles gradually died a slow and painful death. Much loved and much mourned, the birth of MP3 and MP4s, meant the way people buy, consume and listen to music has changed. Now in 2013, downloads outsell compact discs. For labels like BBE Music, and groups like Yesking, they’ve had to adapt, react to the changes in how people buy, consume and listen to music. An example of this is Yesking’s single Overproof, which will be released on BBE Music.

When singles were released on vinyl, usually their were only two tracks. For an E.P. four tracks were squeezed in. Now with the digital download, there’s no restrictions on the number of tracks on a single package. Overproof, the lead single from Yesking’s sophomore album Re-Record Not Fade Away is a good example of this. In total, there are eight different versions of Overproof in this digital release. There’s the original version of Overproof, an instrumental version, a radio edit and three remixes. The remixes are from BBE Music favorites Chris Read, Sola Rosa and Joe Revell. As an added bonus, Overproof is reinvented, reinterpreted and retitled, becoming Raise Up. An acapella version also is included, which should please DJs everywhere. So that’s eight slices of Yesking to keep their fans occupied. However, what can they expect?

For Yesking fans buying Overproof, and then in March Re-Record Not Fade Away, they’re in for two pleasant surprises. The first is that Overproof feature a new lineup of Yesking. Overproof features the Yesking debut of Mel Uye-Parker’s sultry, sensuous vocal. Raise Up sees Kenny Knotts, a regular feature of the UK’s Dancehall scene add the vocal. Another difference is that, this time around, Rhys Adams produces Re-Record Not Fade Away. So Yesking’s lineup has changed and so has their sound.

Previously, Yesking fused R&B, hip hop, dancehall, ska and ragga. Much of Rock That World was recorded by Rhys Adams and Mark Rae in Ladbroke Grove, which has a rich Jamaican musical heritage. Many of Yesking’s collaborators were based in the borough. Kenny Knotts, Dawn Penn and Veba all featured on Rock That World. That was in the Mark Rae era Yesking. Now Rhys Adams takes sole charge of production duties for Yesking’s sophomore album Re-Record Not Fade Away. Rhys seems to be stamping his authority on the post Mark Rae Yesking sound, producing music which is best described as “dubbed out, reggae influenced songs” which are in similar to the style of music Massive Attack have championed. I’ll explain more when I tell you about Overproof.

From the opening bars of Overproof, you’re won over by Yesking’s new sound. It’s impossible not to be. Harmonies joyfully soar, before things get spacey and gloriously dubbed out.The tempo is slow, the rhythms transporting you far, far away. You head to Jamaica, via Labroke Grove. Spacey, dubby drums, a pounding bass and percussion meander along. Drums crack, then echo in the distance. Then Mel Uye-Parker’s sultry, heartfelt vocal enters. It’s surrounded by the fruits of Yesking’s rhythm section. They provide a pulsating heartbeat, that wanders and ambles along. An angelic, crystalline choir of backing vocalists enter, their scatted harmonies sung emotively and with sheer joy. For five minutes, you’re captivated and enthralled, by this spacey, smokey dub-delicious track, from the new Yesking.

Having enjoyed the original version of Overproof, there’s the added bonus of five other version to revel in. The instrumental version, or should that be the dub version, is just as good. You can hear the keyboards, guitar and rhythms even better. Listen carefully and you’ll hear some atmospheric, vintage Hammond organ licks, chiming guitars and glorious rhythms. Here, the drums seEm spacier and deeper. Effects are added to them, resulting in an uber dubby sound. Similarly, bass seems punchier, pounding, testing the tolerance of your speakers. Certainly the track doesn’t suffer from the loss of Mel Uy-Parker’s vocal. Quite the opposite. Subtleties and nuances reveal themselves, and a new track is born.

Of the other four versions of Overproof, each version offers something new and different to the original track. The Radio Mix sees the track shortened, coming in at just under four minutes. This results in a much more punchier track, which as the description suggests, would be “radio friendly.” The other three remixes, well they offer something different.

BBE Music regulars Chris Read and Sola Rosa are first up. Chris Read’s version of Overproof is dubbier, much more moody and atmospheric. To do this, Chris uses echo and delay, but cleverly and subtly, especially on the vocals and drums. Sola Rosa takes a different approach. This remix is quicker, brisker and more uptempo. It transforms the original track. Then it’s Joe Revell’s turn to get busy remixing Overproof. Joe Revell’s mix is different again. He totally rearranges the track from the opening pensive, wistful beats. There’s a much more understated sound to the track, building up to the joyous harmonies which in the original, were at the start. Again, Joe has transformed the original track, chopping it up, rearranging it and turning it into something that Rhys Adams probably neither imagined, nor envisaged. The beauty of this is that with each remixer approaching the original track in a different way, they’ve come up with something innovative and imaginative. While there’s no right or wrong way to remix a track, there’s only good and bad remixes. Here, Chris Read, Sola Rosa and Joe Revell prove that they’re talented and innovative remixers. As far as remixers go, well they’re three of the good guys. These three remixes demonstrate this.

There are two more tracks on the Overproof single’s package. They demonstrate just how inventive the personnel involved with this project is. Here. Overproof is reinvented and reinterpreted, becoming a totally new track, entitled Raise Up. Most of the track is the same, apart from the vocal. That’s where Kenny Knotts comes in. Kenny a regular feature of the UK’s Dancehall scene, takes charge of vocal duties. His vocal is very different from Mel Uy-Parker’s vocal. While her vocal is sultry and sensual, Kenny’s is heartfelt, has a spiritual quality and an authentic Jamaican sound. An added bonus, which will appeal to DJs is the acapella version of Raise Up.

So, five long years, after the release of Yesking’s debut album Rock This World, Yesking are back. Not only are they back, but they’re back with a new lineup and new sound. Overproof is a tantaliSing taster of what’s just around the corner. What’s around the corner is their sophomore album Re-Record Not Fade Away, which will be released on BBE Music, on 18th March 2013. From what I’ve heard listening to Overproof, then Re-Record Not Fade Away, Yesking have neither burnt out, nor faded away. Just like their debut album Rock This World, Yesking are just as innovative, brave and bold as before. Indeed, Re-Record Not Fade Away is a fitting description of Yesking and their music, as they continue to Rock This World, and at the same time, innovate bravely and boldly. 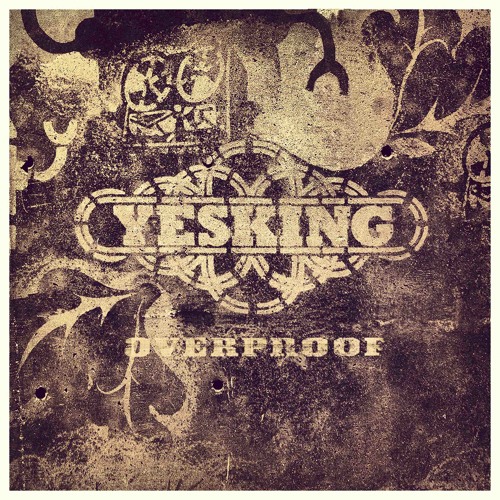