So, Lonnie dusted himself down and returned with Lonnie Liston Smith and The Cosmic Echoes 1974 sophomore album, Cosmic Funk, which was recently rereleased by BGP Records, an imprint of Ace Records. Cosmic Funk is another genre-melting album of groundbreaking music from a true jazz pioneer, Lonnie Liston Smith, who is seemed was destined to become a musician.

For Lonnie Liston Smith, it was almost written in the stars that he’d become a musicians. Lonnie was born in 1940, into a musical family. His father was a member of Richmond Gospel music group the Harmonising Four. Growing up, members of gospel groups The Soul Stirrers and Swan Silvertones were regular visitors to the Smith household. With all this music surrounding him, Lonnie learned piano, tuba and trumpet in High School and college. After college, he headed to Morgan State University.

On leaving Morgan State University, Lonnie got a job with the Royal Theatre’s house band. For a young musician, this was would help turn them into a musical all-rounder. After all, they had to be able to accompany a wide range of artists. For Lonnie, this was the next stage in his musical education. The next part of  his musical education took place in New York.

Having moved to New York, Lonnie was luck enough to get a gig playing piano in Betty Carter’s band. This helped Lonnie get his name known in the Big Apple. Then in early 1965, Lonnie caught a break. He joined Roland Kirk’s band and made his recording debut on March 14th 1965. That was when Here Comes The Whistleman was recorded live in New York Lonnie only played on the title-track, Making Love After Hours, Yesterdays and Step Right Up. Then Lonnie featured on Roland andAl Hibbler’s 1965 live album A Meeting Of The Times. After this Lonnie, joined one of jazz’s top bands.

Over the last few years, The Jazz Messengers had established a reputation for young musicians looking to make a name for themselves. Lonnie joined in 1965. He shared the role with Mick Nock and Keith Jarrett. However, with The Jazz Messengers ever evolving lineup, Lonnie only played three in concerts. These three concerts just so happened to be at the legendary Village Vanguard. For Lonnie, despite the prestigious venue, this must have been a disappointing time. Luckily, he was rehired by Roland Kirk.

Lonnie  rejoined Roland Kirk’s band in time to play on his 1968 album Now Please Don’t You Cry, Beautiful Edith. This established Lonnie’s reputation as the go-to-guy for a pianist. It was the start of period where Lonnie worked with some of the most innovative and inventive jazz players. Musical boundaries were about to be pushed to their limits as Lonnie joined Pharaoh Saunders’ legendary free jazz band.

Pharaoh Saunders had worked closely with John Coltrane right up to his death in 1967. The following year, Pharaoh formed a new band. Their music is best described as free jazz. Musical boundaries were pushed to their limits and beyond. Recognising a fellow believer in free jazz, Pharaoh asked Lonnie to join his band. Lonnie went on to play on three of Pharaoh’s best albums. The first of this trio was 1969s Karma. It was followed in 1970 with Jewels of Thought and 1971s Thembi. The other Pharaoh Saunders album Lonnie played on was 1970s Summun Bukmun Umyun. which was released on Impulse. Just like the three albums Pharaoh recorded for Flying Dutchman Productions, it was a groundbreaking album.

During this period, Pharaoh and his band were constantly pushing boundaries and rewriting the musical rulebook. Their music was truly groundbreaking. Even Lonnie was challenged. On Thembi, Pharaoh asked Lonnie to play the Fender Rhodes. This was the first time that Lonnie came across an electric piano. However, he rose to challenge and wrote Thembi’s opening track Astral Travelling. Later, Astral Travelling would become synonymous with Lonnie Liston Smith and The Echoes. Before that, Lonnie would play with some of jazz’s mavericks. One of these was Gato Barbieri. He’d just signed to Bob Thiele’s nascent label Flying Dutchman Productions. It was establishing a reputation for providing musicians with an environment where innovative and creative musicians could thrive. Bob believed musical mavericks didn’t thrive within such an orthodox environment. Their creativity is restricted, meaning they’re unable to experiment and innovate like they’d like. So, Bob signed Gato to Flying Dutchman. Lonnie played on his 1969 debut album The Third World. Bob’s next signing was Leon Thomas and played on his debut album Spirits Known and Unknown. Soon, Lonnie was a regular at Flying Dutchman sessions.

When the time came for Gato to record his 1971 sophomore album Fenix, Lonnie was called upon. He played on Fenix and joined Gato’s band. Lonnie played on Gato’s 1972 album El Pampero. He also toured throughout Europe with Gato. Then came the opportunity of a lifetime. After El Pampero, Lonnie got the chance to work with another jazz legend.

Lonnie was a member of Gato Barbieri’s band when Miles Davis got in touch. He wanted Lonnie to join his band. At this time, Miles’ music was changing direction. The direction it was heading in was funk. Electronic instruments were the flavour of the month for Miles and he was exploring their possibilities. However, Miles was doing this outside the studio environment. That’s why there are very few recordings of Lonnie playing alongside Miles at that time. That came later, when Lonnie would later work with Miles. Meanwhile, Lonnie decided to move on with his solo career and his debut album Astral Travelling.

On its release in 1973, Astral Travelling was critically acclaimed. It was as if Lonnie had drawn upon all his experience working as a sideman. He’d worked with Pharaoh Saunders, Gato Barbieri, The Jazz Messengers, Leon Thomas, Stanley Turrentine and Miles Davis. This meant he was no ordinary musician. No. Lonnie Liston Smith was an innovator, who was determined to push musical boundaries to their limits and beyond. This was apparent on Astral Travelling. A year later, Lonnie returned with the followup up Astral Travelling, Cosmic Funk.

Cosmic Funk featured six tracks, three of which Lonnie wrote. They were the title-track Cosmic Funk, Beautiful Woman and Peaceful Ones. The other tracks were Wayne Shorter’s Footprints, James Mtume’s and John Coltrane’s Naima. These six tracks were recorded by an all-star band.

Cosmic Funk was released in 1974. Critics heard a different side to Lonnie Liston Smith on Cosmic Funk. It was a much more orthodox album. One thing remained the same, the reaction of critics. Just like Astral Travelling, plaudits and critical acclaim followed the release of Cosmic Funk. Sadly, Cosmic Funk which I’ll tell you about, wasn’t a huge commercial success.

Opening Cosmic Funk is the title-track. An uber funky bass line and percussion set the scene. Briefly, you think you’ve put on a Blaxploitation soundtrack. Soon, hissing hi-hats join as the arrangement takes on a dubby sound. Subtle rasping horns are added before Donald Smith’s vocal is a fusion of power and passion. It’s akin to a cathartic outpouring of emotion. By now, the all-star band are jamming, feeding off-each other. Donald unleashes another vocal powerhouse. He literally screams “citizens of the world, it’s time for world peace.” His impassioned plea is accompanied by a Lonnie’s unique fusion of funk, jazz and soul, which can only be described as Cosmic Funk.

Footprints has an unmistakable sound. Penned by Wayne Shorter, Footprints featured on Miles Davis’ Miles Smiles’ album. Lonnie’s decision to cover the track could be seen as risky. After all, some people see Miles’ version as the definitive take on this track. Here, what’s noticeable is the unlike the previous track, it has a much more orthodox jazz sound. A wandering bass, flourishes of piano and soprano saxophone combine to create an understated, dreamy arrangement. It literally floats along, propelled by the rhythm section and piano. Percussion is sprinkled across the arrangement. Gradually, it grows in power and drama. Lonnie’s piano is key to the arrangement, feeding off the saxophone. After the saxophone drops out, Lonnie steals the show, delivering a masterclass he reinvents a classic track.

Beautiful Woman is the second of a trio of tracks penned by Lonnie. Flourishes of flamboyant piano, percussion and a shuffling rhythm section provide a Latin backdrop for Donald’s tender, heartfelt and seductive vocal. When his vocal drops out, Lonnie’s piano takes centre-stage. He’s accompanied by a subtle saxophone, a myriad of percussion and a pulsating rhythm section. However, it’s Lonnie’s piano that has you captivated. He plays with freedom and flamboyance during a lengthy solo. It’s one of the finest on Cosmic Funk. Meanwhile, Donald scats before picking up the baton from Lonnie and delivering the lyrics to the beautiful paean with passion and sincerity. The result is one of Cosmic Funk’s highlights.

Sais (Egypt) is eight minutes of spiritual jazz. It’s as if Lonnie’s been inspired by Pharaoh Saunders, who he used to play with. This track was penned by James Mtume, who played in Miles Davis’ band. However, it was Sonny Rollins who first recorded Sais (Egypt) on Horn Culture. Here, the arrangement is slow, with a mysterious, mystical sound. Just a lone bass plays before percussion, piano and drums enter. Lonnie’s piano playing is central to the track’s success. His playing is flamboyant, with flourishes of piano cascading across the arrangement. Playing an equally important role is the soprano saxophone. It too, cascades across the arrangement, while percussion and a reverberating piano add to the mystical, futuristic and experimental sound.

Peaceful Ones has a laid-back, mellow sound. The arrangement just meanders along. It has an understated, dreamy and floaty sound with envelops James’ vocal. It’s heartfelt. James sings as if he means every word. Especially the lyric “we’ll live in harmony.” When his vocal drops out the rhythm section, percussion and piano drive the arrangement along. Al Anderson’s bubbling electric bass plays a starring role. It’s panned right and Art Gore’s drums panned left. This add a sense of symmetry to the arrangement and allows James’ tender, beautiful and heartfelt vocal to take centre-stage, where it belongs.

Naima, which was written by John Coltrane, closes Cosmic Funk. Lonnie’s spacious piano reverberates and the arrangement unfolds. James picks up where he left off on Peaceful Ones. Heartfelt and tender describes his vocal. The understated arrangement floats and cascades around him. Bells chime, a flute bubbles and the bass probes. Percussion and Lonnie’s piano plays an important role. Especially when James’ vocal drops out. They briefly enjoy a starring role. Then when James’ vocal returns, they return to playing a supporting role on this wistful, ethereal and beautiful track.

The benefit of hindsight is a wonderful thing. However, anyone familiar with Lonnie Liston Smith’s back-catalogue will tell you that Cosmic Funk was a stepping stone for Lonnie. He found himself one step nearer what would be regarded as his trademark sound. He found his trademark sound on his third album, Expansions, which was released in 1975. For Lonnie, the first two albums of his career were part of a musical voyage of discovery.

During that journey, Lonnie embraced a whole host of ideas musically. That’s apparent on Cosmic Funk. Jazz, funk, Latin, soul and even electronica make an appearance on Cosmic Soul. That would be the case throughout Lonnie’s career. Some of the ideas worked. Others didn’t. These he cast aside, albeit sometimes temporarily. Sometimes, Lonnie would revisit them later in his career. Lonnie was always open minded musically. It was a case of neither ruling anything in, nor out.  That’s why Lonnie Liston Smith will forever be regarded as an musical innovator and visionary. 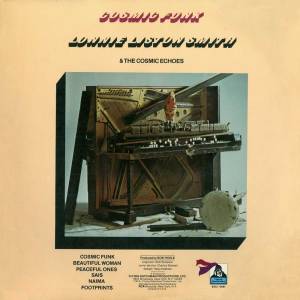 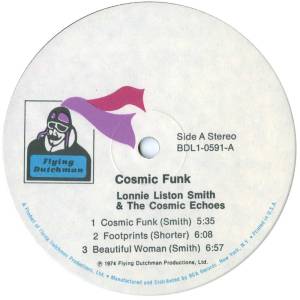