Ever ever since his days with Roxy Music, Brian Eno had been an innovator. He was constantly looking to release groundbreaking music. Musical boundaries he realised, should pushed to their limits, and sometimes, beyond. Sadly, this wasn’t going to be with Roxy Music.

When Brian Eno eventually tired of constantly touring with Roxy Music, he decided to pursue a solo career. In many ways, Brian turned his back on fame and fortune, in pursuit of his art. Glam rock he realised, was a passing phase. Electronic music was the future. He was interested in technology and taking his inspiration from minimalist painting which interested and inspired him, decided to forge a career in ambient music. Brian released his debut solo album Here Come the Warm Jets in 1973, with ambient classics like 1975s Another Green World, 1978s Ambient 1: Music For Airports and Music For Films following soon after. During that period, Brian was busy with his “other career,” as a producer.

This included David Bowie’s Berlin Trilogy of 1977s Low and Heroes and final installment, 1979s Lodger. Since then, Brian Eno has released over twenty albums and produced some of the biggest groups in music and forged a career as a remixer. He’s produced albums by Talking Heads, Devo, U2 and Coldplay. Brian has also worked as a remixer

Remixing was just the latest string to Brian Eno’s bow. He was asked to work with some of the biggest names in electronic and dance music. Brian’s credits as a remixer included Massive Attack and Depeche Mode. Apart from production work and remixes, Brian Eno has collaborated with a whole host of artists.

Eclectic. That describes the artists Brian Eno has collaborated with. He’s collaborated with everyone from includes David Byrne, Robert Fripp and Robert Wyatt. However, in the last few years, Brian Eno hasn’t been as prolific as his early years. His last solo album was 2012s Lux. Released to critical acclaim, the Godfather of electronic music was back, and better than ever. Sadly since Lux, nothing has been heard of Brian Eno. That was until recently, when Brian released a collaboration with Karl Hyde of Underworld, Someday World, which was released by Warp.

Released as Eno-Hyde, Someday World features nine tracks.  On Someday World, Brian Eno and Karl Hyde joined by a cast of guest artists. This includes some big names. The biggest of all is, without doubt, Andy McKay of Roxy Music. An unlikely collaborator is Coldplay’s Will Champion. He joins the major league on Someday World, rubbing shoulders with Brian Eno, Andy MacKay and Karl Hyde. A new name is Fred Gibson. He’s only twenty-two, but co-produces Someday World. Fred also cowrote two tracks on Someday World.

The two tracks Fred cowrote on Someday World are Daddy’s Car and A Man Wakes Up. Fred cowrote these two tracks with Brian Eno and Karl Hyde. Brian and Karl cowrote The Satellites, Witness, Strip It Down, Mother Of A Dog and Who Rings The Bell. When I Built This World and To Us All were penned by Brian Eno. These nine tracks became Someday World.

Just like so many previous Brian Eno projects, Someday World was released to critical acclaim. Its a haunting and intriguing musical through musical genres. Everything from Afro-beat, ambient, electronica, funk, jazz, pop, rock and soul can be heard Someday World’s nine tracks. As you’ll realise when I tell you about Someday World, it’s another groundbreaking collaboration from he Godfather of electronic music.

Someday World opens with The Satellites. It has a haunting, intriguing sound. A plucked guitar sits amidst shimmering synths. The arrangement grows, veering between discordant and dramatic. Then it’s all change. An explosion of rock guitars are unleaded. They sit above rhythm section and banks of synths. Seamlessly, rock meets electronica. With the band in the tightest of grooves, they power the arrangement alongs. That sets the scene for Brian Eno’s deliberate vocal. This works. You focus on the lyrics. Later, punchy, cascading horns join the rhythm section and synths in driving this anthemic track along.

A myriad of synths and drums combine as Daddy’s Car unfolds. It has an eighties sound and influence. That’s down to the drums, synths and Karl Hyde’s soulful vocal. Think Human League and you’re halfway there. The unmistakable sound of a bass synth and horns help the drums and synths power the arrangement along. Sometimes, the track takes on a hypnotic sound. Other times, slick hooks reveal their secrets. Karl’s soulful, heartfelt vocal plays a part in this. Especially, with sweeping, harmonies accompanying him on a track that’s variously hypnotic, hook-laden and soulful.

A Man Wakes Up is quite different from the previous track. It has a futuristic, almost sci-fi sound. Karl Hyde takes charge of the vocal, delivering it in urgent, dramatic bursts. Meanwhile, the bank of synths join the funky, robotic, rhythm section. Eighties drums crack, stabs of keyboard and a funky synth join forces. Rocky guitar add a contrast. Handclaps ad drama  before acrystalline guitar solo weaves its way across the arrangement. Later, the arrangement matches the senesce of urgency in Karl Hyde’s vocal as electronica, rock, funk and soul melts seamlessly into one.

Witness is the signal for Eno-Hyde to get a little funky. Chiming guitars joins a probing bass and synths. The result is more than a little funky. After that, banks of synths build the arrangement. By the time Karl’s vocal enters, it’s obvious that this track is more than a little special. Karl Hyde’s vocal wistful and rueful. He doesn’t reveal the track’s melodic delights too soon. With the help of synths and backing vocals, they build the arrangement. Stabs of Jerry Lee Lewis piano and a deadpan vocal add to the drama. Still, it’s not time to unleash another hook-laden anthem. When it is, it’s well worth the wait to hear the delights of another genre-melting anthem.

Stabs of a bass synths open Strip It Down, before drums crack and a keyboard adds a melodic contrast. The arrangement is panned. It reverberates, taking on a dark, haunting and hypnotic sound. Especially when Brian Eno delivers his vocal. It too, is dark and haunting. Meanwhile, the arrangement veers between dark and mesmeric to melodic. Banks of synths and keyboards play an important part in the track’s dark, driving sound. So do the strings, piano and guitar. They all play their part in an enigmatic and innovative track that should stand the test of time.

Mother Of A Dog has an understated, spacious arrangement. Drums and synths create a rumbling arrangement, before a bluesy harmonica signals the arrival of Karl’s haunting vocal. Brian Eno’s rumbling bass joins a somewhat futuristic, but haunting arrangement. This is perfect for Karl’s Neil Young inspired vocal. Drama builds, and a futuristic, sci-fi soundscape unfolds. Quite simply, this is the highlight of Someday World.

A thunderous drum and guitar combine as Who Rings A Bell gradually reveals its treasure trove of secrets. After this, the arrangement veers between understated, ethereal, thoughtful and graceful to futuristic and robotic. Swathes of cooing harmonies accompany Karl’s enigmatic, emotive vocal. Meanwhile, musical genres melt into one. Elements of ambient, electronica, experimental, jazz and rock are combined by Eno-Hyde and friends, resulting in a musical treasure trove of secrets.

Cinematic describes the introduction to When I Built The World. Shimmering, quivering strings and pulsating, pounding drums give way to Brian Eno’s vocal. It’s heartfelt and rueful. Especially when he sings “when I built this world I built it full of guilt, I built with regret and pain and sin.” As he delivers his vocal, the drama builds. Synths shimmer and bubble, drums  pulsate. Then the track takes on futuristic, funky, dance-floor friendly sound. Everything from Andy MacKay’s saxophone, horns, a vocoder, rocky guitar and funky bass join a myriad of synths in showing another side to Eno-Hyde’s music. It’s cinematic and dance-floor friendly, albeit with a futuristic, dramatic sound.

To Us All closes  Someday World. It has a much more understated sound. It’s almost mellow, with synths and crystalline guitars joining forces. The arrangement meanders along. Guitars become rocky and synths shimmer as Brian delivers the lyrics. He’s like a seer, pondering what the future has in hold. Hopefully, another Brian Eno solo album.

It’s been two years since we last heard from Brian Eno. That was his 2012 solo album Lux. It was triumphant comeback from the returning hero, and Godfather of electronic music. Since then, Brian Eno has been working with two generations of musicians. Brian’s main collaborator was Underworld’s Karl Hyde. They’re both innovators, who are determined to create groundbreaking and inventive music. The same can be said of Brian’s old friend from Roxy Music, Andy McKay. Another collaborator was Coldplay’s Will Champion. Then there’s another of Brian’s trusty lieutenants John Reynolds. With such a multitalented cast of collaborators, it’s no surprise that Someday World was such a critically acclaimed and commercially successful album.

Just like every album Brian Eno has released, it’s an album that sees him move forward. For Brian Eno standing still is like going backwards. That’s never going to happen. Especially with three generations of groundbreaking musicians to collaborate with. The result was a genre-melting album.

Everything from ambient, Afro-beat, blues, electronica, funk, jazz, pop, rock and soul melts into one during the musical journey that’s Someday World. The music veers between funky to futuristic to dark and dramatic and right through haunting and hypnotic. Other times it melodic or mesmeric. Sometimes, the music is uplifting and joyous. Especially when slick poppy hooks are unleashed on The Satellites and Witness. These tracks should introduce a new generation to Brian Eno and Karl Hyde’s music. 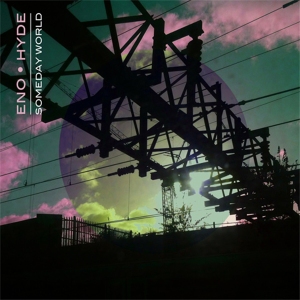