Nearly six years ago, in December 2008, the Kasai Allstars released their critically acclaimed  debut album In The 7th Moon, The Chief Turned Into A Swimming Fish and Ate The Head Of His Enemy By Magic. On its release, critics were won over by the Kasai Allstars’ music. They hadn’t heard music like this before. Here was music that was totally unique. It was also irresistible, joyous, otherworldly, trance-inducing, mythical and mystical. So, critics and music lovers eagerly awaited the Kasai Allstars’ sophomore album.

Since the release of  7th Moon, The Chief Turned Into A Swimming Fish and Ate The Head Of His Enemy By Magic very little has been heard of the Kasai Allstars. They made an appearance on 2011s Congotronics v Rockers. This was a collaboration between ten Congolese and indie musicians. The result was a glorious cultural collaboration. It was a brief reminder of what the Kasai Allstars were capable of. Surely, their sophomore album wasn’t far away?

Three years later, the Kasai Allstars are ready to release their sophomore album, Beware The Fetish on Crammed Discs. It’s a double album featuring twelve-tracks of the Kasai Allstars trademark sound. The twelve tracks last over 100 minutes. They showcase the Congolese collective’s genre-melting sound. Just like their debut album, Beware The Fetish is music that you must immerse yourself in. If you do, you’ll discover music that’s irresistible, joyous, otherworldly, trance-inducing, mythical and mystical. That’s down to the fifteen members of the Kasai Allstars.

The Kasai Allstars are a collective of fifteen Congolese musicians, based in Congo’s capital Kinshasa Originally, they were members of five bands based in the Kasai region. They come from very different backgrounds. Five different ethnic backgrounds are represented in the Kasai Allstars. Different cultures, languages and musical traditions play their part in the success story that’s the Kasai Allstars. Essentially, the Kasai Allstars are a cross-cultural collaboration. They’re an example to the people of Congo, as they’re able to live side-by-side happily and peacefully. In doing so, they create their unique brand of irresistible music. It’s influenced by traditional Congolese music.

Beware The Fetish sees the Kasai Allstars continue to push musical boundaries. This time, their music is even more eclectic than on In The 7th Moon, The Chief Turned Into A Swimming Fish and Ate The Head Of His Enemy By Magic. There’s a reason for this. They’re joined by a several guest artists. Among the vocalists are Kabongo, Muambuyi, Tshimanga, Mi Amor, Tandjolo, Grand Prêtre, and the late, lamented Mbuyamba Nyunyi. Each of these vocalists breath life, meaning and emotion into lyrics about social problems, sorcery and traditional Congolese wisdom. They help the Kasai Allstars seamlessly combine musical genres and influences. The same goes for instruments.

Opening disc one of Beware The Fetish is The Chief’s Enthronement / Oyaye. Crystalline guitars set the scene for a myriad of percussive delights, handclaps and drums. Bursts of a joyous vocal emerge from the arrangement. They’re then sung in a call and response style. Meanwhile, a rhythm is beat on a drum. Sound flit in and out the arrangement. They tease and tantalise you. Some make only a fleeting appearance. Others like the thunderous drum, chiming guitars and percussion are omnipresent. The same can be said of the vocals. Later, the track becomes hypnotic and mesmeric. Then it returns to its celebratory, joyous sound.

Jangling guitars open Yangye, The Evil Leopard and the arrangement bursts into life. It’s akin to a call do dance. As the guitars flits across the arrangement,  percussion, drums and vocals enter. Again, the vocal is sung in a call and response style. Soon, the music becomes hypnotic. Trance-inducing describes the music perfectly. So does urgent and frenetic. Layers of music assail you. It assaults your senses, and its mystical properties has you utterly spellbound.

Understated describes the introduction to Salute To Kalombo. Drums, percussion, likembes and thumb pianos are deployed. They provide the backdrop to the vocal. It’s impassioned, heartfelt and soulful. At the start, it’s sung in a call and response style. Then it takes centre-stage. That’s where it belongs. It’s a cathartic outpouring of emotion. It grows in power and passion. So does the arrangement. The rest of the Kasai Allstars chant, holler and provide a thunderous, dramatic backdrop. However, taking centre-stage during this epic is an impassioned, heartfelt vocal.

Buzzing guitars flit across the arrangement to Down And Out. They’re accompanied by a myriad or percussion and hypnotic drums. It’s a compelling combination. Elements of Afro-beat, traditional Congolese music, funk, jazz and rock melts into one. Then there’s the vocal. It’s a delivered with power and passion. Soul-baring describes the vocal. Again, it’s sung in a call and response style.  Meanwhile, the pulsating arrangement meanders along. Crucial to its sound are the jazz-tinged guitars and subtle percussion. Stealing the show is the vocal. Literally, it oozes emotion as the Kasai Allstars provide a pulsating backdrop.

Crystalline, jangling guitars ring out as He Who Makes Bush Fires For Others reveals its secrets. Bursts of joyful, celebratory vocals emerge from the arrangement. Drums and bass pound, while guitars chime. Then there’s the percussive delights of the Kasai Allstars. That’s one of their secret weapons.  They play a part in the track’s mesmeric sound. However, just like other tracks, the vocal is at the heart of the track’s success. It’s delivered with emotion. Then punchy, urgent harmonies interject. They proceed to drive each other to greater heights, as the Kasai Allstars deliver a vocal masterclass.

As They Walked Into The Forest On A Sunday, They Encountered Apes Dressed As Humans closes disc one. Frantic percussion, drums, xylophones and likembes combine. They create the an understated backdrop for the vocal. It’s delivered tenderly, but with sincerity and emotion. Harmonies interject, responding to the call. Later, the tempo increases. There’s a sense of urgency. The vocal becomes a frantic vamp. Hollers and scream escape from the arrangement, which grows in power and drama. It seems that the Kasai Allstars have decided to kick loose. Things get a little funky. They fuse jazz, Afro-beat and traditional Congolese music, ensuring that disc one ends on a glorious high. This leaves you wanting more. So, here comes disc two.

Thus Spoke The Ancestors opens disc two of Beware The Fetish. It has a traditional Congolese sound. It sounds like a song of praise. The Kasai Allstars sing unaccompanied. It’s really powerful and works well. You’re captivated as they give thanks. Midway through the track, things change…totally. It’s as if they’ve done a u-turn and the track explodes. Genres melt into one. Everything from funk, R&B, blues, Afro-beat, jazz and rock melts into one. Jangling piano, thundering drums and percussion join searing guitars. A powerhouse of a vocal encourages the Kasai Allstars to kick loose. They do, and they revel in it, resulting in a glorious, innovative and genre-melting track where the Kasai Allstars show another side to their music.

Chiming guitars are panned left on Beware The Fetish. Percussion and drums join as the arrangement unfolds. After the previous track, it’s a case of expect the unexpected. The vocal is delivered quickly. It’s delivered with power and passion. Waves of harmonies, jangling guitars, drums and percussion accompany it. Before long, you’re spellbound. The music veers between dramatic, haunting and mesmeric. It worms its way into your soul. It’s also a hypnotic call to dance which you can’t help but submit to.

Searing machine gun guitars are unleashed, joining percussion on In Praise Of Homeboys. They set the scene for the chanted vocal. It’s joyous, soulful and provides a contrast to the raw power of the arrangement. Before long, the chanted vocal becomes a vamp. It veers between a chant and vamp, as the arrangement takes on a dramatic, hypnotic sound. It’s irresistible and shows yet another side to the Kasai Allstars, as they spread their wings musically.

The Dead Don’t Dance is a near thirteen minute epic. Glorious crystalline, chiming guitars set the scene. They’re joined by percussion, xylophones, percussion, likembes and drums. They create a big, bold, booming arrangement. The vocal is sung in a call and response style. When the Kasai Allstars harmonise, they’re at their very best. The arrangement is pretty good too. Searing guitars, a buzzing bass, drums and the percussion. It’s a potent and powerful combination. Perfect for the soulful delights of the Kasai Allstars.

As They Walked Into The Forest On A Sunday, They Encountered Apes Dressed As Humans unfolds, the arrangement assails and surrounds you. Layers of music assault your senses. Quickly, it becomes hypnotic and trance-inducting. Very different is the vocal. It’s impassioned and emotive. Delivered soulfully, harmonies sweep in. Then it’s all change. The vocal grows in power, becoming a vamp. Similarly, the arrangement become frantic and dramatic. Thundering drums, a myriad of percussion and bursts of vocal escape from the dramatic, pulsating arrangement. The Kasai Allstars have kicked loose, before reaching a dramatic crescendo.

The Ploughman (Le Laboureur) closes Beware The Fetish. Slowly and moodily, a blues-tinged guitar solo takes centre-stage. It accompanied by whoops and hollers. However, the Kasai Allstars are only toying with you. Having teased you, they unleash a rocky arrangement. They’ve saved the best until last. The same can be said of the vocal. It’s rousing and raucous, sung in a call and response style. Blistering, driving guitars, thundering drums and crashing cymbals are at the heart of the arrangement. Elements of rock, psychedelia and Afro-beat combine as the Kasai Allstar showboat their way through nine minutes of anthemic, everyman music.

After six years away, the Kasai Allstars are back. They certainly don’t do things by halves. Beware The Fetish is a double album, featuring twelve songs, lasting over 100 minutes. The best way to describe this music is genre-melting. As a starting point, the Kasai Allstars take traditional Congolese music, specifically festive and ritual music. This is a controversial starting point. It used to be played in the bush. However, it was eventually banned. The music was perceived by the establishment as scandalous. This was because of some of the erotic dances and the paeanistic trance rituals that accompanied the music. In the establishment’s eyes, this was perceived as sacrilegious, sometimes, even satanic. So, the music is hugely controversial.  Despite this, the Kasai Allstars use this as a starting point for their unique and irresistible music.

To that, they add everything from Afro-beat, funk, gospel, jazz, psychedelia, rock and soul. Over twelve tracks, these musical influences seamlessly, melt into one. This is what we’ve come to expect from the Kasai Allstars.

For those unfamiliar with the Kasai Allstars’ music, it’s like nothing you’ve ever heard before. Here is music that’s totally unique. It’s dramatic, irresistible, joyous, mythical and mystical, otherworldly, spiritual and trance-inducing. I’d also call Beware The Fetish a glorious cultural collaboration. There’s a reason for this.

Within the Kasai Allstars are five different ethnic groups. In other walks of Congolese life, this could be an explosive combination. Not here. They’re able to live side-by-side happily and peacefully. Music you see, brings the fifteen members of the Kasai Allstars together. Their shared love of music means they’re able to put aside cultural and political differences. In doing so, they create their unique brand of irresistible, joyous and trance-inducing music. 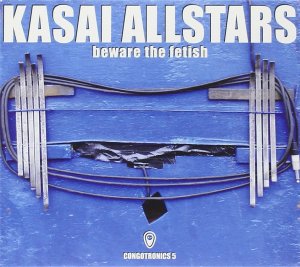