That’s why Ace Records recently released Night Walker-The Jack Nitzsche Story Volume 3. It’s the third volume in Ace Records Producer Series dedicated to the man born Bernard Alfred Nitzsche Volume 3,on 22nd April 1937, in Chicago. Mostly, Night Walker-The Jack Nitzsche Story Volume 3 concentrates on the sixties and seventies. This was the most prolific period in the career of the man who became known as Jack.

Mention the name Jack, and immediately, people knew who your were talking about, Jack Nitzsche. His career began in 1957, when he moved to Los Angeles. He’d moved to L.A. dreaming of becoming a jazz saxophonist. Instead, he found himself copying musical stores. It was during this period, that Jack met Sonny Bono.

The first song that Jack and Sonny wrote was a stonewall pop classic, Needles and Pins. They wrote the song with Jackie DeShannon in mind. It gave Jackie a minor hit single in the US, reaching number eighty four in the US Billboard 100. Over in Canada, Needles and Pins reached number one. That was the start of the commercial success Jack Nitzsche would enjoy.

By 1963, Jack had enjoyed the first hit single of his solo career. This was Lonely Surfer, an instrumental track. His next hit single was a remake of Link Wray’s Rumble. It was given a big band, swing sound. Not for the last time, would Jack take a track in a direction most other producers would never have envisaged.

Especially, when he started working with another maverick producer, Phil Spector. Together, they pioneered the Phil Spector’s legendary Wall Of Sound. One of Jack’s finest moments with Phil Spector was arranging, conducting and orchestrating Ike and Tina Turner’s 1966 single, River Deep, Mountain High. Incredibly, River Deep, Mountain High failed to chart in the US, but reached number three in the UK. Phil Spector took River Deep, Mountain High failure to chart in the US as a personal affront. He withdrew from the music industry for two years, and many people believe that’s when his decline. Tragically, Jack’s career would undergo a similar decline in 1974, when two decades of constant hard work would take its toll. In the early sixties, where Night Walker-The Jack Nitzsche Story Volume 3 begins, Jack looked like being one of the most successful men in music.

Arranger, producer, singer and songwriter. Jack was all these things. That’s demonstrated on Night Walker-The Jack Nitzsche Story Volume 3, which features twenty-six tracks. Twenty-four are from the sixties and seventies. This includes contributions from Merry Clayton, Buffalo Springfield, The Crystals, Mink Deville, The Ronettes, The Everly Brothers, Jackie DeShannon, Michelle Phillips and Jack himself. There’s also two tracks from later in Jack’s career. The first is a track from C. C. Adcock.

Opening Night Walker-The Jack Nitzsche Story Volume 3 is C. C. Adcock’s Castin’ My Spell. This was a track that Jack recorded in 1999, a year before his death. Written by Alvin and Edwin Johnson, this was one of two tracks Louisiana rocker C.C. released. Castin’ My Spell featured on the 2001 compilation Young Guitar Slingers: Texas Blues Evolution. When C.C. recorded with Jack he was only twenty eight. He’d only released one album, C.C. Adcock in 1994, on Island Records. Five years later, C.C. was back fusing blues and rocky licks, while delivering a voice that sounds as if it’s been aged with bourbon and Marlboro. Why C.C. didn’t enjoy more commercial success seems strange, given his indisputable talent.

Poor White Hound Dog was a collaboration between Jack and Merry Clayton, who contributes a powerhouse of a vocal. The track was part of the soundtrack for the Performance soundtrack. It featured an all-star cast. James Fox, Mick Jagger and Anita Pallenberg starred in Performance, which was directed Donald Cammell.  Jack arranged, penned and produced the track, which features some glorious slide guitar. Then there’s a vocal from one of soul’s best kept secrets, Merry Clayton. It’s dropped in when the slide guitar drops out and proves a worthy and captivating replacement. Glorious.

Darlene Love recorded the Gerry Goffin and Carole King penned A Long Way To Be Happy in 1965. Arranged by Jack and produced by his mentor Phil Spector, it epitomises the music coming out of Phil’s studio in the first half of the sixties. So much so, that it sounds as if it was recorded back then. Once the song was cut, it was left in the vaults until 1976, when it was released on the compilation Rare Masters Volume 2. It’s a poignant reminder of the Phil Spector and Jack Nitzsche in full flow.

Follwing the success Jack enjoyed as a producer and arranger, he secured a recording contract with Reprise. He released Night Walker as a single in 1965. As we’d expect from an innovator like Jack, he fuses the unlikeliest of instruments. This means a bursts of a surf guitar sits atop an orchestral arrangement. Quite simply, it’s delicious combination of contrasts.

Jack made his name working with Phil Spector in the early sixties. He arranged many of the tracks Phil produced. These track epitomise the Phil Spector sound. That’s the case with two tracks on Night Walker-The Jack Nitzsche Story. The first is The Crystals’ 1964 single Little Boy. It was written by Ellie Greenwich, Jeff Barry and Phil Spector. Featuring LaLa Brooks on lead vocal, the single stalled at just number ninety-two in the US Billboard 100. Sonny Bono foresaw this, saying their was too much echo on the single and  it wouldn’t get played on radio. Phil disagreed, saying “there was no such thing as too much echo.” Despite its commercial failure, thes track epitomises the Phil Spector sound

This is also the case with The Ronettes’ 1965 single Is This What I Get For Loving You. A haunting tale of heartbreak and hurt, it was written by Gerry Goffin and Carole King. On its release, it stalled at just number seventy-five in the US Billboard 100. Phil Spector’s sound had almost run its course. However, he remains one of the most innovative producers in musical history.

Three years after they formed in San Francisco in 1974, Mink Deville released Just Your Friends as a single in 1977. This isn’t a new track. Karen Verros and Crazy Horse had both recorded the song. Mink Deville transform Just Your Friends into a heartfelt blues rock track. It featured on their sophomore album Return To Magenta, which reached number 126 in the US Billboard 200 in 1978. Despite Jack arranging and producing Return To Magenta, Mink Deville never enjoyed the commercial success their talent deserved.

During the fifties and early sixties, The Everly Brothers enjoyed a string of hit singles and albums. The Marge Barton penned June Is As Cold As December, is a track from their 1966 album In Our Image. This country-tinged ballad failed to chart. This wasn’t new. For the last few years, commercial success had eluded Don and Phil Everly. Even Jack’s production skills couldn’t revive their flagging fortunes. He did produce a true hidden gem, June Is As Cold As December.

The first song Jack cowrote, was Needles In Pins. He cowrote the track with Jackie DeShannon in mind. That was in 1963. Two years later, in 1965, Jack arranged Try To Forget him, which was a track from her 1965 album You Won’t Forget Me. Written by Jackie and produced by Dick Glasser, it’s the perfect showcase for Jackie’s needy, hurt-filled vocal.

After the demise of the Mamas and Papas, Michelle Phillips embarked upon a solo career. In 1977, she released Victim Of Romance as a single. It was written by Moon Martin and arranged and produced by Jack. Victim Of Romance was the title-track to her debut album. It’s a delicious reminder of the early sixties girl group, that’s full of slick poppy hooks.

In 1964, The Righteous Brothers were about to cover Nino Tempo’s I Still Love You. Jack was called in to arrange and conduct the track. It would feature on their 1965 album This Is New! Sadly, I Still Love You wasn’t a commercial success. Their world would change later in 1964, when they recorded their classic You’ve Never Lost That Loving Feeling, which reached number one in the US and UK. Although I Still Love You wasn’t as successful as You’ve Never Lost That Loving Feeling, it has one thing in common, its quality.

Originally, The Rip Chords consisted of Phil Stewart and Ernie Bringas. Later, producer Terry Melcher and co-producer Bruce Johnston joined the group, who became synonymous with the surf and hot rod genres. That’s apparent on Here I Am, which was produced by Terry Melcher, the son of Doris Day. He needed an arranger and conductor, so got in touch with Jack, who at that time, was working with Phil Spector. Jack’s first Rip Chords’ single was Here I Stand. Featuring tight, heartfelt harmonies, surf guitars and rasping horns it’s a tantalising taste of The Rip Chords as they embarked upon their musical adventure.

Although I’ve only mentioned fourteen of the twenty-six tracks on Night Walker-The Jack Nitzsche Story Volume 3, I could easily have chosen any track. That’s testament to the quality of music Jack Nitzsche arranged, composed, conducted, produced, sang and wrote. That’s no surprise, growing up, Jack dreamed of making a career as a jazz saxophonist. Although his dreams didn’t quite work out, Jack lived the dream.

His career lasted five decades. It began in 1959 and Jack was working until just before he died. One of the final artists he was working with, was C.C. Adcock. So, it’s fitting C.C. Adcock’s Castin’ My Spell opens Night Walker-The Jack Nitzsche Story. After that, there’s contributions from Merry Clayton, Buffalo Springfield, The Crystals, Mink Deville, The Ronettes, The Everly Brothers, Jackie DeShannon and Michelle Phillips. They’re just a few of the many artists Jack worked with during the most prolific years of his career.

That’s the sixties and seventies. During that period, Jack was working nearly non-stop. That’s why he has over 900 credits to his name. Sadly, his heavy workload took its toll. Jack suffered from depression and struggled valiantly with drug abuse. Between 1974 and the late-seventies, Jack kept a low profile. When he made a comeback, Jack hadn’t lost his Midas touch. Proof of that is Michelle Phillips’ 1977 single Victim Of Romance. Full of slick poppy hooks and with a nod to his early career, it was as if Jack had never been away. After that, his career lasted another twenty years.

Sadly, Jack passed away on 25th August 2000. He was only sixty-three years old. That’s no age at all. His legacy are 900 tracks he arranged, composed, conducted, produced, sang and wrote. So it’s no surprise that Ace Records have had to release three volumes of Jack Nitzsche’s music to do his musical legacy just. The latest instalment in Ace Records’ homage to Jack Nitzsche  is Night Walker-The Jack Nitzsche Story Volume 3, which was recently released by Ace Records. 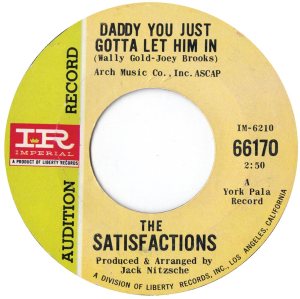 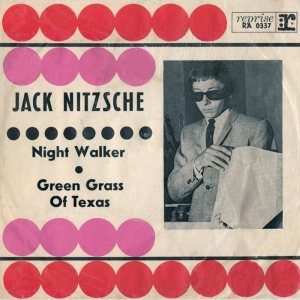 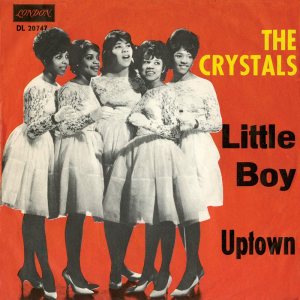