Back in the seventies and eighties, major record labels were reducing the money the were spending on jazz.  No longer was jazz seen as a priority. In the eyes of many record label executives, it was yesterday’s music. So, they weren’t willing to risk scarce resources on new jazz music. However, they were happy to reissue classic jazz albums and fusion. The lack of spending on new and innovative jazz artists would prove ironic.

During the seventies and eighties, there was an explosion in interest in jazz music. In American schools and colleges, a record number of students were playing jazz. They went home, and listened to the new jazz stations that were springing up across America. These radio stations were community based and part of the democratisation of jazz music.

One of the effects of the civil rights movement of the sixties and early-seventies was that black Americans reclaimed jazz music. It had proved an important part of the fight for equality. Many jazz legends played an important part in the civil rights movement. This included Duke Ellington, John Coltrane, Max Roach, Charles Mingus, Charlie Haden and Nina Simone. They inspired a generation of black Americans to become involved in jazz.

These privately pressed singles and albums were recorded by artists whose career was beginning. They sold their new releases at concerts. Sometimes they were played on the newly founded radio stations. It was like an underground musical revolution. Sadly, much of the music released during this musical revolution went almost unnoticed. Not any more.

A generation of DJs, record collectors and music lovers have dedicated themselves to discovering the best of these private pressings. This includes DJ, record collector,compiler and crate-digger extraordinaire  Kev Beadle. Kev has dedicated his life to the pursuit of the hidden musical gem. As a result, Kev has an enviable record collection. A tantalising taste of his record collection can be found on Kev Beadle Private Collection Volume 2, which will be released by BBE Music on 28th July 2014.

Ever since the eighties, Kev Beadle’s life has revolved around music, especially jazz and soul. Since then, Kev has worked in many roles within the music industry. Kev’s worked in A&R, promotion, managed labels and run his own, sadly missed label Clean Up. Like many DJs, Kev has added production to his ever expanding CV, under the pseudonym Messengers. Then there’s compilations.

During Kev’s career, he’s compiled compilations for Blue Note, Cadet and of course BBE Music. For Cadet, Kev compiled The Best of Terry Callier On Cadet, plus five of Cadet Grooves. Kev was also the man behind three volumes of Blue Note’s Capitol Rare. Then there was Kev’s BBE Msuic debut.

This was Nu Jazz Generation II, which  was released on BBE Music, back in 2000. Thirteen years later, Kev made his BBE Music comeback with Kev Beadle Presents Private Collection. There’s more to Kev Beadle than a compiler. This includes DJ-ing, which has been a mainstay of Kev’s career.

Whether it’s DJ-ing on radio, or in clubs, Kev’s just as comfortable. Kev’s one of the longest serving DJs on Solar Radio, having spent thirteen years on the station. It’s club DJ-ing that many people will know the name Kev Beadle. Since the eighties, Kev has been spinning soul and jazz. However, he’s never afraid to investigate other musical genres, Kev will spin music from past, present and sometimes, the future side-by-side. Mind you, Kev’s musical influences prepared him for an appreciation of an eclectic selection of music.

For Kev Beadle, some of his earliest musical memories are heading to London clubs like The Horseshoe, on Tottenham Court Road, where Paul Murphy DJ-ed. After that, Kev would head on a voyage of discovery, tracking down hard-to-find tracks. Soon, Kev was on the other side of the decks, spinning the wheels of steel.

Soon, Kev was spinning at London’s legendary Wag Club. There he met Giles Peterson, Bob Jones, Chris Bangs. For Kev, this was the next step in his musical education. They enjoyed a good-natured rivalry, seeing who could break tracks. Then the next night Kev would be involved in, would make musical history.

Out of this came the Acid Jazz label, which in 2012, celebrated its twenty-fifth anniversary. These Sunday afternoons at Dingwalls would become legendary. Open-minded, music hungry music fans, heard and enjoyed, old soul and jazz tracks being unearthed almost on a weekly basis. Out of these afternoons, a whole scene was born, with Kev Beadle at its heart.

Since then, Kev Beadle has remained at the heart of London’s music scene. Although DJ-ing takes up most of Kev’s time, he still finds time to compile compilations. His latest compilation is the eleven track Kev Beadle Presents Private Collection Volume 2.

There’s no better way to open Kev Beadle Presents Private Collection Volume 2 than with Archie Shepp’s Song For Mozambique. It’s an introduction to one of the most innovative free jazz musicians of his generation, Archie Shepp. Song For Mozambique is a track from his 1975 album A Sea Of Faces. It was recorded in Milan on the 4th and 5th August 1975. By then, major labels weren’t interested in artists like Archie. European labels were. They recognised that he was a groundbreaking music. That’s apparent here as he combines elements of avant garde, free jazz, spiritual jazz and social comment.

Pianist Stanley Cowell’s career began back in the sixties. His debut album was 1969s genre-melting Blues For The Viet Cong. Twelve years and six solo albums later, Stanley was about to release his eighth album New World. It was released on Galaxy, an imprint of Fantasy in 1981. One of New World’s highlights was I’m Tryin To Find A Way. It has a joyous, dramatic and uplifting sound. Jazz-tinged, soulful and funky, it’s a hidden gem with a summery vibe.

The Janet Lawson Quintet only released two albums. Their debut was their 1981 eponymous album. Three years later, they returned with Dreams Can Be. It was released in 1984, on the Omnisound label. It’s the perfect showcase for Baltimore born scat singer. She was born into a family of professional musicians and made her debut on Eddie Jefferson’s 1977 album Main Man. This lead to her releasing a cover of Jon Lucien’s Dindi. Just like Dindi, Dreams Can Be is one of the real highlights of Janet’s discography.

Flautist, saxophonist and piccolo player Kathryn Moses only ever released two albums. Her debut album was her 1976 eponymous album. Three years later, in 1979, Kathryn returned with Music In My Heart. One of the most beautiful tracks on Music In My Heart is the title-track. An understated arrangement accompanies the ethereal beauty of Kathryn’s tender vocal. When her vocal drops out she plays flute. It floats above the Latin-tinged arrangement. Just the like the flute, it grows in power and drama. Later, Kathryn’s vocal makes a welcome return. She scats as this joyful fusion of jazz and Latin heads towards its crescendo, leaving you wanting more.

Originally, Seawind were called Ox and based in Hawaii. In 1976, they made the decision to move to Los Angeles. Partly, this was because of drummer Harvey Mason. He got them a regular gig playing at the Baked Potato in Studio City. Before long, they came to the attention of CTi Records who signed Seawind. They quickly released two albums, 1976s Seawind and 1977s Window Of A Child. After that, the left CTi Records. One of their finest moments at CTi Records was He Loves You, a track from their debut album. Elements of smooth jazz, fusion and soul melt into one during this beautiful ballad.

From Britain we head to Brazil. That’s where Grupo Medusa were from. They released two albums in the early eighties. Their debut was Grupo Medusa, which was released in 1981. Ferrovias was released two years later in 1983. It’s another eclectic album. That’s apparent on the title-track Ferrovias. Elements of bossa nova, funk, jazz and even smooth jazz are combined beautifully by Grupo Medusa to create a laid back, Latin vibe.

It was in 1981, that Hungarian jazz group Dimenzio released their eponymous album. It featured Bamba (The Fool). Dimenzio take a different approach They deploy synths before taking the track in the direction of jazz. Not just any type of jazz. No. Fusion is combined with smooth jazz. There’s also hints of funk and Latin. It’s a genre-melting musical adventure. Dimenzio innovate and create a groundbreaking slice of dramatic, futuristic and haunting 21st jazz.

1973. That was the year that Cortijo and His Time Machine released their one and only album, Y Su Maquina Del Tiempo. It features Carnaval a pulsating salsa that’s akin to a call to dance.

Eight years after releasing his 1962 debut album, Miles Of A Genius, Barry Miles released his eponymous sophomore album. Released on Poppy Music in 1970, Barry Miles featured Hijack. Barry’s tight and talented band deliver a series of masterclasses during this early example of fusion. Stealing the show are Barry on piano and guitarist Jack Wilkins. Both play successful roles during this Hijack.

Closing Kev Beadle Private Collection Volume 2 is Appendix’s Autumn Song. Appendix are a Swedish group that most people won’t be familiar with. That’s unless you’re a fan of fusion. They were around during the seventies and eighties. Their only album was 1973s Space Trip, which featured Autumn Song. It was released in 1973, on the Amigo label. Although a fusion group, Autumn’s music focused more on jazz, than rock. That’s apparent on Autumn Song, an understated and beautiful, jazz-tinged ballad. Later, the music briefly becomes funky and futuristic thanks to a wah-wah guitar. When it drops out, the rest of Appendix create the minimalist arrangement that accompanies a heartfelt, soul-baring vocal.

That’s within Kev’s enviable and ever expanding record collection. Kev Beadle you see, is a prolific record collector. He’s been collecting records all his life. Just like DJ-ing, it’s been a labor of love for him. It allows Kev to introduce people to music that they might never hear. That’s the case on Kev Beadle Private Collection Volume 2. It’s a compilation that literally oozes quality. That’s the case from the opening bars of Archie Shepp’s Song For Mozambique right through to the closing notes of Appendix’s Autumn Song. In between, we hear a collection of lost classics, hidden gems and rarities. Kev has dug deep into his record collection to discover the dozen delights on Kev Beadle Private Collection Volume 2.

Compiling a compilation like Kev Beadle Private Collection Volume 2 takes time. It also tales persistence and dedication. In Kev’s case, his persistence and dedication has paid off. Originally, Kev would start with a long list of tracks from his record collection. Gradually, he whittled that list down to just twelve tracks. That can’t have been easy. I’m sure deciding which tracks to include and exclude gave Kev many a sleepless night. Eventually, Kev settled on the twelve tracks that became Kev Beadle Private Collection Volume 2.

The twelve tracks on  Kev Beadle Private Collection Volume 2 are a mixture rarities and hidden gems. Each track oozes quality. Kev’s taste is impeccable as he introduces us to jazz from America, Brazil, Britain, Hungary and Sweden. Many of these tracks you won’t have heard before. That’s until now. You certainly won’t forget them in a hurry. Not given the quality of music that you’ll find on Kev Beadle Private Collection Volume 2, which is another journey into the world private pressings, with Kev Beadle as your musical guide. 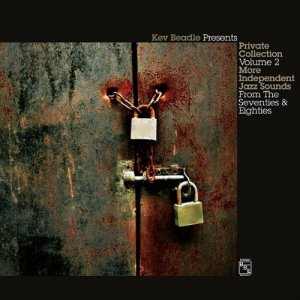