Before long, Brian found a copy of I Will Not Be Sad In This World. It had been released five years before, in 1983, by Melodiya, the Russian state owned record company. When Brian Eno first heard I Will Not Be Sad In This World he referred to the album as: “without doubt, one of the most beautiful and soulful recordings I have ever heard.” Coming from a musical luminary like Brian Eno, this was high praise indeed. Before long, Brian was championing the music of Armenian born duduk player, Djivan Gasparyan in the West.

When I Will Not Be Sad In This World was released in 1988, what should’ve been a joyous occasion, was tinged with sadness. A devastating earthquake had struck Armenia on 7th December 1988. The effects of the earthquake in Armenia were still being felt. Many people died and were left homeless. Djivan shared their pain and suffering. After all, Armenia was where Djivan Gasparyan was born on October 12th 1928.

Djivan first learnt to play the duduk when he was six. His father was an talented duduk player. So, it was only natural that Djivan became his apprentice. His father taught Djivan how to master the duduk. He taught his son well.

Djivan was a regular competitor at the UNESCO worldwide competitions. He won four medals in four separate decades. His first win came in 1959. Further wins came in 1962, 1973 and 1980. When he won his third medal in 1973, Djivan was awarded the honorary title of People’s Artist of Armenia. Then by the time he won his final UNESCO medal, Djivan was Professor at the Yervan Conservatoire. He’s held this position for over forty years. During this period, Djivan became one of Armenia’s most successful musical exports.

So, it’s no surprise that eventually, he was awarded the honorary title of People’s Artist of Armenia. Sixteen years later, Djivan Gasparyan’s music was about to be heard by the wider audience it deserved.

I Will Not Be Sad In This World.

On its release in 1989, I Will Not Be Sad In This World was dedicated to the victims and survivors of the Armenian earthquake. One of Armenia’s most talented son’s was helping to publicise the continuing plight of the Armenian people. He did this through his music.

I Will Not Be Sad In This World was released in 1989, to widespread critical acclaim. Worldwide, critics were won over. No wonder, given the quality of the music

Listening to I Will Not Be Sad In This World the seven tracks are variously ethereal, haunting, atmospheric and beautiful. The music might be minimalist, but it’s truly timeless. From opening bars of A Cool Wind Is Blowing, the music is captivating and haunting. Here, Djivan is accompanied by just Vachagan Avakian. His duduk drone is omnipresent, as Djivan’s duduk quivers and shivers, emotively.

Several tracks on I Will Not Be Sad In This World have a cinematic sound. This includes Brother Hunter and The Ploughman. Both tracks would perfect for cinematographers everywhere. Each song paints pictures in your mind eye. Especially the Eastern tinged The Ploughman. It conjures up pictures of hot nights under the Arabian sun. Surely, a filmmaker somewhere will discover this hidden gem. They have in the past. Djivan’s music has previously featured in The Gladiator and The Last Temptation of Christ.

Look Here My Dear sounds like a heartfelt plea. Its ethereal beauty is truly memorable. Little Flower Garden has a haunting and spiritual sound. Evocative and poignant describes Your Strong Mind. You find yourself shutting your eyes and letting the music wash over you. You wallow in its beauty, allowing it to cleanse your soul.

Earlier, I described I Will Not Be Sad In This World as ethereal, haunting, atmospheric and beautiful. That’s an understatement. The music is also atmospheric, cinematic and evocative. Djivan Gasparyan’s music is also minimalist and timeless. It benefits from eternal beauty. That’s not all. 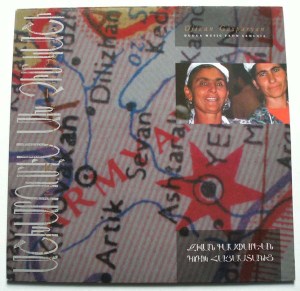 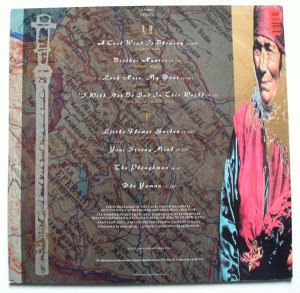 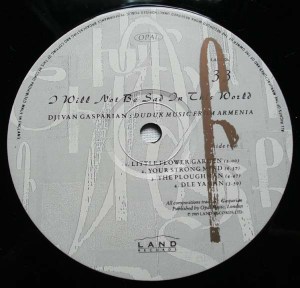 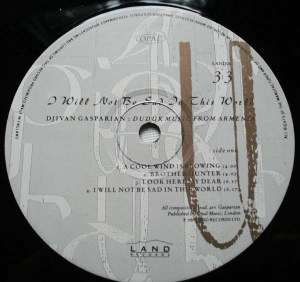 Sadly, despite the critical acclaim that followed the release of I Will Not Be Sad In This World, it took another four years before Djivan Gasparyan released his sophomore album Moon Shines At Night.

Eventually, Brian Eno managed to bring Djivan Gasparyan to London in 1993. Brian decided to bring onboard Michael Brook. He’d regularly worked with Brian Eno on the past. The Canadian guitarist and producer, Brian thought, would be the perfect collaborator for Djivan and his band.

Accompanying Djivan were a small band consisting of damkash player Vachagan Avakian plus Levon Arshukuna and E. Oganesyan. They arrived at Church Studios, London and started recording the album on a two-track recorder. It was recorded live. There were no overdubs. Even when Djivan sung for the first time on an album. This was on Mother Of Mine and the hugely poignant 7th December 1988 which refers to the Armenian earthquake. Djivan and his band were consummate professionals throughout the recording session. After just three just hours, what would become Moon Shines At Night was completed.

The hopeful sounding Lovely Spring opens Moon Shines At Night. Tenderly, Djivan caresses the duduk, coaxing beauty from its midst. This results in an almost mystical sound. Sayat Nova may have a slightly wistful sound. There’s a sense of loss and longing in the music. Despite that, beauty is omnipresent.

Very different is 7th December 1988, a song that deals with the tragic Armenian earthquake. It features a vocal from Djivan full of hurt, heartbreak and sadness. Memories come flooding back. People who died, and others who lost everything. His pain and hurt is almost tangible in what’s an outpouring of grief and loss.

Slowly the soul-searching Don’t Make Me Cry unfolds. It’s without doubt, one of the most beautiful songs on Moon Shines At Night. Djivan having been hurt before, can’t stand for it to happen again. So, he pleads Don’t Make Me Cry.

You Have To Come Back To Me floats hopefully along. There’s a sense of hope as you loose yourself within the music. It carries you along, taking taking you on a  journey where hope and joy are constant companions.

As Tonight unfolds, there’s an element of drama. The arrangement quivers and shimmers. It’s louder and much more powerful. There’s also a sense of melancholy and sadness. This continues on the wistful, but beautiful They Took My Love Away. A tale of love lost it’s a deeply moving track. Moon Shines At Night is best described as haunting and cinematic. One of the most beautiful tracks on Moon Shines At Night is Apricot Tree, a ten minute epic. From the get-go it’s a truly captivating and sometimes, haunting. You loose yourself in the track. It sweeps you along, revealing a shimmering, sometimes spiritual sound.

Mother Of Mine closes Moon Shines At Night. It features another heartfelt, emotive vocal from Djivan. His vocal takes centre-stage, as the drone sits subtly in the background. Meanwhile, Djivan’s vocal is akin to a window into his soul.

Ten years passed between the recording of I Will Not Be Sad In This World and Moon Shines At Night. During that period, Djivan Gasparyan had matured as a songwriter and musician. That’s not all. By the time he recorded Moon Shine Bright At Night, Djivan had discovered his voice. He proved to be a talented vocalist, who had the ability to breath life, meaning and emotion into lyrics. That’s apparent on the poignant 7th December 1988 and the heartfelt Mother Of Mine. Just like the rest of Moon Shines At Night these two tracks ooze quality. That’s the same as I Will Not Be Sad In This World which was recently rerelease.

I Will Not Be Sad In This World and Moon Shines At Night feature on a lovingly compiled double album of Djivan Gasparyan’s music, which was recently rereleased by All Saints Records. Both albums are a welcome reminder of a hugely talented musician, whose music belatedly, found the audience it deserved.

By the time Brian Eno’s record company, Opal/Land Records, rereleased Djivan Gasparyan’s debut album I Will Not Be Sad In This World in 1989, he was already sixty-one. He’d been playing the duruk

for fifty-five years. He was a master musician, who when a member of the Yerevan Philarmonic Orchestra, toured the world. However, it wasn’t until Brian Eno discovered Djivan Gasparyan that his music was heard by a wider audience. After that, many artists collaborated with Djivan Gasparyan.

This included everyone from Peter Gabriel, Sting, Brian May, Lionel Ritchie and Hans Zimmer. Djivan Gasparyan’s music has also featured in a number of films, including The Gladiator and The Last Temptation Of Christ. Belatedly, Djivan Gasparyan’s music found the wider audience it deserved. Hopefully, after the release of I Will Not Be Sad In This World and Moon Shines At Night, even more people will discover the delights of one of the man they call the “master of the duduk.” 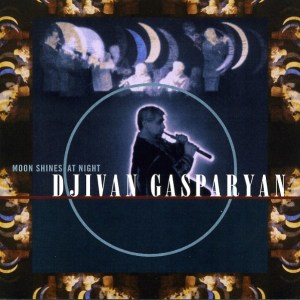 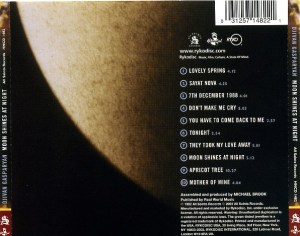 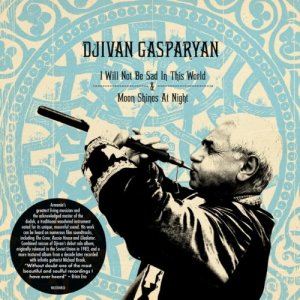 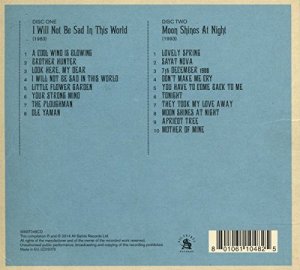