Their story begins back in Dallas in 1958. That’s when high school students Robert “Tex” Wrightsil and Charlie Moore decided to form their own band, The Stairs. Before long, there were a few changes in the lineup. Harold Thomas, David Sanders and Lee Jones would join The Stairs. Then in 1962, The Stairs became The Masqueraders. There was a reason for this.

The Stairs had established a reputation for being able to impersonate other groups. So, they decided that The Masqueraders was a much more fitting name. That was the name that featured on their debut single in 1963.

Following the release of Talk About A Woman, a DJ who was friendly with The Masqueraders advised them to move to Detroit. He believed The Masqueraders would’ve more chance of attracting the interest of record companies. Especially Stax and Motown, who were two of the biggest should labels. However, their success lead to many small labels being founded. It was to one of these labels The Masqueraders signed.

Tex Wrightsil, Charlie Moore and Dave Sanders had enough of Detroit. They wanted to return to Dallas. So they headed home. Lee Jones and Harold Thomas stayed in Detroit. By the end of 1967, Lee and Harold decided to head home.

Before that, The Masqueraders considered which label might suit their music best. The label they decided upon was Stax. Looking back, that was obvious. The Masqueraders weren’t a Motown group. Stax would’ve been the perfect home for The Masqueraders. Their music was suited to Stax in its sixties’ glory days. Sadly, Stax weren’t needing another male soul group. So, The Masqueraders and their manager Alvin Howard looked elsewhere.

This time, The Masqueraders caught a break. Producer Chips Moman had just opened his legendary American Studios. He was planning on  setting up his own label. It would be a one-stop shop. He’d record and release music. The Masqueraders would be one of the first groups to release a single on AGP Records. There was a problem. AGP Records wasn’t up and running.

During their sessions at American Studios, The Masqueraders recorded a number of tracks. The majority were released on AGP Records, which was a collaboration between Chip and Bell Records. This seemed a marriage made in musical heaven. Surely, The Masqueraders fortunes would change?

Before The Masqueraders released a single on AGP Records, they released This Heart Is Haunted and On The Other Side. For some reason, it was released as Lee Jones and The Sounds Of Soul. Even the change of name didn’t improve The Masqueraders’ fortunes. Things, however, were about to improve.

Bell Records decided that rather than release I Ain’t Got To Love Nobody Else on AGP Records, it would be release on Bell with an AGP logo. This proved a masterstroke. The single reached number seven in the US R&B Charts and number fifty-seven in the US Billboard 100. At last, The Masqueraders had made a commercial breakthrough. Things got even better when later in 1968, I’m Just An Average Guy reached the top thirty in the US R&B charts. That was as good as it got for The Masqueraders at AGP Records. None of their other singles charted and the label folded. For The Masqueraders this was a huge blow. So, they returned to Dallas.

This meant that Lee wasn’t around when The Masqueraders released two singles on their own label Stairway. The Masqueraders produced 1971s Let Me Show The World and 1972s The Truth Is Free. Neither single was a commercial success. Despite that, The Masqueraders signed to Hi Records, which was one of the most successful Southern Soul labels.

In 1974, Stax’s finances were in a perilous state. It’s no surprise that towards the end of 1975, Stax was declared bankrupt. One of soul’s legendary labels was no more. One of Stax’s biggest success stories was Isaac Hayes. He left Stax in 1974 and joined ABC Records. As an incentive, Isaac was given his own label, Hot Buttered Soul imprint.

Rather than record at Everybody Wanna Live On at one studio, the recording was split between ABC Recording Studios Los Angeles and Hot Buttered Soul Recording Studio in Memphis. Isaac Hayes had put tougher some of the best session players of the day. The Movement provided the rhythm section. This includes bassist Errol Thomas, guitarists Charles “Skip” Pitts and William “Boots” Vaughn and Willie Hall and Willie Cole on drums and tambourines. Sammy Watts played acoustic guitar, Jimmy “Congalou” Thompson congas and Isaac Hayes and Duke Hall played keyboards. Strings came courtesy of the Memphis Symphony Orchestra. Along with The Movement, the Memphis Symphony Orchestra supplied the horns. Lester Snell orchestrated six of the eight tracks. Duke Hall orchestrated (Call Me) The Traveling Man and Listen. Isaac Hayes arranged and produced Everybody Wanna Live On. Once Everybody Wanna Live On was completed, it was released in 1975.

On the release of Everybody Wanna Live On in 1975, it spent three weeks in the US R&B charts, peaking at number fifty-seven. Baby It’s You was the lead single, but stalled at number seventy-six in the US R&B charts. (Call Me) The Travelling Man was released in 1975 and reached number thirty-two in the US R&B charts. Your Sweet Love Is A Blessing was released as a single in 1976, but failed to chart. However, seventeen years after they were founded, The Masqueraders were enjoying the commercial success and critical acclaim their music deserved. You’ll realises why, when I tell you about The Masqueraders’ debut album Everybody Wanna Live.

Everybody Wanna Live On opens with the title-track. Against a stomping, 4/4 beat The Movement combine funk, soul and disco. They unleash funky guitars and pounding drums. This proves the perfect backdrop for a grizzled, joyous lead vocal from Sam Hutchins. Meanwhile, lush strings dance, horns growl and the the rhythm section get funky. The rest of The Masqueraders add soaring harmonies. A pounding piano and stabs of French horn are added as The Masqueraders strut their way through this delicious, dance-floor friendly anthem.

Please Don’t Try sees the tempo drop and braying horns join the rhythm section and piano in providing the backdrop for The Masqueraders. Sam’s lead vocal is an impassioned outpouring of emotion. He literally begs as he sings: “Please don’t take me away to the sky.” Accompanying the lead vocal are dramatic, heartfelt harmonies. All the time, horns bray and blaze as The Movement provide the heartbeat to this soul-baring ballad.

(Call Me) The Travelling Man has a much more understated arrangement. Just a lone Fender Rhodes sets the scene for a tender, wistful vocal. It’s rueful and accompanied by a ride and acoustic guitar. That’s until equally tender harmonies sweep in. Before long, horns rasp gently, strings quiver and the Fender Rhodes meanders across the arrangement. They combine with The Masqueraders  to create a beautiful, heartbreaking ballad that’s truly timeless.

Not for the first time, there’s a Philly Soul influence on Everybody Wanna Live On. It’s apparent from Listen, which The Masqueraders penned. There’s a nod to Vince Montana Jr, Thom Bell, Norman Harris and Gamble and Huff here. That’s the case from the get-go. Literally, the track bursts into life. Blazing horns and dancing strings sweep you away, as they unite with the rhythm section. This provides the perfect backdrop for The Masqueraders, who deliver one of their best vocals. It’s an inspired performance. Almost effortlessly, The Masqueraders drive each other to greater heights as they combine soul and social comment.

Baby It’s You is a cover of a Bacharach and David song. It was originally made famous by The Shirelles. Here, The Masqueraders drop the tempo and against an understated, laid-back backdrop deliver a sultry slice of soul. The vocal is tender, emotive and devoted. All the time, lush strings sweep, horns rasp and guitars chime. All the time, drums marks the time. Gradually, the arrangement unfolds and the vocal grows in power. It becomes a cathartic outpouring of emotion and hope.

Before long, the strings are dancing and The Movement power the arrangement to Sweet Sweetning along. Atop the arrangement sits the lead vocal. It’s accompanied harmonies and later, bursts of growling horns. Later, the vocal becomes a vamp as The Masqueraders trade uber soulful licks.

(My Love For You Is) Honest And True is quite different to much of Everybody Wanna Live On. A subtle, but funky guitar, pounding piano and bass drive the arrangement along. The vocal is akin to confessional. It’s accompanied by sweeping harmonies and later, rasping horns and sweeping strings. There’s even flourishes of Fender Rhodes as the arrangement reveals its secrets. At one point, jazz-tinged horns take the track in an unexpected direction. Mostly, the focus of your attention is on The Masqueraders, who put seventeen years experience to good use.

Your Sweet Love Is A Blessing closes Everybody Wanna Live On. It’s another ballad, which The Masqueraders excel at. Just the bass, Fender Rhodes and acoustic piano accompany a heartfelt, impassioned vocal. That’s until harmonies sweep in. They’re the perfect accompaniment to the vocal. It’s a case of yin and yang. Together, they play starring roles on this beautiful, romantic ballad. This proves the perfect way to close Everybody Wanna Live On.

After seventeen years of struggling, The Masqueraders finally got the chance to fulfil their undoubted potential. They had the occasional tantalising glimpse of commercial success. Sadly, if proved fleeting. Before long, The Masqueraders were back struggling. What it needed was a producer who understood them.

Chips Moman at AGP Records came close. So did Willie Mitchell at Hi Records. The man who finally brought out The Masqueraders’ potential was Isaac Hayes. He signed The Masqueraders to his newly formed Hot Buttered Soul Records. The Masqueraders went away and penned seven tracks. They also chose to cover of Bacharach and David’s Baby It’s You. When recording of Everybody Wanna Live On began, Isaac Hayes brought onboard Lester Snell, who orchestrated six of the eight tracks. Duke Hall orchestrated (Call Me) The Traveling Man and Listen. They played a huge part in the sound and succes of Everybody Wanna Live On, which was recently released on CD by Ace Records for the first time.

It was as if Isaac Hayes template for Everybody Wanna Live On was Philly Soul. He introduced swathes of the lushest strings and rasping horns. To this he added The Movement, one of the top rhythm sessions. They featured throughout Everybody Wanna Live On, which is a mixture of beautiful, romantic ballads and joyous dance tracks. It was as if The Masqueraders knew that this was their shot at the title.

Just like an ageing prize fighter, The Masqueraders knew that if Everybody Wanna Live On failed, then their career could be over. That was a sobering thought. So, they wrote some of the best songs of their career. Then when they entered the studio, they raised their game. The Masqueraders produced some of the best performances of their seventeen year career. They clutched victory from the jaws of defeat. Everybody Wanna Live On charted and so did two of the three singles. 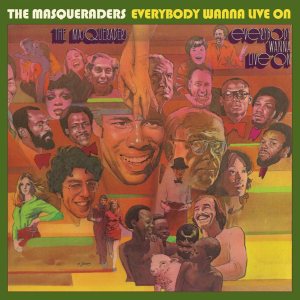 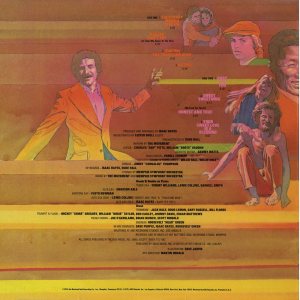 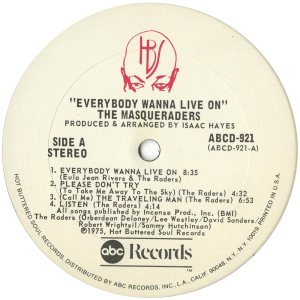