Having just released their fourth album Stand, Sly and The Family Stone took Woodstock by storm. Their early morning set on 17th August 1969, was one of the highlights of Woodstock. This further cemented their huge popularity. After Woodstock, CBS, their record company were desperate for a new album. No wonder. Sly and The Family Stone’s profile was at an all time high. Deadlines were set, and deadlines missed. It seemed Sly Stone and The Family Stone were  in no rush to release their fifth album.

For CBS, this was frustrating. They were desperate for a new album. Realising a new album wasn’t going to be imminent, a Greatest Hits album was released in 1970. Featuring three new songs, Greatest Hits reached number two in the US Billboard and number one in the US R&B Charts. Certified gold, Greatest Hits surpassed the success of Stand. Despite the three new songs, there was still no sign of album number five from Sly Stone and The Family Stone. That wasn’t a surprise.

Behind the scenes, chaos and controversy had surrounded one of the most flamboyant bandleaders of the sixties and the seventies, Sly Stone. There were tales of large scale drug usage. The drug use had worsened when Sly Stone and The Family Stone had relocated to California. PCP and cocaine were now the drugs of choice for the band. This started to affect the recoding schedule and tours. Sly’s moods changed One minute he was upbeat and happy, then suddenly he was moody. His behaviour started to become erratic. Between concerts, it was reported that he spent much of his time taking drugs. His infamous violin full of drugs which accompanied Sly Stone everywhere. Then there was Sly Stone’s involvement with y Stone, was his newfound relationship with The Black Panthers.

This was said to be affecting the band’s music. They wanted the band’s music to be more militant, both in style, lyrically and musically. The Black Panthers also felt that Sly and The Family Stone should reflect the movement’s beliefs. Even more controversial was that The Panthers wanted Sly to fire the two white instrumentalists Greg Errico and Jerry Martini. Their replacements, The Panthers said, should be black musicians. Their final request, was that manager David Kapralik be sacked. Replacing him, should be a black manager who would represent the group. Soon, politics were the least of Sly’s problems. Soon, Sly was involved with gangsters.

Adding to all these problems was Sly Stone’s decision to hire of gangsters to manage his affairs, protect him and source him drugs. Add to that band members leaving, and this was a tumultuous time for the band. So much so, that drummer Greg Errico decided to leave the band. That any music ever got made was a miracle. However, music Sly and The Family Stone recorded a career defining album.

By late 1969, Sly Stone was becoming disenchanted by the constant schedule of recording an album, then touring the album.  He’d been on this merry go round too long. Sly wanted to get off and return to production. Clive Davis at Columbia, who was desperate for Sly and The Family Stone to record their fifth album by February 1970, agreed.

When Sly started recording, at Columbia’s  New York and Los Angeles’ studios, it wasn’t for the new Sly and The Family Stone album. Instead, he was recording artists for his new Stone Power label. Sly was producing acts like Little Sister, Joe Hicks and 6IX for Stone Power Productions. For Clive Davis, this was a blow. However, at least Sly was in the studio. Maybe, this would inspire Sly to record Sly and The Family Stone’s fifth album?

This wasn’t the case. However, Sly Stone did record a number of tracks for Stone Power. This included Just Like a Baby and Africa, which would later, feature on Sly and The Family Stone’s 1971 Magnus Opus There’s A Riot Goin’ On. These two tracks, along with

The recording studio has always been perceived as Sly Stone’s natural habitat. It’s where Sly Stone spend long periods of time. This would be the case with There’s A Riot Goin’ On. During the lengthy recording sessions for There’s A Riot Goin’ On, Sly spent countless hours honing the album’s sound. This involved lengthy overdubbing sessions, which gave the album its multilayered sound. Sly it seems, was looking for perfection. Considering Sly’s seemingly chaotic life, this seems at odds with his image. However, this was the case with the recording sessions for Stone Power.

A total of eighteen tracks from  Joe Hicks, 6IX and Sly Stone feature on I’m Just Like You: Sly Stone’s Flower 1969-1970. Little Sister feature five times, Joe Hicks contributes three tracks and 6IX feature six times. The other four tracks are from Sly Stone, whose just billed as Sly. These eighteen tracks were recorded just before, and while, Sly and The Family Stone were recording their classic album There’s A Riot Goin’ On.

Little Sister contribute five tracks to I’m Just Like You: Sly Stone’s Flower 1969-1970. They were an American all-female vocal harmony group, who were the background vocalists for Sly and The Family Stone. Originally, Little Sister were a gospel music group called The Heavenly Tones. Their lineup included Mary McCreary, Elva Mouton and Vet Stewart, Sly’s sister. The first contribution from Little Sister is You’re The One (Part I and 2).

Somebody’s Watching You was Little Sister’s sophomore single. Again, there’s two versions of on I’m Just Like You: Sly Stone’s Flower 1969-1970. There’s the single version released in 1970. Little Sister’s gospel root shine through, on a track that’s soulful and subtly funky. The other version of Somebody’s Watching You is the Full Band Version. An added bonus is the B-Side Stanga is added. Its arrangement has Sly Stone’s name written all over it, as Little Sister add their soulful stirrings.

Although Sly Stone wrote and produced  Joe Hicks’ debut single Home Sweet Home – Part II, it was released on Scepter Records. It’s a driving fusion of funk and soul. There’s a nod to James Brown. Tucked away on the B-Side is I’m Goin’ Home, where Joe is transformed into the stomping soul man.  After the release of Home Sweet Home – Part II, Joe’s next single, was released on Stone Power.

6IX are remembered as a group of journeymen musicians, from northern California. They have worked as the Soul Rascals and recorded with  H.B. Barnum. They also opened for Sly and The Family Stone and backed Little Sister. That’s how Sly Stone encountered 6IX. He decided to transform their fortunes.

In 1969, 6IX recorded Trying to Make You Feel Good. Slow, sultry and dramatic, it features a vampish vocal and an arrangement that’s a fusion of funk, blues and rock. There’s another version of Trying to Make You Feel Good. It’s billed as the Full Band Version. Another contribution from 6IX is the You Can, We Can. It’s a real fusion of influences. There’s blues, rock and soul. Sometimes, there’s even a nod to Cream, on this hidden gem.

I’m Just Like You was 6IX’s debut single. Released in December 1970, it’s features a funky vocal, delivered against an arrangement that’s variously funky, lo-fi and bluesy. Dynamite, the B-Side is a fusion of soul, funk and blues reminiscent of Sly and The Family Stone. There’s a second version of Dynamite, the alternate version. Personally, I feel the versions on the B-Side of I’m Just Like You is the best of the two versions.

The other four tracks on I’m Just Like You: Sly Stone’s Flower 1969-1970, are from Sly Stone. Just Like a Baby and Africa were recorded in 1970, are the merest of hint of what Sly and The Family’s next album There’s A Riot Goin’ On, was heading. Africa is an eight minute, epic jam.  Spirit another Sly’s contributions, has a lo-fi funky sound. Scared never rises above mediocre. It’s a jam between a Hammond organ and synthetic drums. As a result, it’s a pretty soulless track, that sounds either like work in progress or a demo.

When Sly Stone was writing and producing the music on I’m Just Like You: Sly Stone’s Flower 1969-1970, he was up against insurmountable odds. He overcame the influence of drugs, gangsters and The Black Panthers. Somehow, Sly dug deep and recorded not just the greatest album of Sly and The Family Stone’s career, There’s A Riot Goin’ On, but worked with Little Sister, Joe Hicks and 6IX.  He also recorded a quartet of tracks as a solo artist. This included Just Like a Baby and Africa. They were the merest of hint of the direction Sly and The Family Stone’s next album There’s A Riot Goin’ On, was heading. However, not all the tracks on I’m Just Like You: Sly Stone’s Flower 1969-1970 reach the same heights.

They’re a mixture of singles, alternate tracks, B-Sides and unreleased tracks. Some of the tracks are an interesting reminder of Sly Stone during one of the most productive periods of his career. After all, Sly and The Family Stone had just released Stand and were working on There’s A Riot Goin’ On. However, Sly at Stone Power, was limited with the artists and equipment he had to work with.

Much of the music on I’m Just Like You: Sly Stone’s Flower 1969-1970 almost has a lo-fi sound. There’s no lavish arrangements. Instead, this is music made on a budget. Sadly, the sound quality isn’t great. As for the music, Little Sister were and Joe Hicks were talented. 6IX had their limitations. They’re described as journeymen musicians. That’s unfair, as 6IX aren’t without talent. A group capable of creating genre-melting music, they were hindered by the low budget recordings. Who knows what they might have achieved with a bigger budget. Ironically, one of the poorest tracks on I’m Just Like You: Sly Stone’s Flower 1969-1970 is Scared, which after one listen, you’ll be Scared to play again. It’s far from vintage Sly Stone. 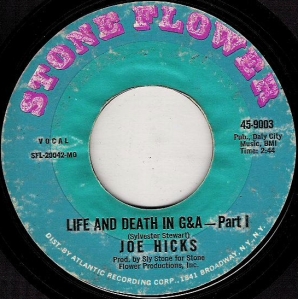