For many musicians who were once part of one of the most successful bands in musical history, the day that band breaks up is one of the worst days in their life. That day, can mark the end of their career. Try as they may, they never reach the same heights as a solo artist. Musical history is littered with examples of artists who never reached the same giddy heights. This includes former members of The Beatles, Rolling Stones, Pink Floyd and Led Zeppelin. However, this doesn’t include Robert Plant.

Since the break of Led Zeppelin in 1980, Robert Plant has forged a career as a solo artist. His debut albums released was 1982s Pictures At Eleven. It was certified silver in Britain and platinum in America. This was the start of the commercial success and critical acclaim that’s come Robert Plant’s way.

After Pictures At Eleven, Robert Plant has released a further eight albums between 1983s The Principle of Moments and 2010s Band Of Joy. These eight albums have resulted in silver, gold and platinum discs coming Robert’s way. In  Britain, Robert has received two silver and two gold discs. However, stateside, Robert Plant, just like Led Zeppelin, before him, took America by storm.

For Robert Plant, he’s always enjoyed more commercial success in America. It’s like Robert’s spiritual home. In America, 1985s Shaken ‘n’ Stirred, 1990s Manic Nirvana and 1995s Fate of Nations were certified gold and 1983s The Principle of Moments was certified platinum. However, Robert’s most successful album in America was 1988s Now and Zen. It sold over three million copies and was was certified triple platinum in America. For Robert Plant, this proved yet again, that there was life after Led Zeppelin.

However, four years have passed since Robert Plant last released a solo album. That was 2010s Band Of Joy. This was Robert’s third consecutive album not to receive a glittering prize in the land of the free. Robert, however, hadn’t lost his Midas touch.

No. He’d collaborated with Alison Krauss on her 2007 album Raising Sand. This was Robert’s first appearance since he released Mighty ReArranger in 2005. It was certified silver in Britain. However, Raising Sand was certified platinum in America, Britain and Canada. Robert Plant was back, and he what’s more, he hadn’t lost his Midas touch. Now seven years after Raising Sun, Robert Plant returns with his tenth solo album, Lullaby and…The Ceaseless Roar, which was recently released on Nonesuch Records. Lullaby and…The Ceaseless Roar is Robert’s first album since 2010. Hopefully, he’ll still have the Midas touch.

There are eleven tracks on Lullaby and…The Ceaseless Roar. Each of the tracks are collaborations between Robert and members of The Sensational Space Shifters. They arranged the traditional song Little Maggie and cowrote ten new songs.

Opening Lullaby and…The Ceaseless Roar is a new version of the traditional song, Little Maggie. It’s rearranged by Robert and The Sensational Space Shifters. Just a banjo, buzzing bass, pounding drums and percussion create the backdrop for Robert’s tender, impassioned vocal. Behind him, the pulsating arrangement is a fusion of musical genres. Blues, country, folk, electronica and world music melt into. Later, the track takes a Celtic twist, as flutes enter. That’s the signal for Robert’s vocal and the arrangement to grow in power. After that, the arrangement reaches a glorious, genre-melting high.

Thunderous drums pound on Rainbow. Deliberate driving guitars and the bass join. They’re the perfect backdrop for Robert’s vocal. It’s heartfelt and restrained. Meanwhile, the arrangement oozes drama. You wonder when Robert and The Sensational Space Shifters are going to kick loose? This never happens. Instead, understated, cooing harmonies and then crystalline guitars accompany Robert, as he rolls back the years.

Pocketful of Golden is another track where musical genres and influences melt into one. Elements of electronica, folk, rock and world music can be heard.  Robert’s vocal is understated and melancholy. He’s thoughtful, as guitars are unleashed. They join drums and washes of synths in creating a captivating post rock backdrop for Robert’s vocal. He doesn’t just sing the lyrics, he sounds as if he’s lived them, as he breathes life, meaning and emotion into the lyrics.

Washes of wistful synths open Embrace Another Fall. They’re joined by a picked guitar and bursts of thunderous drums. Then when Robert’s vocal enters, it’s a mixture of drama, hope and passion. His soul has been awakened, rescued from its slumbers by his lover. Behind him, bursts of searing guitars, swells of synths and pounding, pulsating drums combine. Then it’s all change. Blistering, screeching guitars are unleashed. It’s akin to Led Zeppelin in their pomp. All too soon, it’s all over. However, replacing it is the ethereal beauty of Julie Murphy’s vocal. It’s carried atop a wistful meandering arrangement where drama and beauty sit side-by-side.

Turn It Up has a crackly, bluesy backdrop. A riff is repeated while Robert’s vocal is restrained and lived-in vocal. He name checks blues legend Charlie Patton, all the time, threatening to cut loose. In doesn’t happen. Instead, searing, blistering guitars kick loose. They’re part of an rocky arrangement that’s a mixture of drama and space. Robert’s vampish vocal and a searing, blistering guitar riff play leading roles on a track full of social comment about 21st Century America.

A Stolen Kiss is very different to previous tracks. It’s an understated ballad. Just a hesitant piano, bass and Robert’s melancholy vocal combine. Hurt and longing fill his voice, as he “watches the days slip away.” A guitar weeps and is part of a subtle, but atmospheric arrangement. Along with Robert’s soul searching vocal, it’s without doubt, one of the highlights of Lullaby and…The Ceaseless Roar.

Somebody There sounds as if it’s paying homage to Robert’s glorious rocky past. Swathes of jangling, blistering guitars and pounding, mesmeric drums set the scene for Robert. When his vocal enters, the rest of the band take care not to overpower Robert’s vocal. They play around his vocal, adding a folk rock backdrop. All the time, they allow Robert’s thoughtful, pensive vocal to take centre-stage. Robert fondly remember times gone by, and delivers a stirring vocal against The Sensational Space Shifters’ folk rock backdrop.

Swells of synths open House of Love, before a searing guitar signals the rest of the rhythm section to kick loose. The drums are bold and loud. This sets the tone for the rest of the rhythm section. Scorching, blistering guitars are unleashed while the bass underpins the arrangement. Robert’s vocal is understated and compelling. Again, he rolls back the years. His lived-in, all-knowing vocal is perfect for the lyrics. They come to life. Then when his vocal drops out, The Sensational Space Shifters showcase their considerable talents. Later, Robert’s whispery vocal rejoins and proves yin to The Sensational Space Shifters’ yang.

Mysterious and atmospheric describes the introduction to Up on the Hollow Hill (Understanding Arthur). Guitars weep, reverberating into the distance. Then the rhythm section march the arrangement along. Searing, grinding guitars provide the accompaniment to Robert’s breathy, dramatic vocal. It adds to the mysterious, atmospheric sound of this classy rocky soundscape.

After four years away, Robert Plant recently returned with his tenth solo album Lullaby and…The Ceaseless Roar. It was released on Nonesuch Records, an imprint of Warner Bros. Lullaby and…The Ceaseless Roar was released to widespread critical acclaim. He was accompanied by his backing band The Sensational Space Shifters. They played their part in a genre-melting album.

Everything from Americana, blues, country, electronica, folk, folk-rock, rock and world music can be heard on Lullaby and…The Ceaseless Roar. It’s a truly eclectic album that oozes quality from the opening bars of Little Maggie, right through to the closing notes of Arbaden (Maggie’s Babby). It’s a truly captivating album, one where Robert Plant pays homage to his musical past.

On Lullaby and…The Ceaseless Roar, Robert Plant relives his former glories. There’s a nod to Robert’s musical past, in the shape of blues, folk rock and rock. This is reminiscent of Led Zeppelin, as their music evolved. However, Robert combines other genres with rock. This includes electronica. Sometimes, washes of synths provide the backdrop to blistering guitars. It seems that, despite have just turned sixty-six, Robert Plant isn’t resting on his laurels.

He could easily do this. If Robert was to remake an album of seventies rock, it would find an audience. However, that wouldn’t be a challenge. So Robert has surrounded himself with a band of young, talented and innovative musicians

With their eclectic selection of instruments and an innovative way of working, Robert Plant, aided and abetted by The Sensational Space Shifters, played their part in a return to form from Robert Plant. Thirty-two years after the release of his debut solo album Pictures At Eleven, Robert Plant proves he’s still got the Midas touch on the genre-melting Lullaby and…The Ceaseless Roar, where the former Led Zeppelin frontman becomes a musical shapeshifter. 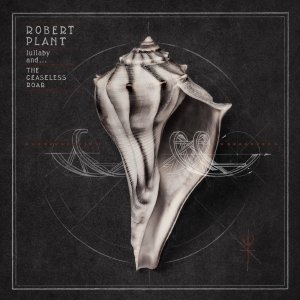