Back in 1976, musical maverick, Craig Peyton, was an up-and-coming musician, songwriter, arranger and producer. His latest musical vehicle was Band X, which he founded with Alan Grzyb, Victor Preston and Joey Bellomo. However, originally, Craig was a jazz drummer and vibraphonist. Then when synths started making inroads into music, Craig was one of the first musicians to realise their potential. So he bought a Fairlight and started experimenting with it. Before long, Craig had “tamed” the Fairlight, and was incorporating it into his music. This was the start of Craig’s interest interest in synths.

By 1976, Band X, with Craig at the helm, had established a reputation as an innovative group. They seamlessly married disparate musical genres. Their music was influenced by fusion, especially groups like Weather Report, Headhunters and Stone Alliance. However, Band X were determined to take fusion in a very different direction. So, they incorporated synths into the traditional fusion sound. The result was The Best of Band X, a genre-melting album of experimental and pioneering music, which was rereleased  by BBE Music in November 2014. Originally, however, The Best Of Band X was released in 1976.

For their debut album, The Best of Band X, Band X had written seven songs. Craig wrote Afterthought, Home and Black-Hole. Victor Preston penned Trullion Alastor 2262 and cowrote Rip Van Winkle with Alan Grzyb. He contributed Red Cloud and Picking Mushrooms With Rabbit. These seven tracks would become The Best of Band X, which was recorded at Longview Farms.

Recording of The Best of Band X took place at Longview Farms on the 2nd, 3rd and 4th April 1976. Band X didn’t employ a producer. Instead, Band X produced The Best of Band X, which they recorded over three days

Rip Van Winkle opens The Best Of Band X. A probing bass, hissing hi-hats and floaty vibes are joined by a clarinet. Meanwhile, the rhythm section create a pulsating heartbeat. Briefly, they create a laid-back jazzy sound. That’s until Band X up the ante. A surge of power and drama grabs your attention. After that, Band X toy and tease you. They veer between the understated, laid-back sound and a much more dramatic, powerful sound. What’s apparent, is that the four members of Band X are talented musicians. Especially, reeds-man Alan Grzyb, who produces a virtuoso performance on this progressive, genre-melting track.

Straight away, there’s an element of drama and tension as Red Cloud unfolds. Strings, keyboards and rolls of drums set the scene. Stabs of keyboards, vibes and bursts of drums combine drama and tension. Having set the scene, a clarinet floats across the arrangement. It adds a sound that veers between wistful, hopeful joyous. As for the track, it’s a combination of influences. Elements of everything from classical, jazz, library music and briefly, rock can be heard on this cinematic sounding track.

Just a subtle vibes solo opens Trullion Alastor 2262. It’s joined by a melancholy clarinet, while the rhythm section ensure the arrangement glides and floats along. The focus of your attention are the vibes and the pastoral sounding horn. They take the track in the direction of prog-rock, modern classical and jazz. Again, there’s even a nod to library music on what’s a beautiful, dreamy, laid-back, wistful sounding track.

Trippy. That describes the introduction to Afterthought. After that, Afterthought reminds me of the Shuggie Otis. It has a similar psychedelic, blue-eyed soul sound. Mostly, that’s down to Craig’s vocal. It’s accompanied by a funky, bubbling bass, space-age synths, searing, rocky guitars and vibes. This results in an arrangement that’s a myriad of influences. Art-rock, jazz, prog-rock, psychedelia, rock and space funk. Add to this a healthy twist of lysergic free jazz and Craig’s blue-eyed soul vocal, and the result is Band X at their innovative, genre-melting best.

Just the wistful sound of a bassoon and vibes open Picking Mushrooms With Rabbit. Straight away, there’s an obvious classical influence. This being Band X, anything could happen. It does. Abrupt, choppy keyboards and bursts of horn join percussion and the vibes. They add a retro jazzy twist. Then it’s all change, as Band X take a diversion via military music. After that, Band X take another detour via fusion. There’s even nods to space funk and rock, on this magical, lysergic mystery tour, that’s a result of Band X Picking Mushrooms With Rabbit.

No two tracks on The Best Of Band X are the same. That’s obvious from the opening bars of Home. It’s a beautiful, heartfelt slice of blue-eyed soul. Key to its success is Craig’s soul-searching vocal. He’s accompanied by an understated arrangement. While the rhythm section create the heartbeat, a clarinet and vibes combine. They take care not overpower Craig’s vocal. Just like the backing vocals, they compliment what’s Craig’s best vocal on this beautiful, heartfelt slice of blue-eyed soul.

Black Hole closes The Best Of Band X. It has a dark, dramatic sound. That’s down to the bass and synths. They’re joined by subtle hi-hats and understated vibes. Soon, a growling horn makes its presence felt. A searing guitar is the latest addition, as gradually, the drama builds and grows. Eventually, the bass adds a funky twist and Band X kick loose. Briefly, elements of funk and fusion can be heard. Then  Band X change tack. The spacious, futuristic arrangement slows down, heading in the direction of free jazz. This allows Band X to show yet another side to their music. It’s a welcome diversion. They’re true musical chameleons, who seamlessly veer between funkateers and free jazz pioneers in the space of nine minutes.

Although The Best Of Band X features only seven songs, and is thirty-eight minutes long, it’s a true hidden gem. For far too long, very few people were aware of the existence of this innovative, genre-melting album. There’s a reason for this.

Then some persistent and dedicated crate-diggers discovered The Best Of Band X. They realised that here was an album of groundbreaking, genre-melting music. The Best of Band X was essentially, a trip through musical genres. Everything from art-rock, blue-eyed soul, classical, funk, fusion, library music, prog-rock, psychedelia, rock and space-funk can be heard on The Best Of Band X. It’s best described as an ambitious and innovative album, where musical genres and influences melt into one.

It’s difficult to compare Band X to other artists, as their sound is quite unique. There are no real comparisons. Some people have compared Band X to Shuggie Otis and Steely Dan. However, only briefly do these comparisons shine through. Similarly, there’s a nod to Sun Ra on Black Hole. Mostly, though, Band X’s music was unique. That may have been part of the problem.

So unique was Band X’s music, that The Best Of Band X was way ahead of the musical curve. Even if it had been released on a major label, it might still have struggled. After all, it was too progressive an album for 1976. Record buyers were more interested in disco, than innovative, ambitious music. Coupled with the fact that The Best Of Band X was a private pressing, the album didn’t stand a chance. 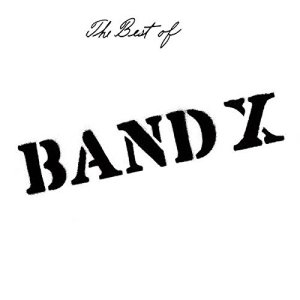