2014 is almost over. So it’s that time again, time for me to choose my fifty best reissues of 2014. To do that, I’ve listened to a mountain of music. Eventually, I came up with fifty albums. Here they are.

With the perfect environment for creating groundbreaking music, Gato Barbieri released The Third World. With his all-star band, Gato combined the energy of free jazz and his Latin heritage. This may have been an unlikely pairing, but one that worked. The Third World was critically acclaimed. Critics hailed Gato as one of the most ambitious and inventive musicians. Others described his as a creative maverick. No wonder. His playing style was unique, fierce, blazing and dramatic. Playing with his inimitable style, this musical maverick and rebel got results. Proof of this is The Third World, where maverick jazzman Gato Barbieri musical comes alive. Gato plays as if his very life depended upon it. Playing with power, passion and emotion, The Third World, a rhythmic free jazz epic that launched the most successful, productive and innovative period of the career of a true jazz maverick, Gato Barbieri. 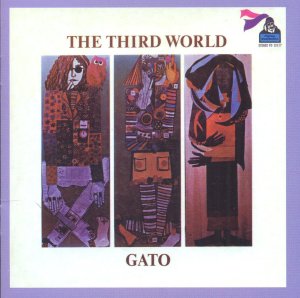 Hal Bradbury’s This Is Love is, without doubt, one of the rarest Hawaiian records of all time. Indeed, it’s one of the rarest record per se. For many crate diggers, a copy of This Is Love is the Holy Grail. They lust over the thought of unearthing a copy. However, they’d need deep pockets. Really deep. Either that, or a friendly bank manager. Not any more. BBE Music rereleased This Is Love earlier this year. At last, what’s been described as: “a masterpiece of Modern Soul and AOR” is within the budget of everyone.

Now over thirty years after the release of This Is Love has been reappraised and is perceived as “a masterpiece of Modern Soul and AOR.” That’s why This Is Love became the Holy Grail for record collectors. Just like Robert Johnson, record collectors were willing to do a deal with devil, to find a copy of This Is Love. Now that’s no longer the case. At last, this legendary meeting of the Laurel Canyon sound and soul is available for all to hear. Finally, This Is Love will be heard by the wider audience that it so richly deserves. Hopefully and belatedly, Hal Bradbury’s debut album This Is Love will received the plaudits and critical acclaim it deserves.

Just seven months after Black Sabbath released their eponymous debut album in February 1970, they were back with the album that defined their career, Paranoid. It was released in September 1970 and features three Black Sabbath classics Paranoid, Iron Man and War Pigs. They’ve since become staples of Black Sabbath’s live performances. They’re also three reasons why Paranoid sold twelve-million copies.

Although Paranoid wan’t released to the critical acclaim that accompanies many classic albums, it’s gone on to become one of the most important albums in the history of heavy metal. It redefined heavy metal. So much so, that Paranoid became the blueprint for the genre. If someone asked what heavy metal sounded like, Paranoid was the album to play them. Indeed, in the history of heavy metal, there are only two periods, Before Paranoid and After Paranoid. That’s why Paranoid is remembered as a groundbreaking release, where Black Sabbath rewrote the rules of heavy metal with what was the most successful and most innovative album of their long and illustrious career. 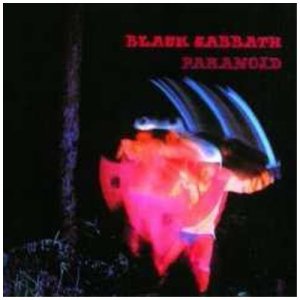 BREAKAWAY-BREAKAWAY AND STRAIGHT TO THE TOP.

Earlier this year, two of the rarest albums made their CD debut. This was Breakaway’s first two albums, 1977s Breakaway with 1978s Straight To The Top. They were released by BBE Music and belatedly, what are rare and prized assets amongst record collectors, are within the budget of most music fans. The release of these two albums on CD may ave been a long time coming, but it’s been well worth the wait.

On Breakaway, there’s everything from blue eyed soul, country, disco, funk, R&B, rock and soul. It was a real fusion of influences and genres. Straight To The Top was essentially, an album where blue eyed soul, disco, funk, rock and soul combined. Breakaway were at their best on the dance tracks and ballads. Indeed, Kathy comes alive during the ballads. Good as she is on the other tracks, she’s transformed during the ballads. She’s very much Breakaway’s secret weapon. Meanwhile the rest of Breakaway provided the backdrop for her vocals on Breakaway and then Straight To The Top, Kathy veered between diva to soul-baring balladeer. They were a perfect match. Sadly, commercial success eluded Breakaway, and in 1980, they split-up. A glrtrious reminder of what might have been are their two albums Breakaway with Straight To The Top, which thankfully, are now available on CD for the first time.

JACKSON BROWNE-LATE FOR THE SKY.

On its release, in September 1973, Late For The Sky reached number fourteen in the US Billboard 200. This was his highest chart placing and resulted in Jackson’s third consecutive gold disc. Things were about to get even better in 1975. When the nominations for the Grammy Awards were announced in 1975,  Late For The Sky was nominated. That’s not a surprise. Jackson’s lyrics were soul-baring, personal, insightful, cerebral, wistful and beautiful. Late For The Sky was like a window into Jackson Browne’s soul. Subjects like love, loss, identity and even apocalypse. There were similarities with Jackson’s eponymous debut album. However, Jackson decided to examine the subjects further. He did these subjects justice, with some of the best songs of his three album career. That’s why Late For The Sky was nominated for a Grammy Award in 1975 and is one of Jackson Browne’s greatest albums.

Looking back at Bob Frank with the benefit of hindsight, there’s several reasons why the album wasn’t a commercial success. The main reason was it’s the wrong album at the wrong time. He was a singer, songwriter and musician who wrote the twelve songs on Bob Frank. Not only that, but Bob produced his debut album Bob Franks. The only problem was, that Bob Franks was an album that was realised too late. Folk, country and blues music wasn’t as popular. That’s what Bob Frank contains. Then there was the fact that neither Bob nor Vanguard promoted the album. This all stems to the launch party. At Bob Frank’s release party, Bob wasn’t happy. Rather than play songs from his album, he played a bunch of new songs. They reflected his new lifestyle. That Bob wasn’t playing his new songs, didn’t please the executives from Vanguard. When Maynard Solomon asked Bob to play songs from his new album, Bob suggested that they:  “buy the f***ing album.” That was the last Bob heard from Vanguard. After that, Bob Frank sank without trace. Thankfully, forty-two years later, and Bob Frank, one of music’s best kept secrets, is finding the audience it so richly deserves.

Music has many unsung heroes. This includes the Brothers and Sisters, whose debut album was reissued by Light In The Attic Records. Brothers and Sisters featured some of the L.A’s top session players. In total, twenty-seven session singers appeared on Dylan’s Gospel. Among them are Merry Clayton, Ruby Johnson, Shirley Matthews, Clydie King, Patrice Holloway, Julia Tillman. So too did Edna Wright of The Honeycones and Gloria Jones. They were part of an all-star lineup that transformed ten Bob Dylan songs at Sound Recorders Studios.

Sadly, when Dylan’s Gospel was released on Ode Records, in 1969, it wasn’t a commercial success. There was absolutely nothing wrong with the music. It oozes quality. Maybe the problem was that Lou Adler signed the Brothers and Sisters to the wrong label. Ode Records was too small and didn’t have the funds and personnel to promote Dylan’s Gospel. A major label like Columbia Records or A&M would. If either of these labels had released Dylan’s Gospel, it would’ve been a huge commercial success and the album would’ve been hailed an innovative modern classic. Sadly, that wasn’t to be. Instead, Dylan’s Gospel hasn’t been released since 1969. Thankfully, Light Of The Attic Records rereleased Dylan’s Gospel, and belatedly, a new generation will hear some of the finest Bob Dylan covers ever recorded.

Often, it looks as if a singer is destined for greatness. That was the case with Canadian singer-songwriter Bob Carpenter. He was signed to Warner Brothers in 1974. Straight away, Bob headed into the studio to complete his solo album, Silent Passage. This didn’t take long, asBob Carpenter had already recorded some of the ten songs he’d written for Silent Passage. He’d been working on Bob Carpenter since 1971. It was meant to be the start of a glorious career. Many people forecast that Silent Passage would be the start of a glorious career for Bob Carpenter. This included many within the music industry. Sadly, this wasn’t to be.

Bob Carpenter never enjoyed the commercial success and critical acclaim he deserved. A contract dispute saw to that. As a result, he turned his back on music. That’s a great shame. Silent Passage is flawless. Bob Carpenter was a hugely talented singer-songwriter. Sadly, his career was over before it had started. However, forty-two years after completing Silent Passage it was rereleased by No Quarter Records, on 19th August 2014. At last, this lost classic Silent Passage, will be discovered by a new generation of music lovers. Hopefully each and every one of them will cherish Bob Carpenter’s one and only album, the flawless Silent Passage.

Nine years after releasing his debut album Rainmaker, on Harvest Records, Michael Chapman released Playing Guitar The Easy Way which was released on CD for the first time by Light In The Attic Records. This is no ordinary reissue. Far from it. It’s a no expense spared reissue. Light In The Attic have faithfully recreated the sleeve-notes. They’ve also taken Michael Chapman’s own tapes and remastered them at 24bit/96kHz. All this results in what’s best described as a luxurious and lovingly compiled reissue of Playing Guitar The Easy Way. It’s very different to Michael’s previous albums.

Michael Chapman’s eleventh album, Playing Guitar the Easy Way, was very different to his previous albums. Playing Guitar the Easy Way was an album made up entirely of instrumentals. This proves the perfect showcase for Michael Chapman. After all, he’s without doubt, one of the best guitarists of his generations. That’s apparent from the first time you hear Playing Guitar the Easy Way. You’re spellbound by Michael’s playing. His hands fly up and down the fretboards. He draws inspirations from blues, country and western, country blues, folk and rock. Michael’s just as happy playing acoustic guitar as he is unleashing some slide guitar. In his hands, a guitar comes alive. Michael has the ability to make a guitar come to life. It sings. The music he creates veers between bluesy, hopeful, joyous, melancholy, thoughtful, uplifting and wistful. Other times, it’s beautiful and ethereal. Despite the undoubted quality of Michael Chapman’s music, he’s still one of British music’s best kept secrets.

Forty years ago, Crosby, Stills, Nash and Young put aside their differences, and headed out on tour. During that tour, ten concerts were recorded. They would become the live album 1974. 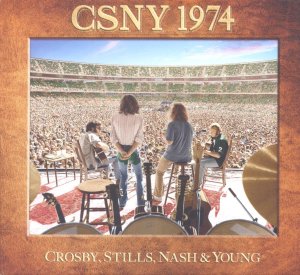