The story of The Valentinos began back in 1952, in Cleveland, Ohio. That’s when the Reverend Friendly Womack first heard his five sons sing. Before long, Friendly, Curtis, Bobby, Harry and Cecil had adopted the moniker The Womack Brothers. They then made their debut in their father’s church in the East 85th and Quincy district of Cleveland. A years later, in 1953, The Womack Brothers met a man who would help launch their career, Sam Cooke.

By 1953, Friendly Womack Jr, who sung bass, was twelve, while ten year old Curtis and Bobby aged nine, sang lead. Harry, who was only eight, was first tenor, and later, would play bass. Cecil who at aged six, was the youngest Womack Brother, sang baritone. He and the rest of the Womack Brothers modelled themselves on The Swan Silvertones, The Swanee Quintet and of course, The Soul Stirrers, who were lead by Sam Cooke. He was a huge influence on The Womack Brothers’ nascent career. So, Friendly Womack decided to take his sons to see Sam Cooke.

Roscoe Robinson, who sung second lead with The Blind Boys, was working with The Womack Brothers. He chauffeured them from concert to concert. One night, The Womack Brothers told Roscoe what they were looking to sign to a record label, but so far, were having no luck. That’s when Roscoe mentioned that Sam Cooke had just founded his own record label, SAR Records. He said would speak to Sam Cooke.

The answer was staring him in the face. What The Womack Brothers had to do, was turn their back on gospel music. This wouldn’t please many people.

On 28th February 1962, the day The Womack Brothers crossed over, and became The Valentinos, they entered the recording studio, and recorded two songs. This included their debut, secular single Lookin’ For A Love. It’s a stonewall classic, that would four months later, would launch The Valentinos’ solo career. On the flip side was the often overlooked Somewhere There’s A Girl, a beautiful heartfelt paean, full of longing. Just under four months later, Lookin’ For A Love was released as a single.

On the release of Lookin’ For A Love, in June 1962, it reached number seventy two in the US Billboard 100 and number eight in the US R&B charts. Lookin’ For A Love would become, without doubt, The Valentinos’ best known song. It would later, be rerecorded by Bobby Womack, and become one of his best known songs. That was still to come. Before that, The Valentinos looked like they were on their way to becoming one of the top soul groups of the early sixties.

I’ll Make It Right was released as The Valentinos’ sophomore single in January 1963. On the B-Side was the tender, pleading ballad, Darling, Come Back Home. Both tracks were penned by Curtis Womack, who was flourishing as a songwriter. Bobby, meanwhile, was flourishing as a singer. He delivers a gravelly, vampish vocal on I’ll Make It Right, which stalled at just number ninety-seven in the US Billboard 100. For The Valentinos, this was something of a disappointment. This was the last that was heard of The Valentinos until July 1963.

Away from the recording studio, The Valentinos were a successful live band. They were, at one point, earning $1,500 a week. The only rub was, that The Valentinos had to play five concerts a day. So a million selling single would prove more profitable. Sadly, that wasn’t to be.

The John Greek penned Baby, Lots Of Luck was released as a single in August or September 1963, with She’s So Good To Me on the B-Side. Despite being one The Valentinos’ finest and smoothest singles, it failed to chart. Neither did Bitter Dreams, The Valentino’s fifth single. It was the perfect showcase for a blistering vocal powerhouse from Bobby Womack. This was a tantalising taste of what Bobby was capable of. Sadly, very few people heard Bitter Dreams. Sam Cooke must have been having nightmares.

Another six months passed before The Valentinos returned to the recording studio. On March 24th 1964. That day, The Valentinos recorded five tracks. By then, Bobby Womack had become The Valentinos principal songwriter. He wrote I’ve Got Love For You and Don’t Go Away. Bobby cowrote It’s All Over Now with Shirley Womack. His other contribution was Rock In The Cradle Of Love, which he penned with Zelda Samuels. The other two tracks recorded that day, were Sam Cooke’s Sugar Dumpling and Tired Of Living In The Country, which featured Johnnie Morisette on deep bass vocal. Only two of these tracks were ever released by The Valentinos.

At RCA Studios, The Valentinos recorded Everybody Wants To Fall In Love, Put Me Down Easy, To Show My Love and Shakin’ This Way And That (Lassie). This would be The Valentinos’ final recording session for SAR Records. Things were about to take an unexpected twist.

Everybody Wants To Fall In Love proved to be the final single The Valentinos released on SAR Records. It failed to chart. Sadly, there was no followup and Put Me Down Easy, To Show My Love and Shakin’ This Way And That (Lassie) remained unreleased until the release of Lookin’ For A Love-The Complete SAR Recordings. That might have different, if not for the events of December 11th 1964.

That night, Sam Cooke died on 11th December 1964 aged just thirty-three. Police reports state that Sam Cooke booked into the Hacienda Motel, Los Angeles earlier on the 11th December 1964. Later, things went awry. Sam Cooke burst into the manager’s office-apartment in a rage, wearing nothing but one shoe and a sports jacket. A furious Sam Cooke, wanted to know where the woman who accompanied him into the Hacienda Motel was. Feeling threatened, Bertha Franklin, the motel manager, shot Sam Cooke through the hurt. When the L.A.P.D. arrived, Sam Cooke was found wearing just his sport’s jacket and a shoe. It was a surreal sight. Since then, Sam Cooke’s somewhat unsavoury death has been shrouded in controversy. Nobody knows for certain what happened. Was Sam in the wrong or wronged? Even today, nobody knows. Rumours and conjecture surround what happened at the Hacienda Motel, Los Angeles. Sadly, we’ll never know for sure the truth surrounding Sam Cooke’s death. His death impacted on The Valentinos’ career.

Following the death of Sam Cooke, SAR Records folded. Sam Cooke was its driving force. Without him, SAR Records collapsed. This left The Valentinos without a record label.

Nor for long. Having mourned the loss of Sam Cooke, The Valentinos signed to Chess Records in 1965, and in 1966, released two singles, Do It Right and Let’s Get Together. Neither single charted, and The Valentinos were dropped by Chess. However, by then, The Valentinos had been engulfed in scandal and become a quartet.

In March 1965, Bobby Womack turned twenty-one. He also announced he was about to be married. His bride-to-be was none other than Barbara Campbell, Sam Cooke’s twenty-nine year old widow. This didn’t go down well with the public and Sam Cooke’s fans. The Valentinos were engulfed in scandal.

When Bobby married Barbara, such was his admiration for Sam Cooke, that he even wore one of Sam’s suits. Later, Bobby said Barbara had asked him to do so. He also later claimed that at first, he only wanted to console Barbara, as he was scared she “may do something crazy.” However, within a few months, they were married. This came at a great cost to Bobby and The Valentinos.

Following his marriage to Barbara, Bobby left The Valentinos, and embarked upon a solo career. However, DJs boycotted Bobby’s singles and many record buyers turned their back on Bobby Womack. Briefly, he was a musical pariah. So much so, that the only work he could get, was as a session musician. However, the loss of Bobby also affected The Valentinos.

Listening back to Lookin’ For A Love-The Complete SAR Recordings, the loss of Bobby Womack affected The Valentinos badly. Bobby Womack played a huge part in The Valentinos sound. His unmistakable voice and harmonies from the rest of The Valentinos were like musical yin and yang. When Bobby combined power and passion, it was a joy to behold. So when Bobby left The Valentinos, it left a gaping hole, one that they would struggle to fill.

With Bobby’s solo career struggling, and The Valentinos on hold, later in 1966, Bobby approached his brothers about getting the family band together. However, not long after this, Bobby’s star was in the ascendancy again and the idea was scrapped. He would work with his brothers again, but this time, they would add backing vocals on his solo albums. Never again, would the classic lineup of The Valentinos reunite. 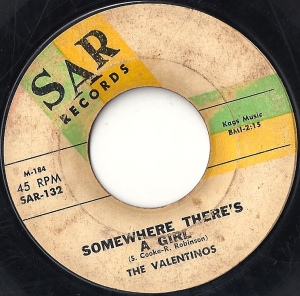 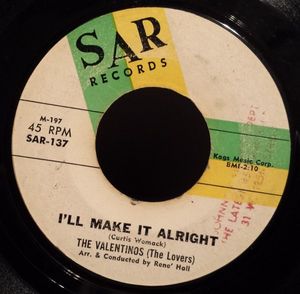