There’s much more to Buffy Sainte-Marie than music. That’s just part of the story. Buffy Sainte-Marie is an educator, social activist and visual artist. She was born on February 20th 1941, on the Piapot Cree First Nation Reserve in the Qu’Appelle Valley, Saskatchewan, Canada. However, Buffy was later adopted by Albert and Winifred Sainte-Marie.

Buffy Sainte-Marie was brought up by her adoptive parents Massachusetts. That’s where Buffy was first exposed to music. She would later make a career out of music, and in 1965, released Many A Mile on Vanguard Records. It’s recently been reissued by Vanguard Records, an imprint of Ace Records. Looking back, it seems almost inevitable that Buffy Sainte-Marie would make a career out of music.

Growing up, Buffy taught herself to play piano and guitar. By the time she was a teenager, Buffy was already writing songs. However, when Buffy left high school, she didn’t embark upon a career in music straight away. Instead, she headed to the University of Massachusetts Amherst.

From the early sixties, Buffy was touring around Canada and America. She played everywhere from coffee houses and concert halls to folk festivals. Two places Buffy played frequently were the Yorkville district of Toronto and Greenwich Village in New York. They were the focal points of the Canadian and American folk scenes. Just like Greenwich Village, the folk scene in Yorkville was vibrant. Joni Mitchell, Leonard Cohen and Neil Young. Just like Buffy, they would go on to enjoy long and illustrious careers. However, it wasn’t all plain sailing.

In 1963, Buffy suffered from every singer’s worst nightmare, a throat infection. The doctor prescribed Codeine. Unfortunately, Buffy became addicted to Codeine. However, she eventually beat her addiction, and wrote a song about her experience, Cod’in. It would later, be covered by numerous artists, included Janis Joplin, Donavon, Quicksilver Messenger Service and Gram Parsons. By then, Buffy’s recording career would’ve begun. Before that, she was about to become the homecoming queen.

1964 saw Buffy return to a return trip to where she was born, the Piapot Cree reserve in Canada. She was warmly welcome to her spiritual home. So much so, that she was “adopted”  by the youngest son of Chief Piapot, Emile Piapot and his wife. This reinforced Buffy’s interest in her of her people. She would make them proud a year later.

By 1964, Buffy found herself signed to Vanguard Records, which by then, was folk’s premier label. Although she was just twenty-three, Buffy was more than ready to record her debut album, It’s My Way.

For It’s My Way, Buffy had penned twelve tracks. Some she had written many years previously. Others, including Cod’in and Universal Soldier were recent compositions. Buffy was inspired to write Universal Soldier. This came about when Buffy saw the first injured veterans arriving back from Vietnam. The US government were denying that their injuries had happened in Vietnam. This prompted Buffy to pen Universal Soldier in The Purple Onion coffee house in Toronto. A year later, in 1965, Universal Soldier gave Donavon a hit single. However, in 1964, Buffy was hoping that her debut album It’s My Way would be a commercial success.

When It’s My Way was released later in 1964, it was to widespread critical acclaim. The songs were a scathing inditement on modern society. They were variously powerful, moving and disturbing. Buffy Sainte-Marie seemed to have struck a nerve. Sadly, this didn’t result in a commercially successful album.

Despite the commercial failure of It’s My Way, Buffy Sainte-Marie was regarded as one of the rising stars of folk music. By 1965, she was playing in Canada, America and occasionally abroad. Other artists were beginning to cover her songs, including Donavon, who covered Universal Soldier in 1965. However, what Buffy wanted was to release a successful album.

Just like It’s My Way, Buffy wrote many of the songs on Many A Mile. She penned a total of seven songs, including what would become Buffy’s most famous song, Until It’s Time for You To Go. It would be covered by everyone from Elvis Pressley to Françoise Hardy and Neil Diamond. However, in 1965, it was just one of seven songs Buffy had written for her sophomore album Many A Mile. The others were cover versions.

Among the cover versions were adaptations of traditional songs, including Must I Go Bound, Los Pescadores, Groundhog, On the Banks of Red Roses, Maple Sugar Boy, Lazarus and Come All You Fair and Tender Ladies. Other tracks included covers of Bukka White’s Fixin’ To Die and Patrick Sky’s Many A Mile. These tracks were recorded with producer Maynard Solomon.

When recording of Many A Mile began, Buffy was accompanied by bassist Russ Savakus. Daddy Bones played guitar on The Piney Wood Hills. Patrick Sky made a guest appearance on Many A Mile. Once the fourteen tracks were recorded, Many A Mile was released later in 1965.

Before Many A Mile was released, critics had their say on Buffy Sainte-Marie’s sophomore album. They were impressed by the mixture of traditional songs, cover versions and original material that Buffy had chosen. They were brought to life by Buffy, and producer Maynard Solomon.

For Many A Mile, producer Maynard Solomon decided less is more. His productions are sparse and understated. It’s just bass, guitar and taking centre-stage, Buffy’s vocal. Maynard Solomon’s arrangements aren’t polished. This is deliberate. Instead, they’re roughly hewn. This is fitting, given the material on Many A Mile.

Five of the tracks on Many A Mile are traditional songs. They were arranged by Buffy. Some of these songs have been passed from generation to generation. When they were first sung, they didn’t have a lavish arrangement. Instead, it would be just traditional instruments, and later a guitar that would accompany the songs. So, Buffy stays true to their roots. With the roughly hewn, sparse arrangements and Buffy’s vocal taking centre-stage, it’s a captivating combination. This includes on Groundhog, where Buffy plays a mouthbow.  It’s a traditional stringed instrument from South Africa. Mostly, though, it’s just guitars and a bass that accompany Buffy.

That’s the case on the seven tracks she wrote. The standout track is Until It’s Time For You To Go. It oozes quality, and it’s no surprise that numerous artists covered this track. Another of Buffy’s compositions on Many A Mile would become a familiar song. That’s The Piney Wood Hills. Buffy later rewrote the song, and it became I’m Gonna Be A Country Girl Again. It became a favourite of country artists, and is another of Buffy’s most famous songs. Each of the songs she wrote for Many A Mile are brought to life by Buffy.

Buffy doesn’t so much deliver lyrics, she lives them, breathing life, meaning and emotion into them. She does this on each of the fourteen tracks, including the ballads and five traditional songs. Stylistically, she veers between folk, country, blues and Americana, proving that she’s a versatile and talented singer. One of the many highlights is her reading of Bukka White’s Fixin’ To Die. This blues takes on new meaning in Buffy’s hands. Given the quality of Many A Mile, surely it would become Buffy’s breakthrough album?

On its release in 1965, Many A Mile failed to chart. This was disappointing for Buffy and everyone at Vanguard Records. However, success wasn’t far away for Buffy Sainte-Marie.

Buffy had already released seven studio albums and the soundtrack to Illuminations by 1971. Other artists were covering Buffy’s songs, and enjoying commercial success with her songs. By 1971, Buffy was already a regular on Canadian and American television. She had featured on  American Bandstand, Soul Train, The Johnny Cash Show and The Tonight Show. Buffy Sainte-Marie had come a long way since the release of her sophomore album Many A Mile in 1965. It was recently reissued by Vanguard Records, an imprint of Ace Records. Many A Mile showcases the considerable talents of Buffy Sainte-Marie, whose much more than a singer, songwriter and musicians. 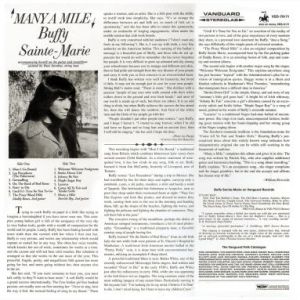 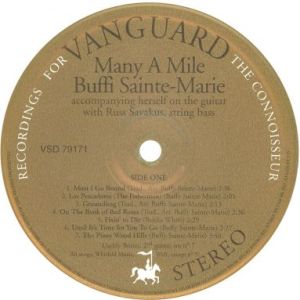