Each week, there’s countless compilations released. It seems that just about every genre is covered. Whether it’s psychedelia, rock and reggae or disco, funk and soul, there’s nearly something for everyone. I say nearly, because recently, there’s been a dearth of jazz compilations.

While there’s plethora of reissues of jazz albums and even low price box sets, compilations seem to have taken a back seat. That’s a great shame. Often, jazz compilations have been a gateway to the genre. They allow a newcomer to the genre to hear a variety of artists. It’s allows a newcomer to jazz to dip their musical toe into the water. When they discover that the water is indeed lovely, they embark upon a lifelong love affair with jazz. However, recently, the water has been choppy.

It seems compilers are turning their backs on jazz compilations . They’ve decided that other genres offer more profit potential. Nowadays, record companies aren’t willing to take risks. Instead, they’re risk averse. They’re unwilling to risk their capital on a lovingly compiled, lavish compilation of jazz which may only sell a few thousand copies. Especially, when they can play things safe.

So a new generations of music lovers, wanting to dip their toe into the world of jazz are left wondering how to do so? Many of the compilations that introduced a previous generation to jazz are now hard to find, or have been deleted. They’re left bewildered by how to find an introduction to jazz, which many sees as one of the most complicated musical genres.

Like all musical genres, there are sub-genres in jazz. A newcomer to jazz can be mystified by the various sub genres. Trying to distinguish  the difference from bebop to post bop and modal jazz to free jazz isn’t easy. For many jazz veterans, compilations helped smooth their way through the waters, and played an important part in their jazz education. Recently, as  Alice Cooer sung: “school’s out for summer.” I was beginning to wonder if he was right, and that: “school’s out forever?” That seemed to be the case. Or is it?

Having spent some time looking for a jazz compilation to review, the nearest I came was a soundtrack, which was recently released by Cinewax/Light In The Attic. Low Down-Original Motion Soundtrack tells the story of jazz pianist Joe Albany. It’s based on his daughter Amy-Jo Albany’s memoirs. She chose the fifteen tracks on Low Down-Original Motion Soundtrack. It includes seven tracks from Joe’s back-catalogue. This Amy-Jo Albany hopes that will be a primer for her father’s work. There’s also tracks from Coleman Hawkins, Max Roach and Thelonious Monk. These tracks may introduce a new generation to three jazz giants. There’s also tracks from  Ohad Talmor’s score. His tracks pay stylistic homage to Joe Albany, whose been described as an ” extraordinary talent and life.” That’s what Joe Albany became. Joe’s Albany’s story began in 1957..

He was born Joseph Albani in Atlantic City, New Jersey on January 24th 1924. Growing up, Joe studied the piano. He was a natural. So much so, that by the time he was nineteen, he was making a living out of music.

By 1943, the nineteen year old Joe Albany was playing piano in Benny Carter’s orchestra. Three years later, in 1946, Joe  accompanied Charlie Parker. The same year, he played alongside twenty year old Miles Davis. People were taking notice of the twenty-two year old pianist from New Jersey. He was one of jazz’s rising stars.

After rubbing shoulders with two future legends of jazz, Joe’s career continued apace. He worked with various artists, and in 1957, recorded an album with saxophonist Warne Marsh and bassist Bob Whitlock. The Right Combination was released on the Riverside label in 1957. Sadly, Joe wouldn’t record another album for two decades.

Disaster struck for Joe Albany. Like so many jazz musicians, Joe discovered heroin, and became addicted to heroin. For the rest of the fifties, and much of the sixties, bravely Joe battled his addiction. During this period, Joe lived a reclusive lifestyle in Europe, where many American jazz musicians now called home.

His time in Europe was part of Joe Albany’s lost years. The man who previously, had been one of jazz’s rising stars, was lost to music. This was a huge loss for anyone who loved jazz. Joe Albany was one of the great bebop pianists. To quote Marlon Brando. Joe; “could’ve been a contender, could’ve been someone.” However, for two decades he was lost to music.

It wasn’t until 1972, that Joe Albany recorded another album. Incredibly, for a musician that was a year away from celebrating thirty years in music, Joe hadn’t recorded a solo album. He rectified this with the release of Joe Albany At Home in 1972. This was the start of the most productive period of Joe’s career.

Twenty-six years after they last recorded together, Joe and Bob Whitlock reunited, were part of a trio who released Proto–Bopper in 1973. Later in 1973, Joe was part of another trio.

The trio featured Joe, Hans Nymand and Hugo Rasmussen. They released the live album, Birdtown Birds Recorded Live At Montmartre. This live album was Joe’s second of 1973. It seemed Joe Albany was the comeback king.

1974 saw Joe release another two album. He released Two’s Company with Danish bassist Niels-Henning Ørsted Pedersen. Then a quintet that featured Joe Albany and Joe Venuti released their eponymous album. Joe’s career seemed to have been rejuvenated. Living in Scandinavia was suiting him.

Another two years passed before Joe Albany released his sophomore solo album. He had been making music for over thirty years when Joe released This Is For Friends in 1976. It was a poignant title, given what Joe had overcome. He was now about to release three albums in the space of a year.

Like many musicians before him, Joe Albany delved into the great American songbooks. He released Plays George Gershwin and Burton Lane in 1977. The Albany Touch a trio recording with Art Davis and Roy Haynes. Live In Paris was the other album Joe released in 1977. It featured Alby Cullaz and Italian drummer Aldo Romano. After three albums in a year, it was another two years before Joe returned.

Bird Lives! was released in 1979, and saw Joe Albany reunite with Art Davis and Roy Haynes. The trio payed homage to a jazz great, Charlie Parker, who thirty-three years earlier, Joe had accompanied. Ironically, that proved the penultimate album that Joe was released during his life.

The final album released during Joe Albany’s lifetime was Portrait Of An Artist. It was a quartet recording featuring Jo, drummer Charlie Persip, cellist George Duvivier and guitarist Al Gafa. Portrait Of An Artist was released in 1982, and proved to be the final album of Joe Albany’s career. He died six years later on January 12th 1988 in New York. The cause of death was respiratory failure and cardiac arrest. Jazz was in mourning.

Joe Albany was only sixty-three when he died. However, he done enough living to last several lives. He had been married several times, and lived what’s best described as a colourful life. It’s documented in his daughter’s memoirs. Amy-Jo Albany penned Low Down: Junk, Jazz, and Other Fairy Tales from Childhood. It’s now been turned into a film. Amy-Jo has played a huge part in the project, and even features in the film. She even compiled the music on Low Down-Original Motion Soundtrack.

Fittingly, Joe’s first contribution to the Low Down-Original Motion Soundtrack is from The Right Combination, his collaboration with Joe Marsh. Lush Life comes from an Italian release The Legendary Joe Albany. Barbados featured on Joe’s 1972 comeback album At Home Alone. Lotus Blossom was a track from Joe’s 1976 album This Is For Friends. Everybody Knew But Me features a vocal that more than hints at betrayal. It’s a poignant track. Joe’s final contribution is The Nearness Of You. It’s another track from The Right Combination. This bookends Joe Albany’s contribution to the Low Down-Original Motion Soundtrack.

There’s also tracks from three legends of jazz. This includes Ruby, My Dear, which was penned by Thelonious Monk and featured on the Thelonious Monk Septet’s 1957 album Monk’s Music. The same year, Coleman Hawkins’ recorded his Think Deep album in New York on the 12th and 15th 1957. Around this time, Joe Albany was also making his recording debut. However, Think Deep was released until 1968. By then, Joe Albany had been lost to jazz for over a decade.

Despite being fifteen years Joe’s senior, Ben Webster had a lot in common with Joe Albany. After playing with Count Basie and then Duke Ellington, Ben played with everyone from Jimmy Withersoon to Oscar Peterson and Coleman Hawkins. He was also a member of Jack Teagarden And His Big Eight when they recorded Big Eight Blues. Eventually, Ben, like Joe left America. Ben spent the remained of his life in Copenhagen, Denmark, which became his adopted home until his death in 1973. One of Ben Webster’s most famous recordings, is Big Eight Blues which also features on the Low Down-Original Motion Soundtrack. It too was chosen by Amy-Jo Albany to provide the backdrop to his life-story. However, the man tasked with providing the score, was Ohad Talmor, a French saxophonist.

That’s just telling part of the story. Ohad Talmor was born in Lyon, France in 1970. His parents were Israelis, who moved to Switzerland. That’s where Ohad Talmor and mastered the saxophone. Since then, he’s come a long way.

Now the multitalented Ohad Talmor is a saxophonist, arranger and composer. He now resides in Brooklyn, which he’s called home for some time. Fittingly, that’s not far from where Joe Albany was born and brought up.

It brings to an end the story of Joe Albany’s eventful and colourful life. Low Down is based on his daughter Amy-Jo Albany’s memoirs. She tells her father’s  story via the fifteen songs on Low Down-Original Motion Soundtrack. Amy-Jo Albany also features in Low Down, and is the executive producer. She’s a talented lady who described the soundtrack to Low Down as: “a beautiful homage to Joe Albany’s extraordinary talent and life.” That’s certainly the case.

Joe Albany was  hugely talented pianist whose music is cherished by many. However, sadly, there are still people have yet to discover Joe Albany’s music. Amy-Jo Albany hopes that the Low Down-Original Motion Soundtrack will act as a primer for her father’s music. I certainly hope that that’s the case. Let’s also hope that any newcomer to jazz who buys the Low Down-Original Motion Soundtrack, will embark upon a lifelong love affair with jazz. 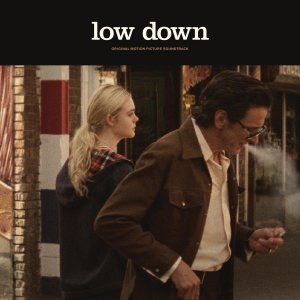