Inspired by Link Wray, The Ventures and Duane Eddy’s rock instrumentals, Dick Dale added elements of Middle Eastern and Mexican music. The final piece of this musical jigsaw was reverb, and lots of it. This gave the signal a wet sound. In an instance, Dick Dale’s trademark trademark surf guitar sound was born.

It found its way onto record in 1961, when Dick Dale and His Del-Tones released the surf classic, Let’s Go Trippin.’ Dick released what’s now regarded as the first surf rock instrumental on his own label, Deltone. By then, he had already released three previous singles. His debut single Ooh-Whee Marie was released in 1959. However, Let’s Go Trippin’ proved a game-changer.

After the release of Let’s Go Trippin’ Dick Dale and His Del Tones were playing to audiences of over 3,000. Quickly, surf rock was becoming a musical phenomena.

So it was no surprise, that other bands were formed. As surf rock grew in popularity, established bands decided to jump on the surf rock bandwagon. The first half of the sixties saw surf rock’s popularity soar. Joining Dick Dale and His Del-Tones, were The Rip Tides, The Rumblers, The Sentinals, The Baymen, The Torquetts, The Rondells, Marrell’s Marauders, Buddy Lee and the Satellites and The Surfaris. Each of these groups became part of the surf phenomena. They also feature on The Birth Of Surf Volume 3, which was recently released by Ace Records.

The Birth Of Surf Volume 3 is a twenty-six track compilation. It was compiled by Alan Taylor and Dave Burke of Pipeline Magazine. They also put their extensive knowledge of surf rock to good use, when thy wrote the sleeve-notes. They’re detailed and informative, which is ideal for the newcomer to surf rock. What better way to learn out the genre, than through The Birth Of Surf compilation series. This lovingly compiled is guaranteed to whet the appetite of veterans and newcomers to surf rock. No wonder. It features some of the genre’s best known names, plus a few new names. The Best Of Surf Volume 3 is a perfect mixture of the familiar and hidden gems.

Just like Billy Mure, Richie Allen Podolor was a session musician. He played guitar on Sandy Nelson’s Teen Beat and Let There Be Drums. Seeing Sandy Nelson enjoy two hit singles, Richie decided to release a single. So he released Stranger From Durango as Richie Allen. It reached the US Billboard 100. This wasn’t a case of beginner’s luck. No. Richie Allen had released several guitar instrumentals of Imperial. However, Richie hadn’t released a surf rock instrumental. That changed in 1962, when Richie played lead guitar on The Beachcombers understated and wistful single Lone Survivor, It was released on the Dot Records, and was The Beachcombers’ finest hour.

When The Rumblers were looking for a name for their nascent group, they decided to pay homage to Link Wray’s 1958 hit single Rumble. In an instant, The Rumblers were born. Their debut single was the Jack Wenzel penned Boss. It was released on Downey Records in February 1963, and the tough twangy sound proved popular. Boss found its way into the US Billboard 100. Not long after this, Dot Records picking up The Rumblers, and an album entitled Boss was released later in 1963. Sadly, it was the only album The Rumblers released. After three singles and an E.P., The Rumblers’ story was over. Its legacy was Boss, a minor surf classic.

By the time The Baymen released Bonzai as a single in 1963, their lead guitarist John Anderson was a veteran musician. After all, he had been in bands ever since he was thirteen. However, The Baymen, who were a sextet, only ever released one single, Bonzai. It was Phill Anderson’s recording debut. Soon, The Baymen in full flight. It’s an impressive and blistering slice of surf rock. Sadly, The Baymen were a short-lived band.

Later in 1963, Phil Anderson joined Eddie and The Showmen. Then by 1966, Phil was a member of The Clee-Shays. That wasn’t the end of Phil’s musical career. He later joined Space, The Humans, The Ninja Nomads and The Neon Spores. Music it seemed ran through Phil’s veins and for four decades he was making music. However, the single that leached Phil’s career, was Bonzai.

The more popular surf rock became, the more bands new bands were formed. Old bands reinvented themselves, including The Stormtroopers. They became The Astronauts. This reinvention paid off. Suddenly, The Astronauts were signed to RCA, who wanted a slice of the surf rock phenomenon. They hoped The Astronauts would rival The Beach Boys. So RCA sent The Astronauts into the studio in September 1963, where they cut nine tracks. One of these tracks was Surf Party. It was by 20th Century Fox for their film Surf Party. For The Astronauts this was a huge boost to their career. Later in 1963, Surf Party was the flip side of The Astronauts third single Firewater. Given the quality of Surf Party, this seems a strange decision. Since then, Surf Party has remained something of a hidden gem, which makes a welcome return on The Birth Of Surf Volume 3.

Originally, The Charades Band started life backing the vocal group The Charades. They accompanied them live and played on their recordings. The Charades Band were too good to be a backing band. It was only after guitarist Eddy Cuellar penned Christina, that The Charades Band caught a break. They were signed to the Impact label, where they released Christina as a single in 1964. It’s another of the more understated songs on The Birth Of Surf Volume 3. Melancholy and cinematic, it shows another side to the surf rock instrumental.

There had to be a single from Dick Dale, the founding father of the surf rock instrumental on The Birth Of Surf Volume 3. With so many tracks to chose from, it couldn’t have been easy for the compilers. They settled on The Victor, a track from Dick Dale and His Del-Tones’ 1964 album Mr. Eliminator. The Victor is a classic, and is the perfect showcase for Dick Dale’s virtuoso  skills.

In May 1964, The Pyramids released their debut album The Pyramids Play The Original Penetration! Originally, Pressure was meant to feature on the album. When it wasn’t completed on time, Pressure became one side of The Pyramids’ fourth single. On the other side was Contact. The two tracks were released as a double-A-side on Cedwicke Records. Of the two tracks, Pressure is the standout track. Despite having two bites of the musical cherry, this double-A-side didn’t match the success of their earlier single Penetration. It had reached the top twenty in the US Billboard. This time round, it was a case of what might have been.

Another band who decided to reinvent themselves as a surf band were The Treasures. They started life as The Staccatos, before becoming The Knights. That wasn’t the end of the story. The Knights then became The Treasures. Now that they had settled on a name. However, The Treasures’ lineup was fluid. One constant was guitarist Paul Hubbard, who penned Minor Chaos. It was released on the Valor label in 1964, and epitomises everything that’s good about a surf rock instrumental. Sadly, Minor Chaos wasn’t a commercial success, and is one of the hidden gems that feature on The Birth Of Surf Volume 3.

My final choice from The Birth Of Surf Volume 3, is The Surfaris’ Storm Surf. Given this a track from the band that were responsible for Wipe Out, quality is almost guaranteed. After a brief nod to their classic Wipe Out, lead guitarist Jim Fuller showcases his considerable skills. Incredibly, this version of Storm Surf was recorded in a home studio, and wasn’t released until 1998. It was a case of better late than never, as The Surfaris roll back the years to the glory days of the surf rock instrumental.

The Birth Of Surf Volume 3 is essentially a journey back to the glory days of the surf rock instrumentals. There’s twenty-six tracks from familiar faces and new names. Among the familiar faces is the founding father of the surf rock instrumental, Dick Dale. Joining Dick Dale and His Del-Tones are The Rip Tides, The Rumblers, The Sentinals, The Baymen, The Torquetts, The Rondells, Marrell’s Marauders and The Surfaris. That’s just a tantalising taste of The Birth Of Surf Volume 3. It was lovingly compiled by Alan Taylor and Dave Burke of Pipeline Magazine.

They’ve certainly put their extensive knowledge of surf rock to good use when they compiled The Birth Of Surf Volume 3 which was recently released by Ace Records. That becomes apparent in the sleeve-notes. They’re detailed and informative. This is ideal for the newcomer to the surf rock instrumental. 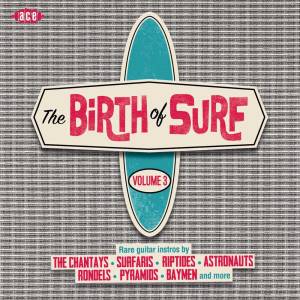 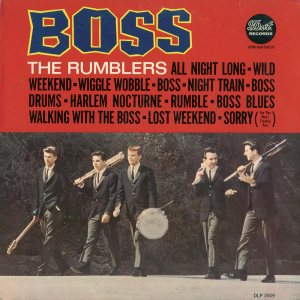