During this seven year period, Marvin Gaye released six albums. Three of these albums reached number one in the US R&B Charts, but only What’s Going On was certified gold. Given the quality of these six albums, that’s a remarkable statistic.

The followup to What’s Going On, was Trouble Man, which saw Marvin follow in the footsteps of Isaac Hayes, Curtis Mayfield and Bobby Womack, in composing the soundtrack to a Blaxploitation movie. So for anyone who is either a fan of Marvin Gaye, or Blaxploitation movies, this should be a must-have? Is that the case though? That’s what I’ll tell you, once I’ve told you about the background to Trouble Man.

After the success of 1971s politically charged classic What’s Going On, this had transformed Marvin Gaye’s career. He’d just signed a new contract with Motown imprint Tamla, worth a million dollars. This was the most lucrative recording contract an R&B artist had signed. Just as importantly, Marvin Gaye had won full creative control over his music. No longer had he seek approval from the Motown hierarchy if he wanted to go off piste musically. Without that creative freedom, Marvin have had to seek permission to record the soundtrack to a Blaxploitation movie, like Trouble Man.

Trouble Man had been written by John D.F. Black and was directed by Ivan Dixon, with cinematography by Michael Hugo. The cast included Robert Hooks as Mr. T, Paul Winfield as Chalky Price and Paula Kelly as Cleo. However, this was no Blaxploitation classic Marvin was being asked to provide the soundtrack for. Quite the opposite. In Harry Medved and Randy Dreyfuss’ The 50 Worst Films of All Time, Trouble Man has the dubious honor of being one of the fifty flops of filmography. So, it was against that backdrop Marvin began work on Trouble Man.

At Motown’s Los Angeles studios, Marvin Gaye put out a call to members of the Funk Brothers and Hamilton Bohannon’s band. This included a rhythm section of bassist Wilton Felder, drummer Earl Palmer and guitarists Louis Shelton and Don Peake. Bob Ragland and Larry Mizell played piano, while Gene Page was contracted to provide the strings. Horns came courtesy of saxophonist Trevor Lawrence, Eli Fountain and Marty Montgomery, plus Dale Oehler and James Carmichael. For his part, Marvin played drums, keyboards, piano, synths and took charge of vocals and harmonies. Looking at the booklet that accompanies the newly released version of Trouble Man, disappointingly, many of the personnel that played on the album are listed as “unknown.” Surely, somewhere in Motown’s archives, there must be records of who played on the sessions? Arrangers included Dale Oehler, Jerry Long, James Carmichael and Gene Page. Producing the fusion of soul, jazz and funk that is Trouble Man was Marvin Gaye.

On the release of Trouble Man on 8th December 1972, critics gave the album a favorable reception. Obviously, comparisons were drawn with Isaac Hayes’ Shaft, Curtis Mayfield’s Super Fly and Bobby Womack’s Across 110th Street. Composer Gene Page. This was only reasonable, given they were the same genre of music. While Shaft and Super Fly set the bar high, Marvin’s debut soundtrack was perceived as a success. It reached number fourteen in the US Billboard 200 and number three in the US R&B Charts. Trouble Man became Marvin’s second most successful album. Only the title-track Trouble Man was released as a single, reaching number seven in the US Billboard 100 and number four in the US R&B Charts. Sadly, Trouble Man would be Marvin Gaye’s only foray into world of soundtracks.

Of the other five tracks on the original version of Trouble Man, The Break In (Police Shoot Big) veers between drama and a melancholy, wistful sound. So too does the saxophone led Poor Abbey Walsh. It has a real pensive, heartbreakingly sad sound. Like Cleo’s Apartment, it’s one of the highlights of Trouble Man and is understated with Marvin adding sensual harmonies against a wistful piano. It’s Marvin Gaye at his best, on his only soundtrack album, Trouble. Without doubt, Marvin Gaye’s Trouble Man album was much better than the film itself.

Anyone whose managed to sit through John D.F. Black’s Trouble Man will be familiar with the thirteen tracks. Like many Blaxploitation movies, the soundtracks are far better than the original movie. That’s the case here.  Trouble Man features in Harry Medved and Randy Dreyfuss’ The 50 Worst Films of All Time. The best thing about the film was Marvin’s music.

That’s the case from the opening bars of Main Theme From Trouble Man to the closing notes of  There Goes Mr. “T”, it becomes apparent that Marvin Gaye written and produced one of the best scores to a Blaxploitation movie.  Jazz, soul and funk are fused over thirteen tracks. These tracks are variously atmospheric, moody, broody, dramatic, sensual and action-packed. Once you’ve heard Trouble Man, you can’t resist reaching over and turning the vinyl over and once  again, revisit the subtleties, secrets and nuances of the music again.

So Commercial Marketing’s forthcoming reissue of Trouble Man on vinyl on 27th May 2016 will be a welcome one. Trouble Man is a must-have for fans of Marvin Gaye and Blaxploitation music. It’s part of an extended reissue of Marvin Gaye’s seventies album on vinyl that covers the period between 1971 and 1978.

What’s Going On marked the start of Marvin Gaye’s career as a serious artist. Indeed, What’s Going On, was far removed from the poppy soul Marvin Gaye had previously been a purveyor of. Not only did What’s Going On, mark a coming of age as an artist for Marvin Gaye, but was the start of a series of critically acclaimed and commercially successful albums he’d release between 1971 and 1978. The second album in this period was Trouble Man, which has been nicely mastered, and sounds better than the Hippo CD version released in 2013. This vinyl version is the one for purists to buy. Indeed, Trouble Man is something of a hidden gem in Marvin Gaye’s back-catalogue.

Like his 1978 double-album Here, My Dear, Trouble Man is an often overlooked album in Marvin Gaye’s back-catalogue. Both albums contain some of Marvin Gaye’s best music of the seventies. Trouble Man also is also proof that Marvin Gaye, like Isaac Hayes, could’ve enjoyed a career composing movie soundtracks.

Sadly, that wasn’t to be. Trouble Man was his only soundtrack. The followup to Trouble Man, while not a soundtrack, was a stonewall classic, Let’s Get It On. It marked the next chapter in his career, and was the third of six critically acclaimed and commercially successful albums Marvin Gaye released during the seventies. During the period between 1971 and 1978, Marvin Gaye only released one composed one soundtrack, Trouble Man. Mind you, if you’re only going to release one soundtrack, make it one that’s becomes a Blaxploitation classic, like Trouble Man. 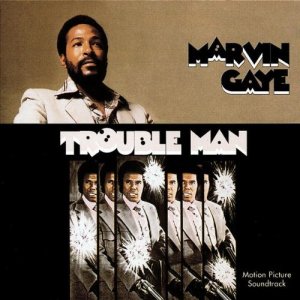 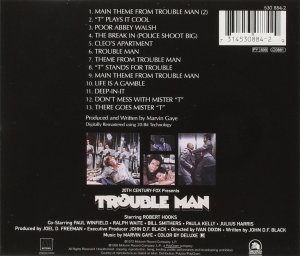