Last year, I described Norwegian space rock pioneers, Black Moon Circle as one of the rising stars of the Norwegian music scene. Since then, Black Moon Circle’s star has been in the ascendancy. Their third album, The Studio Jams Volume I: Yellow Nebula In The Sky was released to widespread critical. Soon,  Black Moon Circle were being invited to play at major festivals across Europe. This included the prestigious Roadburn Festival, in the Netherlands.

The Roadburn Festival took place in Tilburg, between the 14th-17th April 2016. Black Moon Circle made their festival debut on the 15th of April. This was perfect timing. That day,  Black Moon Circle released their much anticipated fourth album Sea Of Clouds on heavyweight vinyl, via Crispin Glover Records.  Sea Of Clouds finds Black Moon Circle continuing to reinvent themselves musically. They’ve been doing this since their career began in 2012.

That was when brothers Øyvin Engan and Vemund Engan formed Norwegian psychedelic space rock band, Black Moon Circle. This wasn’t the Engan brothers first band. No. They were previously, members of Trondheim-based punk rock band The Reilly Express. That was the past.

By 2012, the Engan brothers were ready to form their own band. However, it wasn’t another punk rock band. Instead, Black Moon Circle would become a psychedelic space rock band. Øyvin, played bass, guitar and takes charge of vocals. His brother Vemund was also a guitarist. Now all that Black Moon Circel needed was a drummer.

Black Moon Circle are just one of many Norwegian space rock bands. Earthless and Colour Haze are two other bands, who are flying the flag for space rock. In Black Moon Circle’s case, they’ve been doing this since 2013.

That’s when Black Moon Circle recorded their eponymous, debut, mini-album at Nautilus studios in 2013. Black Moon Circle was then released in February 2014 by Space Rock Productions, the label run by the Øresund Space Collective from Copenhagen, Denmark. However, Black Moon Circle aren’t the type of band to let the grass grow under their feet.

Black Moon Circle’s sophomore album, Andromeda, was released by Crispin Clover Records, to critical acclaim in October 2014. A great future was forecast for the Trondheim based trio. They were already hatching a plan that sounded like something from the seventies, the golden age of rock. 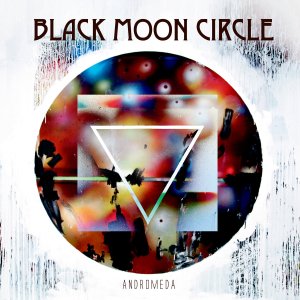 The Studio Jams Volume I: Yellow Nebula in the Sky.

The Studio Jams Volume I: Yellow Nebula in the Sky was the finest album of Black Moon Circle’s career. It features their unique brand of  psychedelic space rock with elements of electronica, experimental music and free jazz added for good measure. Seamlessly, these disparate musical genres and influences merge into something new and innovative. It’s cinematic, dramatic, futuristic, moody, rocky and as Øyvin Engan says, “intense.

This intensity is deliberate. It comes courtesy of the three members of Black Moon Circle. They deployed layers of fuzzy guitars, spacey, lysergic synths and a mesmeric rhythm section on The Studio Jams Volume I: Yellow Nebula In The Sky. However, for their fourth album, Sea Of Clouds Black Moon Circle add two new ingredients to their successful musical formula. 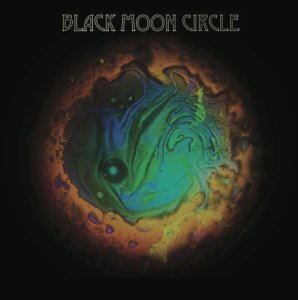 With The Studio Jams Volume I: Yellow Nebula In The Sky recorded, but not yet released, Black Moon Circle’s thoughts turned to their fourth album. This wasn’t another instalment in the Studio Jams’ series. Instead, what became Sea Of Clouds found Black Moon Circle changing direction slightly.

Having written four new tracks, the Trondheim based trio returned to the studio in June 2015. Øyvin Engan played guitar and bass, while his brother Vemund Engan added another layer of fuzzy guitars. Providing the heartbeat was drummer Per Andreas Gulbrandsen. Together they recorded flour lengthy jams in just one day, However, that wasn’t the end of the story.

A month later, during July 2015, Black Moon Circle returned to the studio. This time, vocals and keyboards were added. Only then, was Sea Of Clouds complete. Before that, The Studio Jams Volume I: Yellow Nebula in the Sky was still to be released.

Nearly nine months later, and buoyed by the critical acclaim thatThe Studio Jams Volume I: Yellow Nebula In The Sky received, Black Moon Circle are preparing to release ASea Of Clouds. Øyvin Engan describes the new album as: “prolonged jams with heavy riffage, the extensive use of effects on bass and guitar and analogue synths oscillating with echoes and delays.” This is sure to win over Black Moon Circle’s over growing fan-base, when Sea Of Clouds is released. You’ll realise why, when I tell you about Sea Of Clouds, the much anticipated album from space rock pioneer Black Moon Circle.

Lunar Rocket opens Sea Of Clouds. That’s a fitting title as the track will eventually, explode into life. Before that,  just moody, spacious, bluesy and rocky guitar riffs are played. Sometimes, they tremble and shimmer. Then after a minute, it’s all change.

The arrangement literally explodes. Pounding, thunderous and relentless drums join the bass in powering the arrangement along. Buzzing, searing, rocky guitars accompany Øyvin’s powerhouse of a vocal. Soon, an array of effects are unleashed. They’ve always been Black Moon Circle’s secret weapons, and  play an important part in their space rock sound. By then,  Black Moon Circle are at their heaviest and most melodic. They seem to have drawn inspiration from  April Wine, Black Sabbath, Deep Purple, Led Zeppelin, Hawkwind, Moster and Motorpsycho. Elements of space rock, psychedelia and heavy metal combine seamlessly. Guitars bristle, drums pound and a buzzing bass joins whirling, space-age, haunting synths. In the midst of this musical vortex is  Øyvin’s vocal. He seems to embrace the roll of frontman, on this hard rocking, slice of melodic space rock, that shows a new side to Black Moon Circle.

A droning wash of feedback is joined by bass and guitars on The Magnificent Dude. As a crystalline guitar plays, the rhythm section provide a slow, moody, hypnotic backdrop. When Øyvin’s vocal enters, he combines emotion and drama. All the time, the arrangement builds. Soon, a scorching, blistering guitar solo plays; while a vortex of synths blow across the arrangement. Effects are deployed, as everything from post rock, psychedelia and space rock are combined with Krautrock. When the vocal returns,  Øyvin and the rest of Black Moon Circle the track heads into anthem territory.  Still, though, Black Moon Circle aren’t afraid the kick loose. When the vocal drops out again, a guitar masterclass unfolds. Literally, the blistering, trembling guitar cut through the arrangement as  the rhythm section create a mesmeric backdrop. Later, the track  veers between moody, rocky and futuristic, thanks to the sci-fi  sounds and myriad of effects. Combined, they play their part in an alternative space rock anthem.

Moondog picks up where The Magnificent Dude left off. Just lone guitar is panned left.  It’s soon joined by another guitar, bass and bubbling synths. Soon, sci-fi synths and keyboards are added; before Øyvin’s vocal enters. By then, a myriad of instruments and effects assail the listener. Still, though, the lone guitar is  panned left.  Meanwhile, the rest of Black Moon Circle are responsible for a futuristic, rocky soundscape. Playing leading roles are a blistering guitar, a vortex of whirling, ghostly synths and an array of sci-fi effects. They’re responsible for a myriad of beeps and squeaks. However, the vocal proves to be a  game-changer. It adds the finishing touch to a track whose roots are in the seventies. There’s more than a nod to progressive rock, while elements of classic rock, psychedelia and space rock shine through. Later, memories of Yes and Emerson, Lake and Palmer come flooding back, before Øyvin’s vocal becomes briefly lysergic and the track become rocky, futuristic and again, anthemic.

Warp Speed closes Sea Of Clouds. Bursts of bass accompany a dubby, shimmering guitar. Meanwhile, cymbals are caressed before sci-fi synths and a machine gun guitar are unleashed. This is the signal for Øyvin to deliver a lived-in vocal. Accompanying him, are blasts of bass, scorching, searing guitars and relentless drums. By then, a vortex of synths, crunch guitar, bounding bass and driving drums. They provide a backdrop for Øyvin’s strutting vocal as Black Moon Circle become a rocking machine on this thirteen minute, genre-melting epic. It features Black Moon Circle at their hard rocking best as they set sail on the Sea Of Clouds at Warp Speed.

Just six months after the release of The Studio Jams Volume I: Yellow Nebula In The Sky, Black Moon Circle return with their fourth album Sea Of Clouds. It features the Trondheim-based space rockers at their groundbreaking best, as they continue to reinvent themselves.

To do this, Øyvin Engan’s added vocals to the four lengthy tracks on Sea Of Clouds. This results in a very different album to The Studio Jams Volume I: Yellow Nebula In The Sky. The music on Sea Of Clouds is melodic and anthemic. It’s also hard rocking.

Sea Of Clouds which was released on heavyweight vinyl by Crispin Glover Records, features a truly distinctive album cover. The artwork for Sea Of Clouds was designed by Marius Martinussen. He assembled 100 12” canvasses into a larger unit. After that, he painted the main cover motif. The first 100 hundred copies of the album will each include one original piece from the painting. So not only does Sea Of Clouds feature some of the best music of Black Moon Circle’s career, but could include a piece of original artwork. That’s if you order your copy of Sea Of Clouds early. If you do. it will be well worthwhile.

Sea Of Clouds features Trondheim groove-meisters Black Moon Circle at their hard rocking best. They kick loose from the opening bars of Lunar Rock, and never let go until the closing notes of Warp Rock. In between you’re treated a glorious assault on the sensory system. This comes courtesy of those genre-melting innovators Black Moon Cirle, and their critically acclaimed, fourth album Sea Of Clouds. 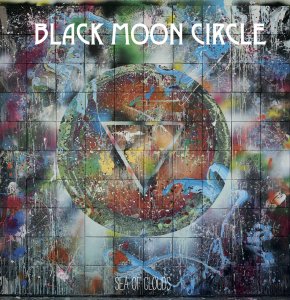 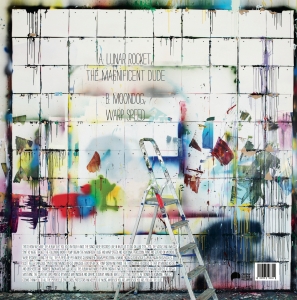 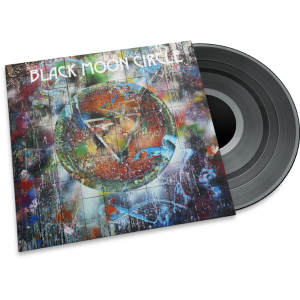