When Bob founded Mainstream Records in 1964, it was originally a jazz label, which mainly released albums and a few singles. However, by 1965, music was changing, and rock was King.

The newly relaunched Mainstream Records would feature a newly designed label and would release just jazz. Mostly, Bob Shad intended to return to releasing mostly albums, with the occasional single. This was the way Mainstream Records had originally operated. However, Bob Shad had developed a criteria for chewing the albums he was willing to release.

He was going to only release what he saw as traditional jazz albums. Bob Shad didn’t want to release albums where synths and electronics featured. This was unrealistic given that fusion’s popularity was on the rise. It was no surprise that this new policy didn’t last long, and Mainstream Records began to release soul and jazz.

By then, the there had been a blurring of the lines between what was soul and jazz. Even critics and record buyers were confused. However, this blurring of the lines resulted in Mainstream Records’ musical policy changing, and the label releasing a much wider selection of music. This included the music on Super Duper Love-Mainstream Hits and Rarities 1973-76, which was recently released by Kent Soul, which is an imprint of Ace Records.

Afrique were a studio band assembled by Bob Shad. The band featured some of Los Angeles’ top session players. Their debut  album was Soul Makossa, which was released in 1973. One of the singles chosen from the album was Soul Makossa. It was penned by Manu Dibango and released May 1973. Soul Makossa reached forty-seven on the US Billboard 100 and thirty-three in the US R&B charts. This was the first of several singles that Afrique enjoyed. However, Soul Makossa, which is a fusion of Afrobeat, funk and soul was one of their finest and funkiest moments.

Terry Huff had joined Special Delivery in 1975. Since then, the group were billed as Special Delivery featuring Terry Huff. He cowrote their single The Lonely One with Al Clements and Richard Person. It was scheduled for release in April 1976. This was exciting time for Terry Huff, this beautiful, orchestrated ballad had hit potential. However, a mere four days before Mainstream Records release of The Lonely One, Terry Huff was sacked by the band. For Terry Huff this was a huge disappointment. Especially as the single reached number seventy-five in the US Billboard 100 and eleven in the US R&B charts. This presented a problem for Bob Shad.

Originally, Linda Perry started off singing Southern Soul. By 1973, Linda had signed to Mainstream Records. In December 1973, Linda Perry was preparing to release her debut single. The song that had been chosen was the Eddie Billups’ penned I Cant Give You Up. Sadly, when it was released as a single, it failed to chart. That’s despite a needy, soul-baring vocal that oozes emotion and loneliness.

The story of Ellerine Harding is one of what might have been. She only ever released the one album Ellerine in 1972, and a handful of singles. This includes the Bert DeCoteaux produced  Let The Other Woman Cry Some in 1974. It was released in 1974, on IX Chains Records. Ellerine Harding’s vocal is soulful and sassy, while Bert DeCoteaux deploys strings, horns and harmonies. The result is a truly timeless track that sadly, was Ellerine Harding’s swans-song. It’s a reminder of truly talented singer who should’ve reached greater heights.

Lenny Welch’s recording career began in the late-fifties. Since then, he had moved between record labels.  Cadence, Kapp Records, Cadence, Columbia, Mercury and Atco Records had all been home to Lenny Welch. Then in 1973, Lenny Welch signed to Mainstream Records. By March 1974, he was ready to release Eyewitness News which he had penned with Rose Marie McCoy. It was arranged by Bert DeCoteaux and produced by Red Lion Productions. They play their part in song that’s slick, soulful and cinematic, with just a hint of disco stylings. Sadly, Eyewitness News failed to find the audience it deserved. Since, then it’s remained a hidden gem, that deserves to find a wider audience.

Before signing to Bob Shad’s IX Chains Records, Calvin Arnold was something of a musical nomad. He had wandered from label to label, searching for that ever elusive hit single. His luck changed when Satisfy My Love became his IX Chains Records’ debut single, and reached seventy-nine in the US R&B charts. Although it was only a minor hit single, it was Calvin Arnold’s breakthrough hit. For the followup, (I’m Your) Friendly Neighbourhood Freak was released. It was penned by Calvin Arnold and he co-produced the song with Barney Conway. When (I’m Your) Friendly Neighbourhood Freak  was released in 1975, this smouldering fusion of soul and funk reached seventy-nine. NowCalvin Arnold had two hit singles to his name. Maybe his luck was changing? Alas, that was as good as it got for the journeyman soul man.

Pittsburgh born Johnny Louis Gilliam’s career began in 1965, when he released his first single for Bo-Mar. Since then, he  had never stayed anywhere long. Johnny continued to move between labels in the search of that elusive hit. After ten years of trying, Johnny decided to take drastic action, and changed his name to J.G. Lewis.

Incredibly, this worked, when J.G. Lewis’ released Let The Music Play as a single. It was penned and produced by J.G. Lewis using his real name. When it was released on IX Chains Records, it entered the lower reaches of the US R&B charts.

Belatedly, J.G. Lewis had enjoyed a  minor hit, with memorable and melodic slice of soulful music.

Doris Duke is another of soul music’s best kept secrets. She never reached the heights that her considerable talents deserved. That’s despite being able to breath life, meaning and emotion into lyrics. This she does on Business Deal which was penned by Rose Marie McCoy and Helen Miller. It features a tougher funkier sound, as s Doris Duke struts her way through this Deep Soul hidden gem. Although it was released as a single on Mainstream Records in June 1973, it sadly, never found the audience it so deserved.

Forty years ago in 1976, Trieste released their cover of I Can See Him Loving You as a single on IX Chains Records. It was written by Ray Dahrouge and co-produced by George McRee and Carmine Rubino. When it was released, it failed commercially. That’s despite being catchy, melodic, soulful and dance-floor friendly.

In August 1973, Lenny Welch covered Since I Don’t Have You. It was already an oft-covered song, that had given The Skyliners a hit in 1959. Since then, many artists had released their version. Lenny Welch’s is a cut above most covers. Against an orchestrated arrangement, Lenny Welch delivers a vocal that’s full of sadness, emotion and melancholy.

The Dramatics made the switch from Stax to Mainstream Records were The Dramatics. They had enjoyed critical acclaim and commercial success at Stax. This includes a number one single, In The Rain in 1972. Three years later, in 1975, the lineup of The Dramatics that signed to Mainstream Records was much changed. Only two of the original members remained. Despite this, No Rebate On Love gave The Dramatics’ a hit single on Mainstream Records. Tucked away on the flip-side is Feel It, which was penned by Jimmie Abston and Stella Petty. Leonard Jones took charge of production. He’s responsible for a beautiful Philly inspired ballad, that’s reminiscent of Thom Bell’s production style. Having said that, Feel It is a truly timeless and beautiful ballad.

Sandra Phillips closes Super Duper Love-Mainstream Hits and Rarities 1973-76 with I Need You Back Home. It was the B-Side to the 1975 single Miss Fatback, which was released on Black Black Dog. Need You Back Home was written by Fred Weekes and Gregory Carmichael, who took change of production. He’s responsible for a soul-baring Deep Soul ballad, that showcases another of soul music’s best kept secrets, Sandra Phillips.

That’s part of the story of Super Duper Love-Mainstream Hits and Rarities 1973-76, which was recent released by Kent Soul, an imprint or Ace Records. It’s features twenty-four tracks from Mainstream Records and its various imprints. Among the artists on the compilation, are many familiar faces and a few names. They sit side-by-side on a compilation that oozes quality. No wonder.

Linda Perry, Lenny Welch, Sandra Phillips, Calvin Arnold, J.G. Lewis, Doris Duke, Darlene Jackson, The Dramatics and Ellerine Harding are just a few of the artists on Super Duper Love-Mainstream Hits and Rarities 1973-76. They’re responsible for deeply soulful songs. This includes ballads and uptempo love songs. There’s everything from songs about betrayal and love to lost, to hurt and heartache, through songs about new love, where there’s hope for the future together. Many of these tracks are guaranteed to tug at the heartstrings. Some will cry while others will make the listener laugh. Each and every one of these songs on Super Duper Love-Mainstream Hits and Rarities 1973-76 are of the highest quality. As a result, Super Duper Love-Mainstream Hits and Rarities 1973-76 is the perfect companion to Mainstream Modern Soul 1969-1976 which Kent Soul released earlier this year. These two compilations are the perfect introduction to the soulful side Bob Shad’s Mainstream Records. 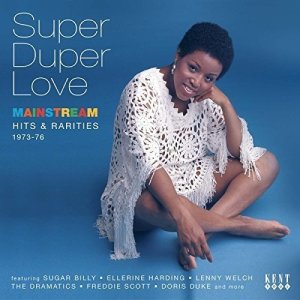 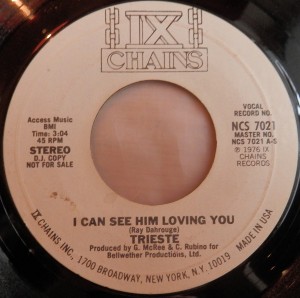 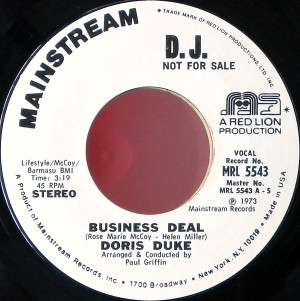 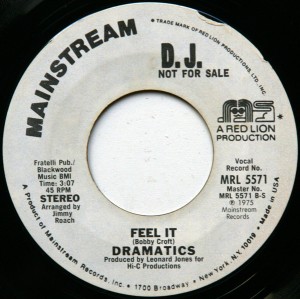 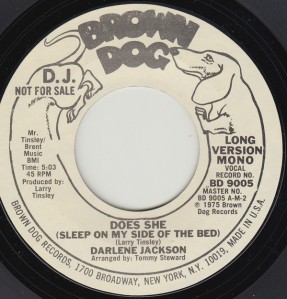 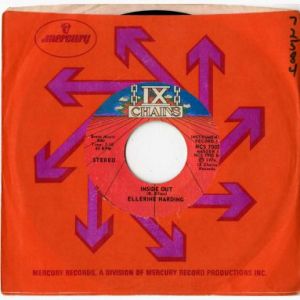