In 1967, twenty year old Miroslav Vitous was playing alongside Clark Terry in a Chicago club. It was just the latest gig for the up-and-coming Czech bassist. He had made America his home in 1966, when he won a scholarship to study at Berklee College of Music, in Boston. Now he was putting into practise everything he had learnt at the Prague Conservatory and then Berklee College of Music. As he played, Miroslav Vitous didn’t see a familiar figure in the audience…Miles Davis.

After the set finished, Miroslav Vitous was approached by Miles Davis. After introducing himself and complimenting him on his performance, Miles Davis told Miroslav Vitous how his band had been booked to play at The Village Gate for a week during August 1967. However, his regular bassist, Ron Carter was unavailable. Would Miroslav be willing to deputise for Ron Carter at The Village Gate? This was a huge break for the young bassist.

Just under a year later, the lineup of Miles Davis’ band began to change. Bassist Ron Carter left. Not long after his departure, Miroslav received a call from Miles Davies. By then, his music was changing, and moving towards fusion. Within this new sound, Miles Davis envisaged the bass playing just “repetitive motifs.” This was  a very specific and disciplined role. Miroslav wanted more freedom and to be able to express his creativity.The two musicians were on different pages musically. As a result, Miroslav Vitous proved to be just a temporary replacement for Ron Baker until Miles Davis could secure the services of Dave Holland.

After leaving Miles Davis’ employ, Miroslav Vitous’ services were in demand. He joined Stan Getz’s band, which included tenor saxophonist Chick Corea. This proved to be a another lucky break for Miroslav.

Not long after this, Chick Corea got the chance to record an album for the Solid State label. He decided to record to put together a trio. Its lineup included Chick Corea, Miroslav Vitous and drummer Roy Haynes. They recorded Now He Sings, Now He Songs, which was released to critical acclaim later in 1968. Nowadays, Now He Sings, Now He Songs is regarded as one of the most important and influential trio albums.

Later in 1968, Miroslav Vitous joined Roy Ayers when he was recording Stoned Soul Picnic. This was just the followup to Virgo Vibes, which had found favour with critics. So did Stoned Soul Picnic, with its fusion of soul and jazz. It was released in 1968, the same year Miroslav Vitous made his recording debut as part of flautist Herbie Mann’s band.

Having joined Herbie Mann’s band in 1968, Miroslav Vitous made his debut on Windows Opened. When it was released in 1968, it was hailed a classic. The following year, Herbie Mann released Live At The Whisky A Go Go in 1969. Miroslav Vitous and Roy Ayers were part of the band on this memorable live album. It was just one of the albums Miroslav Vitous played on during 1969.

Among the others were Jack DeJohnette’s eclectic and genre-melting album The DeJohnette Complex. It was released in 1969. So was Wayne Shorter’s Super Nova. Miroslav Vitous was chalking up the credits and proving the go-to-guy for anyone looking for a bassist. However, Miroslav Vitous was looking beyond a career as a sideman, and one as a solo artist.

The opportunity arose when Herbie Mann was setting up his Embryo Records label. He had managed to secure a distribution deal with Atlantic Records. Now, Herbie Mann began adding to Embryo Records’ small roster. One name he was keen to add the roster was Miroslav Vitous.

That was how Miroslav Vitous found himself making his way to A&R Studios, New York in November 1969. That was where Herbie Mann was waiting to produce his debut album. It’s an album that would eventually be released under three different titles. This includes The Bass, which was recently remastered and rereleased by BGO Records. It was the album that Herbie Mann hoped would launch the career of the Miroslav Vitous.

He was already more than a musician. Miroslav Vitous was also a composer, and had written most of his debut album. This included Mountain In The Clouds, Epilogue, Infinite Search, I Will Tell Him On You and When Face Gets Pale. The only composition that Miroslav Vitous decided to cover, was Eddie Harris’ classic Freedom Jazz Dance. It would prove the perfect showcase for Miroslav Vitous’ all-star band.

Despite being a month short of his twenty-second birthday, some of the biggest names in jazz accompanied Miroslav Vitous on Bass. That was no surprise. He was already an experienced and well respected musician. Miroslav had played alongside Miles Davis, Stan Getz, Roy Haynes, Chick Corea, Roy Ayers, Herbie Mann and Jack DeJohnette, and had more than held his own musically. So when it came to putting together a band, Miroslav was able to choose from the creme de la creme of jazz,

They joined Miroslav Vitous and producer Herbie Mann at A&R Studios, in New York. This included drummer Jack DeJohnette, whose album The DeJohnette Complex Miroslav had played on. Jack DeJohnette slotted into the rhythm section alongside This included one of the musicians Miroslav Vitous had played alongside bassist Miroslav Vitous and guitarist John McLaughlin. They were augmented by Herbie Hancock on electric piano and tenor saxophonist Joe Henderson. During the session, Joe Chambers was brought in to deputise for Jack DeJohnette on When Face Gets Pale. For the rest of the recording, the band remained unchanged. Backed by such an experience and talented band, and with Herbie Mann taking charge of production, the album was soon complete.

As the sixties gave way to the seventies, Herbie Mann’s Embryo Records began preparing for the release of Miroslav Vitous’ debut album in spring of 1970. By then, Miroslav had decided to name his debut album Infinite Search. It featured six of the tracks that had been recorded, Freedom Jazz Dance, Mountain In The Clouds, When Face Gets Pale, Infinite Search, I Will Tell Him On You and Epilogue. Before the release of Infinite Search, copies of this carefully sequenced album were sent to critics.

They lauded Infinite Search, which hailed as an ambitious, progressive and innovative album. Accompanied by some of the biggest names in jazz, bandleader Miroslav Vitous pioneered the nascent fusion sound. To do this, he combined fusion with elements of free jazz, modal jazz and a hint of bebop. There’s a fluidity, invention and energy to the all-star band’s playing. Other times, the rhythm section probe or drive the music forward, as they play with an urgency. Sometimes, the music is rhythmic, dramatic or melodic. However, other times, the music is thoughtful, understated, languid and mellow. Infinite Search was a captivating and groundbreaking album that showcased the nascent fusion sound.

That was the apparent from the opening bars of Eddie Harris’ Freedom Jazz Dance through to the closing notes of Epilogue. Miroslav Vitous gave his audience a foretaste of the new fusion sound that saved jazz from obscurity and irrelevance.

Accompanied by critical acclaim, Infinite Search was released in the spring of 1970. The album wasn’t a huge seller, but found an audience within the jazz community. Especially those who had latched onto the emerging fusion sound. It was already growing in popularity.

Instead, they decided to give Infinite Search a new title. It became The Bass. The track listing was also totally resequenced. That wasn’t the end of the changes. A seventh track was added, Cerecka to The Bass. By now, it was a very different album.

Just like two years earlier, The Bass was released to critical acclaim and found an audience within the jazz and fusion communities. This groundbreaking album had found a new audience for the second time.

That was no surprise. Fusion was still popular in 1972, and Miroslav Vitous continued to pioneer the genre. He was enjoying a successful solo career and was still a member of Weather Report until 1974. By 1976, fusion was no longer as popular.

Despite this, Warner Bros decided to released The Bass in Europe in 1976 as Magical Shepherd. To give the album broader appeal, a bonus track was added, New York City. Its disco-tinged sound was meant to appeal to dancers and DJs. Alas, that wasn’t the case and Magical Shepherd wasn’t the success that Warner Bros. had hoped for.

Despite this, The Bass was still a groundbreaking album, and one that pioneered the nascent fusion sound. Forty-five years later, and The Bass is regarded quite rightly regarded as innovative and influential fusion classic. Not only did The Bass launch Miroslav Vitous solo career, and helped popularise fusion, it ensured that jazz remained relevant and saved it from potential obscurity. 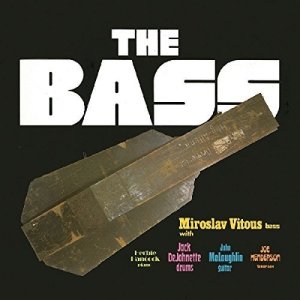