Sometimes, despite their undoubtable talent, a group fails to make the impact their talent and music deserves. It’s only, much later, that critics and record buyers belatedly  realise how innovative a group they were. That was the case with The Stained Glass, who originally, started life as The Trolls. They were without doubt, way ahead of their time. Sadly, record buyers neither understood, nor appreciated The Stained Glass’ music.  It pass record buyers by, and as a result, The Stained Glass split-up in 1969, just four years after they were formed in 1965.

Nowadays, critics, cultural commentators and record buyers realise and appreciate the importance of The Stained Glass’ music. They were musical pioneers, who could and should’ve  enjoyed commercial success and critical acclaim . Sadly, it wasn’t to be, in 1967, the dream was over for one of San Francisco’s seminal lost group’s. Things had been very different just two years previously.

The Stained Glass’ story begins in San Jose in 1964. Rodger Hedge had just started at San Jose University. He’d arrived from Southern California, where he’d played bass and guitar in the Sen-Sa-Shuns. They were a successful band, who’d supported the Righteous Brothers and Beach Boys. Opening for the Beach Boys must have been ironic, as Rodger had auditioned as their bass player. That wasn’t to be. He enjoyed a successful period in the Sen-Sa-Shuns. That gave him a taste of what a career as a musician would be like. So, on arrival at University, Rodger decided to form a band. He advertised locally, and straight away, Jim McPherson answered the advert.

Jim was a native of Chicago, and was studying radio and television journalism at San Jose University. Originally, he was a bassist, but when he realised how good Rodger was, switched to rhythm guitar. The next member to join the band was drummer Dennis Carrasco.

Dennis was recommended by Barry Wineroth of The Jaguars. He tipped Rodger and Dennis off about this musical prodigy. Unlike Rodger and Jim, Dennis was a native of San Francisco, but had lived in San Jose since 1960. He was younger than his prospective bandmates. In fact, he was still at Blackford High School. The age gap didn’t matter. As a drummer, Dennis was one of the best in San Jose. He’d started off playing in marching bands and after that, was working with The Stratatones and Blue Flames. With the Blue Fames, Dennis recorded some sessions. None of them were ever released. Now his luck looked like changing. Before that, they needed another member.

Although Rodger Hedge was a good guitarist, the band felt they needed another guitarist to play lead guitar. There were two candidates. One was John Sharkey, of the local group Syndicate Of Sound. The other was Bob Rominger, who’d recently moved to San Jose from Albuquerque, Mexico. He was a talented player, capable of unleashing some flashy licks. There was a problem though. Bob had only played in pickup bands. Despite that, he got the gig as lead guitarist. The band was complete. All they needed was a name. They hit upon The Trolls.

From their early days, The Trolls found work easy to come by. Originally, The Trolls played around the San Francisco area. Having established a reputation as a talented and popular band, they started playing further afield. Their performances featured mostly cover versions, with Rodger and Jim sharing lead vocal duties. Then after a while, The Trolls started adding their own original material.

Jim McPherson was The Trolls’ songwriter. He was influenced by the British invasion groups. The Kinks, Beatles, Animals, Rolling Stones and Zombies inspired Jim as a songwriter. So did Paul McCartney, who Jim admired, for the way he structured songs. This seemed to rub off on Jim. However, Jim’s songwriting style is more like Bob Dylan. Perceptive, descriptive, surreal and left-field describes Jim’s songwriter. He was part poet and philosopher. Occasionally, Rodger pitched in with a song, Mostly, it was Jim who wrote The Trolls’ songs. This includes the first songs they recorded.

The two songs chosen were the ballad How Do You Expect Me To Trust You and the harmonica driven Walkin’ Shoes, with its surreal, enigmatic lyrics. There’s still a British Invasion influence, on Walkin’ Shoes. With lyrics that sound like a homage to The Kinks, a bluesy Rolling Stone sound, especially with the harmonica, The Trolls seemed to have decided if you can’t beat the British Invasion groups, join them. However, apart from some radio play on local radio, The Trolls debut single passed almost unnoticed.

Despite their single failing commercially, The Trolls were one of the most popular live bands. They’d captured people’s imaginations and were winning them over with their mixture of covers and new songs. Despite their popularity, when The Trolls played in the Bay Area Battle of The Bands, it was to a disappointingly small audience. However, there was one man in the audience that would play a part in The Trolls’ future, Rene Cardenas.

Until Rene Cardenas saw The Trolls at The Battle of The Bands, he’d been publishing manager for Trident Productions. Having seen The Trolls live, he decided  to form his own company, Jackson Square Productions. The date was 25th April 1966. That day, Rene Cardenas promised to get The Trolls signed to a label. Two weeks later, The Trolls were on their way to Columbia’s Sunset Boulevard Studios, where they’d work with respected arranger Bernie Krause.

At Sunset Boulevard Studios, Bernie Krause helped the band hone their material. He made a number of suggestions, including changing some of the lyrics to Broken Man, a fusion of pop, psychedelia and blues. The other tracks recorded were Second Day and Lonely Am I, which was penned by Bob Rominger. Following the sessions at Sunset Boulevard Studios, The Trolls made a decision that could’ve had a huge impact on their career. They changed their name.

Even after the change of name, The Stained Glass were busy. The Bay Area had many venues, all of which were on the look out for popular bands. A popular band meant a full venue and profitable night. Gradually, The Stained Glass found themselves playing to an older audience. Granted they were still playing to younger people, but mostly, their audiences were older. This suited their baroque infused fusion of pop and psychedelia. The Stained Glass were opening for bigger bands and it looked like a breakthrough was imminent. It wasn’t. The deal with Columbia wasn’t going to happen.

At RCA Victor’s New York studio, The Stained Glass recorded My Buddy Sin. Best described as a baroque tinged track, it’s an example of Jim McPherson’s songwriting skills. The band’s songwriter in chief had done it again. Vanity Fair, The B-Side, is an underrated track. Influenced by The Kinks and Beatles, pop and psychedelia combine on a three minute slice of pop perfection. So good is this track, it could’ve come from the pen of Ray Davies. When the single was being recorded, the group didn’t like My Buddy Sin. They felt the addition of the harmonica spoilt the track. It, they felt, took the edge of the song. On its release, in September 1966, My Buddy Sin failed to chart. It would be another five months before The Stained Glass entered the studio.

When The Stained Glass entered the studios in February 1967, they realized what being signed to a record company entailed. RCA Victor wanted them to record songs by other songwriters. None of them were suitable. Then they hit upon We Got A Long Way To Go, which was penned by Barry Mann and Cynthia Weil. It was totally different to the type of songs the group usually recorded. During recording effects were used to create feedback and sustain. This is very different from previous singles. There’s still a psychedelic sound as pop and rock combine. Full of  hooks, would this be The Stained Glass breakthrough single?

On the release of A Long Way To Go, with Corduroy Joy on the B-Side, it didn’t result in the elusive hit single for The Stained Glass. Not long after this, with the lack of success frustrating the band, Rodger Hedge, who’d founded the band was asked to leave. This marked the beginning of the end for The Stained Glass.

Their final single was Mediocre Me, with The Beatles’ inspired A Scene In-Between on the B-Side. Both were penned by Jim McPherson. Sadly, the single failed to chart nationally, but reached number six on KDON’s chart. That’s a small crumb of comfort for one of San Francisco’s most innovative and pioneering groups. Not long after Mediocre Me’s release RCA Victor didn’t renew The Stained Glass’ contract.

This proved to be a blessing in disguise. The Stained Glass signed to Capitol Records and released two critically acclaimed albums. Their debut was Crazy Horse Roads, which was released in 1968. However, disaster struck just before the album was finished. Bob Rominger left the band. For The Strained Glass, this was a blow. Despite this, the album was completed and ready for release later in 1968.

Despite critics lavishing praise on Crazy Horse Roads, the album failed commercially. For The Stained Glass, this was another huge disappointment. They were down, but not out and later, began work on their sophomore album. However, the times and lineup was changing.

Joining were  keyboardist and guitarist Lance Libby, percussionist Louie Schiavo and In 1969, Bob Rominger left after and was replaced by southpaw guitarist Tom Bryant. He was a member of The Stained Glass when they recorded their sophomore album Aurora. It was released to critical acclaim in 1969 but failed commercially. After that, The Stained Glass changed their name to Christian Rapid and spent the next three years touring. They never recorded another album. Aurora marked the end of the The Stained Glass’ story.

Many of the songs were written by the enigmatic poet philosopher Jim McPherson. He too was influenced by the British Invasion groups. His lyrics are pensive, perceptive, descriptive, surreal and cryptic. Influenced by Ray Davies,  Paul McCartney and Bob Dylan, Jim could’ve and should’ve been a hugely successful songwriter. Sadly, just like The Trolls and The Stained Glass, Jim McPherson’s talents went unnoticed for too long. Now a new generation have discovered the music of The Trolls and then The Stained Glass, who between 1965 and 1967, were one of San Francisco’s most innovative lost groups. 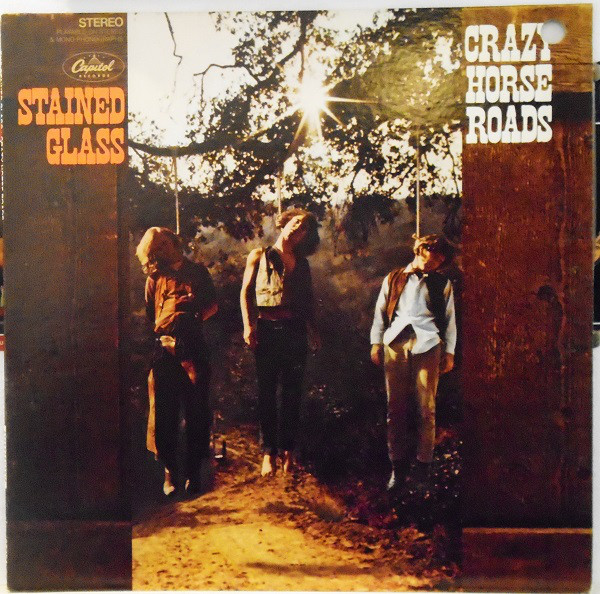 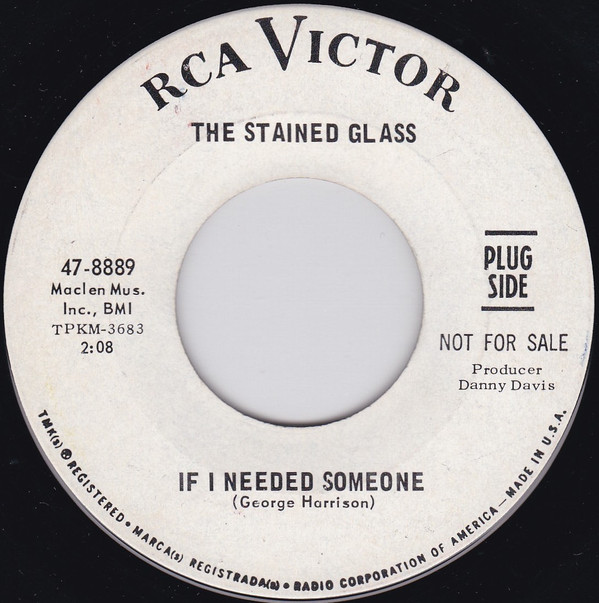 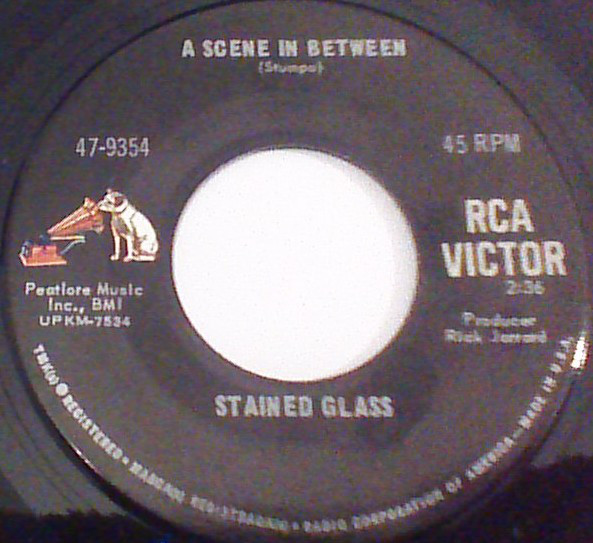 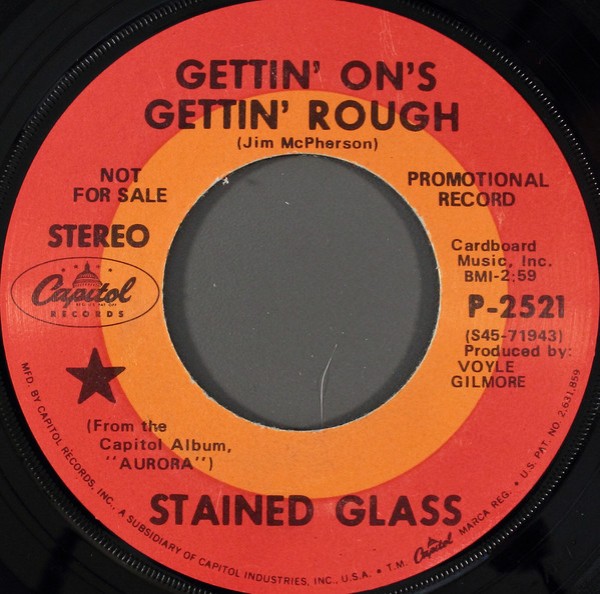