Triangle is Susanna’s eleventh album and first for four years. It was released on Susanna’s own SusannaSonata label, and is no ordinary album. Not by a long chalk. Instead, Triangle is a twenty-two song cerebral epic, where Susanna muses and meditates on mortality and religion.  It’s a powerful album, that invites reflection and introspection.

As she does, the music on Triangle is variously beautiful, cinematic, emotive, expressive, heartfelt and hopeful. Especially as Susanna’s vocals take centre-stage. She breathes life, meaning and emotion into the lyrics on Triangle. Susanna is at her best on the ballads as she delivers a series of vocal masterclasses. Other times, the music on Triangle changes, becoming dark, melancholy and wistful. This is part of what’s a captivating and cerebral album, Triangle. Its ruminative and invites reflection and introspection on Susanna musings on mortality and religion. The result of Susanna’s musings can be found on Triangle, and are what she describes as: “music for lost souls,” where “nothing is holy, nothing is sacred.”

After a six year absence, Glasgow’s very own Kings of jangle pop, Teenage Fanclub returned with their much anticipated tenth album, Here. It was the long awaited followup to 2010s Shadows. Since then, the members of Teenage Fanclub have been spending much of their time working on various side projects. Eventually, the call came, and everyone returned to the mothership, Teenage Fanclub. That has been home to the Bellshill boys since 1989. This homecoming was going to be special.

From the opening bars of I’m In Love, right through to the closing notes of Connected To Life, Teenage Fanclub never put a foot wrong. The songs are anthemic, beautiful, joyous, melodic and sometimes, even have a melancholy quality. Other times, the songs are dreamy, rocky and ruminative. Always, though, the songs on Here are memorable as Teenage Fanclub roll back the years.

Having formed in 2010, The Cosmic Dead didn’t waste time in recording and releasing their eponymous debut album. It was released in 2011, and was a fusion of space rock, Krautrock and psychedelia. The Cosmic Dead showcased a group who channelled the spirit of Hawkwind and Ash Ra Tempel. This won the approval of the record buying public. So have the other albums The Cosmic Dead have released. This includes Rainbowhead.

Rainbowhead features Glaswegian groove-meisters The Cosmic Dead at their hard rocking best. They kick loose from the opening bars of  Human Sausage, and never let go until the closing notes of Rainbowhead. In between you’re treated a glorious assault on the sensory system that unleashes endorphins aplenty. This comes courtesy of those genre-melting innovators The Cosmic Dead, and their latest critically acclaimed album Rainbowhead. It’s a career defining album from The Cosmic Dead, and shows that they’re destined to join the elite of Scottish music. 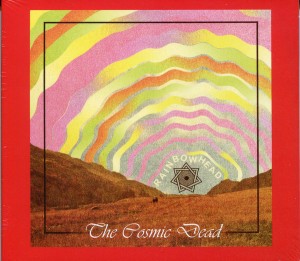 The Magnetic North-Prospect Of Skelmersdale.

Prospect Of Skelmersdale released their sophomore album Prospect Of Skelmersdale on Full Time Hobby last year. It wasn’t an easy album to write. After a false start, The Magnetic North retired to Eskdale, where Simon Tong had holidayed as a child. That was the start of a search for musical inspiration. The Magnetic North left no stone unturned. They studied old news stories; the town’s modern history; relied upon distant memories and even drew inspiration from road signs and graffiti. Gradually, Prospect Of Skelmersdale took shape. Its songs told the stories of the hope that imbued the new town’s arrivals, and the desperation of those who wanted to leave. That’s the case with Skelmerdale, and all of the other new towns that were created in 1961.

In a way, Prospect Of Skelmersdale tells their story too.  It’s a powerful musical document, and one that The Magnetic North realise, will become a sonic time-capsule. It documents a time and place in a town’s history. This musical document, Prospect Of Skelmersdale was created by musicians turned historians, The Magnetic North.

They have created another carefully crafted album that’s variously beautiful, elegiac and ethereal and cerebral, cinematic and melodic. For those yet to discover the delights of The Magnetic North, then Prospect Of Skelmersdale  is the  perfect starting place and is a tantalising taste of what the talented trio are capable of.

Future Echoes finds The Pictish Trail combining elements of disparate genres, and weaving them into a musical tapestry. To do this, The Pictish Trail fuses folk, indie pop, dance music and electronica. Other ingredients include indie rock and even psychedelia. They become Future Echoes, an album where ballads and uptempo songs side by side. Together, they create a potent and heady musical brew. It’s akin to a journey on an emotional roller coaster.

During that journey, the songs on Future Echoes are beautiful, catchy, joyous melodic and memorable. Others are cinematic, dark, dramatic and melancholy. Very occasionally the darkness descends, and on Far Gone (Don’t Leave) the lyrics make for uneasy listening. Sometimes, The Pictish Trail heads into anthem territory, and his hook-laden songs prove irresistible. Other times, he showcases his versatility on Future Echoes’ ballads. Transformed into a balladeer, The Pictish Trail breaths meaning and emotion into the lyrics. They’re a reminder that The Pictish Trail, whose one of Scottish music’s best kept secrets, is a versatile and talented singer who seems to mature with age.

The Pyramids-We All Be Africans.

In 2011, The Pyramids reunited. Some of the original members of The Pyramids were augmented by new names. This mixture of the old and new, recorded and released The Pyramids’ album Otherworldly. It was released in 2011, to critical acclaim. Since then, The Pyramids have embarked on seven tours, but have yet to release a new album. That was until The Pyramids  released We Be All Africans  on Strut Records

From the opening bars of We All Be Africans, which is a truly irresistible and joyous track, Idris Ackamoor and The Pyramids have the listener spellbound. Over the next six tracks, they combine elements of Afrobeat, avant-garde, free jazz, funk, fusion, jazz and soul. This genre-melting album features music that’s celebratory, melancholy, mesmeric, reflective and uplifting. Other times, the music is beautiful, cinematic, heart-wrenching and sombre. Always, the music on  We All Be Africans provokes an emotion, and is guaranteed to makes the listener think. Not many albums do that. 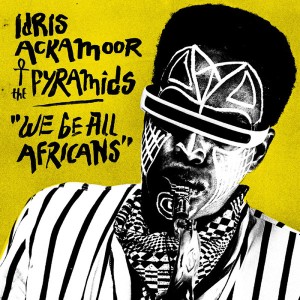 They literally strut and swagger their way through White Bear, creating music that’s anthemic, hook-laden, melodic and nine times out of ten, always rocky and memorable. The Temperance Movement don’t ration hooks, as they follow in the footsteps of The Faces, Led Zeppelin, Rolling Stones and Black Crowes on what’s a career changing album, White Bear.

The Trondheim Jazz Orchestra, Kim Myhr and Jenny Hval-In The End His Voice Will Be The Sound Of Paper.

The music is beautiful, ethereal, melodic and mesmeric, but also captivating, dramatic, melancholy and otherworldly. Always, the music is innovative, with surprises in store for the listener. Almost seamlessly, avant-garde, Feldmanian music, folk, free jazz, improvisational music and even elements of pop shine through.The Feldmanian, folk and pop influences come courtesy of one of Norway’s finest vocalists, Jenny Hval. Her voice is variously beautiful, despairing, elegiac, emotive, heartfelt and wistful. Sometimes, her vocal is transformed into what’s akin to a musical instrument. When this happens, Jenny joins The Trondheim Jazz Orchestra and Kim Myhr in creating a truly captivating album.

It’s also an album that’s full of subtleties, surprises and nuances. That’s why it’s an album that one will never tire of. Another is the music is innovative. The Trondheim Jazz Orchestra, Kim Myhr and Jenny Hval push musical boundaries to their limits, and continually combine musical genres in the pursuit of musical excellence throughout  In The End His Voice Will Be The Sound Of Paper. They certainly succeed in doing so.

Not many bands are still together after thirty years. Most bands  split-up long before then. Not Irvine’s finest indie rockers, the Trashcan Sinatras. They’re survivors, who have lived through the bad times and survived to tell the tale. Trashcan Sinatras also released a new album during 2016, Wild Pendulum on Red River Entertainment.

William Fitzsimmons heeded Mark Twain’s advice tp: “write about what you know” on Charleroi: Pittsburgh Volume 2, which was released by Gronland Records. It tells a truly poignant and moving story of  how William’s grandmother took her son to the hospital, suffering from whooping cough. Although the baby recovered, his mother never returned and after seven months was adopted by a doctor in the hospital.

The story unfolds during six carefully crafted songs. They feature mostly subtle, sparse and understated arrangements. These arrangements frame William’s vocal, which quite rightly, takes centre-stage. William’s vocals are heartfelt, and full of emotion, sadness, regret and melancholy. So are his lyrics. They range from between  beautiful, melancholy and poignant, to thoughtful and moving. It’s impossible not to be moved by the lyrics  which have a cinematic quality.

So much so, that it’s almost possible to imagine the story unfolding before your eyes. The seventeen year old giving up her baby, and spending the rest of her life wondering what became of it? Similarly, one can image William’s father constantly wondering what happened to his mother? Eventually, it emerged that William’s grandmother died alone in a motel room just a few years before. Neither William, nor his father met Thelma.  However, William decided to tell Thelma’s story on Charleroi: Pittsburgh Volume 2. It’s a personal, poignant and moving album from William Fitzsimmons, where he tells the story of the grandmother he never knew on Charleroi: Pittsburgh Volume 2.

Yuri Gagarin-At The Center Of All Infinity.

From the opening bars of The New Order, to the closing notes of Oblivion, it’s an almost flawless performance from Yuri Gagarin. They combine elements of classic rock, heavy metal and psychedelia with Yuri Gagarin’s unique brand of space rock. It’s fast, frenetic and melodic, as five hugely talented musicians showcase their considerable skills and versatility. Stealing the show are Yuri Gagarin’s guitarists, Crille and Jon. They both play starring roles. However, it’s lead guitarist Crille who gets more opportunities to shine. When he does, he grabs them with both hands, and unleashes a series of blistering, scorching, searing solos. They play an important part in the sound and success of Yuri Gagarin’s career defining album, At The Center Of All Infinity.