Five years after releasing their critically acclaimed debut album No Fiction Now!, Fiium Shaarrk are about to return with their long awaited and much anticipated sophomore album We Are Astonishingly Lifelike. It’ll be released by the Not Applicable label on the 3rd of March 2017, and marks the return of the pioneering trio Fiium Shaarrk.

Anyone whose heard  Fiium Shaarrk debut album No Fiction Now! realises that they’re no ordinary group. Far from it; Fiium Shaarrk are a group who do things their way. They make music that’s variously ambitious, cerebral, challenging innovative and visceral. That is no surprise given the different backgrounds of the three members of Fiium Shaarrk.

Drummer Rudi Fischerlehner was born in Austria in 1977, and is a vastly experienced musician. He’s worked with a variety of artists, and has been a member of various different bands over the past three decades. This includes Blendwerk, Pinx, Grid Mesh, Shoot The Moon, Erste Stufe Haifisch, Sound 8 Orchestra and Peter Van Huffel’s Gorilla Mask. Rudi Fischerlehner has also collaborated on several successful albums. Two of these albums, Rupp, Müller, Fischerlehner’s 2013 album Tam and Frank Paul Schubert and Rudi Fischerlehne’s 2015 album Willing Suspension Of Disbelief were released on the Not Applicable label. It’s co-owned  by another member of Fiium Shaarrk.

Each member of Fiium Shaarrk was brought their own previous musical experience onboard when they recorded We Are Astonishingly Lifelike. Fiium Shaarrk are musical pioneers, who are determined to record music that’s ambitious, challenging and innovative. They see themselves as following in the footsteps of Karlheinz Stockhausen, Edgard Varèse and Luciano Berio as they draw inspiration from a myriad of disparate musical genres. This includes batucada, dub, drum ’n’ bass and post rock. These various influences were combined over a two year period.

Recording took place between 2013 and 2015 as Fiium Shaarrk toured Europe playing at festivals and concerts. When Fiium Shaarrk  had some downtime, they headed into a local studio and recorded a series of seven soundscapes the band had composed. They were recorded in studios Aarhus, Berlin and London.

The cinematic sounding Conundrums opens We Are Astonishingly Lifelike. Straight away, a myriad of electronic sounds propel the soundscape along. It’s like being onboard a boat. Especially as machinery whirrs before chimes are joined by ominous sounding drums. By now, it’s  as if the boat is trying to escape. Worryingly, a military beat plays before beeps and squeak escape from the arrangement. It’s as if they’re sending out an SOS. Still the military beat plays, adding a dramatic, cinematic sound. Later, there’s a another attempt to send out the SOS. However, the military beat is omnipresent and takes centre-stage. Despite this, beats, beeps, buzzes and percussion escape from the arrangement as the boat bids to make its escape. There’s now a sense of urgency as the tempo rises and the soundscape replicates the sound of man and machine in perfect harmony  as they take flight during this captivating cinematic soundscape.

Gustav (The Stuffed Red Panda) is an ambitious, genre-melting soundscape. It’s understated as it unfolds. Drumbeats crack and are joined by rim shots, hissing hi hats  and percussion. They flit in and out. So do jarring strings and a series of found and manipulated sounds. Some are instantly recognisable, while others seem to have been transformed by effects. Later, a myriad of beeps, squeaks, buzzes and bubbling sound are added to the musical melting pot. So are electronic drum beats, bursts of feedback, clicking, cracking percussion and drones. The drones join drums, percussion and an array of electronics as Fiium Shaarr improvise and sculpting this genre-melting soundscape. It’s grown in power and the understated sound has disappeared. It’s now a challenging mass of musical influences and genres. Elements of avant-garde, electronica, experimental, improv, industrial and post rock are combine by Fiium Shaarrk as they push musical boundaries to their limits and beyond.

There’s an industrial sound as buzzes, beeps and crackles accompany Fiium Shaarr in full flight on The Last Common Sense. Drums pound and power the soundscape along. When they drop out while percussion and electronics take centre-stage adding cinematic, futuristic and an ethereal vocal. Thunderous drums, synths strings and washes of synths join with chiming, chirping sounds. All these sounds assail the listener, before they disappear and sometimes reappear. By then, synths and drums are to the fore, and play a starring role. Laterally, Fiium Shaarr throw a curveball and march to the beat of a military drumbeat, before the music becomes understated and futuristic. It’s been a magical musical mystery tour, that features music that’s variously beautiful, dramatic, melodic, mesmeric and always, captivating.

Beeps and squeaks tap out a code as drums and then electronics feature on All The Awe Leans. Soon, a stab of piano and synth are added as like snarling and gnawing sounds join beeps, squeaks and drums. At one point, all that remains are the snarling and gnawing sounds. Then the drums, electronic, percussion return. Only very briefly though: they drop out, and all that remains is an  understated soundscape. All that can be heard are gnawing, cheeping, beeping sounds. Before long, Fiium Shaarr return and fuse avant-garde, experimental and free jazz on this chilling, dramatic and cinematic soundscape.

There’s a ruminative and eerie sound to Krypton Tunning. Synths, drones and electronics combine with drums and percussion. Gradually, the arrangement meanders along, before stabs of bass synth interject. This proves to be a  regular visitor, as the arrangement veers between understated to a much more uptempo, urgent sound. Sometimes, there’s a Latin influence to the percussion, while synths strings prove add uneasy sound to this captivating and melodic fusion of avant-garde, electronica and industrial music.

Straight away, there’s a dub influence to Bogan Sunrise. Drums crack as a myriad of sounds and electronics are added to the arrangement. It’s slow, dark and deliberate as grating, scraping and moody sounds emerge from the soundscape. So do a variety of found sounds and samples. Soon, percussion and sci-fi sounds are added. Meanwhile, jarring, whirring sounds emerge, and are joined by thunderous drums, a bass synth and industrial sounds. Later, the tempo briefly changes, before the inverted sounds and percussion are added and assail the listener. It seems that Fiium Shaarr are letting their imagination run riot, and create an inventive and dramatic soundscape which features surprises aplenty.

The Great Swimming Pool Of Liberation closes We Are Astonishingly Lifelike. A myriad of beeps, squeaks, buzzes and percussion scampers across the arrangement. They’re soon joined by rim shots, metallic percussion and stabs of synths. Together, they become part of an alternative, 21st Century symphony. So does the dark, moody sound of the bass synth which emerges from deep within the soundscape. By now, there’s an urgency as the instruments race across the arrangement. Having said that, it’s a compelling, dramatic and melodic soundscape. Otherworldly sounds, beeps and squeaks join futuristic and industrial sounds  as this musical merry-go-round reaches a captivating and crescendo. As it does, it’s hard to believe ten magic minutes have passed. Fiium Shaarr close We Are Astonishingly Lifelike on a high.

Five years after praise and plaudits greeted Fiium Shaarr’s debut album No Fiction Now!, the pan-European musical pioneers return with their long awaited and much anticipated sophomore album We Are Astonishingly Lifelike. Its about be released by the Not Applicable label on the 3rd of March 2017. Fiium Shaarr reach new and previously unreached musical heights on their genre-melting career defining sophomore album We Are Astonishingly Lifelike. 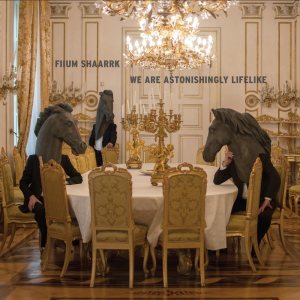