OREGON-OUT OF THE WOODS AND ROOTS IN THE SKY.

Oregon-Out Of The Woods and Roots In The Sky.

After releasing seven albums for Vanguard between 1972 and 1978, Oregon had signed to Elektra. The four members of Oregon knew that this was the opportunity of a lifetime. Elektra were one of the biggest record labels in the world, and had the marketing expertise and financial muscle to promote and distribute Oregon’s music worldwide. This was where Vanguard had struggled.

During the Vanguard years, Oregon had recorded ambitious and critically acclaimed albums. That had been the case since Oregon released their debut album Music of Another Present Era 1972. The only problem was that Vanguard seemed to struggle with distribution. Thinking that was a one-off, Oregon released their sophomore album Distant Hills in 1973. Again, there were problems with distributing the album. It was a similar case when Winter Light was released in 1974 and In Concert in 1975. The problems with distribution meant that Oregon’s albums weren’t selling well. As time passed, Oregon became frustrated with how they were treated at Vanguard.

Another thing that frustrated Oregon, was that when they were recording an album, they had to record at night, or when nobody else were using the studios. It wasn’t as if Oregon were an unknown band. They collaborated with drummer Elvin Jones on the album Together, which was released in 1976. Just like Oregon’s solo albums, there were problems with distributing the album. History repeated itself in 1977, when Oregon released their fifth solo album Friends. By then, the four members of Oregon were thinking about the future.

Given the problems with distribution and having to record at night, Oregon were thinking about changing label. Ideally, they wanted to sign to a major label when their contract with Vanguard expired. Before that, Oregon recorded two further albums.

This included Violin, a collaboration with Polish violinist Zbigniew Seifert, which was released in 1978. Oregon also recorded their sixth solo album  for Elektra Moon and Mind. However, by the time it was released in 1979, Oregon had signed to Elektra.

The deal with Elektra came about purely by chance. One day, Oregon’s accountant happened to be sitting next to an executive from Elektra, so gave one of the band’s albums. This was enough to set the ball rolling. When executives at Elektra heard the Oregon album, they liked what they heard and wanted to sign the band.For the four members of Oregon signing to Elektra was a game-changer.

Elektra was a major label, since its merger with Asylum. Not only Elektra had financial muscle and marketing expertise to introduce Oregon’s music to a much wider audience, but an enviable distribution network. This would get Oregon’s albums into shops not just across America, but much further afield. That sounded good to the members of Oregon, who certainly hadn’t gotten rich at Vanguard. The Elektra years were a new start for Oregon, who were keen to begin work on their ninth album, Out In The Woods, which was recently reissued with Roots In The Sky as a two CD set by BGO Records.

Out Of The Woods.

With the ink dry on the their contract with Elektra, the four members of Oregon, Ralph Towner, Paul McCandless, Glen Moore and Collin Walcott began work on what would eventually become Out In The Woods.

For Out In The Woods, the members of Oregon began writing and choosing the material for their Elektra debut. Each member of Oregon played their part in writing Out In The Woods. They wrote eight out of the nine tracks. Ralph Towner wrote Yellow Bell, Reprise, Vision Of A Dancer and Waterwheel; Collin Walcott wrote Dance To The Morning Star and Story Telling; Paul McCandless contributed Cane Field and Glen Moore wrote Fall. The other track that would feature on Out In The Woods was a cover of Jim Pepper’s Witchi-Tai-To. These nine tracks were recorded in Massachusetts with a familiar face.

Over the last few years, Oregon had produced their own albums.  They had worked with engineer David Greene several times. So when it came to recording Out In The Woods during April 1978, David Greene joined Oregon at Long View Farms, North Brookfield, Massachusetts. He helped Oregon prepare to record their major label debut.

The four members of Oregon used an array of traditional Western and Eastern instruments to record Out Of The Woods. Ralph Towner played classical guitar, twelve-string guitar, percussion, flugelhorn and piano. Paul McCandless switched between bass clarinet, bass clarinet and oboe. Collin Walcott played guitar, percussion, sitar and tabla. Glen Moore the fourth member of Oregon played bass during a recording session that lasted much of April 1978. Once Out Of The Woods was completed, it was mastered by Bob Ludwig, one of the top mastering engineers. Elektra were determined that Oregon’s Elektra debut would be a success.

Soon, Elektra’s PR machine got to work, promoting their latest signing’s new album. Out Of The Woods was scheduled for release later in 1978, so this left plenty of time to promote the album properly. Copies were sent out to critics on both sides of the Atlantic. They got the opportunity to hear what was a new chapter in the Oregon story, Out Of The Woods.

It was another genre-melting album of understated acoustic music from Oregon. They play with care and precision fusing elements of jazz with folk melodies what was then referred to as ‘New Age’ and ‘World Music.’ The latter was all-embracing term for  everything from African, Asian, Eastern and Latin music. Each member of Oregon were interested in and had been influenced and inspired by ‘World Music.’ That was apparent throughout Out Of The Wood. Especially the rhythmic nature of some tracks and the percussion that was deployed. Examples include Fall 77, Story Telling and Witchi-Tai-To, which are among the album’s highlights. So too are Yellow Ball and Vision Of A Dancer. Both showcase the considerable skills of Oregon, on an album where the music is beautiful, dreamy, ruminative and offers the opportunity for contemplation and refection. Always though, the music captivates and is timeless. Critics in 1978 agreed. 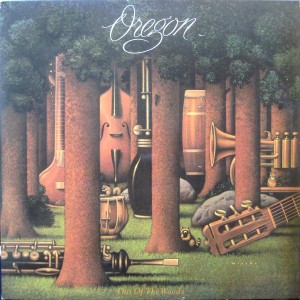 Roots In The Sky.

Buoyed by the success of Out Of The Woods, Oregon began work on what would be the tenth album of their career. Oregon had been a prolific band since they signed to Vanguard in 1972. It was only at Elektra that they were beginning to enjoy the fruits of their labour. Emboldened by the tantalising taste of commercial success they began writing Roots In The Sky.

Just like their previous albums Out In The Woods, Oregon had decided to produce Roots In The Sky. Again, Oregon brought engineer David Greene engineer onboard. He joined Oregon in the familiar surroundings of Long View Farms, North Brookfield, Massachusetts. He would help Oregon record the followup to what had been the most successful album of their career.

For the Roots In The Sky sessions, much of the instrumentation was used by Oregon. Bassist Glen Moore was joined by Ralph Towner, who played classical guitar, twelve-string guitar, flugelhorn percussion and piano. Paul McCandless played bass clarinet, English horn and oboe, while Collin Walcott played guitar, percussion, sitar and tabla. The recording began in December 1978 and lasted until April 1979. Once the album was completed, it was mastered by Bob Ludwig. Now Roots In The Sky was ready for release.

Roots In The Sky found Oregon combining their love of ‘World Music’ with elements of classical music and their first love, jazz. Sometimes, elements of free jazz and avant-garde can be heard. ‘World Music’ influences twas represented by African and Asian music. Both can be heard throughout Roots In The Sky. The African influence can be heard on Sierra Leone, while the listener is transported to India on House Of Wax. Then on Hungry Heart, Indian percussion combines with jazz to create a melancholy and ruminative backdrop. Orrington’s Escape is another mesmeric and captivating combination of Eastern influences and jazz. One of the most ambitious and rewarding tracks is Roots In The Sky. It’s a mesmeric, genre-melting track that heads in the direction of avant-garde and free jazz. Longing, So Long which closes Roots In The Sky is another thoughtful and atmospheric journey East. One of the best has been saved until last.

Not only Oregon had picked up where they left off on Out Of The Woods, on Roots In The Sky, but they moved forward musically. Different genres were incorporated into Roots In The Sky which became part of carefully woven musical tapestry. Roots In The Sky was another ambitious, innovative and compelling genre-melting album. The music was atmospheric, cerebral, cinematic, enchanting, meditative, ruminative and just like Out Of The Woods is guaranteed to result in contemplation and reflection. This should’ve built on the success of Out Of The Woods.

Especially considering the critically acclaimed reviews that Roots In The Sky received. However, when Roots In The Sky was released in October 1979, it failed to match the commercial success of Out Of The Woods. This was a huge disappointment for Oregon. 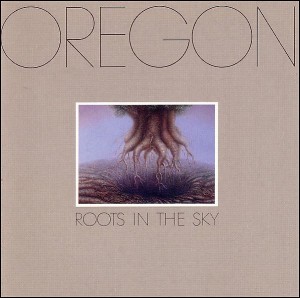 After Roots In The Sky, Oregon only released one further album for Elektra, In Performance in 1980. This live album marked the end of another era for Oregon.

The group was placed on hold for a couple of years, allowing the members of Oregon to work on other projects. During this period, Collin Walcott also became a father. By 1983, Oregon were ready to record again, and signed to ECM.

Collin Walcott was killed in a car accident on November ‘8th’ 1984, whilst Oregon were touring East Germany, The three remaining members of Oregon were badly affected by Collin Walcott’s death, as they had been friends for over twenty years. A memorial concert was held in May 1985, and after that, Oregon split-up. It looked Crossing would be Oregon’s swan-song.

In 1986, Oregon decided to reunite. Trilok Gurtu was invited to join Oregon, and they recorded and released their Ecotopia on ECM in 1987. It was Oregon’s swan-song for ECM.

Oregon signed to Portrait, an imprint of CBS and released 45th Parallel in 1987. Two years later, and Oregon signed to Intuition and released Always, Never and Forever in 1991. It proved to be Trilok Gurtu’s swan-song with Oregon. The band continued with and not long after this new percussionist Marc Walker.

Still, many people still remember the original lineup of Oregon, which featured four friends Ralph Towner, Paul McCandless, Glen Moore and Collin Walcott. This lineup recorded fourteen albums between 1972 and 1984. These albums were released on Vanguard, Elektra and ECM. However, the most successful of these albums was 1978s Out Of The Woods which was recently reissued with 1979s Roots In The Sky, by BGO Records as a two CD set. They’re the perfect introduction to Oregon, a truly talented group who never enjoyed the commercial success that their music deserved. That is a great shame.

Oregon were pioneers, who fused disparate musical genres and instruments to create ambitious, innovative and genre-melting music. A reminder of that is Out Of The Woods, which when it was released, was Oregon’s most successful album, and nowadays, is regarded as a jazz classic. Then when Oregon came to record Roots In The Sky, they used Out Of The Wood as a building block headed in new and different directions.

Just like on Out Of The Woods, Oregon fused African, Asian, and Indian music with classical and jazz. This is combined with elements of ambient, avant-garde and free jazz, especially on Roots In The Sky. The result was music that’s atmospheric, meditative, melodic, mesmeric, ruminative and spiritual. Both Out Of The Woods and Roots In The Sky invite contemplation and reflection and are rewarding and timeless albums that are a reminder of the original lineup of Oregon at their creative zenith.

Oregon-Out Of The Woods and Roots In The Sky.