“All things come to he who waits.” So said Violet Fane in her poem Tout vient ß qui sait attendre. That is very true. Especially for record buyers who spend a lifetime searching for obscure singles and LPs. After a while even the most determined crate digger is forced to admit defeat. Sadly, some singles and LPs are impossible to find, and the only way to hear them is if a record company decides to reissue the album or the singles as part of a compilation.

It’s the perfect introduction to what was an important era in American music. During the second half of the sixties, new bands were springing  up all over America, and recording singles like those that feature on Keb Darge and Cut Chemist Present Darkside: 30 Sixties Garage, Punk and Pysch Monsters. These singles were often released in small numbers by independent labels, and nowadays, are almost impossible to find. They’re the type of singles that Keb Darge and Cut Chemist are constantly searching for.

Keb Darge however, is a relative newcomer to this intriguing and obscure genre, and came across it almost by accident whilst looking for Northern soul singles. He remembers: “DJ Shadow told me I would like garage years ago, but I didn’t listen.” This was a big mistake, but one that would eventually, would be rectified.

Three years ago, some collectors of garage decided to try and introduce Keb Darge to garage. They spun Keb some 45s that they though he would like. That proved to be the case and soon, he was hooked to Garage. Since then, Keb Darge had been constantly crate digging, hunting for hidden gems, obscurities, rarities and elusive, hard to find singles. This was what another DJ that Keb knew had been doing for many a year, Cut Chemist.

Unlike Keb Darge, who was a relative newcomer to the genre, Cut Chemist was a veteran collector who had amassed an admirable collection of garage 45s over the years. Many of these singles were rarities, which nowadays, change hands for ever increasing sums of money. These singles are beyond the budget of most record buyers, and the only way most people will hear them if someone was to compile a compilation. That was what Keb Darge suggested to Cut Chemist one day.

By combining their respective collections, Keb Darge and Cut Chemist had more than enough music for one compilation of Garage. Indeed, the hardest thing would be narrowing down their long-list to a shortlist that would feature on one CD or LP. Eventually, though, a shortlist of thirty songs was drawn up, and became Keb Darge and Cut Chemist Present Darkside: 30 Sixties Garage, Punk and Pysch Monsters. It features obscurities, rarities and hidden gems and is the perfect introduction to the sixties garage music. Keb explains: “This compilation is not aimed at the many collectors of this wonderful style of music. I am a very late arrival on this scene, and still have a hell of a lot to learn, and buy. This is more for people like I was just three years ago, people oblivious to beauty, power, and excitement of the sixties garage sound.”

Choosing just thirty songs to introduce newcomers to the sixties garage sound can’t have been easy. Eventually, though, Keb Darge had chosen songs from Ty Wagner, The Banshees, The Deepest Blue, The Gentlemen, The Nobles, The Malibus, The Mach V, The Passions and Young Aristocracy. Meanwhile, Cut Chemist’s list included The Berkley Five, The Lyrics, The Spacemen, The Savoys, The Dogs, The Omens, The Chantes, The Spades, The Aventés and The Blue Velvets. These songs became part of Keb Darge and Cut Chemist Present Darkside: 30 Sixties Garage, Punk and Pysch Monsters.

Nowadays, many music fans regard Ty Wagner’s 1965 single I’m A No-Count as his finest hour. Coming a very close second is Slander, which was penned by Ty Wagner and produced by Don Ralke. Slander was released on the Era label in November 1966, and is an atmospheric and eerie slice of surf psychedelia.

Anyone wanting a copy of Teddy and His Patches’ Suzy Creamcheese will have to part with the best part of £250. It was released on the San Jose based Chance label in 1967, and was the only single that Teddy And His Patches released. However, if a band is only going to release one single, make it one as good Suzy Creamcheese. It’s a riotous fusion of psych and punk, that lysergic, ruminative and dance-floor floor friendly.

It wasn’t just blues and soul that was being produced in Windy City of Chicago during the sixties. Between 1966 and 1968, The Del-Vetts released a quartet of underrated singles. Their finest hour has to be Last Time Around, which was released on Dunwhich in June 1966. It’s a blistering example of proto-punk which deserved to find a much wider audience. Sadly, The Del-Vetts were way ahead of the musical curve.

From the get-go, The Deepest Blue’s Hammond organ powered Pretty Little Thing sounds as if it’s been inspired by the Rolling Stones. There’s also a nod to the Caretakers Of Deception who also feature on Keb Darge and Cut Chemist Present Darkside: 30 Sixties Garage, Punk and Pysch Monsters.When Pretty Little Thing was released on the short-lived Los Angles’ label Blue-Fin Records in August 1966, the Rolling Stones had made their mark on American music.  Sadly, when The Deepest Blue released this storming slice of garage rock, it failed to find an auoence and proved to be their only single.

Two years after forming in Dallas, Texas, The Gentlemen released what proved to be their one and only single You Can’t Be True in December 1966. That might not have been the case had The Gentlemen chosen to release the B-Side It’s A Cry’n Shame. This Tom Brown production is a far superior song, and showcases a much heavier sound. It’s a fusion of garage and proto-punk, that may, to some extent, have been influenced sonically and stylistically by fellow Texans, the 13th Floor Elevators.

Captain Crunch and The Crew were formed in Drayton, Ohio in 1967 and were only together until 1968. However, they found time to release Nowadays People as a single on the Wildwood label. It’s a garage-psych-rock hidden gem, and is a welcome addition to Keb Darge and Cut Chemist Present Darkside: 30 Sixties Garage, Punk and Pysch Monsters.

One of the Cut Chemist’s best choices is If I Could which was the B-Side to The Mach V’s only single Want To Stay. It was released in December 1967, on the Associated Artists label, which was based in Hendersonville, Tennessee. This makes sense, as The Mach V were from Savannah, Georgia. The organ driven psychedelia of If I Could is two majestic minutes of music which if you want a copy of the orginal, will cost in excess of £300.

Another group who released just one single, was the Young Aristocracy. They were formed in Tulsa, Oklahoma and released Don’t Lie in February 1967, on the Acropolis Record Company. This is another rarity, that will cost upwards of £150 for a copy. Hidden away on the B-Side is Look And See! It was written by Roger Burkitt and produced by Stephen Barncard who later, would work with The Grateful Dead, David Crosby, New Riders Of The Purple Sage and The Doobie Brothers. Stephen Barncard was at the start of his production career when he produced Look And See! He brings the drums to the front of the mix, where they drive the arrangement along, and plays its part in a lysergic, melodic and memorable song that could’ve only been produced in the late-sixties.

The Savoys were formed in San Diego, in the mid-sixties, and released a handful of singles. This includes a cover of So What which was written by Christopher Gaylord and produced by Don Ralke at Gold Star Studios in Los Angeles. It’s a defiant slice of garage rock featuring the vocal talents of Ray Clearwater a.k.a. Christopher Gaylord.

Another of the bands that only featured one single, are The Dogs. They released Don’t Try To Help Me on the Pennsylvania based Treasure label in 1967. It was penned by John Bowie, and features a despairing vocal on this garage rock hidden gem.

The Omens were a garage band formed byfive teenagers from Hammond, Indiana. They released Searching as a single on the Chicago based Cody label in July 1966. Searching was written by vocalist and guitarist Don Revercomb with bassist Larry Allen. Along with drummer Tim Jones, they drive the arrangement to this memorable anthem along. Sadly, it failed to find an audience upon its release, and makes a welcome return on Keb Darge and Cut Chemist Present Darkside: 30 Sixties Garage, Punk and Pysch Monsters.

Joining the list of bands that released just one single, are The Chants a Dallas based garage band. Their one and only single was Hypnotized, which was penned by David Norfleet and released on the B. Ware label in 1966. It’s a blistering, memorable and melodic slice of garage rock that’s: “sure to put a spell on you.”

The Spades were a Florida based garage band who released I’m Alright on Ace Records in 1965. It’s a real rarity, and is much in demand by collectors. No wonder, given the quality of I’m Alright where garage meets proto-punk on this hidden gem.

In August 1965, The Avantes released what was their one and only single, Baby Go. It was penned by Kerry Gremp, and released on the short-lived Avant Records which it seems, was founded just to release Baby Go. Avant Records only pressed  only a limited amount of copies of Baby Go and very few copies of this mellow sounding tale of hurt and heartbreak are still in existence. The remaining copies of Baby Go are now highly prized amongst collectors. So the addition of Baby Go to Keb Darge and Cut Chemist Present Darkside: 30 Sixties Garage, Punk and Pysch Monsters allows a much wider audience to discover the delights of this long forgotten single.

It’s The Blue Velvets, who were founded in Leawood, Kansas that close Keb Darge and Cut Chemist Present Darkside: 30 Sixties Garage, Punk and Pysch Monsters with Don’t Leave Me This Way. It was released in 1965, on the Damon label, which was setup to release singles recorded at the Damon Recording Studio in Kansas City. Only 500 copies of Don’t Leave Me This Way were pressed and nowadays this garage gem is highly prized among collectors.

For anyone wanting an introduction to garage, then Keb Darge and Cut Chemist Present Darkside: 30 Sixties Garage, Punk and Pysch Monsters is the perfect starting place. It features a mixture of familiar faces, obscurities, rarities and hidden gems chosen by Keb Darge and Cut Chemist. They chose fifteen songs each, which are the perfect introduction to the sixties garage music. This could prove to be the first step on a voyage of discovery into the world of sixties garage music. 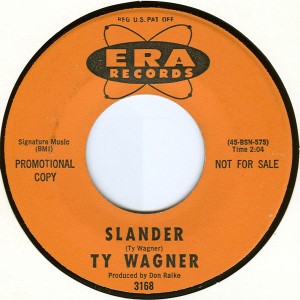 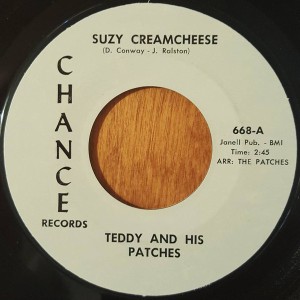 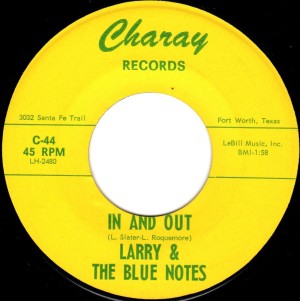 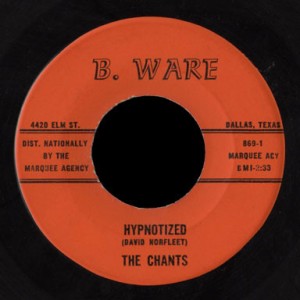