Fast forward fifteen years, and The Souljazz Orchestra are still together and are one of the leading lights of the Canadian music scene. They’ve been  nominated for three Juno Awards in their native Canada, and have just released their seventh album Under Burning Skies on Strut Records and have just embarked on their 2017 Autumn Tour.

Music fans in Britain, Belgium, Denmark, France, Germany, Greece, Sweden, Switzerland and later Canada will witness The Souljazz Orchestra taking to the stage, and unleashing their inimitable sound. It comes courtesy of blazing horns, vintage keyboards, a myriad of percussion and a pulsating rhythm section that provides The Souljazz Orchestra’s heartbeat. In full flow, The Souljazz Orchestra is an irresistible and impressive sound that has won over music fans across the globe. That has been the case since 2002.

So was their genre-melting third album Manifesto, which was released by Do Right! Music in 2008. Manifesto was captivating and powerful album full of social comment. Critics called Manifesto the finest album of The Souljazz Orchestra’s career. It was also their swan-song for Do Right! Music.

When The Souljazz Orchestra returned with their fourth album Rising Sun in 2010, they had signed to Strut Records, which has been their home ever since.

There were further celebrations when Solidarity was nominated for a Juno Award for the World Music Album of the Year. This was the second time The Souljazz Orchestra had been nominated for a Juno. Sadly, it was another disappointment for the Ottawa based musical collective.

When Inner Fire was released in 2014, it was a compelling fusion of musical influences and genres. Inner Fire had been clearly influenced by the master musicians the members of The Souljazz Orchestra worked with. They absorbed musical influences like a sponge, and they played their part in what was a musical melting pot. It was given a stir by The Souljazz Orchestra, and the result was a tantalising and tasty dish that was one of the finest the Ottawa based collective had cooked.

Although The Souljazz Orchestra had just released one of the finest albums in 2014, they were determined not to make the same album twice. Instead, the members of The Souljazz Orchestra were determined to introduce new musical genres and influences as work began on Resistance, Pierre Chrétien explained: “we approached this album with a fresh ear. We were keen to build on the band’s sound and message, so I brought in some of the French Caribbean and Francophone West African influences that I’ve loved since my youth.”

Opening Under Burning Skies is Dog Eat Dog where The Souljazz Orchestra set their sights on the powerful and corrupt. This they do against a backdrop of hissing hi-hats, shimmering keyboards and soon, blazing horns. Meanwhile, the rhythm section provide the heartbeat to this infectious Afro-disco groove. By now, the song is building and revealing its secrets. When the horns drop out at 2.45, the keyboards briefly set the scene for a rueful vocal. It’s sung in a catchy call and response style, reflecting that: “it’s a Dog Eat Dog world out there.” Joining the soulful vocal and harmonies are a chiming guitar, percussion and keyboards, as the rhythm section drive this seven minute Afro-disco opus along. They play their part in the sound and success of this hook-laden and dance-floor filler.

Although understated describes the introduction to Oublier Pour Un Jour, it’s soon starts to build and reveal its secrets. What follows is a mid-tempo track where The Souljazz Orchestra’s rhythm and horn sections combine with percussion, banks of keyboard, soulful harmonies and an accordion. It adds to the French Caribbean influence and plays a leading role in parts of the arrangement. Fingers fly up and down the keyboard as another virtuoso performance takes shape. Meanwhile, elements of soul, jazz and funk can be heard as The Souljazz Orchestra hone another carefully crafted and beautiful genre-melting track.

As Under Burning Skies unfolds, the rhythm section and chirping guitar are joined by braying horns on another mid-tempo track. It’s almost languid before the arrangement builds, and a pouring drum signals it’s all change. The tempo rises and takes a few twists and turns before a sultry saxophone emerges from the arrangement. It’s played with power and passion as it scorching sound soars above the arrangement. Soon, the arrangement becomes understated before rebuilding and before long, The Souljazz Orchestra is in full flight. This is an impressive and memorable sound during this ruminative sounding track that invites reflection.

Drums pound and are joined by a vampish vocal as Holla Holla bursts into life. Soon, the bass, scorching horns and vintage synths join keyboards and that vampish vocal. It’s joined by harmonies, as the horns play leading role as the arrangement builds. Percussion interjects before the baton passes to the searing, braying horns and harmonies. Later, squelchy eighties synths add a boogie influence to this irresistible track where the hooks haven’t been spared.

Synths rasp, while and buzz on Adawe Boogie and join percussion, horns and the rhythm section. By then, eighties boogie and funk are combining with jazz. Soon, the horns are playing a lead role in another incredibly catchy and dance-floor friendly instrumental. Later, the synths and the funky rhythm section play their part in the sound and success of Adawe Boogie. It features The Souljazz Orchestra in full flight and putting fifteen years of experience to good use.

There’s a party atmosphere as Sorrow Fly Away unfolds. It sounds as if the party is happening in the studio as the rhythm section and synth unite. Meanwhile, a vampish vocal interjects as boogie synths join the rhythm section, blazing and keyboards. They provide the accompaniment for a rueful, soulful female vocal. A hint of reverb has been added to the vocal, while squelchy synths join growling horns and the rhythm section who anchor the arrangement. Later, a flute replaces the vocal and briefly enjoys its moment in the sun as the arrangement sashays along. This continues when the vocal returns, and this joyous, uplifting song reveals the rest of its secrets.

The Souljazz Orchestra revisits French Caribbean music on Tambou À Deux Peaux. Blazing horns enter before the rhythm section  interject, and the arrangement pauses. This happens twice before the mid-tempo arrangement unfolds. Meanwhile, the vocal is sung in a call and response style, while horns bray and blaze as the arrangement swings. Providing the heartbeat is drums which are augmented by percussion and a drum machine that clicks and cracks. It has a  dubby sound, as if reverb has been added. However, it’s true horns that again, play a leading role in The Souljazz Orchestra’s inimitable and chameleon like sound. Not content to reinvent themselves from album to album, they reinvent themselves from track to track and show another side to their music.

Closing Under Burning Skies is Aduna Jarul Naawo which features vocalist Élage Mbaye. Their vocal is joined by bursts of quivering guitar, thunderous bass drum and percussion. Meanwhile, a guitar meanders across the arrangement as horns bray and blaze. When they drop out, this leave room for an impassioned vocal and harmonies. Soon, the horns return and later, a sultry saxophone accompanies a heartfelt vocal. Briefly the saxophone drops out, but returns and joins with the harmonies, drum, percussion and guitar. Together, they create a beautiful, soulful and soul-baring ballad then ensures the Under Burning Skies closes on a high.

The Souljazz Orchestra is like a fine wine and improves with age. They celebrate their fifteenth anniversary with the release of their seventh album Under Burning Skies on Strut Records, It’s without doubt the finest album of The Souljazz Orchestra’s career. This is something that has been said before. However, with every album the Ottawa based musical collective reach new heights.

What makes the rise and rise of The Souljazz Orchestra even more remarkable is their decision to eschew the latest musical equipment, and instead, use an eclectic selection of instruments. Many of these are instruments are long-lost, sometimes unloved junk shop finds. This doesn’t matter, as The Souljazz Orchestra is capable of creating incredible music with these instruments. That is the case on Under Burning Skies.

Hooks haven’t been spared during Under Burning Skies, where the music veers between beautiful, joyous and uplifting to ruminative and thoughtful right through to funky, soulful and dance-floor friendly. Many of the tracks are irresistible, and the listener is hooked from the opening bars. That is the case throughout The Souljazz Orchestra’s latest musical adventure. 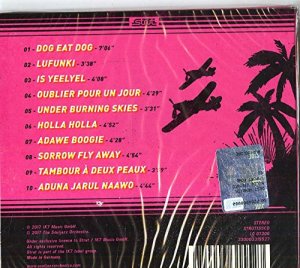