Although George Clinton was born in Kannapolis, North Carolina in 1941, he grew up in New Jersey, where he formed the doo wop quintet The Parliaments in the late fifties, whilst straightening hair at a barber salon in Plainfield he co-owned. George Clinton became the leader and manager of The Parliaments who entertained customers in the barber shop. This was good practice for The Parliaments, as they honed their sound.

The Parliaments released their debut single Poor Willie in June 1959, and as the fifties gave way to the sixties, George Clinton’s group had honed a sound that fused elements of soul and funk with increasingly bizarre and surreal lyrics. Initially, this didn’t find favour with record buyers, despite The Parliaments constantly switching between record labels. Still, though, a hit single continued to elude The Parliaments.

By 1967, George Clinton had been living and working in Detroit for some time, and for a while, was a staff songwriter at Motown. He had also arranged and produced numerous singles for other independent labels in Detroit. However, still The Parliaments hadn’t made a breakthrough.

This was about to change when The Parliaments released I Wanna Testify in May 1967 on the Detroit-based label Revilot Records. It reached  number twenty on the US Billboard 100 and three on the US R&B charts. At last, The Parliaments had enjoyed a hit single, and it looked as if this was the breakthrough that they had been working towards.

It may well have been if Revilot Records weren’t forced to file for bankruptcy. This lead to The Parliaments becoming embroiled in  a contractual dispute which lead to the band losing the rights to the name “The Parliaments.”  For a band that had just enjoyed the biggest hit of their career, this was a disaster,

Despite the disappointment of being unable to use the name “The Parliaments,” George Clinton dusted himself down and renamed the group Funkadelic, which was coined by bassist Billy Bass Nelson. This allowed the newly named Funkadelic to continue to record for other labels.

George Clinton decided that Funkadelic would be a funk-rock band, which featured five backing musicians and The Parliaments’ as uncredited guest artists. This would be the lineup of Funkadelic that featured on their debut albums which was released on Westbound Records.

On May the ‘11th’ 1970, Funkadelic released their genre-melting eponymous debut album, which fused blues-tinged acid rock,  lysergic space funk and conventional soul songs whose sound hinted at Stax and even Motown influences. It was an innovative and imaginative debut album that showcased what George Clinton and the rest of Funkadelic were capable of. Funkadelic found favour with critics, and reached 126 in the US Billboard 200 and eight in the US R&B Charts. This was a solid start to Funkadelic’s career.

Two months later, Westbound Records released Funkadelic’s sophomore album Free Your Mind…and Your Ass Will Follow on July the ’20th’ 1970. George Clinton later claimed that the album was an attempt to record an entire album whilst tripping on LSD. The result was an album of cerebral, funky space-rock which was meant to deal with the subversion of Christian themes. However, some critics thought the album was designed to promote and inspire escapist utopianism and to seek liberation from the mundane reality of everyday life. Despite the debate about Free Your Mind…and Your Ass Will Follow’s message, it was well received by critics and reached ninety-two on the US Billboard 200 and eleven on the US R&B charts. Funkadelic’s popularity was already growing, and they would one of the most successful funk groups of the seventies.

Especially in Detroit, which was home to both Parliament and Funkadelic. Their music was a source of inspiration to local producers and remixers over the past five decades. Recently, some of the Detroit-based producers and remixes got the opportunity to remix some of Funkadelic’s genre-melting music. They reimagined and reinvented seventeen of Funkadelic’s tracks on Funkadelic Remixed By Dettroiters, which was recently released as a two CD set by Westbound Records, an imprint of Ace Records.

Given how much of an influence Funkadelic’s music has had on Detroit’s musicians, producers and remixers, it’s no surprise that everyone involved in the Funkadelic Remixed By Dettroiters project was fully committed to playing their part in this homage to a truly groundbreaking group.

Funkadelic had their own inimitable, unique, genre-melting sound which they combined with social comment and often, their off-the-wall humour. This featured on eighteen studio albums and one live album. With such an impressive back-catalogue, the various musicians, producers and remixers had plenty of music to choose from for their contribution to Funkadelic Remixed By Dettroiters. Some opted for familiar songs, while others eschewed the obvious and dug deeper into Funkadelic’s back-catalogue for this seventeen song, two disc set. It’s full of highlights aplenty.

Opening disc one was the Recloose Disco Flip of Sexy Ways which was a track from Funkadelic’s 1974 album Standing on the Verge of Getting It On. DJ and remixer Matthew “Recloose” Chicoine has reinvented the original three-minute song into a nine minute disco epic that is guaranteed to fill any dancefloor.

Anton Miller reimagines You Can’t Miss What You Can’t Measure which featured on Funkadelic 1973 album Cosmic Slop. What was three-minute song is modernised and takes on a Latin influence. Still, though, the vocals which played an important part in the sound and success of the original song still take centre-stage.

Without doubt, Moodyman’s Mix of Cosmic Slop, which is the title-track to Funkadelic’s 1973 album is one of the highlights of Funkadelic Remixed By Dettroiters. The original song is transformed by occasionally dropping drums out for the first two minutes. This allows the bass to prowl while searing guitars and harmonies combine. Later, when the vocal enters Amp Fiddlers adds keyboards which adds to this masterful reinvention of Cosmic Slop.

While most of the tracks on Funkadelic Remixed By Dettroiters are remixes, Undisco Kidd was edited by Gay Marvine. For an  edit, a producer doesn’t necessary need the original stems of the song. Undisco Kidd featured on Funkadelic’s eighth album Tales Of Kidd Funkadelic which was released in 1976. Comparing the edit to the original version of Undisco Kidd, it seems that Gay Marvine has increased the tempo by around twenty percent and in doing so, the song becomes a disco anthem, as Funkadelic reach 127 disco seven.

Detroit rockers The Dirtbombs cover Super Stupid from Funkadelic’s third album Maggot Brain, which was released in 1970. Forty-seven years later, The Dirtbombs unleash an imaginative and über rocky remake where they strut their way through Super Stupid. The result is one of the best covers of a Funkadelic song ever recorded by a rock band.

Amp Fiddler is regarded as a musical legend in Detroit, and has been around the local music scene for four decades. Sadly, many music fans in other parts of the world have yet to discover the delights of Amp Fiddler’s music. That is a great shame as he’s a truly talented singer, songwriter, musician and producer. He remixed the title-track Funkadelic’s 1975 album Let’s Take It To The Stage. It features George Clinton’s trademark humour as wryly comments on Sly Stone and the self-styled Godfather of Funk James Brown. In Amp Fiddler’s hands, the song that was originally 3.32 is transformed into a six-minute groove-a-licious jam. This allows the listener to enjoyed one of the deepest and funkiest grooves on the compilation.

Each and every producer and remixer that contributed to Funkadelic Remixed By Dettroiters took a different approach.  Claude Young Jr was no different, when he remixed You And Your Folks which featured on Maggot Brian in 1971. He took the original stems and took the track in the direction of dub. However, it subtly done and he doesn’t drown the blistering guitar solo or harmonies in effects. Instead, Claude Young Jr takes a less in more approach to effects, and in doing so, produces a memorable remix that reinvents what was one of the highlights of Maggot Brian.

Looking Back At You was recorded by Funkadelic, but never released, and has lain unloved in the Westbound Records’ vaults. That was Ectomorph decided to remix this long-lots track. The version that Ectomorph chose for his Stripped And Dubbed remix was a demo version. It’s been stripped bare, with just the reggae rhythms and Moog synth creating a loose, dubby, lysergic sound on this remix of a hidden gem.

The BMG Dub of Maggot Brain closes Funkadelic Reworked By Detroiters. For the remix, BMG chose an Alternate Take which was first heard on a reissue of Maggot. It forms the basis for a ten minute remix of this epic cosmic jam. BMG take a minimalist approach, removing some instruments from the mix, and reduce the influence of the others. However, Eddie Hazel’s guitar plays a starring role as it soars above an arrangement that is variously dreamy and dubby to futuristic, otherworldly and sometimes lysergic. As is often the case, one of the best tracks has been kept until last.

Nowadays, Funkadelic is regarded as one of the most important, innovative and influential funk bands. Their music has inspired and    influenced several generation of musicians, including the producers, remixer and bands that contributed to, or featured on Funkadelic Reworked By Detroiters. It was recently released as a two CD set by Westbound Records, an imprint of Ace Records, and is also available as three LP set.

For anyone whose a fan of Funkadelic, or anyone who appreciates and enjoys good music, Funkadelic Reworked By Detroiters is an opportunity to discover some of the Detroit’s top producers and remixers reinventing and reimagining seventeen tracks from George Clinton and Co. These remixers take the tracks in new directions, as they deconstruct and then reconstruct seventeen tracks from Funkadelic’s back-catalogue. This includes singles, familiar songs, deep album cuts, an alternate take and even an unreleased song. They’re all part of Funkadelic Reworked By Detroiters, which is a lovingly curated compilation that is a fitting homage to Funkadelic, an innovative and influential band who have inspired several generations of musicians and producer over the past five decades with their genre-melting music. 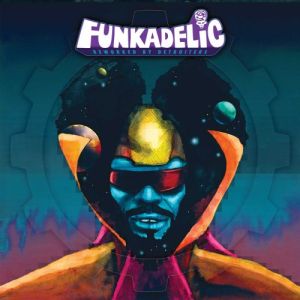