It was thirty years ago in 1988, when Alex Attias decided to embark upon a career as a DJ in his home city of Lausanne, Switzerland, and began playing an eclectic selection of dancefloor friendly music.  Alex Attias friends weren’t surprised by his decision to become a DJ, as has always been interested in music, and spent much of his time crate digging and searching for oft-overlooked hidden gems to add to his  impressive and enviable collection of vinyl. These hidden gems became part of Alex Attias’ DJ sets, which featured everything from funk, house and jazz which proved popular with dancers. However, this was the first chapter in the Alex Attias’ story.

Having spent several years establishing himself as one of Europe’s leading DJs, the next logical step for Alex Attias was to start producing his own music. In 1996, Alex Attias and Seb Kohler released Magik which was the first of several singles the pair released as the Bel-Air Project.

After this, Alex Attias collaborated with Paul Martin, and their new musical vehicle Beatless released its debut single To Expand in 1997. This was the start of a successful collaboration between the pair that lasted several years.

By 1997, Alex Attias had left his home in Lausanne, and was now living in London, where he had just founded a new record label, Visions. Little did he know that he and the nascent label would be at the heart of the emerging West London Broken Beat scene which emerged around his studio at Goya.

In 1999, Alex Attias had dawned the moniker Catalyst and released the single Silly Games [Part 1]. It became a dancefloor favourite, and Alex Attias was now a successful DJ, producer and record label owner. However, he was keen to add another string to his bow.

This came about when Alex Attias was asked to compile a compilation of jazz by the Italian record label Irma. Alex Attias put his crate-digging skills to good use and the result was Presents Quiet Moments which was released in 2000. This was the first of several compilations Alex Attias would go on to compile.

Another track from 2016 is Tatham Mensah Lord and Ranks Cascade which was released on the 2000 Black label. It’s a Dennis McFarlane production and is what Alex Attias describes as: ”a boogie jazz funk disco number, London style,” and is guaranteed to fill any dancefloor”

In July 2017, Cotonete released the 12” single Earth Overshoot Day on the Heavenly Sweetness label. One of the tracks was the Hugo LX Remix, where he reimagines Earth Overshoot Day and transforms this original jazz-funk track into a dancefloor filler.

When Japanese band Cro-Magnon released their album Joints on the Lastrum label in December 2010, one of the highlights was Midnight Magic which features the legendary vibes man and vocalist Roy Ayers. The seventy year old plays a starring role on vibes and vocal on this irresistible track that is melodic and memorable.

In 1980, British jazz-funk group Freeez released Stay on the Pink Rythm label. It’s a soulful slice of jazz-funk and a tantalising taste of what was to come from a group who went on to release a string of successful singles including IOU and Southern Freeze.

DJ and producer from Grooveman Spot, from Tokyo, in Japan, released the Runnin’ Pizza EP 1 in 2011. On the B-Side was Do The Dance a moody, mesmeric and futuristic broken beat track  were a myriad of beeps and squeaks hint at Acid House.

When Root Soul was recording his debut album, Album Sampler he was joined by various guest artists, including Leon King who added the vocals on My Dreams Came True. It’s funky and soulful  and was one of the highlights of Album Sampler which was released on Geneon Universal, in Universal 2009. Nearly nine years later, and My Dreams Came True makes a welcome return on Alex Attias Presents LillyGood Party.

Another welcome addition is Kip Hanrahan’s Her Boyfriend Assesses His Value and Pleads His Case which featured on his 1983 sophomore album Desire Develops An Edge. It was released on Kip Hanrahan’s American Clavé label and is the perfect introduction to this groundbreaking musician. He uses Afro-Cuban percussion which provides a backdrop to his soul-baring vocal on this hidden gem that is the perfect introduction to Kip Hanrahan.

Nicole Willis career as a singer-songwriter began in New York in 1984, when she was a member of Blue Period and The Hello Strangers. This was the start of a four decade career that has seen her work with The The, Curtis Mayfield and Repercussions. However, in 2001, Nicole Willis added the vocals on the house 12” single Curiosity which was released on the Finnish label Puu. It featured the Zanzibar Remix which is deep and sometimes techy as Nicole Willis becomes and embraces her newfound role as house diva.

By 1977, disco at the peak of its popularity on both sides of the Atlantic, and many soul and funk artists were jumping onboard the disco bandwagon. Andre  Williams recorded several disco tracks in Chicago with the band Williamsput. Rather than release the tracks under their own names, they called the collaboration Velvet Hammer, who released Party Hardy on the short-lived Chicago-based label Soozi Records. Velvet Hammer’s finest hour was Party Hardy which is a delicious fusion of soul, funk and disco that has been edited by Alex Attias for the compilation.

One of the most unlikely collaborations of 1981 was between Material and futuristic disco funk diva Nona Hendryx. They recorded Over and Over which was released on the Celluloid label, and billed as Material With Nona Hendryx. It’s a genre-melting single where everything from boogie, electro, funk, rock and soul are combined to create unlikely dancefloor filler.

Sunaga T Experience released the 12’ singe It’s You on the Japanese label Afters Or Records in 2000. It featured the slow burning Disco Alert Mix which is another track that is often found in Alex Attias’ DJ box. Gradually, it reveals its secrets and reaches a crescent after six magical minutes.

For anyone whose yet to attend one of Alex Attias’ LillyGood Party in Lausanne, Switzerland or hear his radio show of the same name, then his forthcoming compilation Alex Attias Presents LillyGood Party is the next best thing. This carefully curated thirteen track compilation is akin to one of Alex Attias’ DJ sets and features an eclectic selection of tracks including funk, disco, boogie, broken beat and spiritual jazz. There’s singles, B-Sides, album cuts, remixes, rarities, edits and hidden gens on Alex Attias Presents LillyGood Party which will be released on BBE Music, on the ’11th’ May 2018 and is guaranteed to get any party started. 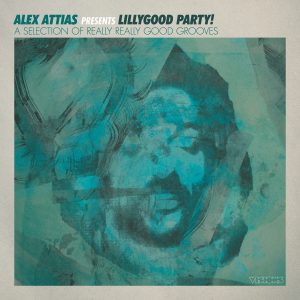